After winning Race 2 of the FIA Formula 3 Championship at Barcelona, Jehan Daruvala took a second straight win, with victory at Race 1 at Paul Ricard. The Indian driver's win sees him move up to second in the championship standings. 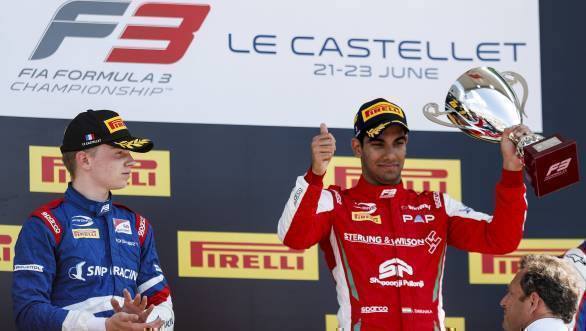 Jehan began the weekend well, finishing fourth in the practice session. He managed to put in a strong qualifying session too, only losing out on pole by eight hundredths of a second to Jake Hughes. This meant that the Prema driver lined up second on the grid for the race. When the race started, Jehan didn't manage a good start. He ended up falling to third, with Pedro Piquet managing to get past him. But, within a few laps, Jehan had managed to retake the position. By this time, Hughes had already opened up a gap of over 2 seconds to Jehan. Daruvala put in some very fast laps, came within DRS range of the car ahead of him, and made an incisive move down the inside of the race leader. He came from four car lengths behind, took the lead, and managed to keep Hughes behind him. From that moment on, Daruvala was consistently quicker, and also opened up the gap to the chasing drivers. He ended up crossing the chequered flag 2.8 seconds ahead of his team-mate Robert Shwartzman, while Piquet finished third. 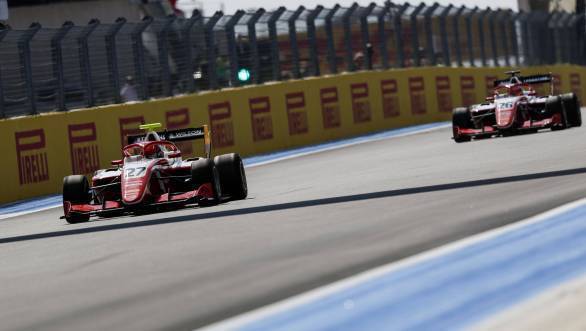 "I'm really happy for today's result as the pace was extremely good throughout the whole race. At the start, I didn't go off the line as I would have liked to, but I did not need to over push, I tried to stay in the DRS zone of Pedro and I got the job done on the first lap of DRS. Then I started hunting Jake. At the beginning I was just recovering a couple of tenths here and there, I tried not to push too much and stay in pace. In sector 3 I was strong compared to him. When I got in the DRS zone I managed to get him before the last corner and had the DRS on the main straight. I have been good in sector 3 for the whole week so I knew that if I could hold him off, I would have the chance to pull away and it went according to plan. After that, the car was as good as it could be and I could manage the gap." Said Jehan after the race. Due to the reverse grid, Jehan will start the second race of the weekend in eighth place.