On the one hand there's the sun, the sand and the sea. And on the other, there's blood, sweat and tears. And this is just the beginning of the dichotomy one can witness in Marmaris where the World Rally Championship has touched down after an eight-year hiatus from Turkey. There are tourists and backpackers, wandering about in leisure, with nary a care in the world. In stark contrast, of course, to everyone involved in the rally, where the clock rules absolutely every move, from the speed at which the drivers tackle each corner, to the speed with which the mechanics must wield their hammers to ensure that they manage to finish flexi service within the 45-minute time frame. And while there are sailboats bobbing along in the Turkish Riviera, many of which have elements of luxury on board, the rally cars that go flying through the stages in Turkey are stripped bare of the non-essential. Every bit and bob is vital, every part on the car critical to being successful in the world of top-flight rallying. 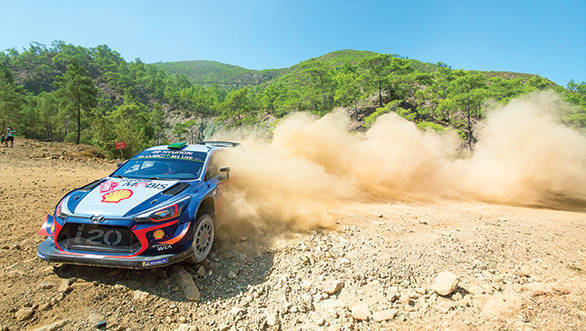 I'm at the service park, watching various cars come in, and head straight into the garage, where flexi service is being carried out. The Hyundai crew is busy working on rally leader Thierry Neuville's car. The Belgian driver has ended the day with a very slim 0.3 second lead over title rival Sebastien Ogier. And, with two days remaining in the rally, there's still absolutely no guarantee as to what will happen. After all, predicting the outcome of a rally before every single stage is over is impossible. More so at Turkey, because it turns out the stages are rough. The rally is the slowest one of the entire season, because with the tight, twisty, technical sections, and the massive rocks that are being thrown up onto the stage with every single car that goes by, things become more and more challenging for the following cars. Hyundai WRT's team principal, Michel Nandan says that the stages in Turkey are more difficult than stages in Argentina or Portugal. And he's fairly certain that "this generation of driver hasn't driven in these conditions before." 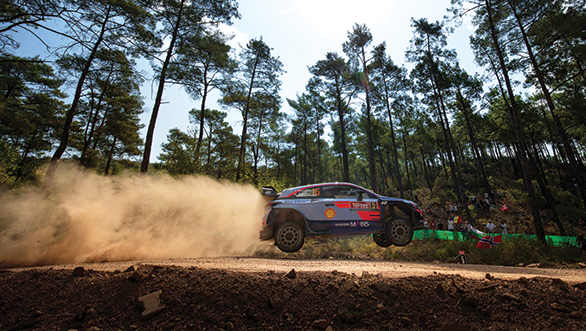 Thierry Neuville yumps the Hyundai WRT at Rally Turkey. Unfortunately, the Frenchman did not complete the rally, and had his lead in the championship standings cut down rather a lot

Which means 30-year old Neuville and 29-year old Mikkelsen have their work cut out for them. The team's two full-season drivers are who Hyundai has pinned their hopes on. Neuville is the one leading the 2018 championship, having missed out on the title in 2017 after a spate of mistakes and driving errors. This year, Nandan says the Belgian is a year older and wiser. And that has made all the difference. The team's third car is being piloted by New Zealander Hayden Paddon, who alternates with Dani Sordo for the 2018 season. It's his fifth outing in the WRC this year, and he'll be hoping for the best. His only win in the championship is now two years behind him already - Argentina, 2016. And he's had a particularly tough 2017, after he was involved in a crash that killed a spectator at Monte Carlo, after which he withdrew from the rally. A second-place at Poland, and a third-place at the season-finale in Australia were the high points of the season that followed. In 2018, Paddon has yet to make it onto the podium. And he's quick to acknowledge that the stages in Turkey are brutal. 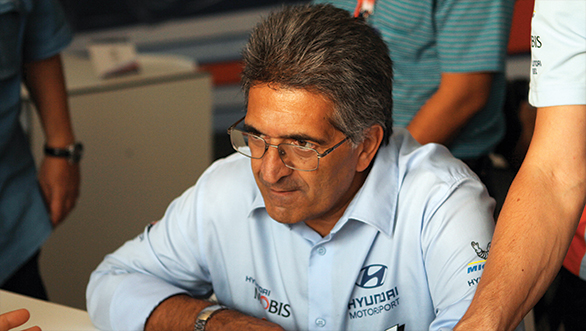 Hyundai's Michel Nandan said the team would certainly welcome more manufacturers to the WRC, however cost and promotion of the rallies was a key factor in attracting more entrants

"Probably the roughest rally of my life," he says when asked if the rally is the most brutal on the season calendar. There are big loose rocks on the stage, that are making the going very difficult indeed. And Paddon says that he's amazed at what a beating the i20 WRC, that he's driving, is capable of taking. Then there's the fact that the entire rally is a combination of needing to push, but also needing to play it safe. One wrong move, one bit too hard on the accelerator, and everything can come undone. These are stages where one simply has to be very neat and precise to get things right, he tells us, which is why he and co-driver Sebastian Marshall have decided to "be sensible" from the very beginning, sticking to their pacenotes. They've suffered a broken damper on the final stage on Friday, which hasn't helped matters and sees them down in sixth position overall. Still with hopes of getting better, of course. 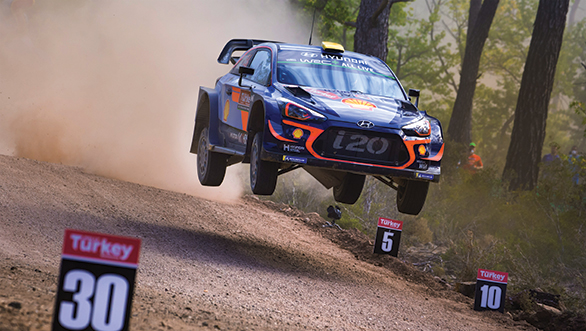 The next day, we get to witness just how rough the stages are. We're standing on a hill overlooking a hairpin bend at the Icmeler stage. The first few cars seem to have it easier. They aren't really cleaning the road for the competitors that follow, instead the more cars that go by, the more the track gets dug up, throwing dirt everywhere, and bringing rocks and stones right onto the path that following cars have to take. This is both the literal and metaphoric boulder that Rally Turkey has thrown in the way of the competitors. And slowly, yet surely, it becomes apparent that this is a rally of attrition. We see Seb Ogier go by on SS10, leading the rally. And soon after, there's a broken suspension that him and co-driver Julien Ingrassia have to spend time attempting to repair. It's both mentally and physically exhausting, but they manage to get the car back to the service park. But in the afternoon, Ogier is so knackered from the energy expended earlier that day, that he doesn't register a note his co-driver calls out to him, and ends up hitting a tree. It's a slow-speed crash at around 5kmph. It shouldn't matter. But this time it does. The ground is so soft that the car sinks right in and it's an early retirement for the duo. 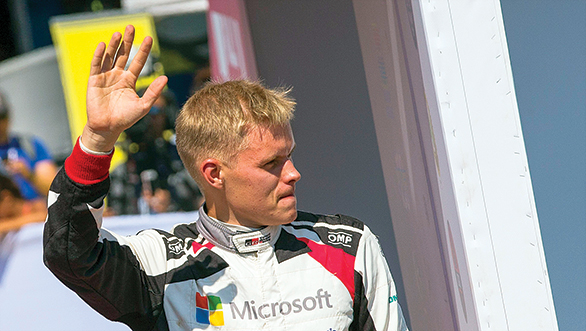 Meanwhile, Hyundai's Neuville and co-driver Nicolas Gilsoul have fallen prey to a broken suspension, ending their Saturday. It's thrown a spanner in the works of their championship hopes. Teammates Mikkelsen and co-driver Anders Jaeger, who had led the rally at three different points on the Friday, have had a mixed Saturday. They've managed to retake the rally lead on SS9, but have then dropped down to fifth overall after driveshaft trouble on the eleventh stage sees them struggle to keep going. 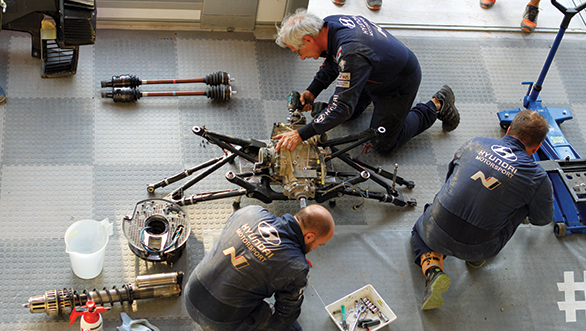 The Hyundai crew hard at work at the service at Marmaris

And so it falls to Paddon to lead the charge for the Hyundai team. Him and Marshall have stuck to the plan, driving sensibly. But like he says, the rally has changed considerably. At the end of the Friday, Paddon said of the tyres, "We only had one tiny puncture on the last stage. And towards the end our tyres were quite bald, but the Michelins seemed to be working quite well." But on the Saturday of the rally, it becomes evident why Michelin increased their per car tyre allotment from 24 to 28. "It's been much more loose and particularly tough on the tyres. In the afternoon loop, we had to take it a bit steady towards the end because our tyres were practically bald. I have learned my lessons from previous rallies, where we've gone out too fast, too early and ended up by the side of the road," Paddon says. The steady approach seems to have paid off, and he finds himself third overall, behind the two Toyotas of Ott Tanak and Jari-Matti Latvala. On Sunday, the overall ranking remains unchanged with Tanak ultimately winning the rally, Latvala finishing second, and Paddon making it to third place. It's his first podium of the 2018 season and it's come, thanks to an approach that hasn't been entirely easy to follow. "We have adopted a particular strategy this weekend that has required us to hold back and be patient." 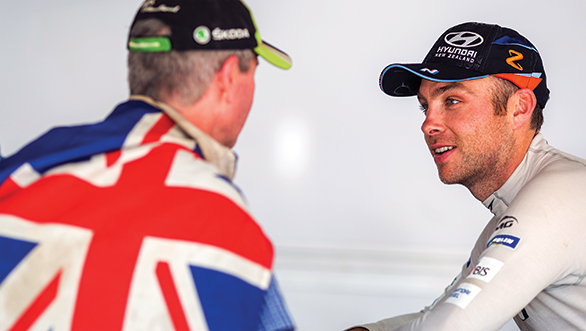 Paddon talking to a rally fan at Rally Turkey

And it's Paddon's words about patience that I find sticking in my head after the rally is over. A certain tiny green being comes to my mind, who, in a very famous scene in a very famous movie says to his young protege, 'Patience you must have, my young Padawan'. That sentence works remarkably well if you swap out the "Padawan" for "Paddon". I find myself wondering who Paddon's version of the all-knowing Jedi Master could be. Possibly Peter "Possum" Bourne, who won the APRC three times and the Australian Rally Championship seven times, and who Paddon is said to having grown up idolising. And perhaps the late-great Colin McRae, of whom, he's said in the past, he's been a huge fan. 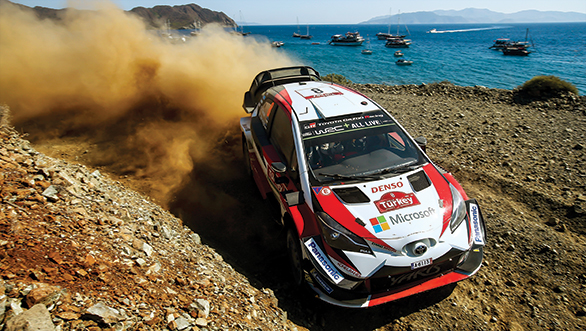 Unfortunately for me, I don't get to ask Paddon any of these questions, because I find myself in a mad dash to the airport. Fortunately I don't have to contend with any of Turkey's threatening gravel, just some well laid out tarmac. The view from the window of the car throws up many spectacular vistas of an idyllic beach town, and I can see people sunbathing on beach chairs in the distance. It seems as if there's nothing remotely hurried about Marmaris at all. And then, brraaaaaaap, a rally car goes by on a transport stage, shaking me out of my reverie, and reminding me that some of the town is still certainly governed by the clock.