What does the Blue Core tech in the new Yamaha FZ version 2.0 mean really?

Yamaha believes - as do the other Japanese companies - that the Indian customer's need for sportier, more exciting and stylish products exists without any compromise or backing off on the need for exceptional fuel economy. Yamaha R&D India's chief Toshikazu Kobayashi started from here as he went on to explain the Yamaha Blue Core technology at the launch of the new Yamaha FZ V2. 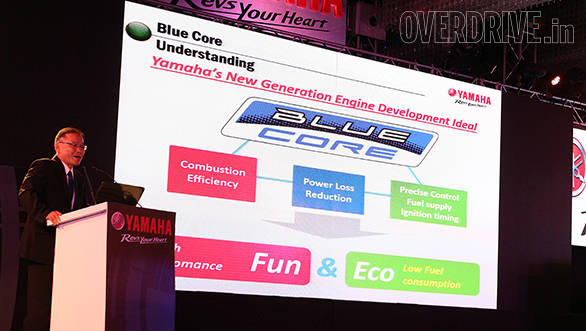 Blue Core, says Yamaha, is their "New Generation Engine Development Ideal." It suggests that you can have performance and those attributes, which the company broadly categorises as fun elements while enjoying low fuel consumption, which comes broadly in the Eco category. To drill down further, this means that the engine development must take care of combustion efficiency, loss of power and control fuel supply and ignition timing to maximise engine performance as well as economy.

Yamaha says that Blue Core as an idea will spread to all of its models and that does not mean that they will all be fuel injected, like the FZ is now either. Yamaha officials did mention that Blue Core is an international program though I've so far found only one reference to it outside of the new FZ coverage and that is to a 125cc scooter engine which uses Blue Core ideas as well.

In sum, Blue Core is a new set of guidelines for Yamaha R&D India to follow while developing or updating new engines which should result in more useable power (not necessarily more power), greater economy and cleaner tail pipe emissions (if they're not a direct product, they will be a side-effect because emission norms get tighter as time passes). The only concrete thing we've found on the Blue Core is that it guns for primary platform development rather than the use of assistive or supplementary technology like start-stop systems, electric assistance etc. If you notice, we've said a lot and there's very little substance to this Blue Core in terms of explanation so far. This is not a coincidence and it doesn't mean Blue Core is pure marketing either.

Yamaha is, in fact, the third Japanese manufacturer to have a term for engines that're better at both performance and economy. Honda debuted HET (Honda Eco Technology) with the Activa update a year ago while Suzuki has SEP (Suzuki Eco Performance). And if you look for detailed explanations, you'll realise that there isn't a clear, deeply technical one for HET or SEP either. Allow us to explain.

Blue Core, SEP and HET all talk about guidelines, for engine and frame development, that aim for lighter vehicle weight, high combustion efficiency (which has both performance and economy benefits) and the reduction in power losses (that's the power lost as heat or to friction during running operation). Since these guidelines apply to platforms and development, it is hard to be specific unless you're talking about a specific product that employs these guidelines and produces a tangible, or at least claimed, benefit. 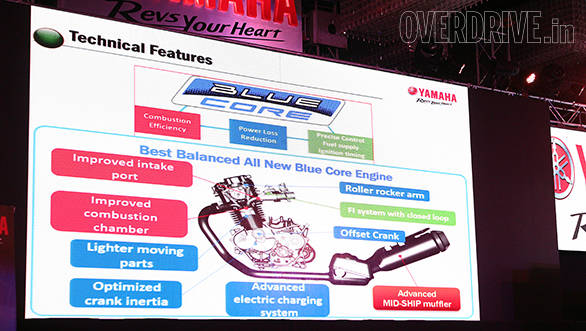 To return to the FZ V2, Yamaha say the process of redesigning the engine caused them to nearly create a brand new engine. In spec terms, the big difference is that the bore is marginally smaller while the stroke is the same. This gives the 4cc lower displacement of 149cc to the new FZ. A smaller displacement is perhaps directly linkable to the slightly lower overall power 13.1PS at 8,000rpm and the slightly lower overall torque 12.8Nm at 6,000rpm. This doesn't sound like an all-new engine until you realise that Yamaha saved 1.5kg in total from the engine alone in the new generation. It features a lighter crankshaft and a lighter piston (and hence the con-rod can be lighter as well). Lighter moving parts, again, means the engine has to consume less of its own power to keep moving while a smaller bore means the interface area between piston and cylinder wall reduces which is a small but probably valuable reduction in friction as well. Without giving specifics, Yamaha have also reworked the shape of the combustion chamber, retuned the intake port, altered the placement of the two valves for better overall combustion and the exhaust doesn't just look different, it is all-new. Elsewhere, Yamaha mentioned the roller rocker arm, lighter moving parts, optimised crankshaft inertia, an advanced electric charging system (which consumes much less power when the headlight is off, for instance) and the offset crank (the con-rod is parallel to the cylinder bore at TDC to eliminate any extra friction from the rocking motion of a non-offset crankshaft) as elements that cut power losses. Yamaha have not changed any of the gear ratios and the only variation is the change in the rear sprocket which is a 41-tooth cog now - the old one wears 40. 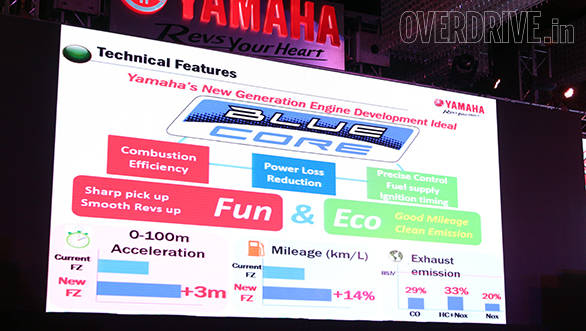 Yamaha says this gives the bike superior acceleration to 100kmph as well as 14 per cent better economy than the old FZ - which remains on sale and is being superseded but not replaced by the FZ V2. Yamaha also claim, less vocally, a 29 per cent cut in CO2 emissions, 33 per cent lower HC+NOx and 20 per cent lower NOx from the new engine. 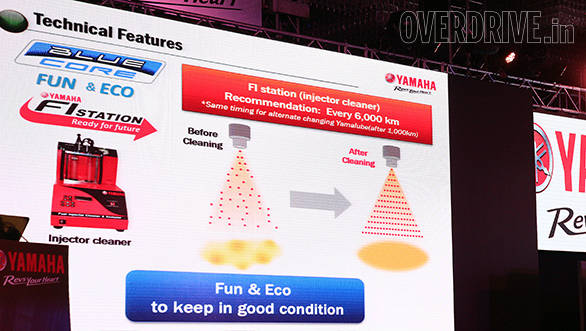 Yamaha say they're recommending a 6,000km interval for injector cleaning for best performance

The closed-loop fuel injection system is new and it has a role to play in the precision of fuelling as well but we wouldn't give it too much credit. Indian motorcycles, especially ones like the FZ that already offer a decent balance of power and economy while meeting emissions norms have to, by design, come with extremely efficient, well-tuned carburetion. The inherent gain from adding fuel injection in pure power or economy terms, therefore, is limited. That said, the FI system is sure to make the throttle response more crisp and the motorcycle's sensitivity to altitude changes much less. Yamaha say they're recommending a 6,000km interval for injector cleaning for best performance and that its service centres will have all the equipment they need for this. 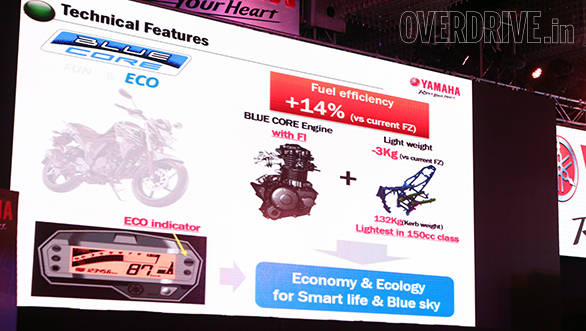 Yamaha developed a new chassis for the FZ which led to an over 1.5kg saving over the old FZ

The final part of Blue Core - though not directly attributed to it because it isn't an engine technology per se - is the new chassis. Yamaha developed a new chassis for the FZ which led to an over 1.5kg saving over the old FZ which makes the FZ, at 132kg (kerb), the lightest of the 150cc class bikes, says Yamaha. It is the combination of the weight savings from the engine and the frame that total up to nearly 3.5kg. As you know, weight savings improve economy and performance both immediately.

Yamaha will roll out this kind of all-pervasive tuning and redesign to its various platforms over time and you'll see the Blue Core logo appear in more places, probably with brand ambassador John Abraham pointing at you with a signature to certify some mysterious stamp of bolly-approval. But the point is that Yamaha is embarking (as, you can be sure, have Honda and Suzuki) on an R&D project that will result in engines that make similar or more power but not at the expense of economy. Yamaha clarified that the fuel injection system isn't naturally a part of the Blue Core though the ever-tightening emissions norms and steady drop in OEM fuel injection system prices should allow more and more two-wheelers to eschew carburettors.

You can read our first ride impressions of the new FZ here. 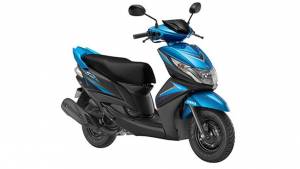