Ryuyo is a small place with a big name located close to Hamamatsu, Japan. It's where most Suzuki motorcycles are developed. There's an off-road track and a road course and it's a development centre not a racetrack. It's off-limits to everyone as a direct consequence. The place emits a daily series of evocative sounds that make you want to run and see what's being ridden. But you cannot.

But for this one day, I was allowed to. And as I sat in a numbered minivan waiting to enter the proving ground, I heard it coming. 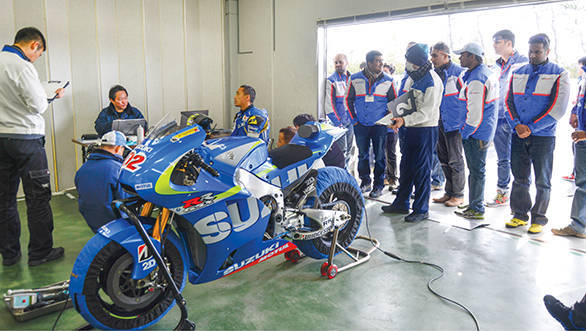 A distant roar of a very loud motorcycle approaching rapidly. Being surrounded by neat, ordered little buildings, there wasn't much I could see really. But then a blue flash streaked into sight and then out of it in half an instant. Its well-rounded roar spikes sharply and then ebbs angrily away. "Ah, that's Aoki San on the GSX-RR," said our affable Japanese host with a smile.

Moments later, we're standing outside the pits. Which is two rooms and a toilet. Room one has eight people inside. Two are wiping down the GSX-RR which sits calmly with its tyre warmers on. I try peeking under the skin but they've got it packaged very tight. Not even light can get past the plastic into the innards.

A man in a worn Suzuki cap is busy hammering away into two laptops from which snake thick cables connected to the GSX-RR, Suzuki's MotoGP motorcycle. Two others are clearly engineers. They listen carefully while scribbling into clipboards. The final two are wearing Suzuki's blue and fluoro-green leathers. Takuya Tsuda is a top Japanese racer who is part of the development programme. He isn't riding right now and he stands attentively to one side listening. 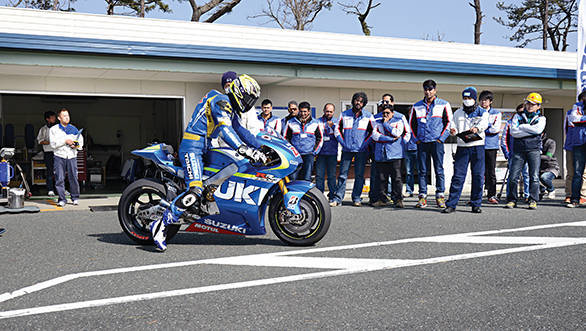 Talking right now is Nobuatsu Aoki, ex-MotoGP racer and current Suzuki GSX-RR development rider. Aoki San stands out in the room. For a person of Japanese origin he isn't a small guy though he's clearly very fit. On the other hand, his speed on the track is at dramatic odds with his speech. Since I don't speak Japanese, I'm not sure what the engineer is asking him. But his response is slow. He bows his head in thought. Then the words come in slow, considered sets. Hands move in that typical fashion as a motorcyclist relives a memory except that Aoki San is extracting sensations that the engineers can use to make the bike better. A far more precise thing than a recollection. It's fascinating to watch despite being entirely incomprehensible to me. 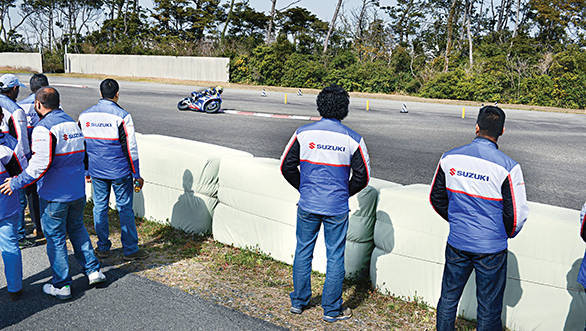 Five minutes later, the bike is rolled out into the sun again. It sits on the starter thingy while the mechanics wait for Aoki San to kit up and get on it. Just a moment before he's ready they fire it up. It's a precise, practised sequence executed by men who've done it many times and very often.

What a lovely sound the GSX-RR makes. It's terrifically loud and also very animated. There's no attempt to refine or quiet the sounds. You hear the airbox pressurising with a violent whine. Various things thunk into place and other stuff chatters as it rotates. And then the exhaust drowns all that with a steady baritone roar that makes fingers itch to plug ears. It's intensely mechanical and I swear it's alive! 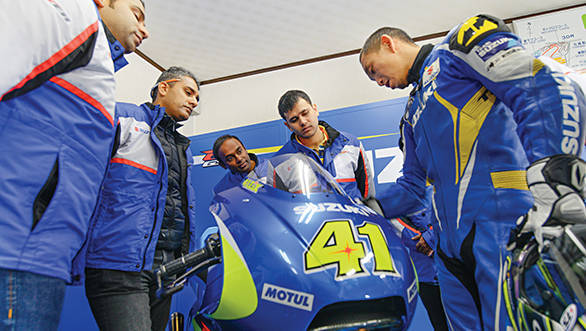 And then he's off. As we realised as the day wore on, the GSX-RR isn't a GSX-R1000. You don't hop on and ride away. Aoki spends the first two-three minutes of each stint setting up the bike. During which he's pressing buttons and the engine's making all manner of unhappy sounds.

But once he's done, that distant roar returns and settles around us. So dense and present that the hair standing up on your forearms can clearly touch it.

We get to watch Aoki run the test from three places on the track and it's stunning how relaxed he looks. Only once does he actually wave out to us but if there was ever a sense of what zen is, this was it. He had the same sense of peace and calm as a man reading a book at the beach with a drink with an umbrella in it in his hand.

We get to chat with him later in the day and ask him what he was up to. He smiles, "Low speed traction control." Ah, that makes sense. Aoki's been using only about half of Ryuyo's famously long straight and even in there they've got portable kerbs to make two chicanes in both directions.

Why are you short-shifting? We hear you exit the chicane, the front wheel comes up a bit, comes back down and bam, bam, bam you're up three gears... why? "When you have lots of power, it's not always needed to redline the motorcycle. So I shift up because anyway the straight is short and I lose no time from it." Again, the responses are quiet, considered and calm.

Which only encourages ever more intrusive questions to which the answers change from the smiling explanations to the smiling "No comments." 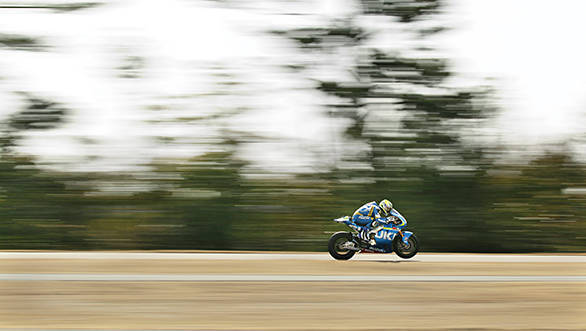 Walking away from a morning's worth of an audio-visual feast what strikes me is how simple the whole thing was. I've seen MotoGP. The pits are full and abuzz. There are girls by the score, mechanics milling about, bikes warming up, media in a frothing frenzy, fans, guests... it's a circus.

This private test is the dramatic opposite. Two bikes, two racers, five engineers. All working quietly to a plan. Making careful notes, small adjustments and making the bike ever sharper and ever more victory-ready. If it wasn't for the stature of the rider and the GSX-RR itself, it could be a small race outfit anywhere in the world preparing for the next season. No sales, no marketing, no glamour. Today is just a working day.

We sign off with some portrait photography standing next to the GSX-RR with Tsuda and Aoki. Then finally some glamour. Aoki and Tsuda sign autographs. And we're done.

As I head back to minivan 156, I hear a polite invitation to return to the pits. It seems Aoki San wants to be out on the track a little bit more and he's okay with spectators. Or we could go have lunch. Screw lunch. 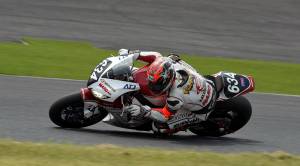