Visiting MotoGP Thailand on a budget

MotoGP! Just saying the words out loud makes me break into a grin. Watching the race, is another matter entirely. And watching a race live, getting to be there as the air reverberates with the sound of a grid full of 1,000cc motors  it always gives me goosebumps. It's the stuff that motorcycle racing fans dream of regularly, and it's the reason that I make an annual pilgrimage to the Malaysian Grand Prix. Which until now, was the most convenient MotoGP race for Indian fans to visit. European races aren't the most affordable, and they tend to be a far longer flight away from home. But when Thailand found itself on the 2018 MotoGP calendar, I decided that this year, this was going to be the one race I'd go attend. "Khop khun, Thailand!" says Halley, after getting pretty close to Valentino Rossi as he rode through the pitlane at the Chang International Circuit

The obvious benefits of getting to watch the race at the Chang International Circuit in Buriram were that it was close by, it wouldn't need me to liquidate any fixed deposits, and who doesn't want to go to a tropical paradise with fantastic food, rich culture, incredible beaches and not to forget the tourist-friendly locals? I had a terrific time! And I've come back with handy tips that you need, if you want to be at the next MotoGP race. And an album full of memories!

Timing is everything
There's no such thing as making bookings too early. Not just grandstand or circuit entry tickets, but also flight tickets and hotel rooms. Fortunately, Thailand offers Indians the option of applying for a tourist visa in advance, or potentially upon arrival. I chose to get a visa on arrival, which cost me Rs4,500, and the entire process took me less than an hour. Remember though, you need to show them your return tickets and proof of accommodation booked in advance. 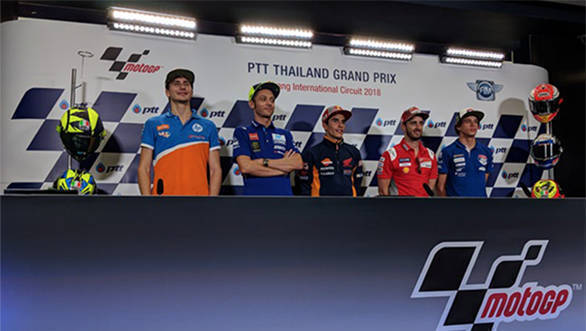 Ticket please
The tickets for the race itself are sold online, and while there are various options by way of sites selling these tickets, I recommend the official MotoGP site. The Chang International Circuit has only one permanent viewing section which is the Grandstand, but for the inaugural ThaiGP, a few more viewing stands were added. The Grandstand section offers better seating but the side stand ticket allows you to choose from four different sections spread across the track. The circuit track layout is unique and gives one a panoramic view of most of the track, especially from the Grandstand. In terms of pricing, the side stand tickets were priced at Rs 5,900 while the Grandstand ticket was a lot higher at Rs 11,500. If you happen to know someone in Thailand who can buy the tickets for you, you could potentially get the tickets cheaper (around 40 per cent less). Ticket sales in Thailand open before online sales begin in other parts of the world. 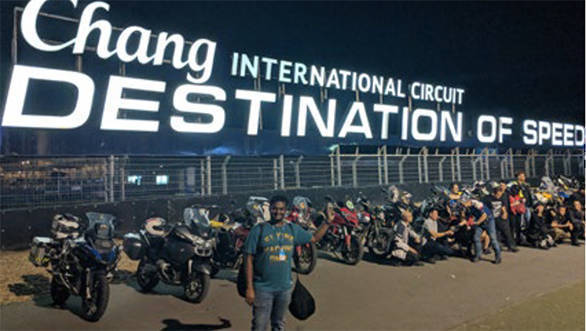 Motorcycles aplenty at the MotoGP round in Thailand. Seems appropriate!

Getting there
The ThaiGP is held in the tiny town of Buriram, situated 400km east of Bangkok. While you might get air tickets to Bangkok easily, you will also need to book air or train tickets from Bangkok to Buriram. I decided to book train tickets to Buriram and back and it was easy to do it online, however, I recommend that you do it at least two months in advance as tickets are limited and tend to get sold out quickly.

A roof over your head
But more important than that, is accommodation. Buriram and the entire province around it has approximately 8,000 rooms on offer. But the total number of spectators on race day was a 100,000! I looked for accommodation on sites such as booking.com and agoda.com two months in advance, only to find that all rooms were already sold out. There are some great places to stay in Buriram, ranging from Rs 1,100 to Rs 3,500 (for three-star and five-star properties respectively) so make your hotel bookings as soon as Grand Prix dates are announced. I met a lot of travellers who couldn't get any accommodation and ended up staying in towns one or two hours away. Since I was late to book, I managed to find a camp right next to the racetrack. The tents had air mattresses and sleeping bags, which means accommodation was pretty basic, but I didn't need to worry about getting to the circuit! I was already there!

Song and dance
I realised that the ThaiGP weekend was not just about watching the race - there were a lot of events that took place around the same time. The Chang Arena played host to some incredible Muay Thai/Thai boxing battles and anybody with a race ticket could gain entry for free. Then, there's the entertainment zone around the Chang International Circuit. There were close to 40 stands that included gaming zones, official MotoGP merchandise shops, motorcycle accessories and a wide selection of motorcycle helmets were on sale too. Legendary MotoGP race bikes were also on display and there were plenty of contests that one could take part in, winning an assortment of merchandise. Now, the reason this makes sense, is for when you're not watching racing action. Given that I had no commuting time at all, living right next door, I was able to wander around, and enjoy the sights and sounds of the buzzing entertainment zone, in addition to being in the paddock or at the stands in time for the qualifying sessions and races. There was a concert area too and it played host to top musicians and DJs from Thailand and around the world. A wide selection of yummy Thai food was on offer too.

The highlight
The highlight, however, was the chance to meet almost all the MotoGP riders at the various manufacturer stands. It allows fans to get up close to their favourite riders. You wouldn't believe the number of selfies that I saw being taken, and the odd autograph, which has plummeted in popularity. I had my fair share of fanboy moments, and I particularly enjoyed the chance to get an insight into what sort of people the riders were. How they treat the fans can tell you an awful lot about them. There was Andrea Dovizioso, who was so calm and composed and spoke to me about how he believed that the fans in Thailand were a lot more respectful of each other, compared to European fans. And that the stands weren't divided only into orange and yellow sections  Camp Marquez and Camp Rossi. Maverick Vinales and Johann Zarco were clearly feeling the effects of the heat and asked me if India was as hot as Thailand. Jack Miller was getting mobbed by Australian fans, but still took a moment out to answer a couple of my questions. 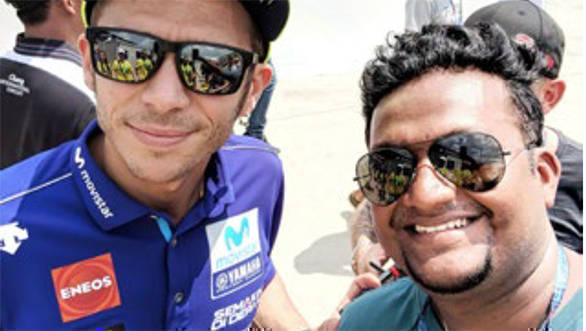 Christmas came early for Halley, what with him getting to meet and speak to Valentino Rossi

And then there was Rossi. I'm unabashedly a Rossi fanboy. I had a helmet with me that I wanted autographed, except that when I first asked him for one, he was in a hurry and had to head to his garage for a meeting. But the next time around, despite the fact that fans were climbing over each other to get Rossi's attention, he seemed to remember our earlier encounter, and he motored over to where I was standing, autographed my helmet, and then went on his way. If that doesn't put a smile on your face, I don't know what will! 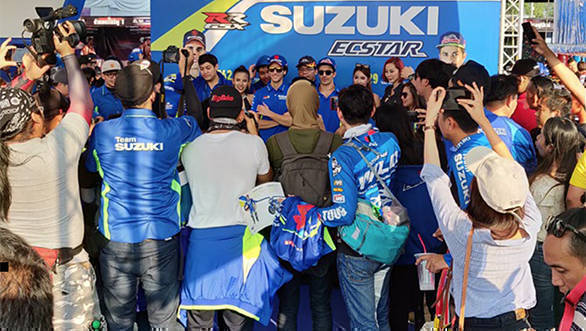 Fans gathered around the riders at the Suzuki pavilion

The Race
There's no better way for a circuit to make its debut than for it to host an absolute thriller of a race. And by this measure, the Thai GP at Buriram more than delivered! The last lap battles between Andrea Dovizioso and Marc Marquez are the stuff great races are made of, with terri?c riders, and respectful, but close ?ghting. Poleman Marquez on the Honda, shot off into the lead during the early stages of the race. 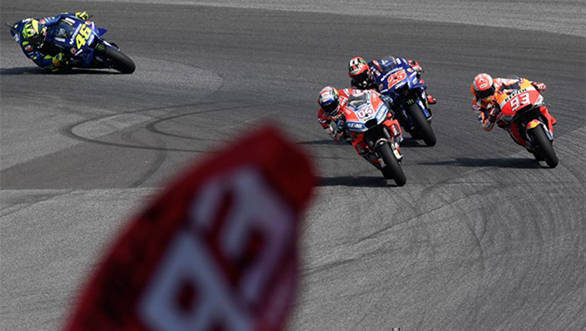 Close racing makes for a terrific GP - and the inaugural ThaiGP certainly delivered!

While he managed to hold onto the lead during the ?rst ?ve laps, he was overhauled by Rossi after that. Dovizioso got past Marquez too, taking second. Things changed on the eleventh lap though, with Dovi and Marquez both moving past Rossi. While Dovi led till the 17th lap of the race, he began trading places with Marquez after that. The nail-biting last lap was where it all happened, though. Marquez managed to get ahead, only for Dovi to manage to take the lead back under braking. Unfortunately for Dovi, though, he wasn't able to hold his line, allowing the Honda rider back into the lead. It allowed Marquez to take a historic ?rst win at the Thai GP, his second win in a row since he won the previous round at Aragon. Second place went to Dovi, while Maverick Vinales ended the race in third.

About the Chang International Circuit 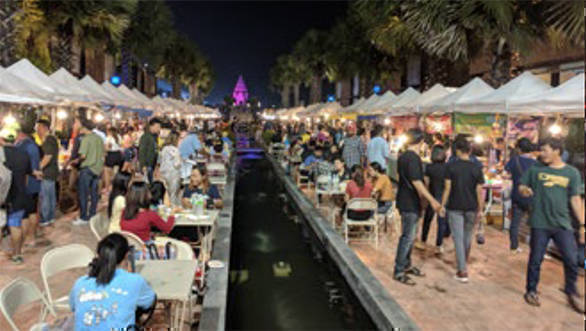 Buriram's Chang International Circuit is certified by both the FIA (Grade 1) and FIM (Grade A). The track is spread across 470 acres and can accommodate over 100,000 spectators during a race. The total lap length is 4.5km and consists of 12 turns (7 right and 5 left). One of the main highlights of the track is the 1km straight allowing MotoGP bikes to reach 330kmph. In addition to the track itself, the entertainment and nightlife (pictured above) make it worth the visit. 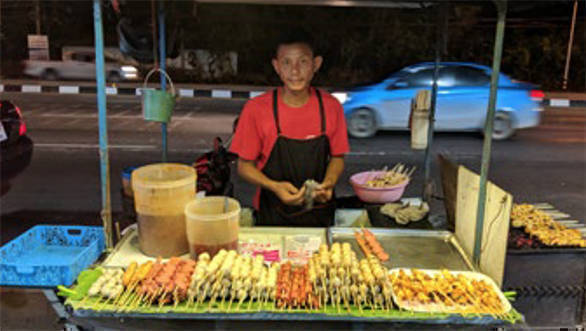 Once you get to Buriram, head out and start exploring the region and restaurants or experience nightlife at Sro Ground (Walking Street), closed off to vehicles in the evening. If you have the opportunity to venture further, there is Prasat Phanom Rung, 40km to the south of Buriram  a temple situated on top of an inactive volcano. The site is home to an extensive collection of sculptures, glorifying the Hindu god Shiva and three rare Naga bridges, the only examples of their kind in Thailand. 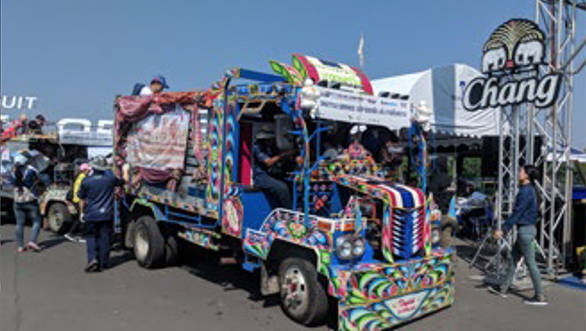 As soon as you arrive in Buriram, make sure to use the free shuttles provided to drop you around Buriram city or at the racetrack. There are very few cabs and ?nding one isn't easy. There is no Uber either. Renting a scooter is a good idea but make sure you do it in advance, there are quite a few rental options available online and on Facebook. I rented a scooter and it cost me only Rs 800 a day. An Indian driving licence can be used by tourists in Thailand.