Video worth watching: on-board with Andrea Iannone at the Red Bull Ring

This year marks the first time that MotoGP will be held at Austria since 1997. Its also the first time that the premier class of racing will be held at the Red Bull Ring circuit in Spielberg. The riders had their first taste of the 4.3km track last week in a two day private test. MotoGp is currently on a one month mid season break, but the racing will resume at the Red Bull Ring in two week's time.

Spielberg is a high speed/high power track, two of the strongest points of the current Ducati racebikes. It's no wonder that the Italian factory grabbed eight spots of the top ten, with factory test rider Casey Stoner going third fastest. That's massively impressive considering that he isn't riding these bikes every second weekend like the rest.

However, the fastest time of the test was set by Andrea Iannone on the factory bike. This on-board video from Iannone's Desmosedici GP captures the incredible speed these machines are capable off. You simply can't watch the video just once and each replay highlights something different. After the shocking speed, what immediately stands out is the incredible noise. On-board, the V4 engined Desmosedici sounds like an old F1 car and the instantaneous shifts from the seamless gearbox boggle the mind. Even more impressive than the upshifts are how rapidly Iannone is able to shed three, even four gears on heavy braking. The seamless gearbox sounds faster than some of the best supercar dual clutch gearboxes we've experienced! 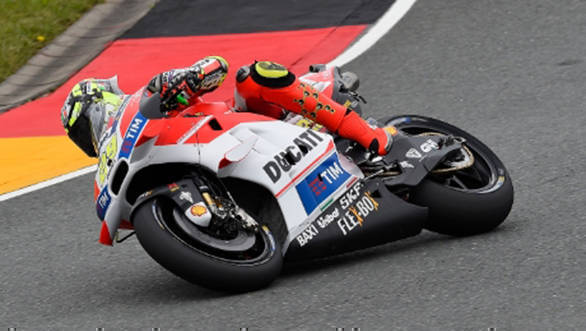 Finally, the video shows just how far ahead a top racer's skill is compared with us mere mortals. There's almost no point where Iannone is not on either the brakes or the throttle. If you watch carefully, you'll see him brake right upto the apex, while the motorcycle weaves and squirms underneath as he slows it to controllable speeds. The transition from brake to gas is nearly instantaneous and before you know it, the Desmosedici monsters down towards the next corner. Fantastic!