There was a time when motorcycle manufacturers weren't the only people who battled it out on the track. When it wasn't just about who had the fastest motorcycle or who had the most skill at the 'bars. The winner on Sunday of a grand prix motor racing weekend also depended on the kind of tyres each competitor was running. Over the years, the rules in MotoGP have seen a lot of changes. From multiple tyre manufacturers offering several different types of tyres a few years ago, MotoGP now uses a limited number of tyres that are all made by one manufacturer. Let's take a look back at this journey of the MotoGP tyre.

For the longest time in MotoGP Bridgestone, Michelin and Dunlop were the suppliers who were competing with each other. In reality though, the real battle was always between Michelin and Bridgestone, who were always at the very edge of competition. Dunlop was rarely used by more than two teams and most seasons, just one. Between the three manufacturers, you could use as many tyres as you wanted. This even included a special 'Q' tyre that was an extremely soft compound tyre that would barely last a few laps, but would guarantee record breaking qualifying laps.

All this changed in 2007. The first restrictions on the type and number of tyres came into effect during the 2007 season. The rules were amended to allow only 31 tyres per weekend to each team, provided they were using tyres made by a manufacturer that had at least two MotoGP wins. This meant they could still choose their tyre manufacturer (there were six teams running Michelin, five running Bridgestone and one team running Dunlop), but if they chose Bridgestone or Michelin, the number was limited to 31  14 fronts and 17 rears. The fact of the matter now was that tyres started playing a very big role in deciding the winner of each grand prix weekend, something that the riders weren't very pleased about.

For 2008 Dorna started to think about choosing a single manufacturer to supply tyres to all teams. But this was soon scrapped. They instead increased the number of available tyres per weekend to 40 (18 front and 22 rear). They also allowed for more testing time for the manufacturers. The tyre manufacturers could now test the tyres for a maximum of four days at any circuit after the race weekend was done there. And if there was a new circuit added to the season, they would get to do two days of testing four weeks prior to the race. During the season Valentino Rossi and Dani Pedrosa, who were running Michelins in 2007, also switched to Bridgestone. Tech 3 Yamaha, who were the only team using the Dunlops, moved to Michelin, which saw the end of Dunlop in the premier class.

2009 saw the biggest change in regulations since the tyre limit was introduced. After toying with the idea the previous year, Dorna finally decided to appoint Bridgestone as the 'spec' tyre supplier for the season. Michelin and Dunlop had been dropped from MotoGP. A lot of this decision had to do with the fact that tyres were now playing a larger role than rider or motorcycle capabilities. After all, apart from protests from the riders, Dorna also noticed a widespread fall in spectatorship. So it was decided that a single tyre manufacturer was the way to go.

For the entire season Bridgestone provided four different types of front tyre and six different types of rear tyre and one set of wet tyres. Depending on the circuit and temperature conditions, the teams were provided a choice between two of these specifications for both front and rear tyres every weekend. To ensure impartial tyre selection they were assigned to each team randomly by the FIM. Further, each tyre being marked with a unique serial number, they would be easy to trace.

While in theory, the change to single make tyres was supposed to level the playing field, they had the opposite effect. With the handicap that the Michelin riders faced taken away, the gap between the really good riders and the good riders became more noticeable. This meant that the championship contenders like Rossi and Stoner were leading the others with an even bigger margin. 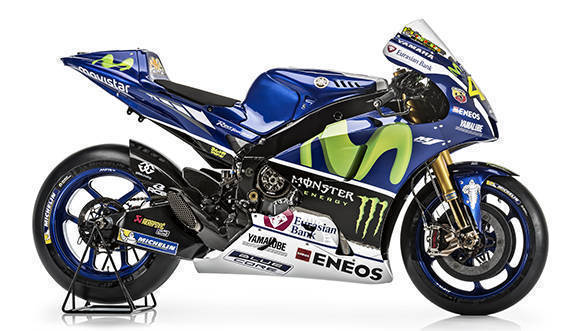 The same tyre rules and tyres continued up till 2012, where the specification of the MotoGP bikes were changed to use 1000cc engines. So, for 2012, Bridgestone introduced new tyres which had been redesigned with better construction and newer, more advanced rubber compounds. The riders now had the option to choose nine front slick tyres for the weekend. Further, those tyres were to be allocated from four compounds (soft, medium, hard and extra-hard) out of which the team had to pre-select three that they would have access to over the weekend. But, they could only select the same spec for five races. Similarly, they would have access to 10 rear slick tyres from among four compounds (extra soft, soft, medium and hard) of which two would have to be pre-selected for the race weekend. These two were limited to six soft compound rear tyres for the entire season. The teams could also choose from four sets of wet tyres in soft or hard compounds.

The next year, regulations changed slightly. For 2013, teams were allowed to use 10 front slicks from four compound specifications (extra soft, soft, medium and hard) of which they had to pre-select two specifications per weekend. Likewise they got to use 11 rear tyres from the four compound specifications, of which two had to be pre-selected before the race. The teams could use the same specification front tyres only six times in the season and they were also allowed to use the soft rear tyre for only seven races. As for wet tyres, there were now three compounds available  soft, medium and hard. Of these, they had to preselect the two they wanted to use for the five tyres allotted to each rider.

The biggest change in 2013, though, was the different tyres that were given to the CRT riders. The non-factory bikes were allowed to use tyres that were one grade softer than the others. The idea was that the softer compounds allowed to the satellite teams would give them a small advantage that could help with their smaller budgets.

In 2014, Bridgestone initiated a tyre marking system to allow spectators to identify what tyre each rider was running. The extra soft compound had green marking on the sidewall, the soft had white marking, medium was all-black and the hard compound was marked in red. They also changed the front tyre allocation for the season. They could now choose ten front slicks for the weekend. From the four compounds, riders had to allocate two primary and one alternate spec. They could assign a maximum of six tyres in any of the primary specs and a maximum of three in the alternate compound. They were initially allowed to allocate six tyres, while the rest could be assigned after the second free practice. After FP2, they were allowed to allocate the remaining three slots in any specification they choose. This could be a maximum of three from the primary compounds and a maximum of two from the alternate compounds.

2015 was Bridgestone's last year as official tyre supplier. For that year, while the regulations for the front tyre remained the same, there were changes to the rear tyre rules. There was a new extra-hard rear tyre on offer for the season. There would be three tyres that Bridgestone offered at each race according to the nature of the racetrack. Teams could choose from extra hard, hard, medium, soft and extra soft tyres. There were three combinations of rear tyre available. One was extra hard, hard and medium. The second was hard medium and soft. The third was medium, soft and extra soft. The factory bikes could only choose from the latter two options while the rest of the bikes could choose any combination they liked, but all limited to 11 tyres per rider. 2015 was the final season that Bridgestone supplied tyres to MotoGP. 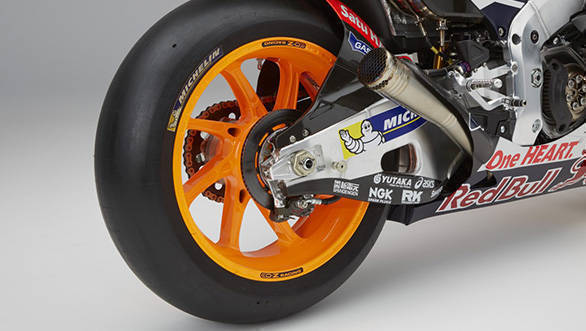 Starting 2016, Michelin took over as the official supplier. Aside from wet and dry tyres this year, there are also an option for intermediate tyres for damp conditions. Each race will have soft, medium and hard tyres. However, the compounds used in each of these may vary from circuit to circuit. Riders will get to choose 10 front tyres and 12 rear tyres for their weekend. They will get to choose two primary specifications and one alternate for their front slicks. Of this, they can choose maximum of seven tyres from either primary spec and maximum of three from the alternate. Likewise, they can allot a maximum of seven rear slicks from either primary spec and a maximum of five from the alternate. The riders will also be allowed to choose seven wet tyres for both front and rear in two specifications. There will also three front intermediate tyres and three rear intermediate tyres available.

Michelin have had some trouble getting their tyres in order for this season with a lot of tyre failures and crashes in pre-season testing. The first incident took place during testing at Sepang in Malaysia, where Loris Baz crashed at 290kmph due to a tyre failure. Baz walked away virtually unscathed, but this incident forced Michelin to retire their softest compound for the rear tyre for the rest of the test. The second incident was fairly recent, with Scott Redding's rear tyre burst taking place during free practice of the Argentinian GP. Loose tread from the burst slapped Reddington's back fairly hard, resulting in bruising. Michelin withdrew all their tyres from the GP that weekend and provided a special tyre instead, made of harder construction, which necessitated a mid-race bike swap for all riders. However, things seem to be going better for Michelin since. Race winner at the French GP Lorenzo lauded the newer rear tyre for its reduced wheel-spin and being able to push harder with them. Just goes to show you that development in MotoGP, and motorsports in general, is a never ending process.