To give you a quick recap of where we left off, my first report introducing Wall-E came from a dhaba at the Taglang La in Ladakh. It was the return journey, and as promised this report aims to fill you in on how the Tiger fared on this trip. 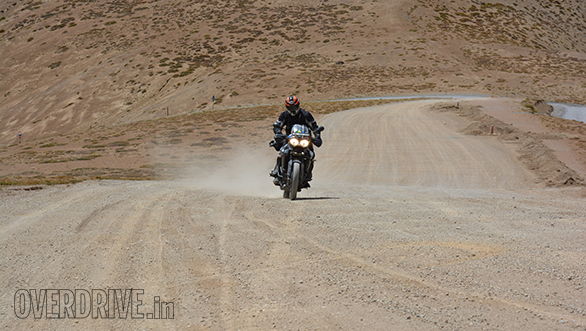 This was the first time Wall-E headed to the mountains. Its life before me was only restricted to city and breakfast runs that most 'big' bikers seem to take pleasure in. These runs had left this Tiger with unevenly worn tyres, and getting a fresh set in time for my ride wasn't feasible. Since they had some life left in them, I decided to wear them out completely on this ride and import a fresh pair. Bad idea.

The tyres held up well on the tarmac, and the XRx's overly active traction control kept things in check for most of the ride. But on rough patches, the tyres would show their age and the lack of grip. The Rohtang Pass after Manali was the first downside for the tyres, as the deep slushy patches made movement difficult with the road-biased pattern. Past this hurdle, the Tiger was in its zone again on the lovely twisties leading up to Jispa and beyond. 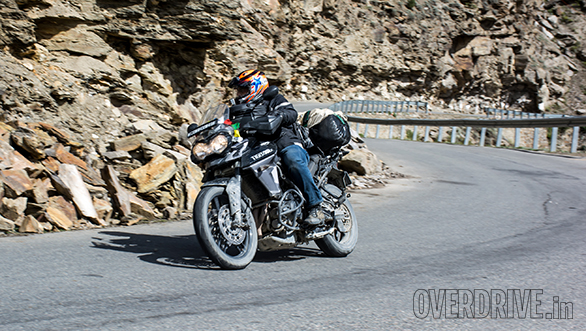 By the time we reached Gata Loops, memories of the Audi Q5 and the Isuzu D-Max came to my mind. Just days before my ride, we had made use of these two cars to exploit the little off-road trails around the Gata Loops which literally bisect the serpentine road and cut travel time. Not to mention the excitement of climbing the trails with capable off-roaders. I attempted the same with the Tiger. The smaller trails early on were no work at all. But as I hit the steeper and longer trails, the inability of the tyres to grip was highlighted yet again. At one point I was stuck on the slope with the rear wheel struggling for traction. Thankfully, it dug in deep enough through the sand to hit some rocks and pull itself out. Similar scenarios presented themselves again in soft sands of Shyok, the off-road patches of Nubra and some river crossings around the Turtuk village.

An annoying bit with the Tiger is that you cannot choose the riding modes on the fly. One needs to come to a complete halt, and to make matters worse, the mode selector is on the instrumentation and not on the handlebar! It can get tricky when you are in Road mode and you are suddenly presented with a big patch of sand or rocks. The rear will keep slipping and the traction control will keep cutting power when you least expect it.

On the return journey, I attempted a downhill trail around the Gata Loops again and by now the tyres had almost given up. The moment I started the descent, the rear lost traction. The electronics did try to catch it back, but the weight of the bike was enough to negate the effect of the traction control. I could somehow control the power and the weight and make the first curve, but then the trail switched sides and I couldn't. I managed to point the bike towards some soft sand before falling and therefore neither Wall-E nor I was hurt.

Three lessons learnt - one, the Tiger isn't an off-roader, but a tourer with off-road capabilities - understand the difference. Two, never attempt any off-road sessions alone and always have backup. Three, have the right tyres for the right environment. The latter has been addressed with a pair of Heidenau Scout K60s. More on that in the next report.

Apart from these hiccups, the rest of the ride was an absolute cracker. It was surprising how the Tiger handled the twisties with two panniers, a 10-litre fuel can and multiple bags bungeed onto the rear seat. Even with the worn-out tyres, the feedback was amazing all throughout - which is something that the Ninja 650 could never communicate. That was also my biggest apprehension against the Versys 650 when I was making my buying decision. I want my motorcycle to talk to me, and therefore I'm glad I went with Wall-E instead. 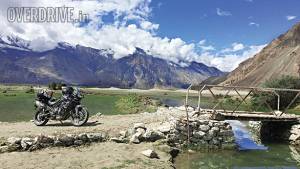 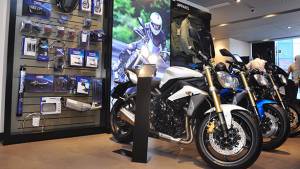 Triumph heads north with a dealership in...
Advertisement