Treading the Path of Experiences on Hyundai Tucson

Every experience you go through in life results in an opportunity to discover your true self. And for those who dare to dream and those who know their purpose, life is too short to miss out on experiences which are the just unforgettable. 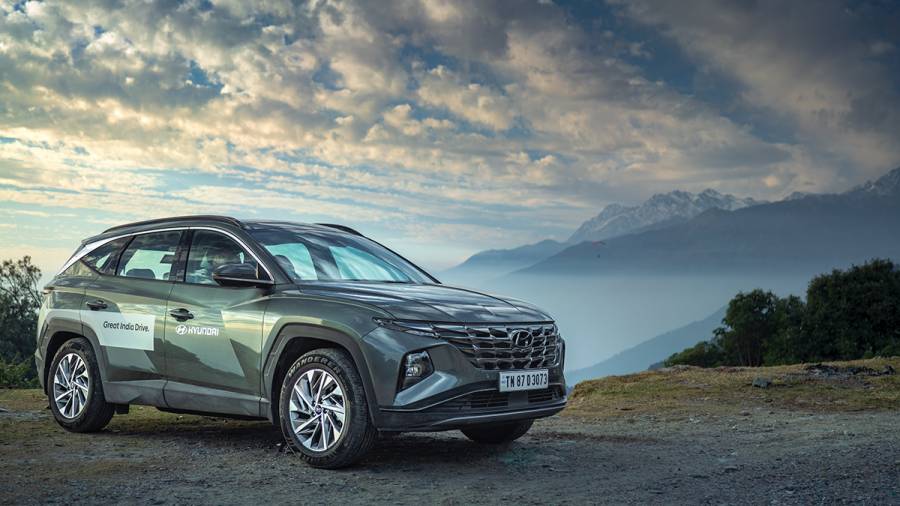 Talking about experiences, Hyundai gives us lucky few the opportunity to experience beautiful locales, exceptional views and memorable journeys all across India in a Hyundai every year. The Great India Drive is an annual excuse to go on journeys such as this one which leaves a mark on the psyche of the explorer like no other. This time we are on a journey in search of experiences which truly touch the soul and reverbs in the mind and this took us on a drive from Srinagar to Kargil and then from Jammu to Palampur. Such diversity does not come easy, you have to brave the elements, the high altitude terrain, snaking traffic and so much more. From the Himalayan mountain range to the battle scarred but gorgeous valley of Kargil to the beautiful views of the Dhauladhar mountain range with its mesmerising tea gardens, the hot cuppa on cold mornings is a bonus for me, but this is going to be an epic journey! 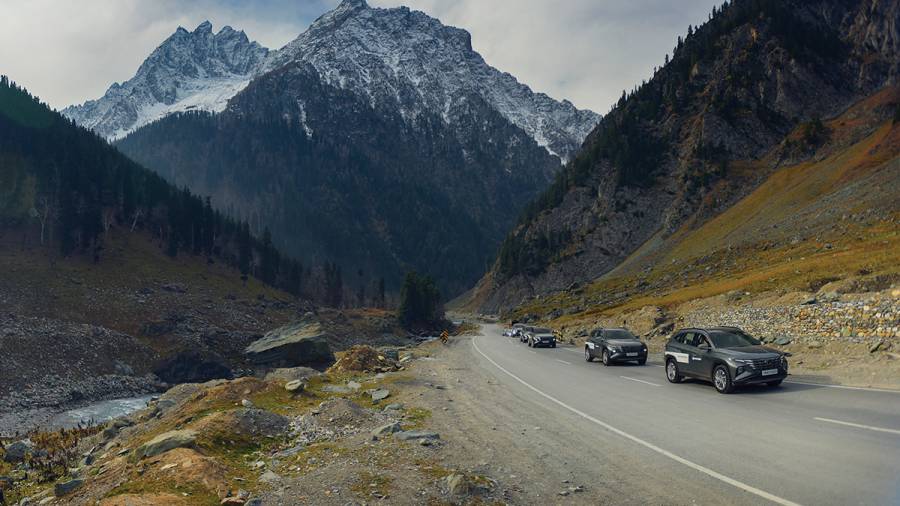 Our journey began in Srinagar, at a time when forecasts spelled snowfall in big bold alphabets and nasty sub-zero weather. A convoy of Hyundai Tucsons left Srinagar early in the morning, winding its way through a maze of streets in Srinagar and etching ever so closer to Sonamarg, our first halt for a healthy repast. We were barely out of the gates when murmurs arose over the radio of the road to Kargil being shut due to the formidable Zoji La pass being snowed out. To say a cold sweat broke over my brow would be an exaggeration in this chilly weather, but it did. Yet we soldiered on, soldiers of the unknown, not knowing what fate lay in store for us ahead. As the road meandered through the narrow lanes of Srinagar, it soon became apparent that this was a formidable convoy. The Hyundai Tucson does make an impression especially in its new garb. Nearly 18 of them one after the other,
all in gray and green, well the residents of this picturesque town must have thought another invasion was coming. 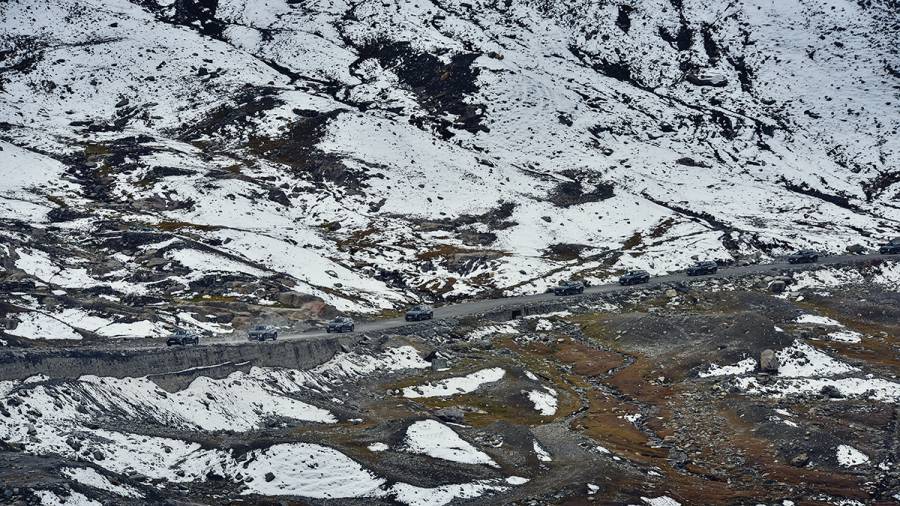 As we got closer to Sonamarg, the road widened, and soon enough we saw meadows and field covered in snow. White is mesmerising, especially when it stretches across hill and valley, when its sprinkled across chinar, deodhar and pine, when it roosts on roofs and brings its weight to settle down on the land. Its ethereal, ghostly and intensifies the landscape unlike any other season. And we were driving through it. This however also meant that fears were about to be realized. As we hit Sonamarg, and our rest stop for the day, the news that the mountain pass was closed reached our ears. All around there were dejected groans, had our journey come to an end even before it began. Apparently not!

The mad men at Hyundai were clearly hard at work, numerous calls were exchanged with the local authorities, lots of pleading, cajoling and convincing took place but at around 5pm that evening, almost 5 hours after we had stopped to break, the convoy was given a go-ahead to carry on our journey to Kargil. If we had to meet the local authorities, I'm certain lots of hugs and high-fives would have been exchanged that day! This permission was provided to us exclusively, which meant for the next 100-odd kilometres there would be no one on the road but our convoy. Talk about the icing on the cake. The only caveat would be that we would have to leave our 2WD Tucsons behind and pile up in the 10 AWD Tucsons. Hardly a challenge when the reward would be this good! And off we went. 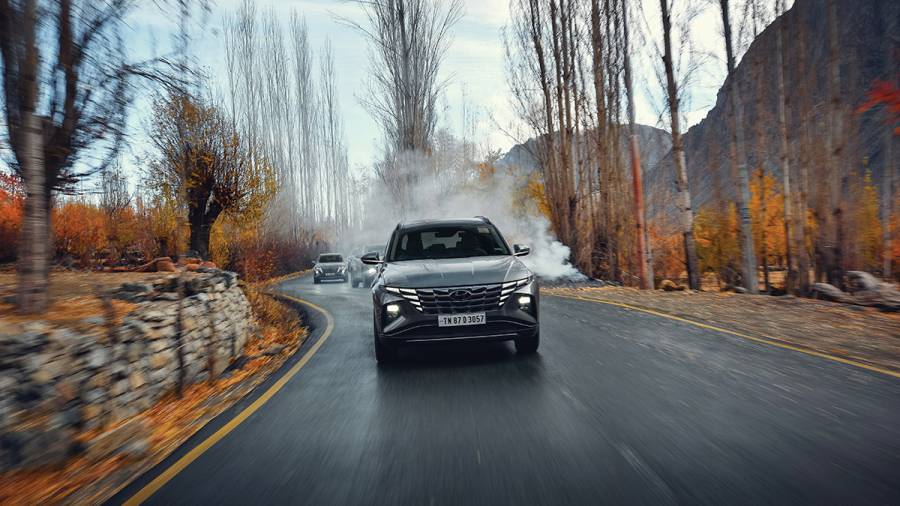 The drive over the Zoji La was surreal. Since we had left late, we were losing sunlight, and just as we hit the base of the climb up the pass, dark shadows spread across the mountains. The parametric lights came on, and in the flood of LED, the road and the mountain side took on a new meaning. Some images do exist of the convoy in this terrain, where the roads were completely frozen, and the landscape full white. But, for the larger part, all we were concerned about was not having to stop when the temperature reading on the dashboard showed a bone chilling -7 degrees C and dropping! So, off we went, as fast and as carefully as possible. Yet no one broke stride, no one dropped pace. This wasn't an adventure where anyone would goof up! Yes one or two drivers did go horribly sideways on the icy roads but nothing the Tucsons smart as Hawking electronics couldn't overcome. 2 and a half hours later, to the incredulous looks plastered across local taxi drivers faces we rolled into Drass and stopped for piping hot cups of chai, frozen cream rolls and a hot stove to gather around. Most of the local taxi operators couldn't believe their ears when we said we'd just come over the pass, as they weren't allowed. Smug faces and noses in the air, we sashayed around, not realising the effect this would have on the locals. We would only realise our folly the next morning when we started our drive back to Srinagar from Kargil, when to our shock we discovered a snaking queue of traffic almost 7-8 kilometres long, all having a go at crossing the treacherously icy slopes of Zoji La. Our journey back, wasn't as joyful as the one we had just done the previous day. Lots of waiting, snacking, and squeezing a way through insanely long lines of truckers is how we spent nearly 14 hours that day on a journey that usually take around 5 from point to point. Why could we not have silently disappeared into the night, poured a dram in our rooms and snugly sank into our warm beds at the resort in Kargil. 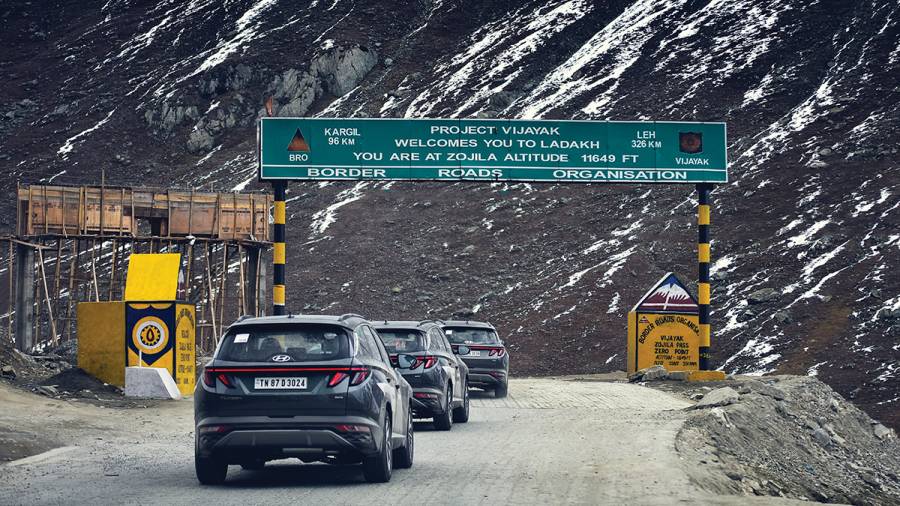 We finally made it to our hotel and the following day; I handed over the Tucson to Anirjit in Jammu. Here is how that story went.

We start off our Journey from Jammu after a hefty breakfast and the drive down to the lower Himachal at Palampur remained picturesque. During this time of the year the mountains wear a different shade of colour than the summers and this transition of the background unfolded to form picturesque locales for our machine on this trip. The Hyundai Tucson, which is the latest one in the line of facelifts from Hyundai and falls under the compact crossover SUV segment where it has caused a lot of hype due to its slick and sharp looks and advanced features. The Tucson brand name has always identified to a great blend of edgy and classy. And the interiors on this are proof of that. The comfy and spacious cabin of the Tucson kept us in lounge mode all along the trip with the dual zone climate control AC taking care of the varied weather fluctuations. The exteriors are sharp with the crease line ending at the connected LED tail lamps which seem to be the craze right now and honestly, I don't mind this one. 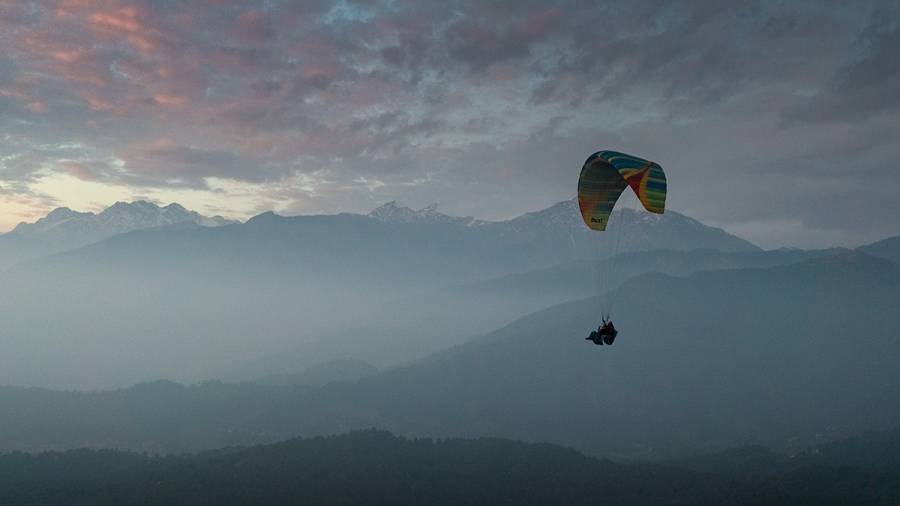 Our journey took its first stop at Bir Billing, an hour's distance from Palampur, which is famous for its adventure treks and of course paragliding. A debut experience for me, paragliding was a revelation into sights, breaths and winds which possibly only birds are savvy with. This one of a kind experience reveals how insignificant we are in front of the vast expanse of nature and its powers. As we were talking about experiences this one will definitely come in the top 10 for me. Palampur is a bustling tourist destination, famous for its tea gardens, pine forests and the beautiful snow-capped Dhauladhar range. It produces the internationally famous Kangra tea from gardens which were first introduced to the state by the British way back in 1849. No wonder it is called the Tea capital of North western India, and myself being a Darjeeling Tea snob am putting up this one on my list of favourite teas for sure. 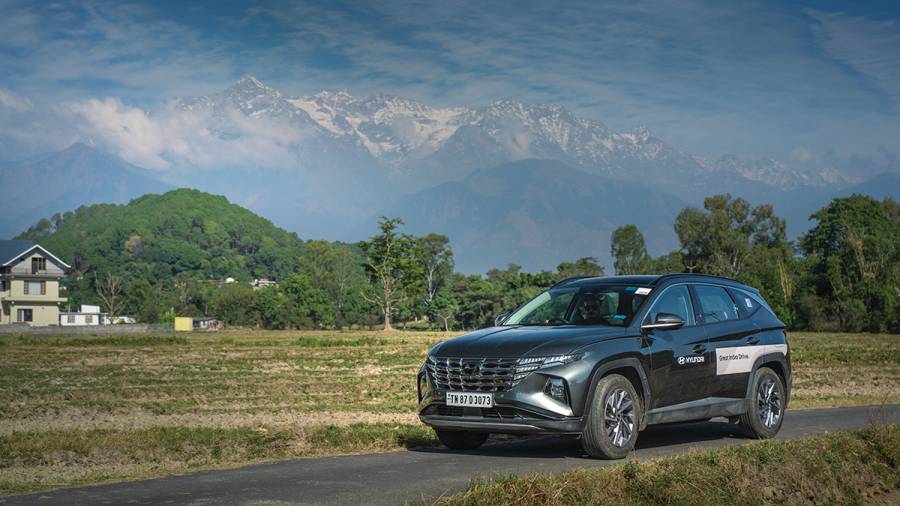 The Hyundai Tucson is made to make a statement and that too the one that leaves a mark. The latest facelift sees the sharpest ever Tucson design with a sporty silhouette. The front facia is everything with the dark chrome DRLs integrated to the front grille, making it look fierce yet stealthy. No doubt this is by far the best looking luxury SUV in the market. The 2 litre petrol engine mated to the 6 speed gearbox produces ample power and torque to work these roads with ease. The Tucson makes my job driving down the difficult mountains much easy with advanced features and active safety systems. The interiors are cosy and luxe giving me this "Business Class" traveller vibe and I loved it, it was also spacious enough with a massive boot to hold all the luggage for two people topped with equipment and essentials. 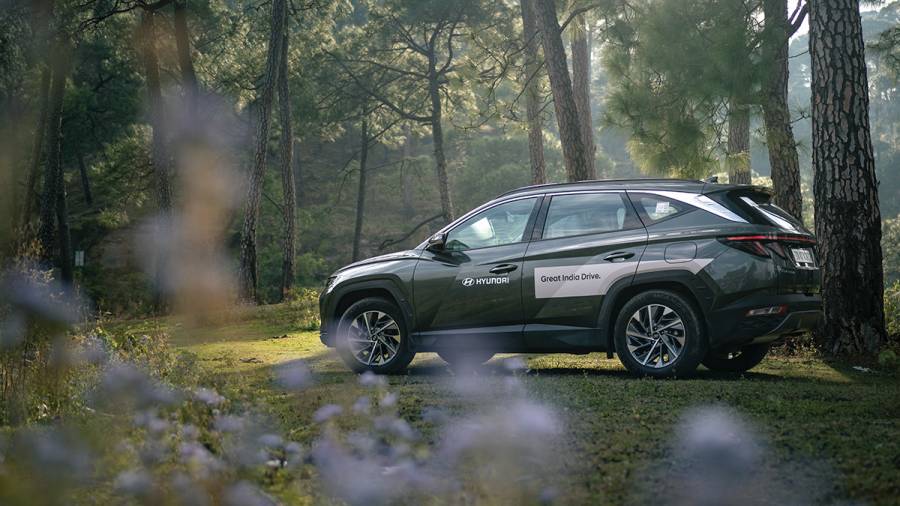 Palampur was a beautiful refuge, but what we were essentially seeking was artistic quality and this time we got just that at Andretta. Just a twenty minute drive from Palampur, Andretta is a distinct change in aesthetic. Andretta is an Artisan's colony which dates back to 1920 when an Irish theatre practitioner Norah Richards shifted here from Lahore. With such a picturesque backdrop no wonder this is a melting pot of art which has attracted many noted artists, theatre practitioners and painters from across the country and the world. Recently the quaint haven to artisans has seen a boom of potters who are honing their craft and creating marvels every day.

At Andretta we met with Shubham Sankhyan who runs the oldest pottery studio in India called Andretta Pottery and we got an insight into the world of pottery through his lens. We learned how pottery being a raw art form gives the maker absolute independence of creativity and hence proves to be therapeutic and creatively liberating. This pulls many people from the corners of the world to take up courses with them and learn the art which not only is an art form but a lifestyle choice. The quaint pottery studio looks over the Dhauladhar range and is placed amidst greenery making it a perfect place to culture an art form in such a tranquil locale. Talking about art, the Tucson is a business class luxury SUV and it performs as it promises, and all thanks to the Tucson's superb ride quality and driving pleasure we could witness so much through such a long and beautiful drive. 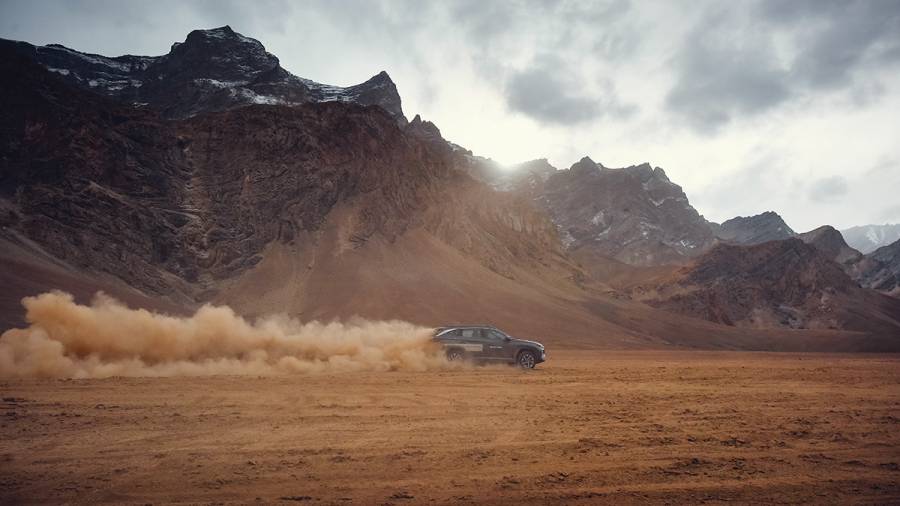 We appreciate Hyundai's untiring efforts towards a sustainable future with their cutting edge tech and constant innovation towards a lower carbon footprint. This is important to conserve and sustain places such as this which truly are pieces of art. The Tucson proved to be a great companion for the Great India Drive travelling through Jammu to Palampur, and faced the rather difficult terrain with ease. The numerous driving modes on and off road makes sure of driveability and utmost comfort. The advance safety systems topped with the second gen ADAS and following an array of safety measures makes this a statement from Hyundai about their constant efforts in enhancing safety in mobility. 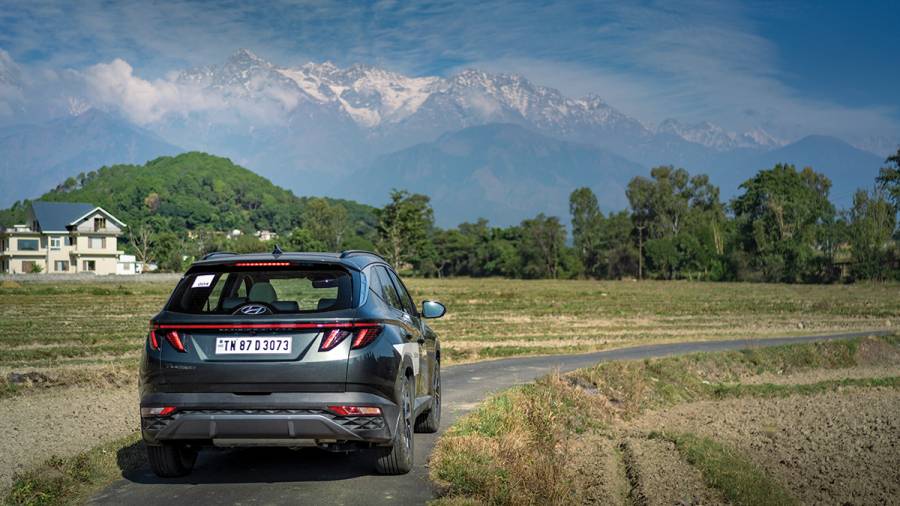 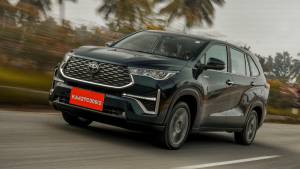