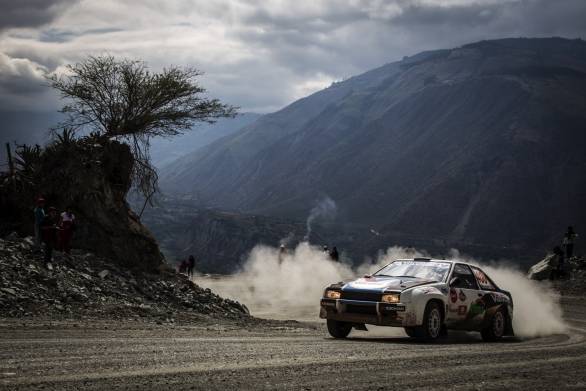 A unique rally winding its way through Southern Peru, more than eight days of chasing rally cars piloted by a bunch of hard as nails Peruvian drivers, photographing each car as it makes its way around corners, over dunes and through harsh terrain. Chasing the cars through difficult tracks, getting up to altitudes so high that your head feels like it's going to explode. That was the task at hand and it seemed like an interesting challenge. One that I simply cannot turn down. And so I sign up at once.

Two months ago, from the September 7-15, the Rally Caminos del Inca (RCI) was held in Peru. Two months later, I still cannot shake the feeling of my bones being rattled as I traversed those treacherous paths, all in a bid to cover one of the world's highest rallies.

The Rally Caminos del Inca (RCI) was first organised in 1966 and until today, it is the oldest rally in the world maintaining its format: racing from city to city. Back in the day the rally had been cancelled a couple of times due to fuel shortages in the 1970s and terrorist activity in the 1980s. The RCI has been held every year since 1985, though, celebrating its 42nd edition in 2013, with a record number of 98 inscriptions. Starting in the Peruvian capital of Lima it takes the many competing teams five whole days of rallying to cover a distance of 2800 kilometres, passing through historical cities such as Arequipa, Cuzco, Ayacucho and Huancayo, before returning back to Lima. 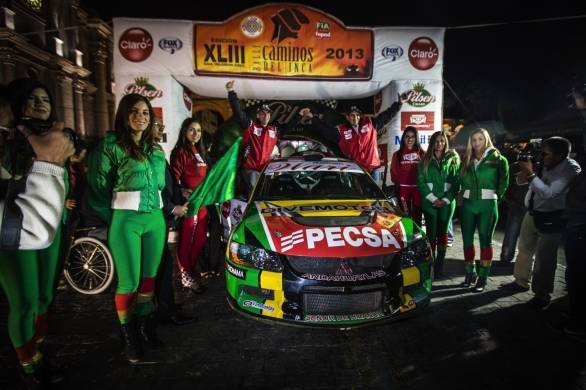 The ceremonial start of the Rally Caminos del Inca

I had been through Peru several times before and covered the last two editions of the famous Dakar Rally, which in 2012 ended in Lima. In January this year, the Dakar started in the Peruvian capital, before heading south towards Chile and Argentina. And it was during the Dakar Rally that I fell in love with the incredible sand dunes in southern Peru. I was disappointed to find that the Caminos del Inca didn't follow the same route or those challenging landscapes. Driving through the route of the Rally Camino del Inca, though, and experiencing and documenting the rally itself, I changed my mind. The warmth and enthusiasm of the people along the road and the different towns we passed through, combined with amazing landscapes and ancient cities, proved to be an incredible setting for a rally. To this, add almost a hundred vehicles in eight different categories, each of them trying to make their way along coastal roads, through the mountains and endless curves and you have the perfect ingredients for a real adventure.

On Saturday, after the ceremonial start and introduction of the different teams on the main square in Lima, la Plaza de Armas, the participants took off to the racetracks of La Chutana, just outside of Lima. Here the teams participated in the special Prime that would define the order in which the pilots would start the first day of the rally. Meanwhile for us, the people chasing the rally, eager to capture and document each second of it, it was an early start. We set off as dawn broke over the next morning, traveling some distance, and then setting up camp along the coastal highway, waiting for competitors to pass by. Of course, before the roads could be converted into the high speed rally stages that they will transform into, they needed to be cleared of traffic. So we followed one of the official organizer's cars around sunrise, driving down tracks that hours later would have rally cars barreling down them, kicking up dust trails in their wake. 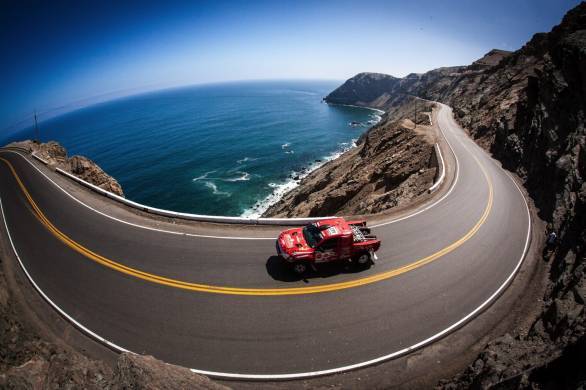 The first real day of rallying would take the pilots from Lima to Arequipa, a city famous for its white volcanic rock buildings. The long day would also be the hardest stage of the rally, covering 988 km towards the south of Peru. There were several dropouts along the way, including one of the contenders for the title: Raul Orlandini. Over 50 rally teams managed to qualify in the three sections of the stage, led by Rommel Palomino in the N4 category. Dakar pilot Diego Weber leads the truck category as expected.

After a couple of hours, as the last cars passed by, we quickly took off in our car, ready to hit the road before it was opened to all traffic again, driving on to Arequipa. By nightfall, after an exhausting day, the pilots that managed to reach Arequipa are welcomed by the large number of motorsport fans that have gathered at the main square of Arequipa to cheer for the teams, which include some local drivers. The next day will be the resting day and in the evening there is a symbolic start, leaving the Plaza de Armas in Arequipa. A huge crowd attends the event, and entire families have gathered to see the cars downtown during the ceremony. Compared to the Dakar Rally, photographing the rally Caminos del Inca is a different story. While during the Dakar, we spend the night in tents on the track, edit our material while driving from one place to the other and upload our pictures in gas stations along the road, the fact that the RCI consists of one racing day and one resting day, it all becomes a little bit more relaxed. After working the entire day, we head for our next destination. No tents but hotels where we spend the night. No quick lunch boxes taken from the bivak's catering but decent food in restaurants. It is an entirely different story. Make no mistake though, when the rally is on the road, it's not for the faint of heart.

The next day, the competition continues to rise to greater heights. And I mean that literally - the rally route passes as high as 3,399 metres, travelling through towns such as Chivay, Callali, Tintaya Espinar, Yanaoca, Acopía, Sangarara, Acomayo, Rondocan, Paruro to finally get to St. Jerome. After that, it is only a small distance towards the old Inca capital Cusco. A total of 605km is traversed in that one day, combining different surfaces such as asphalt and gravel. 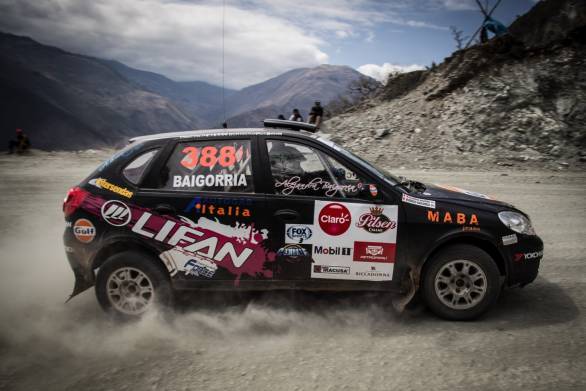 That's an, ahem, Lifan 520 being rallied with moderate success at that!

And while the rally cars are busy navigating their way through the treacherous stages, us bleary-eyed photographers set off bright and early. We leave at 2:30am, in order to ensure that we are far ahead of the competing cars and have found a good spot to work during the day. After racing over cold and freezing plains for hours, we finally reach our destination, a little dusty road between the mountains where school kids and local farmers have come together to watch the race.

It isn't long after we arrived that we can see the first cars appearing in the distance. Dozens of people have gathered there and start cheering enthusiastically as the first competitors race by, leaving dust and throttling engine sounds as they pass. After a couple of hours, as the last cars have gone past, we also continue the last couple of hours towards Cusco, the old Inca capital. 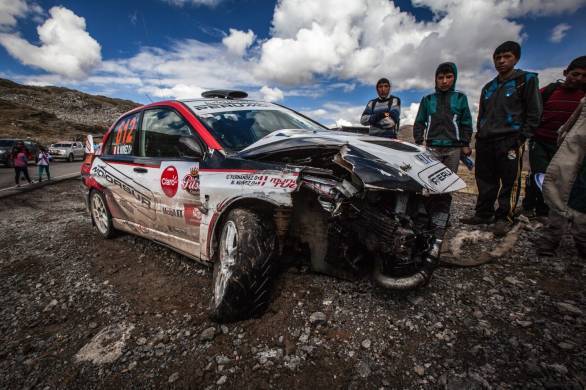 The following day, the main square of ancient Cusco guarantees a splendid view of racing cars and hundreds of people, ready to cheer for their favourite participants, as the local mayor is presenting them on a special stage. A day of physical rest for the teams, but not mentally, as they know that the toughest part of the rally is still to come

On Thursday morning, sixty crews present themselves for another racing day, ready to meet with one of the most difficult stages of the competition. In a stretch of 656 km without a break, the cars have to pass constant curves and challenging rocks all the way to Ayacucho. And the fact that from now on, the rally only goes up, not passing lower than 3,300 metres, represents another challenge for the already exhausted drivers. 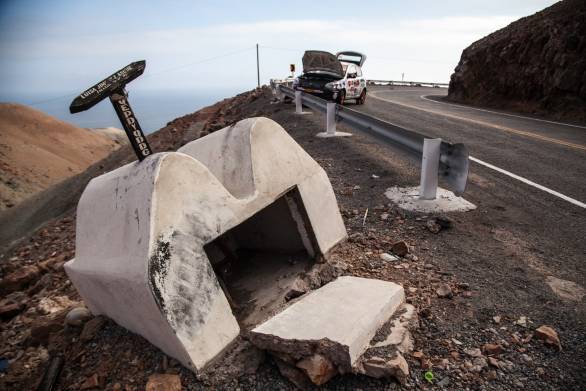 Once again it is an early start for us - we take off around 2am, with hundreds of kilometres of curving roads ahead of us. And traversing those roads in complete darkness is no easy task. After five hours of driving we get to our spot, high up in the mountains, with a splendid view. Less than a kilometre away from where the day's special starts. Thankfully there's time to take a quick nap, grab a sandwich for breakfast and wait for the race to start. 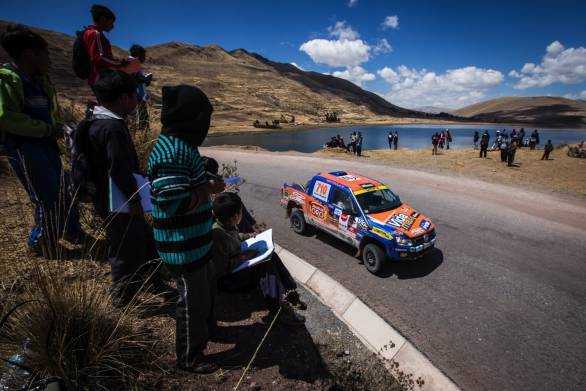 Crowds gathered along the rally route to cheer participants on

On Saturday, the stage continues into the mountains and the pilots cross the highest point during the fourth and penultimate stage, a mountain pass of 4,812 meters. In total, the distance between Ayacucho and Huancayo is not that long, only 298 km, though the high altitudes are not to be forgotten. And then there is only one last day left to race go. 249 kilometers downhill, back to sea level again and to the warm welcome of the fans that are awaiting the pilots at the finish line in the town of Chosca, 30 kilometers away from Lima.

The crowds cheer as soon as the first car appears in the distance. Accompanied by a warm applause from dozens of people, the first pilots that arrive receive flowers and acknowledgments from Eduardo Dibos, president of the Peruvian Automobile Club and responsible for organizing the rally. 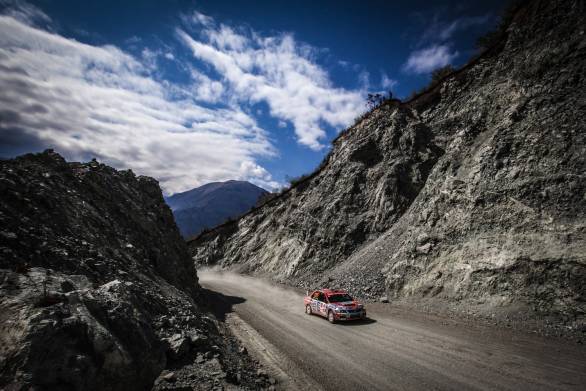 The Evo IX - popular at rally stages across the world

After the ceremonial finish in Chosca, the drivers continue on to Lima, where even more people await them. This is where the teams meet up with their mechanics and see friends and family again. And for us, it's a time once again to edit our work, upload photos and finally catch up with some much needed rest. 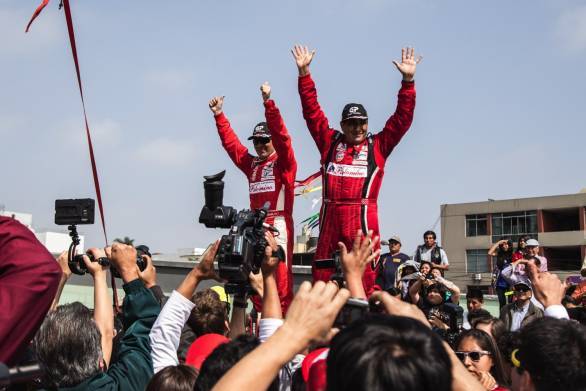 Richard Palomino and J Rodriguez - winners of the grueling rally

But what of the rally itself? Well, merely a couple of days into the rally itself it became clear that the brothers Palomino have the best cards to play the game. The brothers are the overall winners of the rally, completing the 2,800 kilometers of racing track within less than 21 hours. Richard Palomino is the quickest of the two, completing the rally with an exact time of 20:44:54.8 hs. His brother Ronmel comes in second, with a slight difference of one minute and seven seconds, making their victory absolute. It's been terrific!