The road ahead has narrowed down, its now just around 10 feet wide. As I slow down, I notice that it's a deadly cocktail of potholes, slush and deep ruts. There is an army truck ahead of me and barely sufficient room for both to pass each other without exchanging paint and fenders. In the quest for a bit more space, my eyes instinctively glance over to the left shoulder of the road. The view isn't confidence inspiring as nature has generously garnished it with broken rocks, sharp stones which can easily shred tyres and boulders the size of compact SUV's.

Seated behind the steering wheel of the new-generation Toyota Innova Crysta 2.8 AT, I begin to sweat. The right shoulder marks the start of a 400 foot drop. To add to the drama, the army truck wants me to pass it on the right. As you would have sensed by now, I am on a treacherous mountain road. That too on the mighty Khardung La which takes one up to 18, 314 feet above sea level.  Unfazed by the majestic views, clear blue skies and a bunch of clouds which appear to be hanging an arm's length away, I ask my co-passengers to act as spotters. With centimetres to spare, I manage to manoeuvre the Innova across. Sigh, relief, no scratches just yet, only 1200kms more of this to go! 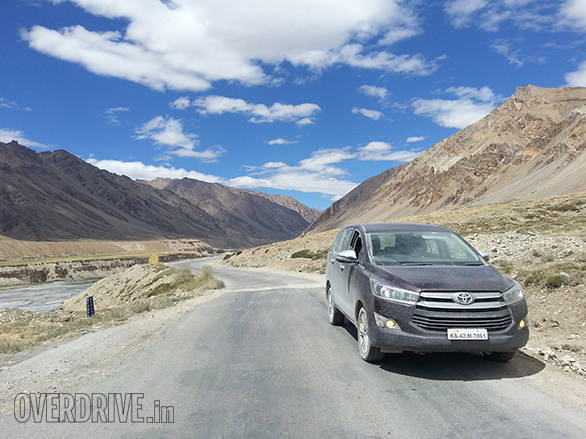 On Day two of the drive from Chandigarh to Leh, the Innova Crysta had for the umpteenth time come out unscathed. By now, you must be wondering why we choose to venture out in such terrain in an MPV. The first generation Toyota Innova is a true legend that has etched its name in history books. And not just because of the fact that since its launch in 2005 it has dominated the MPV segment in India. Across the different states of India, families and fleet owners drive the first-generation Innova for myriad uses, in myriad conditions.

We have come cross many of the earlier models which have clocked over 3 lakh kilometres and are still running almost as good as the day they left the factory! Even in the harsh and unpredictable climate of Ladakh, the Innova has built a formidable reputation and continues to stand head ans shoulders above all other vehicles that pass though here. Everyday, hundred of Innova's make the trip to Ladkah, over high passes, across bad roads, and they pound those roads, day after day after day. The only problems we have heard drivers complain about, punctures! Well Toyota does not make tyres, so we will leave it at that! 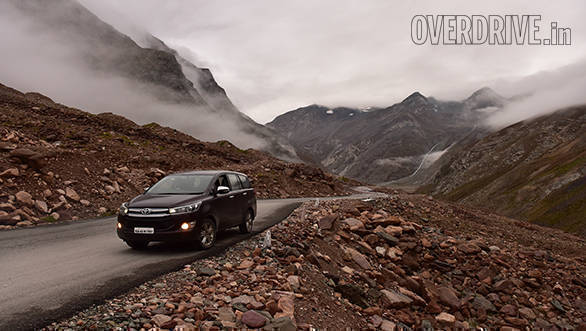 Now we have driven the new Innova Crysta extensively in urban conditions and highways and it impressed us. But can it match up to the legacy of the previous model? Is it also as much the 'will go anywhere' MPV as its predecessor? Will it falter at a higher altitude or punch above its weight? And just how much better would it be if it did make it to lofty heights? From Chandigarh to Ladakh, this is the ultimate test for anybody, how will India's newest people mover fare?

Owing to the unrest in Srinagar, we decided to take the Manali route which is the more daunting option. On day one, it took us around six hours to cover the 300 odd kilometres from Chandigarh to Manali via NH205 and NH3. The two-lane highway was mostly well-paved and for the intital part of the route, it was an uneventful drive. However, the Apillars on the Innova Crysta are really thick and while driving around bends, they block your view of the road ahead. In fact, it's big enough to hide small cars, sometimes even buses and this required me to be extra cautious. 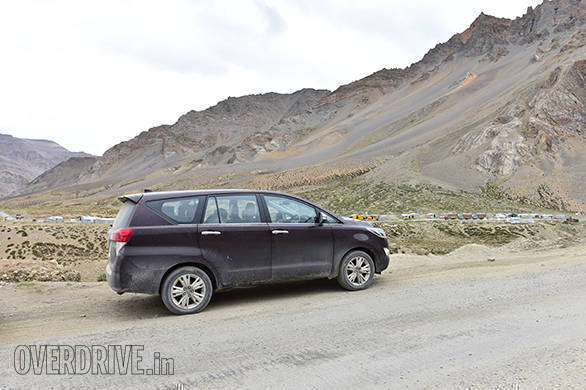 As you drive past Mandi and get closer to Manali, the road gets twistier making it tough to understand whats coming around the bends. And then the A-pillar further reducing visibility can be challenging, even if you drive slowly, because the vehicle coming at you usually isnt slow! What was keeping me happy though was it's hydraulic steering which even at slow speeds isnt devoid of feedback and neither is it too light! Also, compared to the first-generation Innova, the Crysta's steering responses are much sharper. So yes, you can manoeuvre faster and more accurately in tight spots.

On Day two, we planned to head to Jispa covering a distance of around 140 kilometres via the Manali Leh highway. On this leg, I decided to switch seats with Bob and moved to the middle row. Just like the front seats, the middle row is luxurious and comfortable. The wide and well-bolstered seats coupled with the generous legroom allowed me to stretch out gratefully, since altitude sickness was beginning to hit me.

On this particular stretch especially while crossing the Rohtang Pass, we encountered a fair amount of broken roads. The Innova Crysta gets a body-on-frame chassis which is more rigid than the previous model while the suspension gets stronger springs. Over ruts and undulations, the Innova Crysta's suspension did a fantastic job at absorbing the shocks. And its not just that the ride quality is impressive, after that bone jarring ride, not a squeak escaped out of the Innova Crysta! At low speeds the ride gets a bit jittery over sharp potholes but not to the point of being uncomfortable. And then the impressive NVH levels also ensured that all four occupants could stay glued to their favourite playlists. 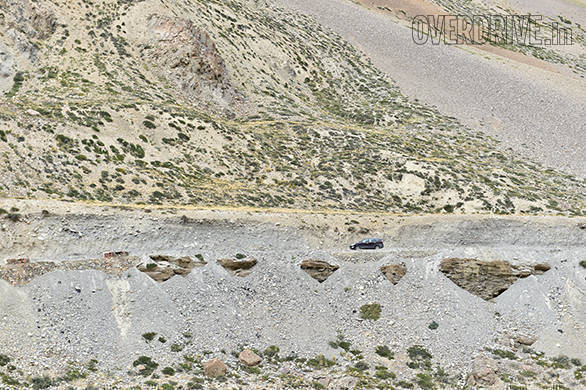 Our KA registered Innova started receiving a lot of attention from the local tourist taxi drivers every time we stopped past Rohtang. Some were keen to find out about the performance of the new generation model and others just wanted to take a quick look and see what the fuss was all about. We didn't mind stopping for quick chats since it gave us an insight into what the local drivers were looking for. The biggest question, and that too despite the Innova's legendary reliability, continued to be about its reliability. Is the new Innova Crysta as dependable, does it feel sturdy, must be sturdy, no? In fact we never got a single question about the fuel efficiency, I guess here in the hills, its not a pressing issue. After all, you can always borrow fuel from a passing vehicle, not a lower arm, driveshaft or oil sump!

Day three was going to be the toughest as we intended to get to Leh city from Jispa. That's a distance of around 350 kilometres which doesn't sound much on paper. But, in reality that is quite a bit especially since we would be covering the four formidable passes-Baralacha La, Gata Loops, Lachalung La and Tanglang La, all in the span of a day. The top of these passes are at least 13,000 feet above sea level while the outside temperature hovers around 5 degrees. At such high altitudes, owing to the lack of oxygen, the performance of vehicles usually sees a drop. On turbocharged diesel vehicles, the turbo lag becomes more pronounced and vehicles don't respond quickly to accelerator inputs.

However, on the Innova Crysta the turbo lag was just barely perceptible with peak torque available from as low as 1,200rpm. The 2.8-litre engine gets three driving modes-normal, eco and power. We obviously preferred to stick to the power mode just to make sure all the 174PS and 360Nm of torque was at our complete disposal. As we effortlessly surged past the local Innova taxi drivers, they couldn't help but let their jaws drop in awe. However, be aware that in power mode, in the hills, fuel efficiency drops rapidly. From Jispa till Leh and back, the Innova Crysta's on-board mileage indicator displayed an overall efficiency of 9kmpl, dropping down to 7kmpl and even showing a healthier 14kmpl while on the Upshi to Leh stretch. 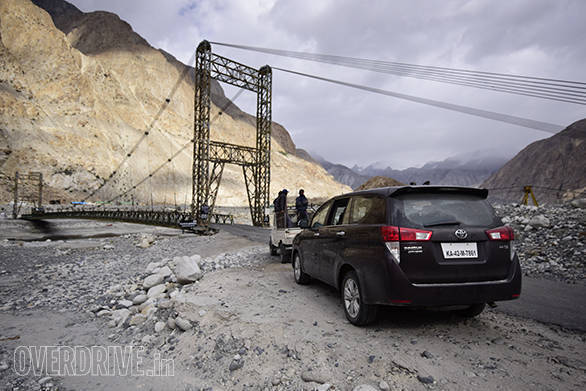 That is quite commendable for an MPV loaded to the gills with four passengers and their baggage. Even the 22 bottle holders, cooler box on the dashboard and various storage bays were packed to the brim with emergency rations. Most were consumed out of boredom and binge eating rather than an actual emergency!

On those four passes, the road narrows down in many places and at times is only few feet wide. The wide turning radius coupled with the large dimensions made it quite a handful especially around the tighter bends. Especially on the Gata Loop which comprises of 21 hairpins, selecting a wide cornering line was crucial. On the faster corners, it rolls a bit but is acceptable for a vehicle of this size and class.

By the time we reached Leh, the Innova Crysta had instilled so much confidence in us that we decided to head to the mighty Khardungla La the very next day. The Khardungla La pass is located at a dizzying 18,314 feet above sea level. It is commonly known as the highest motorable road in the world, but of course more modern measuring technology puts the Chang La pass on the road to Pangong lake higher than Khardung La! Nonetheless getting to the top of Khardung La is tough, on some sections the road is narrow, in others the top layer has washed off with the summer melt, in other places landslides have destroyed the road. There are enough obstacles looking to damage the underbody, probably even rupture your oil sump if you're not careful. It's not uncommon to see vehicles abandoned on this route. What's amusing is to see small cars getting towed by Innova's but these vehicles are literally the lifeline of this region. That's when I realized how good a package the Innova is. As I settled into a well bolstered seat in the middle row, head pounding, gag rising and breath rasping from a bout of altitude sickness, sleep quickly overtaking my other senses, my thoughts were on the guy who designed the seat and the guy who thought about how much support it must have. Perhaps they too had driven all the way up to Khardung La!

We completed the roughly 1,600km round trip from Chandigarh to Ladakh and back in a week's time. The stock Bridgestone's performed flawlessly despite being subjected to a fair amount of abuse. There was not even a single puncture. Nor did the Toyota Innova Crysta develop any mechanical or electrical issue. It scoffed at the conditions, took us over broken roads, rocky surfaces, water crossings, high mountain passes, slush and everything that Ladakh could throw at it. Not even a belch!

From sea the sun, the new-generation Innova Crysta is on a plane superior to its predecessor while continuing to offer bullet-proof reliability. It has raised the bar, a wee bit higher, than even Khardung La!