Some consider the 24 Hours of Le Mans the greatest motor race in the world, because the cars on track battle it out fiercely over 13km long kilometers. And also because of the draw it has for the fans, some of whom come from all over the world and rough it at the campsites despite the fact that it's pouring down on them. As race day kicks off, though, the focus shifts to pure racing.

The calm before the storm

Well, we aren't really sure whether we ought to really call it the calm before the storm. But while the drivers and teams are getting ready for the big race to kick off at 3pm, the fans manage to have a bit of fun. Some of them of course rush into the tribune - the grandstands that overlook the start finish straight and grab the best spot possible. Others relax, some sober, some already inebriated. Still more wander around taking in the automotive marvels, memorabilia and art that you're only likely to see at Le Mans. We spotted some automotive art, some spoiler shelves and some helmet seats on sale the morning of the race! 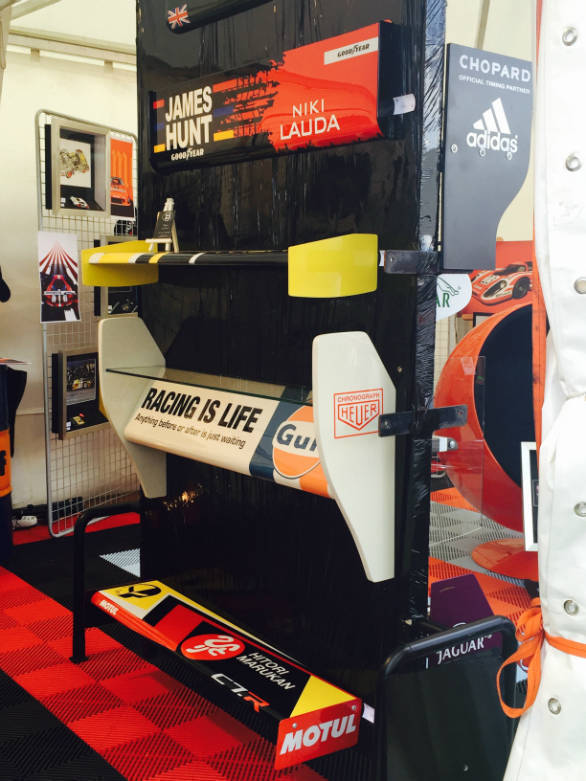 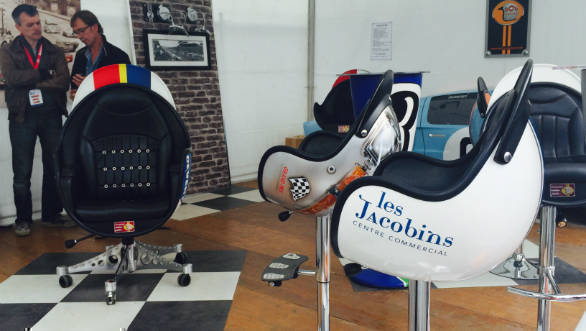 On the one hand the grid before the race in packed. It's got team personnel around the cars, the drivers and mechanics too. And it's also got everyone with a pass that entitles them to go out on the grid. Plenty of crowd and an atmosphere that is unforgettable. But it's at this time that the fans set up. You'll find the grandstands will have filled up entirely. Fans will have set up seats ahead of the race at their favorite corners and there will be simple no place to move if you haven't already saved yourself a spot. 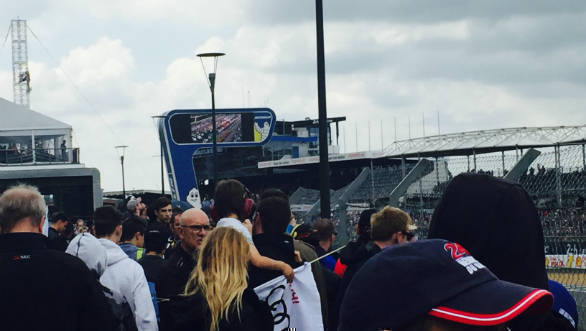 Things get going at last

What we spotted this year was that since the rain started coming down in buckets just before the race, the umbrellas came out, of course. But watching the start of the race is very important. Which means if you don't have a good vantage point, there's no sense getting wet in front of a corner, just to see cars going around in a procession behind a Safety Car. It makes much more sense to find a seat and station yourself in front of a screen and get wet there instead. So when the Safety Car peeled off into the pit lane after what seemed like an eternity, the fans were soaking wet, but cheering loudly! 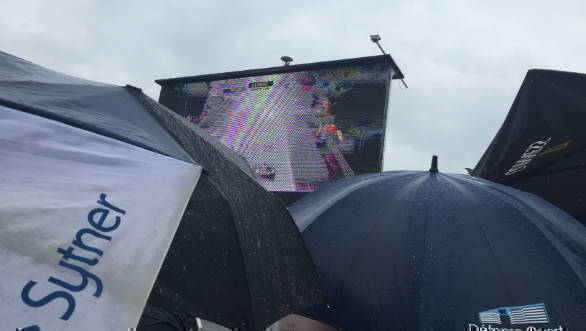 Well the commentary at Le Mans is all in French. So unless you want to follow live timings in addition to watching the race on track, the best thing to do is to buy yourself one of these handy Radio Le Mans earpieces that will give you access to English commentary so that you won't be floundering. And wondering why that Ford GT is still in the pits and why that Toyota LMP1 has stopped for an extra tyre. 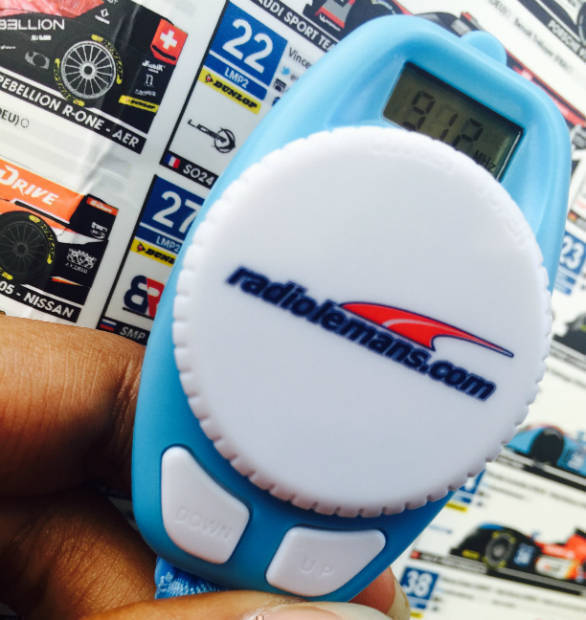 What you should do is make for the grandstands at around 18:00, which is approximately three hours after the race has kicked off. That means that the crowd will have thinned out a little, and you'll be able to get a good spot to watch as cars come down the start finish straight. From there, it's time to begin you're tour of the track. So walk to Ford Chicane, wander over to Indianapolis and Arnage, and catch the cars coming by. Sometimes you even get to spot some interesting overtaking moves. 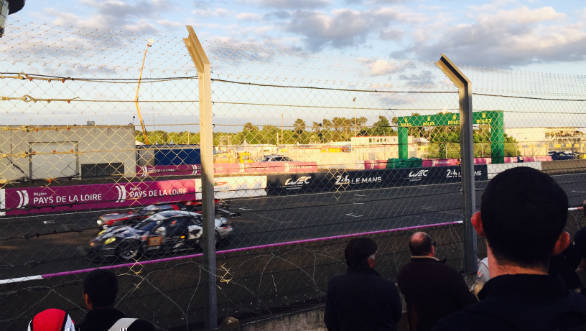 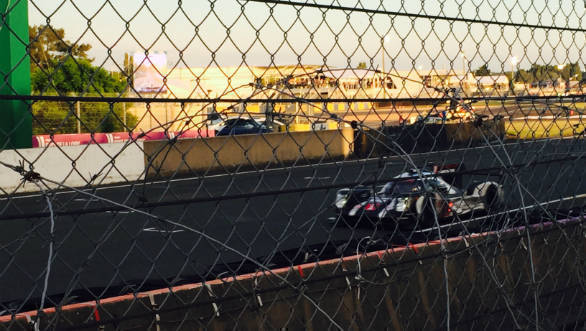 The fair and the Ferris wheel

I've been to Le Mans twice before. Both times I've looked longingly at the Ferris Wheel from afar and wondered what it would be like to watch the cars zip past from such a great height. This time around I finally managed to make it to the Giant Eye that looks over Le Mans and actually get on the ride. It costs 10 Euro per person. Gives you a terrific vantage point to look at the track and also the campsites and realize the sheer enormity of the event and is an experience that is unparalleled. I highly recommend it! 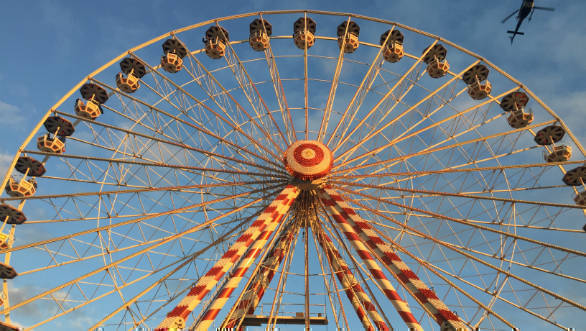 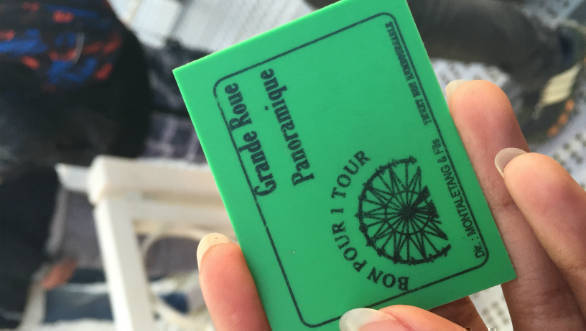 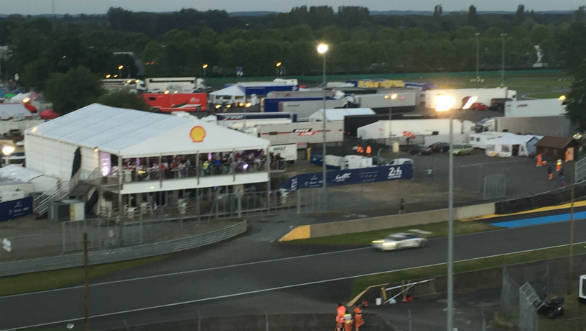 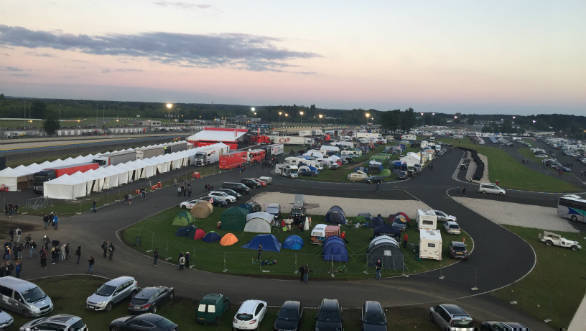 Sometimes the fans at Le Mans are so completely zany, that it is impossible to take pictures of them. Primarily because they are usually drunk, and if they spot you taking photos they get a bit wild. So while I didn't manage to take pictures of the chaps dressed in suits with the Union Jack printed on them, and while the men dressed as little old ladies on scooters were far too fast for me to catch, I did manage to get a snap of the organization they belonged to. The picture says it all! This lot at Ford Chicane even had their own grandstand assembled! 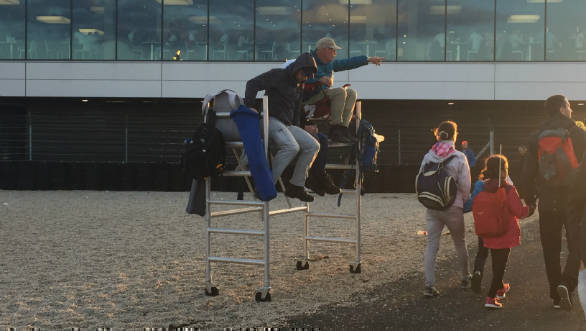 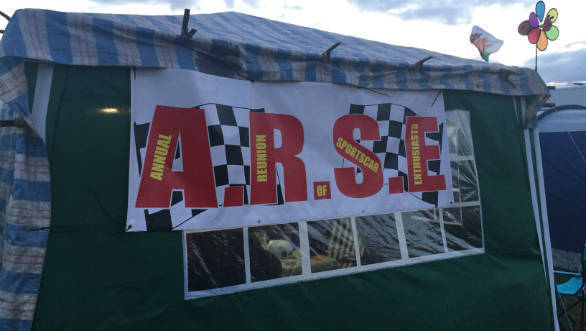 Chaters is a UK based store that specializes in Motorsport and Automobile literature. They have a stall at the 24 Hours of Le Mans every year, and if you like everything automotive and Motorsport, this is paradise. Sorry about the haze photograph, but this is the place to get that long desired copy of Niki Lauda's autobiography, and Denis Jenkinson's fine work on the art of driving a race car. Don't miss it. 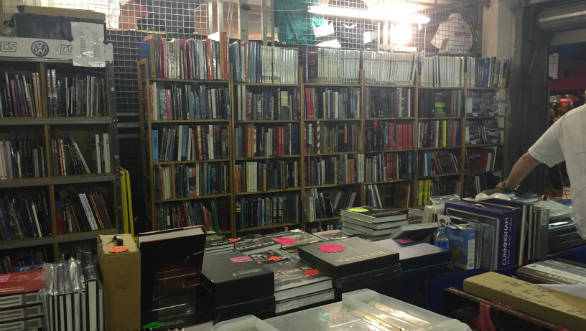 Le Mans steeped in the shadows of the night is simply our favorite time. There's nothing quite like it. From somewhere in the dark, depending on what car you're watching, you will hear a howl, a growl, a banshee-like wail, and you'll see a pair headlights glowing in the dark, and then before you know it, in a flash of sound and light, that LMP1 car, or that GTE machine, will have whizzed right past you. We got goosebumps watching the cars head into Dunlop Curve! 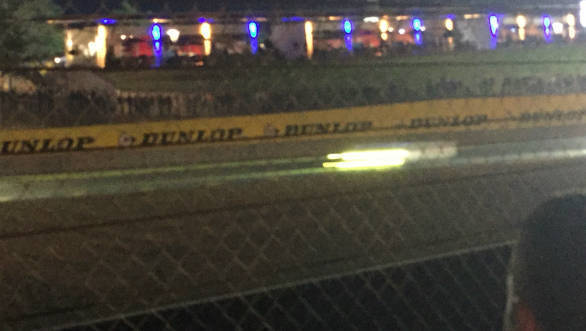 Where the fans will be

One of the reasons that the fans disappear from the grandstands once it's night is that it gets pretty cold. That doesn't mean that they aren't following the race eagerly. A lot of them will have drifted to the Le Mans village, where there's a big screen, plenty of food and drink nearby and company to keep spirits up. This was the crowd we spotted at around 23:00 Saturday. 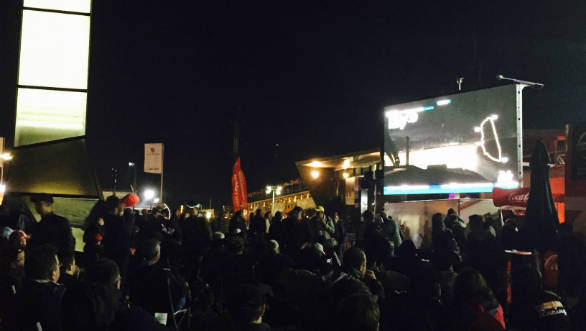 The paddock and the pit lane

We stopped by the paddock at midnight and it's fair to say that there isn't a moment when people pause for a rest. There's simply no time. The place is buzzing with activity. One young selfie hunter chased down Patrick Dempsey for a quick photo with him. Mechanics were driving spares on quad bikes through the paddock. We spotted a very determined Hans Joauquim Stuck walking past in his Porsche gear like a man on a mission. And we also saw and felt the tense atmosphere on the Audi pit wall. With one of their cars not in an ideal position, Leena Gade had plenty of work to do to make sure here drivers get a decent result from the race. At Le Mans, there's no rest, no respite and no room to relax! 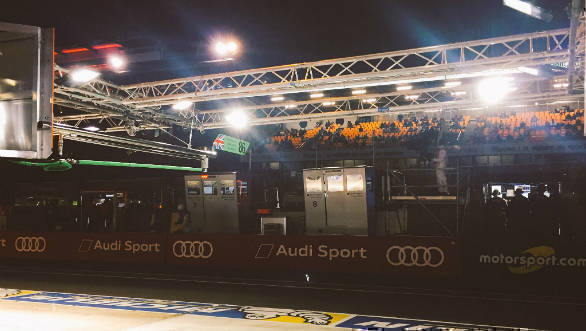 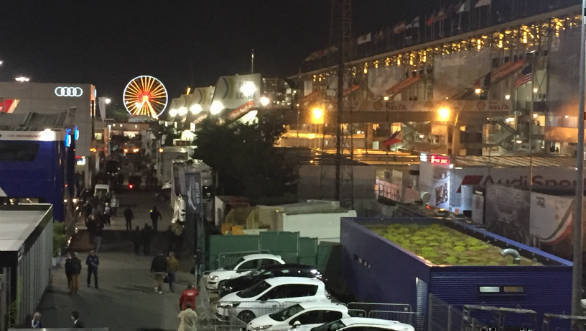 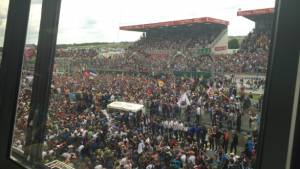 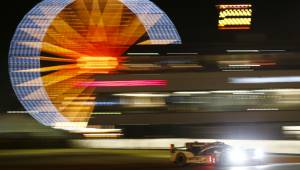 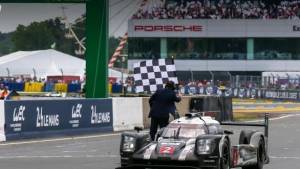