Shumi's been raving about the KTM 390 Duke ever since he came back from Salzburg. All of us here at OVERDRIVE can't wait to have a go at the new motorcycle too. Now, the 390 Duke might look identical to the Duke 200, but beyond the similar styling, the new bike is quite different. Besides making a lot more power, it also sports some nice tech. But, the one thing that caught my attention was the Nikasil plated bore. Let me explain. One of my fondest childhood memories are of my uncle's black KB125. And one of the most interesting bits of the KB was that aside from bring a stellar handler; it also featured a chrome plated bore. Of course this meant that serviceability went for a toss if you had an engine seizure, but at that time it sounded like magic. The chrome plated bore is now old technology and the more recent high performance engines now feature Nikasil plating. 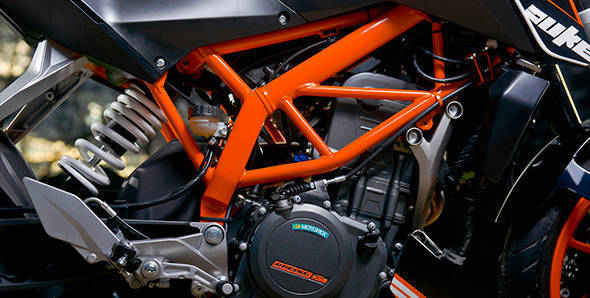 Nikasil stands for Nickel Silicon Carbide. Silicon carbide in itself is a compound used to produce hard ceramic but when it is chemically bonded with nickel, and electroplated on the aluminium cylinder bore it makes for a highly wear resistant and low friction surface. So, besides the obvious benefits of very low friction and low wear and tear, Nikasil plating also allows for very large bores without modifying the size of the block a lot. Traditionally, most engines use a cast iron sleeve that is placed inside the block at very high temperatures so that when the block cools down, the sleeve and block becomes pretty much a single unit. This means that the size to which the cylinder can be bored out, as a result, is not very large. Meanwhile, when you electroplate Nikasil on the bore you can afford to get a larger sized piston without compromising on the strength of the block.

There are some disadvantages though. Back in the two stroke days when rebores and oversized pistons were common, the KB suffered because if you seized the engine, you had to replace the entire block. Which will be the case for the 390 Duke as well, I'm afraid. There is also another warning - Nikasil is well known to react badly to sulphur in petrol. But now, in the age of unleaded fuel that shouldn't be one of your concerns.