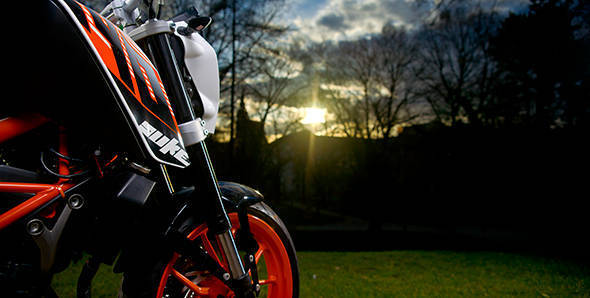 Is the 390 Duke actually wearing the Duke 200 chassis, then?

The short answer is yes, in most aspects the KTM 390 Duke and the KTM 200 Duke are the same. I asked KTM R&D Manager (Street) Sebastian Sekira how the base KTM 200 Duke's chassis deals with the extra cornering forces and engine loads. He said that the biggest loads on a motorcycle chassis do not actually come from the cornering or acceleration related loads.

The biggest loading comes from sudden potholes for instance which cause a lot of torque buildup on the chassis. And they discovered that the 200 Duke's chassis was more than capable of handling the loads. Which meant they would work with the same chassis keeping in mind the brief that KTM's 390 Duke had to be a light and fast motorcycle.

What loads does the chassis face?

But first let us understand these loads thing. When Erik Buell started working on making a sportsbike based on a Harley-Davidson engine, he quickly traced handling problems to the fact that the vibration was causing the wheels to not be in a straight line. His solution was to invent his Isoplanar system that suspends the engine so that vibration is contained and not passed on to the frame in significant quantities.

In a normal motorcycle, similarly, the cornering forces, acceleration (both braking and on throttle) forces all load up the chassis. If you imagine the force as being applied to the centre of gravity, hard braking effectively pulls the front-end down applying a levered force on the centre of the gravity. Effectively it tries to twist the frame. The forces can try to twist the frame in all directions depending on their directions and quantities and that is why a rigid frame is considered critical to good handling.

KTM has always favoured the trellis frame as a light and strong solution to resisting these forces and that is why the 200 Duke and the 390 Duke use trellis frames also. In the case of the KTM 390 Duke, the suspension is the same -  43mm upside down forks at the front, also tuned by WP (KTM's suspension specialists) and manufactured by Endurance in India, ditto the direct mount rear monoshock.

The difference is in the settings. Remember that we are talking about a chassis package that now has to handle much higher speeds (top speed is officially 160kmph) and that also means corners will taken at higher speeds which means more sideways loads. Further, bumps in faster corners mean the suspension has to work harder to ensure the tyres stay connected to tarmac so that steering, throttle and brake inputs can be effective in controlling the motorcycle.

How does suspension work?

As you can imagine, suspension settings in the simplest terms are a combination of four things.

Preload - this is the load on the spring when the motorcycle has no load upon it. The actual free length of the spring is already compressed. Preload is used to ensure that appropriate suspension travel is maintained to absorb shocks under load. Which is why you should move to a higher preload when carrying a pillion so that the spring compresses less and you still are able to absorb shocks easily.

Spring rate to keep it simple determines the stiffness of the motorcycle to a large extent. A stiff spring will allow the wheel to move less into the suspension travel over a bump. This is an asset to a sportsbike rider but not for, say, a motocross bike. It is a design decision.

Compression damping - which is how fast the spring compresses when the wheel goes over a bump. Soft compression will use up a lot of suspension travel but give a smoother feel. Hard is the opposite. Soft suspension can also causes the motorcycle to feel slower to respond and less assured at higher speeds.

Rebound damping determines how the damper controls the speed with which the spring regains its normal length after being compressed. Soft rebound damping allows the shock to extend quickly back but can feel jerky and jumpy while hard damping may feel great on a smooth road but can prevent the shock from being ready to absorb the next shock.

How the KTM Duke 390 differs from Europe to India

The combination of these settings will be different for the 390 Duke for India versus the one that will be exported from Chakan to Europe. The reason is simple - Europe has smoother roads overall so a stiffer suspension setup can easily take care of the needs while India's variation in road quality requires a softer setup. We have not tested the Indian setup at this point but I am sure that if we tried the Euro setup in India, the bike would feel jittery and very often a succession of bumps would feel seriously upsetting.

The Indian setup will be on the stiffer, sporty side as Indian motorcycles go, that is certain, but it will not be as stiff as the European setup. The springs themselves aren't different but the shims are different and damping and rebound damping will vary.

The KTM Duke 390 gets new tyres

The biggest difference, though are the tyres. The KTM 390 Duke will come with Metzeler Sportec M5 tyres. Both in Europe and in India. The Bajaj ProBiking setup will stock these for times when you have worn them out too. Sekira explained that the MRF tyres are actually very good and there was the initial option to continue to use the MRF Radials. But the higher speeds of the 390 as well as its more premium nature demanded more. The M5 is that premium tyre and Sekira reiterates that the biggest advantage will be seen in the wet where the Metzeler offers significantly more grip.

Riding in Europe, the biggest difference I noticed immediately between the 200 and the 390 was the noticeably extra stiffness you sense. It feels like you're handling equipment has the same weight, but is more rigid. Since the engine is a stressed member of the frame and the engine mounts and weight is new, I am sure it contributes to this feeling. I won't comment on ride quality because it won't be relevant. But when canted all the way over to the edge of the tyres, the combination of the chassis and the new tyres takes a little bit of getting used. As in, you retune your sense to take in and interpret the information that the chassis is sending back to you. Once you do, you sense an agile, responsive chassis that is able to make the most of its considerable grip. The tyres feel stiff in structure and are extremely grippy which means long sweeping 140kmph sweepers are dealt with swiftly and confidently. Give it 15 minutes of acclimatisation and the 390 Duke is a storming little cornering demon that will plant a big smile on your face.