The Great India Drive with the Hyundai Creta

If you are from the plains and have been to Leh, returned home without experiencing any natural or artificial calamity, you will not only have the sense of achievement that travelling to Leh brings with it, but you may have a new level of confidence in your luck and your health. If that happens, you start taking things for granted and then things can go wrong. In fact, there are only a few things that can go wrong in the Ladakhi region of India  weather, temperature and the state of the roads. But even if one of the three is in a foul mood, it could pose a lot of problems. 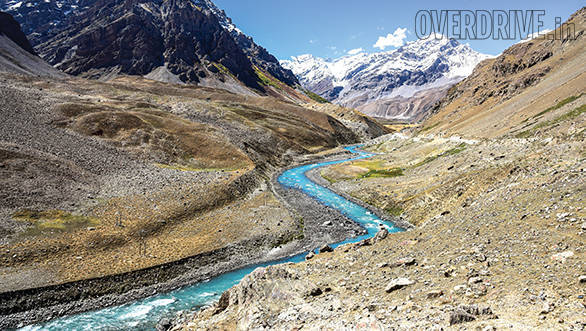 We got a chance to ride up to Leh on two motorcycles, the Ducati Scrambler and the Triumph Bonneville. But by the time we were close to the peaks surrounding Leh, the temperature decided to go from 30 degrees hot to minus four and just for fun, the clouds decided to join in with ice-cold rain. So by the time we reached the venue to pick up the Creta, we were wishing this was just a bad dream. But it wasn't. The skies opened up the next day, Hyundai handed us the keys to the car and I was elated to take charge of a vehicle inside which I could enjoy the comfort of warm air in my face if things went cold again. But that also quickly nursed the dwindling over-confidence of being able to tackle Leh and another misjudged plan came to mind. Why not start the road trip with Khardung La? After all, it was less than 50km away and the skies looked good. 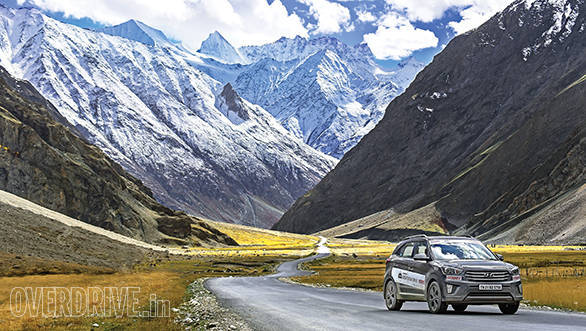 But that is the beauty of the Ladakhi terrain. It looks beautiful no matter what the natural conditions are and it just lures you in. Like a venus flytrap. We started driving up to the pass. In all my trips to Khardung La until now, I have only seen snow on the peaks that poke the horizon. But this time around, it was right on the side of the road, spread over the rocks and whatever little fauna that grew around them. On the horizon, the sky had only streaks of blue. I knew Khardung La was going to be very cold. The instrumentation was displaying an ambient temperature of three degrees so ideally, this needed to be a quick stop at K Top  just time to take a few photos and get back to mainland. But the optimism was short lived. Up near the pass, the snow accumulation had necessitated the need of bulldozers to clear the tracks. That led to the tourist cars bunching up and within minutes there was a jam that spanned more than a couple of kilometres. We had no other option but to turn back. The relatively smaller size of the Creta allowed manoeuvring through the jam without brushing its sides. Any other SUV even a few inches wider like the Santa Fe, could have picked up scratches on its way out. 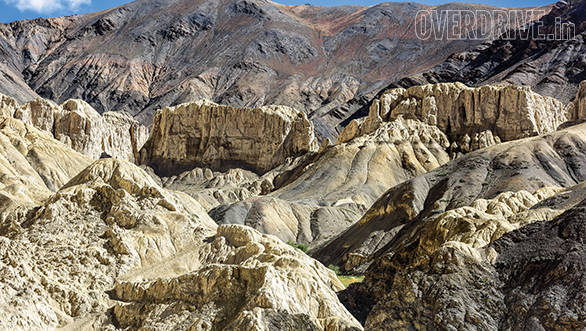 We came back to our hotel, spent the day hoping that the next morning would be better. But the pass was still shut. Since the weather had become too unpredictable, there was no point in staying any longer and so we began the road trip back home. We had two route options  first was the tricky but more picturesque drive through Tanglang La, Jispa and Manali and the other was the faster drive through Kargil, Drass and Srinagar. We were rooting for the first option, but the rains on the previous two days had apparently worsened the road than what we had experienced during this year's Independence Quattro Drive in August with the Audi Q cars. More so, no trucks or vehicles had entered Leh from that route in the two days that we had stayed there, so the locals were advising against taking that road as the conditions were unpredictable. 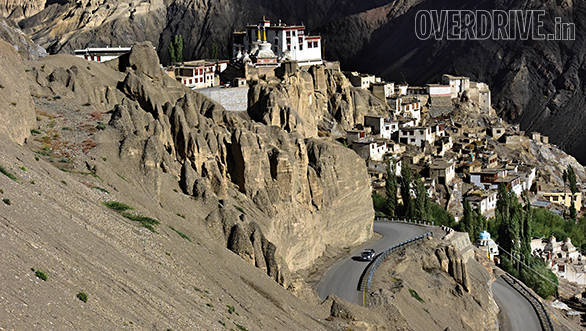 We stuck to the second option then and set a target to reach Drass before nightfall. The skies were clearer and as the IAF's MiGs were tearing through the clouds that morning, we sped through the twists and turns to cover as much ground as possible before lunch time. Lamayuru, a town known for its monastery, is the first major stopover on the way back. The roads are lovely, but have sudden elevation changes and broken patches, gravel and pieces of rock when you least expect it. The landscape is breathtaking. From the hillocks and open land around Leh and the More Plains, the terrain transforms into tall rocky mountains and hillocks that look like molten white chocolate. The locals call it Moon Land (a name I would rather give to Zoji La for those craters on the roadsides). You can't grasp its beauty while driving through the twisties. You have to stop and take a deep look at the landscape. Post Lamayuru, the road is lovely all the way till Kargil with twisties spanning across the mountains. The last 25km before Kargil though are all broken. Though it wasn't a big deal for the Creta, the narrow path slowed down the pace for the traffic. By the time we could reach Kargil, it was nightfall. 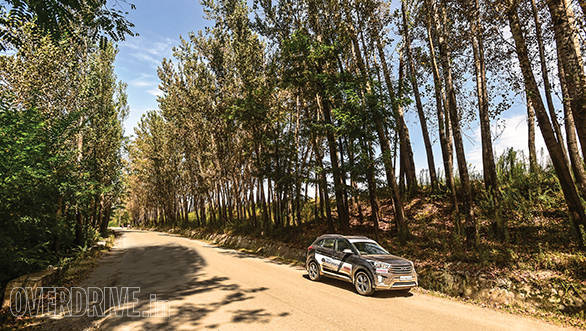 The Drass plans did not happen. So we decided to leave early and reach the aromatic bakeries in Drass for a good breakfast. We did make it in time, but the menu at the bakeries had temporarily changed since it was the Eid weekend. So instead of the buns, patties and cakes, all they had stocked up were biscuits and namkeen. That wasn't breakfast! So we continued on in search for something fuller to eat. Talks started within the team of some lovely mutton rogan josh at Sonamarg on the way to Srinagar. And just as they were heating up, we were stopped by some army officials. A reputed army officer in the area, who happened to be a friend of an ex-armyman we met in Leh, had heard of our road trip and wanted to wish us luck for the same. He invited us in and treated us to some lovely lemon tea, biscuits, his birthday cake and guess what, namkeen. But that tanked us up nicely for the time being and the rogan josh plan was on! The only thing in between was the mighty Zoji La. 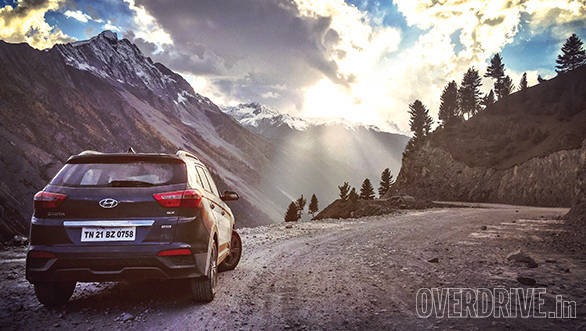 Dark clouds were reappearing over the mountains and you don't want to be stuck in Zojila when it starts raining. It is prone to landslides, the road practically is nonexistent and though the path is wide, it offers little traction. It isn't a big deal for a car like the Creta that has traction control and ABS, but for overloaded pre-historic trucks, it is a nightmare. And you don't want to be in the way of that nightmare. We dropped the pace and treaded steadily through the rough pass only to be welcomed by a lovely sight of the sun coming back and cutting through the dark clouds. I went, "Wow", but Suresh said, "I have seen better versions of the sun in the Zoji La, but this has to be the best condition of the road in Zoji La ever." And here I was, hoping that we don't puncture the tyres or damage the suspension. But we faced no hiccups.
We reached Sonamarg, but because the tourist season had almost come to an end, the hotel we wanted to eat rogan josh at, was shut. So much for all that build-up. We grabbed a quick bite elsewhere and continued to Srinagar. Since our authorities believe that jamming the Internet is a great thing to do during festivities, we had a hard time searching for a good hotel deal, but luckily we found a place adjacent to the Dal Lake, that was not only nice to stay at, but which also offered the complete range of Kashmiri Wazwaan cuisine. 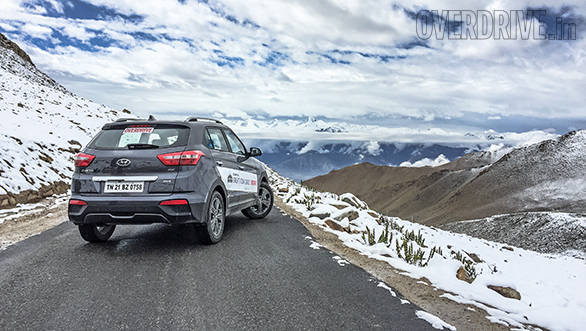 The next day, we drove on till Jammu where we spent the night. By now we had enough of the mountains already. But that feeling was short-lived. For next morning, it was back to the straight highways, the honking of the trucks and the constant scare of the kamikaze pedestrians and their domesticated animals crossing the highway. The day then, panned out like a long video game. Dodging and swerving responsibly through all this, we reached New Delhi. We had been through multiple terrain and weather changes by now but we did not have any close shaves with mishaps. But while leaving the hotel in Delhi the next morning, we almost got t-boned by a jacked MPV.
Suresh, our photographer, who was a resident of Delhi until he re-joined OVERDRIVE, wanted to pick up some of his belongings from his previous residence. But the stuff was big enough to demand dropping the second row and stuffing the last bit of cargo space possible in the Creta. I was worried how it would affect the dynamics of the car. But as soon as we joined the highway to Rajasthan, I was pleasantly surprised. With the full load, the suspension actually felt much better. The ride was a tad stiff and the brakes needed a bit more force, but the car didn't feel as bouncy anymore. We spent the night in Jaipur and continued to Gujarat the next morning. The highway towards the exit of Jaipur has long sweeping turns, since it is cut through the Aravali Mountains. The stiffer ride certainly helped there. It was another major change in landscape. Gone are the days when Rajasthan looked barren and dry. 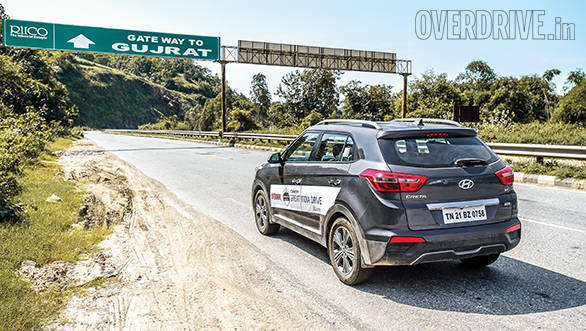 The Aravalis were plush green and the water bodies along the highway looked fresh. But the outside temperatures were soaring high again. With the air-con running, the cabin didn't feel unpleasant. But the moment we stepped out for lunch, chilled buttermilk was the only thing that came to mind. Looking at the Tamil Nadu plates on our car, the dhaba owner talked us into trying daal-baati and churma. Daal-baati consists of a spicy lentil preparation (daal) which is to be had with roasted dough balls (baati) and then you calm your burning tongue with the sweetmeat, churma. The meal was quite heavy and we did not need any further refreshment breaks until evening. The highway was empty for most of the day and before we knew it, we had already reached the well-known Ahmedabad-Vadodara Expressway. From here on, the journey became much simpler. The national highway is wide and quick throughout Gujarat and by nightfall, we entered Mumbai.
It was familiar territory again, but the car looked out of place. Not only because of the all the decals and the OVERDRIVE branding on it, but also because it was carrying bits of the different kinds of terrain we had been on. It was covered in white, brown, red and violet dust. And thanks to Suresh, we had so much stuff that the car looked like it had been on a world tour - since globetrotting SUVs are suddenly becoming popular these days around Mumbai. But the journey doesn't end here. This was just the first leg and more is yet to follow. 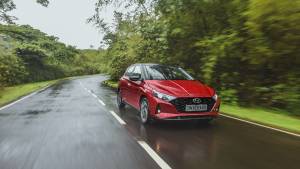