Royal Enfield, Norton and the return of the British motorcycle

Norton's Stuart Garner is an extremely likeable man. He's optimistic and positive and he's brought his company through a hard phase to a place which many naysayers said nay to. In that sense he's similar to Royal Enfield CEO Siddartha Lal, right? So I couldn't believe my luck when I got to be the fly on the wall. We were at the EICMA show and Garner and Arun Firodia, chairman Kinetic Group, had just announced the bones of the new joint venture between Norton and Kinetic. As the press melted back into the halls, Siddartha 'Sid' Lal walks in - he knows Stuart well and there's obviously a lot of common ground, both professionally and personally. 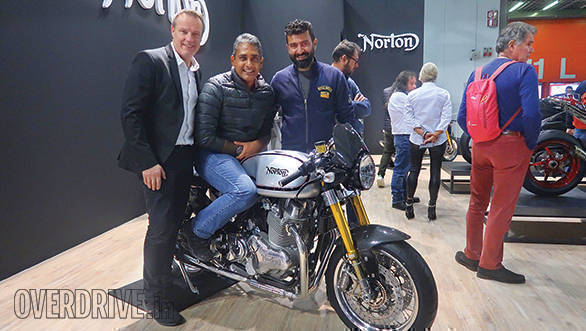 Stuart Garner and Siddartha Lal, CEOs Norton Motorcycles and Royal Enfield, respectively, make sure I cannot climb off the Commando Cafe Racer without listening to their tales of derring do. Or that's what I'd have you believe

The conversation was interesting enough but something Stuart said struck me. I think it was, and I paraphrase, "It's the rise of the British Motorcycle." referring to his company, Sid's baby, Brough Superior and so on. That got me thinking.

See back in the day, the British motorcycle was the one to have. The Italians were sexy but they broke, and the Americans were large and heavy. And the Japanese had just started out - they were very far away indeed. It was the British bike that found the best balance and there were many coveted brands and what a vibrant industry this was. The first Japanese bikes were laughable, at least to the established British world. They looked misshapen and they were meek. Not that the Americans took them any more seriously. Or for that matter, the Italians.

But we know what happened next. The meek Japanese motorcycles slowly took over the world, selling their accessibility, their reliability and their prices as the increasingly desperate British attempts to compete came to nought. Now let's look at the Stuart-Lal British motorcycle resurrection, shall we?

Our motorcycle has gotten complicated. The role goals for them are ever narrower and we generally look down upon the general purpose motorcycle. Some gloriously capable machines have disappeared in our race to purchase ever more focus in our machines. This race has also made motorcycles harder to ride and enjoy - you need more skill. And I'll be the first one to say that many of us relish that challenge every single day. But it has also made our motorcycles suited to specific environments where they truly shine. You have to take that Daytona or 959 to a racetrack to really feel their glory, for example. And then there is the expense. Of buying them, of keeping them running, of fixing what's broken. 200PS challenges your sanity. 200PS with electronannies challenges your banker.

Stuart and Sid's bikes offer an alternative proposition. And it's easy to dismiss as a cunning, irritatingly low-hanging fruit idea. Sid says, in essence, that not everyone wants the latest, greatest and sharpest. Most riders just want an easy, fun bike at a reasonable price. And we who love our 160PS missiles scoff at the idea of a large engine making small power and reaching 'just' 160kmph. Stuart's machines aren't different. He does have a 200PS V4, but his core bike is a 961cc twin that makes just about 80PS. That's not very fast, mate. We have 650s with exhausts and mods that make more, right?

But I have a niggling feeling that they see a world we cannot, blinded as we are by the flash and glamour of the fast-expensive machine. And that it isn't a mirage. The Suzuki GSX-R1000R, for instance, is truly one of the greatest 1,000cc sportsbikes I have ever tested. It felt shockingly easy and startlingly fast. Both those attributes are easy to engineer. In one motorcycle, however, it is rock hard engineering. But in the same breath that I desired it, I couldn't afford it. 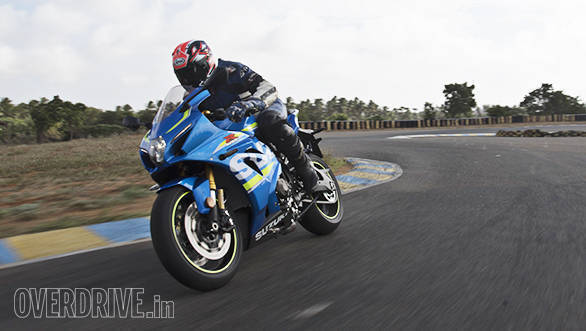 I do have Feroci, my 2016 Ducati Multistrada 1200 S. But my Ducati is the result of an exceptional set of circumstances. If I had a more normal life, I'd still have my Triumph around. Or Feraci, my 14-year old Yamaha would've been my big bike.

The point I am making is this. Just like with the Brit bikes back then, something might be stirring deep in the bosom of the motorcycle industry. Our premium bikes are complex and no one is offering the simple-cheap motorcycle proposition. Stuart doesn't make cheap motorcycles, but he knows what he's up to. He's offering you the luxury of simplicity while offering you top flight suspension and brakes. Which means you'll rumble down the straight at a decent clip but you can corner as hard as you like without worrying that the enormous power output will overcome your modest skills. A bike that goes fast enough for you. Sid Lal works the other side of the coin. Or intends to. He wants to make simple motorcycles with modest performance that speak eloquently to his customers. They strike up conversations of unstressed rides and reasonably fast progress. This sounds silly, I know. Which serious motorcyclist wants this slow-going nonsense, right?

That's what the British said the last time around, I think. 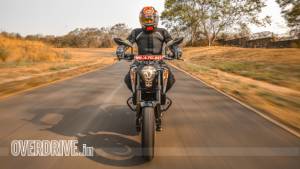