The complete CS Santosh update after Stage 3 of Dakar 2018

There's something to be said for seizing the moment, isn't there? Seizing the moment, after all, is what got CS Santosh to where he is today. The exact moment that this thought occurs to me is when I see the No. 49 Hero MotoSports Team Rally RR450 slowly make its way around the bend, and head towards the podium for the ceremonial start of the 2018 Dakar Rally. Of course, the man astride this motorcycle is indeed CS Santosh (S. Chunchunguppe Shivashankar for those of you who are keeping track of his progress on the Dakar website and are getting a little confused by the fact that his name isn't on there) and he's got a broad grin plastered across his face. On the one hand the grin is plastered across his face because he's realised that there's a handful of Indian journalists waiting for him to come around the corner, lenses and cellphones pointed right at him. It's always nice to have a little bit of support, after all. On the other hand, I believe that Santosh is just plain excited. This is the Dakar. He's a rally-raid pilot itching to give the gruelling rally his all. This is the stuff that he lives for. And it hasn't come entirely easy. 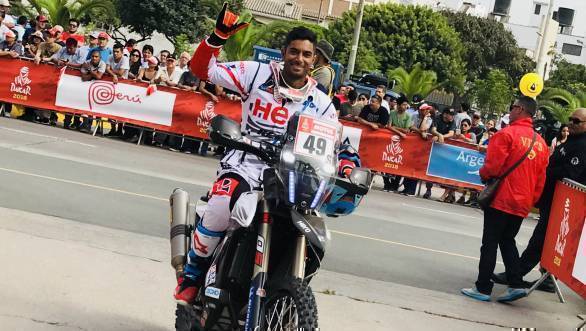 Of course, competing in the 2015 Dakar Rally wasn't the first case of Santosh seizing the moment. Neither was competing in the Abu Dhabi Cross Country Challenge back in 2013. I'm fairly certain that catching a flight to Australia based only on the fact that a rally raid pilot had casually mentioned that if CS ever found himself Down Under he ought to get in touch with him for a lesson or two, wasn't the first instance of it either. Maybe the decision to go about life actively seizing the day was in fact the first Carpe Diem moment that CS Santosh had. Either way, it worked. Those little moments, combined with hard work and an eagerness to learn and grow, have seen him progress up the order. He's gone from a privateer Dakar competitor to full-fledged factory rider, with Hero MotoSports Team Rally. From winging it, to having a physiotherapist at the Dakar, to ensure that all the muscles that have been strained on each stage, can be relaxed quickly before the next stage begins. But more than that, he's gone from a racer who just has to figure things out on his own as he goes along, to a rider with some measure of confidence, who knows that he's well-prepared ahead of the event.

After the first stage of the Dakar, Santosh is 13th. When we saunter over to the Hero MotoSports Team Rally camp at the Dakar's massive massive bivouac, Santosh spots us and comes out of the team van for a little bit. He's got a massive smile on his face, thanks to the superb spot he's finished in - one place higher than Toby Price too. Of course, he's feeling pretty good. "I've asked the team to book me a flight ticket back to India. I'm done," he jokes of how well he's performed on this particular stage. It's been a short competitive loop of 32 km, and he's managed to hold his own. Elsewhere Oriol Mena has made it to 23rd in the stage, and Joaquim 'JRod' Rodrigues has suffered a crash that's left him with a broken wrist. The team is one man down already. 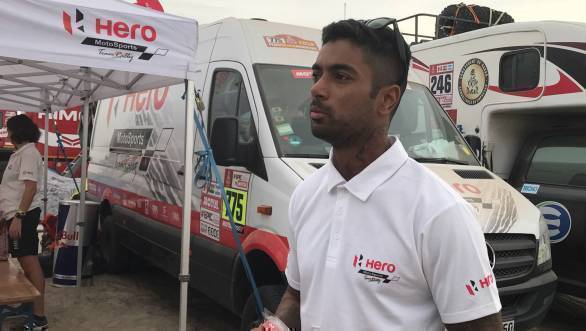 CS Santosh tells us about how despite his strong first stage, there's still a long way to go in the Dakar 2018

"The first stage is always hard," Santosh says, telling us that the nerves had set in before the stage. But the next day is when the Dakar starts properly, he continues, speaking of the first long stage that they have at Dakar 2018 - Stage 2. The good thing about long stages, Santosh tells us, is the fact that there's always time to recover if you make a mistake. There's the chance to correct it and make up time. Unlike on a short stage like the first stage, where a mistake is something extremely hard to recover from.

We're standing on a flat piece of land, watching the riders go by in Stage 2. The track's been dug up pretty badly because of the fact that the cars have gone by first. The motorcyclists don't have it easy. But they're managing. We can see the No. 49 Hero MotoSports Team Rally bike coming over the dunes in the distance. Santosh appears smooth and fast, much like the other front runners that we've seen go past. Between the 2017 Merzouga, where I last had the chance to watch him rally, and now, he's really made progress. Before the start of the rally, Hero MotoCorp's Chief Technical Officer Dr Markus Braunsperger spoke of just how much Santosh has improved physically. It's been a huge amount of progress. "Look at his arms," he tells us indicating that Santosh has bulked up a fair amount. You need a little bit of heft to muscle a rally-raid bike in the desert for 14 days, after all. But there's more to Santosh's progress than just getting physically fit. Braunsperger has spoken to us of just how much the Indian rider has learned by dint of sheer effort. There's a willingness to learn in Santosh - something that's brought him a really long way. 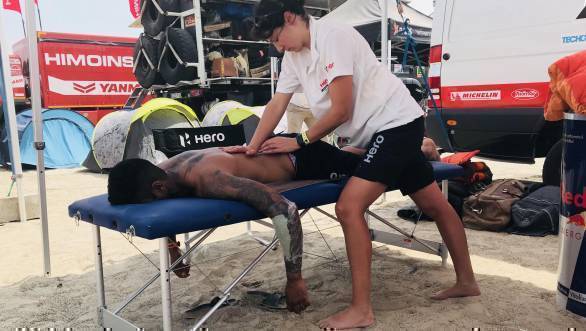 Santosh finishes the second stage, that loops through Pisco, 29th in the motorcycle category putting him 29th in the overall rankings in the Moto class too. Meanwhile, team-mate Mena has made a solid amount of progress - finishing 28th in class and 27th in the general rankings of the Moto class. When we stop by the Hero camp at the bivouac again, we see Santosh getting his physiotherapy done. Earlier, Braunsperger had spoken to us of the physiotherapist they had brought all the way from France specifically to ensure that their riders are in good health once again as soon as each stage is over. "After every stage we just want to get the riders' stress away," Braunsperger had stated. It seems to be working.

For the third stage of the rally, which saw the competitors move from Pisco to San Juan, we stationed ourselves near another set of dunes. There Santosh was, riding down a steep dune, heading past us, and then up another dune and off into the distance. But it seemed like something was wrong as he went by us - he wasn't as fast as the other motorcycles. Certainly not as fast as his team-mate Oriol Mena who'd already gone by (astride last year's motorcycle we might add). Then the rankings came through - Santosh had ended the stage 101st. This, after his rear fuel tank cap hadn't been closed properly after refuelling, which meant that he lost fuel along the way, and eventually ran out entirely with 30km to the end of the stage. "Unlucky for me, the rear tank cap was not closed properly after refuelling and I lost my rear tank fuel before I realized it. Finally, ran out of fuel 30 km short of the finish and had to wait and ask for the fuel from some of the slower riders coming at the back. In the process I lost over an hour's time today. It was not the best day, but I take the positive that I am still in the race and that's what counts," is what he said after what was clearly a hard day of rallying. It's pushed him down to 57th overall**.

Mena, meanwhile, had ridden extremely well to finish 13th in the stage and 20th** overall. And this is before the time refund that he's going to receive for stopping and helping a rider who had crashed in the stage. 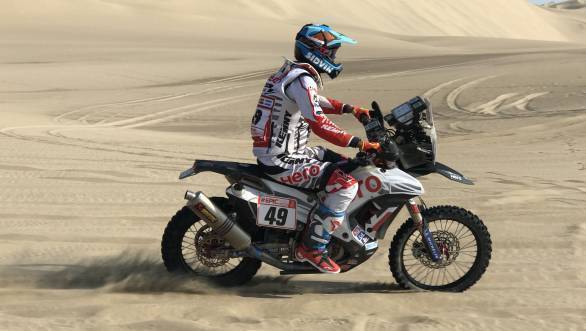 Santosh riding through Stage 3 of Dakar 2018 that headed from Pisco to San Juan.

A month before the Dakar, Santosh had told me, "To have expectations is to set yourself up for disappointment." He'd also said "The moment you win something is very small, but the process behind (the riding) is something he wants to enjoy." Judging by how he seems to be handling the setback that's pushed him down the order to 57th overall in the Moto class after Stage 3, it looks like he's slowly beginning to do just that.

Ahead of the rally Braunsperger's instructions to the team were very clear. "I've said 'Guys, just bring the bikes to the finish line'," he animatedly relayed to us. They're one man down so far. But the other two seem like they're on the right track. Plenty of hours behind the 'bars, yet, for CS "getting there" Santosh and Oriol "surprise package" Mena yet.