Testing the testers: Mahindra gets back at journalists with Off-road Media Challenge

Off-roading. It isn't as exhilarating or fast paced as a day on a race track. Honestly, it isn't anywhere as sexy either; after all, you can't end up ticking exotics off your 'must-drive' list battling slush, or set your personal top speed records for that matter. But, off-roading is no less technical or challenging, and as I found out, it is tremendous fun too thanks to the inaugural Off-road Media Challenge organised by Mahindra. 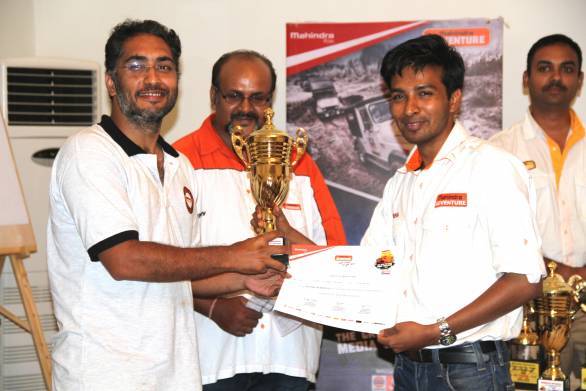 Mahindra as an extension of its Adventure arm already organises various events around its SUVs, including a full blown off-road challenge called the 'Off-road Trophy' wherein serious off-roading enthusiasts from around the country fight for the title of India's best off-roader. The media challenge is designed to be a lot less extreme and is meant more to give us journalists a taste of leisure 4x4 which, by the way, is becoming increasingly popular in India.

The event was supposed to be a two-day affair wherein we'd be driving the Thar around Mahindra's specially prepared off-road track near Igatpuri. Day one was meant to understand the intricacies of off-roading and the criteria on which media teams would be judged the next day on the off-road course. I only arrived on day two, and alone, not knowing that this was a team event and it needed a driver and spotter. And because I had missed the briefing the previous night, I had little idea about the judging parameters or competitive off-roading at all.

Feeling happy about spending a lazy day driving one of the hardiest cars around without having to worry about car damage and the like, I arrived ill-prepared even in the clothing and footwear sense. No khaki shorts or pants. No big boots. And, absolutely no protection for my long term Polo GT against the muck I was going to kart around.

The first challenge was to navigate through a water crossing followed by a challenging and slippery climb, all of which needed to be completed in five minutes. I put my Thar in low, shifted to first and charged through the crossing and the climb with as much speed as I could muster. The Thar and I were thrown about violently crossing ditches and jumps en route. But, I made it through the course in quick time. Sadly, this approach did not help my score too much.

It's only after questioning fellow participants did I realise that speed isn't key to winning an off-roading challenge. It's all about vehicle preservation, about choosing the less beaten track and about making it through in the first attempt while being clean and composed. Safety of both car and driver is equally important, and I would have known all this had I attended the team briefing the day earlier.

Anyways, better armed to take on the next challenge, I made my way up to the slush pit where a Thar was so badly beached, one could hardly see its wheels. This was the 'winching' challenge. The theory was simple ? get a Thar sporting a winch to winch out the beached Thar and take it across the line. The line though was across a steep and slippery climb. And you needed two people to complete this challenge.

So, having joined hands with a fellow journalist, who too had arrived alone, our challenge began. We made a gallant effort (if I may say so myself) to winch the stuck Thar up the climb using power from both the winch and the beached Thar. With gloves on, winch cleanly hooked up and my shoes completely caked in mud, we nearly made it. We got the stuck Thar almost all the way up the slope and farthest than anyone had managed so far. But then the Thar began drifting left down the slope instead of coming up. The harder we pulled, the more it drifted. Eventually we ran out of time. Having learned from our progress and failure, a couple of teams that followed did manage to complete the challenge; clearly, another important attribute of competitive off-roading is to learn on the job. But, overall, we still managed a healthy score.
Now, back on my own, I had the third and final challenge ? the Bone Yard ? to conquer. The course is so named because it is easy to ground the Thar on this course and break a few things on the way. And these parts are left on the trail for drama. It was again a five minute challenge, but this time, I first walked the course and decided the line I was going to take. I also figured out how I would pace myself and what gear I was going to choose so that I don't lose momentum.

Believing I had it all figured out, I made my charge, again in low ratio and in first gear. But, instead of tearing through anything, I stuck to my pre-decided lines and made slow but consistent progress. I made it back without hitting the Thar anywhere and under five minutes. As it was later revealed, I did mange the second highest score in this challenge. And guess what, I did not do too badly overall either, because among 13 teams, team OVERDRIVE, finished 2nd runners up.

A fantastic result I think for a lazy, enjoyable and fun afternoon.