The monsoon is here, and I believe that the rains are a true test of your car's performance. However, with all the traffic, I also believe that it is a true test of patience. It's in times like these that I'm relieved to have an AMT, while most other motorists are frustrated by the slow-moving traffic. Adding to that, the music system's Bluetooth connectivity feature is working now, and I can finally call my father who's recently been accusing me of not keeping in touch. To be fair though, the Bluetooth system was fine all along, and I simply didn't know how to connect to it. What I had to do was hold the 'end call' button until  it clears Bluetooth settings from the previous phone as the system supports only one phone at a time. 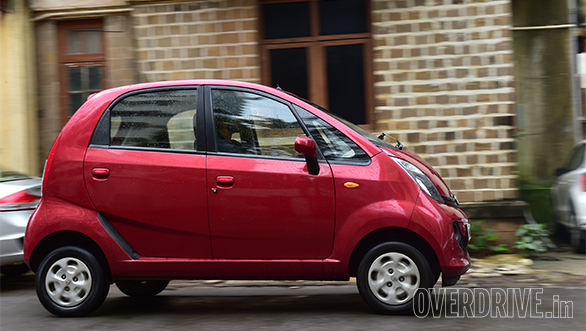 However, with the Bluetooth working, my father now complains of not being able to hear me very clearly. After much investigation, we discovered that the AC blower is too loud and interferes with the sound quality even on the lowest setting. I've had to resort to switching off the AC every time I'm on a call, and it can get a bit hot inside with the windows rolled up. That said, it's still better than using the phone's loud speaker. On the highway, the car is unsettled by the slightest cross wind at higher speeds

I recently took the Nano on the highway for the first time, and I initially thought it would be a long and tedious drive. However, as always with the Nano, I was pleasantly surprised. On a dual carriageway, where overtaking doesn't involve too much effort, the Nano can keep up with other cars comfortably at 80kmph. It even managed to return close to 16kmpl on the highway which is a relief compared to the 11.7kmpl it gives me in town. However, it really kept me on my toes as the slightest cross wind upset stability, making me wish Tata offered airbags. The car's skinny tyres also struggle for traction even in the shallowest of puddles. Speaking of tyres, I recently noticed that one of the Nano's rear tyres had started to wear on the outer edge. When I picked up the car from the service centre after the repairs, I was informed that there was an issue with the wheel hub. However, Tata now says that it was a basic wheel alignment issue. Whatever the reason, all four tyres had to be replaced. Each tyre costs Rs 2,500 and Tata has confirmed that this would not be covered under warranty since it was a mechanical issue with the car that caused the damage. Charges incurred for wheel alignment and balancing amounted to Rs 900. The car also had its routine change in consumables, like the engine oil, oil filter, fuel filter, coolant, gear oil and brake oil. The bill for this summed up to a very reasonable Rs 1,946. With all this sorted, I hope the car lasts through this monsoon trouble free.