Special feature: Chasing the South-West monsoon in the Hyundai Elite i20

It was starting to get really hot in Mumbai, and the monsoon was taking its own sweet time to hit the drought-ridden state. Meanwhile, the people of South India seemed to be thoroughly enjoying the relief that the rains brought. So we decided to head there and follow the rain up north towards Maharashtra. While plotting our map, we decided that we would take the more scenic route and make stops along the way to revisit architecture from the good ol' days. With our bags packed, we headed for Coimbatore. 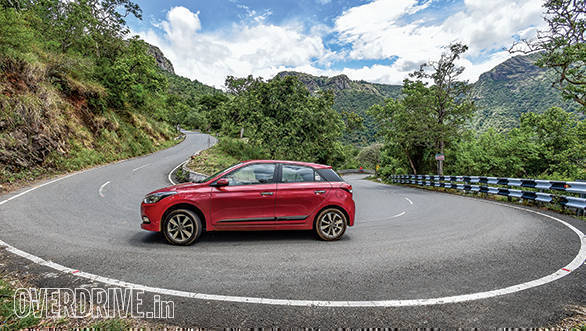 The route we had planned would take us from Coimbatore to Mumbai through the most scenic routes via Ooty and Mysore. Our ride for this trip was the diesel Hyundai Elite i20. This was the perfect car for our 1,300km drive simply because of how efficient and capable it is on highways. The first thing we did when we reached Coimbatore was head to the nearest biriyani joint and ate till we couldn't eat more.

Currently, Hyundai is promoting road safety through its Safe Move campaign. The most basic thing that can save your life is seatbelts. So, as usual, we buckled up and made our way up towards Ooty via Kotagiri. The drive towards the Nilgiri (which translates to blue mountain) was simply transcending, and we couldn't help but stop every 20 minutes to take in the sights. However, the Elite i20 gobbled up the steep, winding roads effortlessly, and within no time we had caught up with the rain and reached Ooty by nightfall. 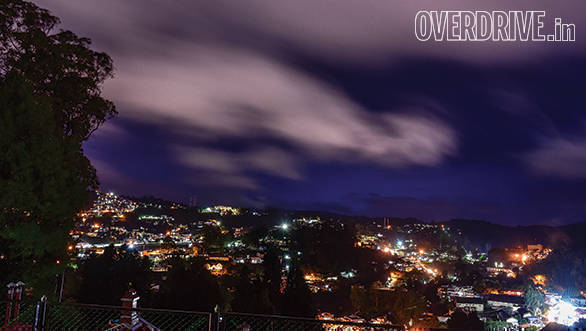 Our stay for the night was at the beautiful King's Cliff Hotel which is located on a hill top. This heritage hotel offers a great view of the town. The hotel was established in 1925 by the British for the British, with a daily tariff of just `8. It goes without saying that it is comparatively much higher now. The hotel has preserved most of its British charm and doesn't even offer electric room heaters. However, it does offer a more authentic experience with a lit-up fireplace in each room. 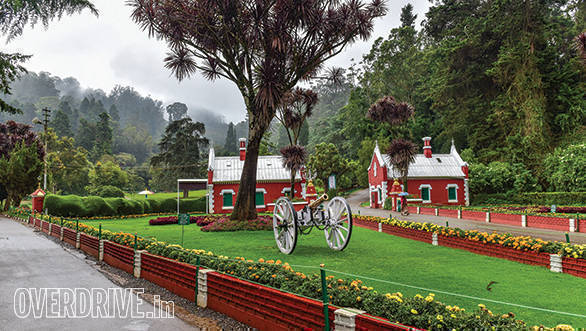 All the various colours at the Botanical Garden in Ooty was made so much richer, thanks to the rains

The next morning we woke up early to find the entire valley clouded with mist and a constant drizzle. While the mist gave an eerie feel to the town, the rain made the trees and the grass look so much richer. We made our way to St Stephen's Church, which was again built by the British for the British back in the 1830s. The most beautiful part of this church is the interior. There is extensive woodwork all around and beautifully crafted stain glass windows which give it a nice charm. Step inside the Elite i20 and you get similar levels of craftsmanship and quality. After taking in all the sights, it was time to hit the road. 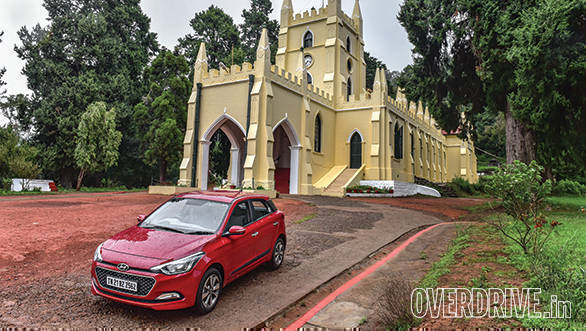 Our next destination was Mysore, which is around 130km from Ooty through Masinagudi and Gundlupet. Although the route is very beautiful, but it can be quite tricky to navigate. The road to Masinagudi is a narrow and very steep decline with 36 hairpin bends, and can be quite dangerous for inexperienced drivers. However, the Elite i20 was a real charmer through the corners with its lovely handling characteristics. 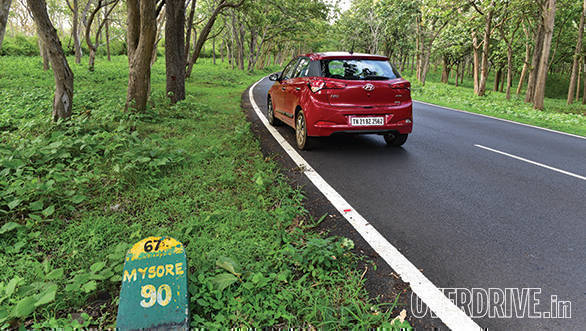 The Elite i20 was a real charmer in the winding roads

Following that, we entered the Mudumalai Tiger Reserve which then continues to become the Bandipur Tiger Reserve once you cross into Karnataka. While Tigers are very hard to find near the main road, you will see plenty of deer, peacocks and an occasional bison or two. The roads through the reserve are quite narrow and have speed breakers at very frequent intervals for the safety of the animals and drivers. However, the journey is beautiful nonetheless and meant to be enjoyed at slower speeds. Besides, the Elite i20's excellent suspension soaked up all the speed breakers beautifully, making the drive very comfortable. 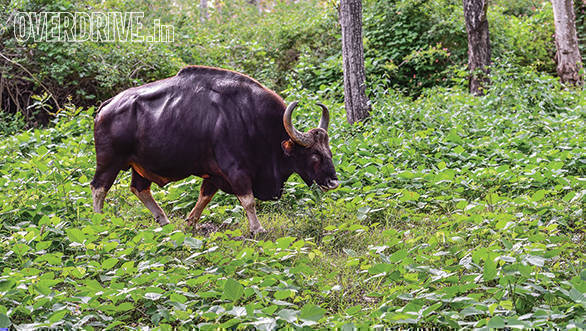 Just driving through the Mudumalai and Bandipur Tiger Reserves, you are bound to stumble upon some wild animals and birds

By the time we got to Mysore, the rains had caught up with us, and we made our way to the Mysore Palace. Situated right in the heart of the city, the palace was built around 1912 and served as the official residence and seat of the Wodeyars  the Maharajas of Mysore. The palace is simply stunning to look at with its beautiful arches, artwork and intricate detailing. It's the same case with the styling of the Elite i20's Fluidic 2.0 design language. Also seen in all of Hyundai's latest cars, this design philosophy carries forward the same level of captivating details and artistic flair but in a far more modern and unique way. The interior of the Elite i20 is so feature rich and luxurious that even the Maharajas would feel right at home. 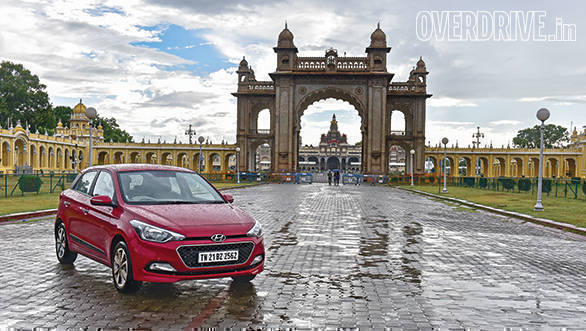 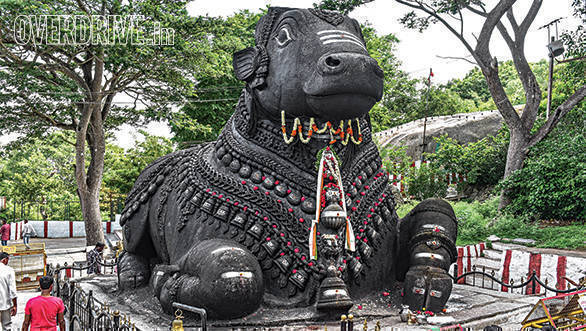 The next morning we headed to Chamundi Hills to visit the Sri Chamundeshwari Temple which is around 13km from the palace. It was a nice drive to the top and is probably best enjoyed earlier in the morning before the crowd gets there. The temple was initially a small shrine built several centuries ago, but over time it was expanded by the Wodeyars to become significantly large. 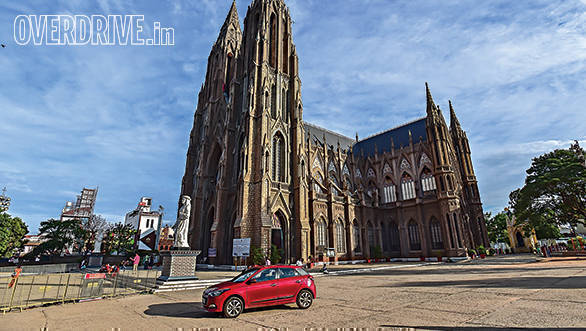 Within the premises, St Philomena's almost feels like an old European Church

The Wodeyars also aided in the building of St Philomena's Church, which was our next stop for the day. This church is built in a neo-Gothic style like the Cologne Cathedral in Germany. In fact, when we walked into the church premises, it almost felt like we were in Europe. Much like, the Elite i20 with its strong lines and curves carries forward a very premium and European charm.

With the rain already moving further up north, it was our time to head back to Mumbai. This time we opted for the faster route to make up for all the time we lost sightseeing and took the four-lane highway. The Elite i20 simply breezed past the traffic and proved to be very efficient with its 6-speed gearbox. However, as we moved closer to Mumbai, the rains had started to fizzle out. Nonetheless, it was a great trip, covering three states in three days. The Elite i20 was the right companion for such a long journey as it was perfect in all conditions  crowded cities, winding roads and fast highways. It's no wonder then that this car, which is made entirely in India, won the Indian Car of the Year 2015 award.

Exploring the Camaraderie of Two Motorcycle... 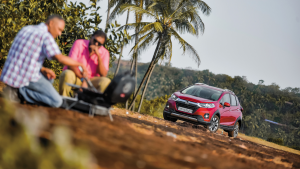 Special feature: Keeping it natural with... 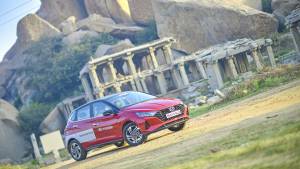