Tata Motors has created quite a stir with its all-new Nexon sub-4m compact SUV. The product looks quite promising, has new engines and quite a comprehensive feature list. However, it will have its work cut out in a segment that boasts the Maruti Suzuki Vitara Brezza as well as the Ford EcoSport. Both these vehicles are the top grossers in their segments and have quite a fan following. The Nexon will be in showrooms this September and here is how it stacks up against the competition - on paper. 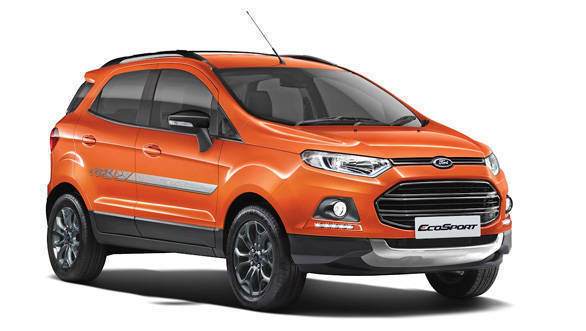 The EcoSport started this segment and still looks fresh. There was a mild update last year and a more comprehensive one is expected to follow this year. It in fact looks compact and alluring. The DRLs add a touch of flair and the overall stance too points towards its crossover breed. The debate whether the SUV will look good without the spare wheel on the boot or not, will continue, however for now, there isn't much to be faulted with this Ford's design. 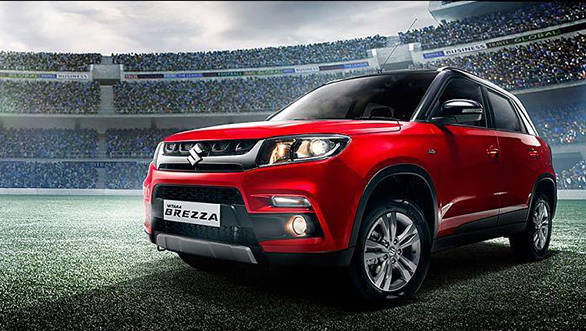 Maruti too have done a good job with the Brezza. It resembles the bigger Vitara to a great extent and that's a good thing. It has the proper old-school SUV stance that buyers in this segment like and features like projector headlamps with DRLs and dual-tone colour schemes add to the entire buying experience. 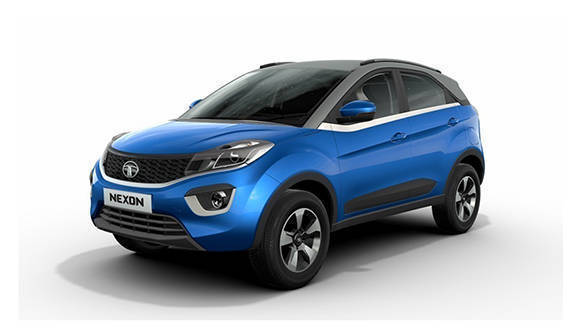 Tata designers have stayed true to the Nexon's concept line and there is no other car in the Indian market that looks like this compact SUV now. It doesn't have the typical SUV stance but will still grab eye balls due to its design language. Not only the front but also the rear too looks radical.

The EcoSport's dash layout is a tad confusing and feels dated with its blue colour theme for the backlight. There are a few storage spaces in the cabin and the seating position too is elevated. The boot space is 346 litres and the boot door opens sideways, the only one in this mix. As part of the safety package, the top-spec EcoSport gets six airbags while the base ones make do with twin units.

Maruti's Brezza's interior is headlined by the SmartPlay infotainment system that also does duties in other Maruti cars. This apart, even the Brezza seats you high and has a slimmer A-pillar that doesn't restrict your vision during turns. The Brezza also has good leg room as well as head room for all the occupants. The boot capacity is 328 litres, the least in this class. Twin airbags as well as ABS are optional right from the base trim.

A near similar layout with the existing Tatas, exception being the 6.5-inch touchscreen infotainment system, means you're in familiar space with the Nexon. While Tata does boast a 209mm ground clearance, you don't really sit high up in the Nexon. This aside, the Nexon gets a few useful cubby holes. While space inside looks better than that of the EcoSport, we will have to wait for an actual comparo to find this out

Maruti offers the Brezza with a lone 90PS/200Nm 4-cylinder 1.3-litre diesel engine and a 5-speed manual gearbox. This engine is shared with the other Marutis and suffers from a bot of turbolag in the lower gears. It however revs a bit for a diesel and once on the boil, is a quick performer too.

The EcoSport comes with a choice of three engines and two transmissions. The diesel is a newly updated 100PS motor that is mated exclusively to a 5-speed manual. The Ford engine too suffers from turbolag at the bottom end of the rev range and needs a bit of revving around to make progress.

The Nexon's all-new 1.5-litre diesel motor is good for 110PS/260Nm and is mated to a 6-speed manual transmission. The engine has lots of torque at the bottom-end and makes do with lesser gear changes. The Nexon can also be ordered with a new 1.2-litre 110PS petrol engine as well. 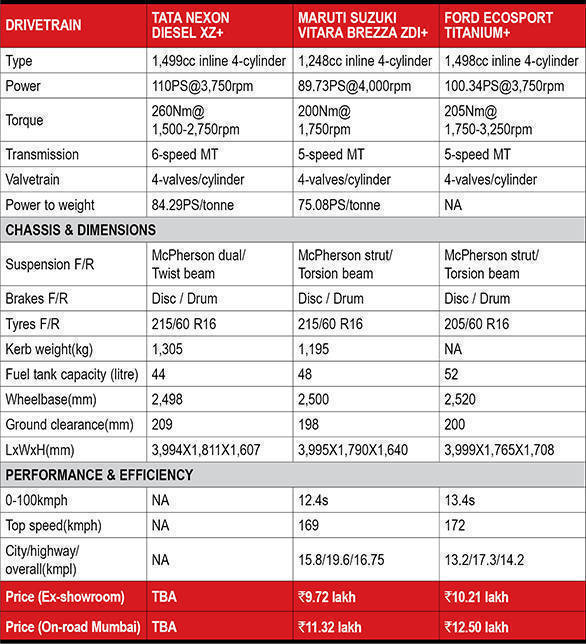