Most parts of India have recently been in the grips of a severe heatwave with temperatures crossing record levels. To escape the searing heat, my wife and I decided head to the hills.

We first flew to Coimbatore, the textile city. It's also a very important hub for Indian motor racing with many talented drivers, prominent tuners, and race and rally car builders being based here. The good folks at Hyundai kindly provided a diesel Elite i20 which we collected at the airport. Then we drove into town to stock up on supplies. After just some brief interactions with a couple of shopkeepers, my wife said, "The people are so polite and helpful here." It's true - most people in South India tend to be more polite than other parts of our country. For a detailed image gallery, click here. 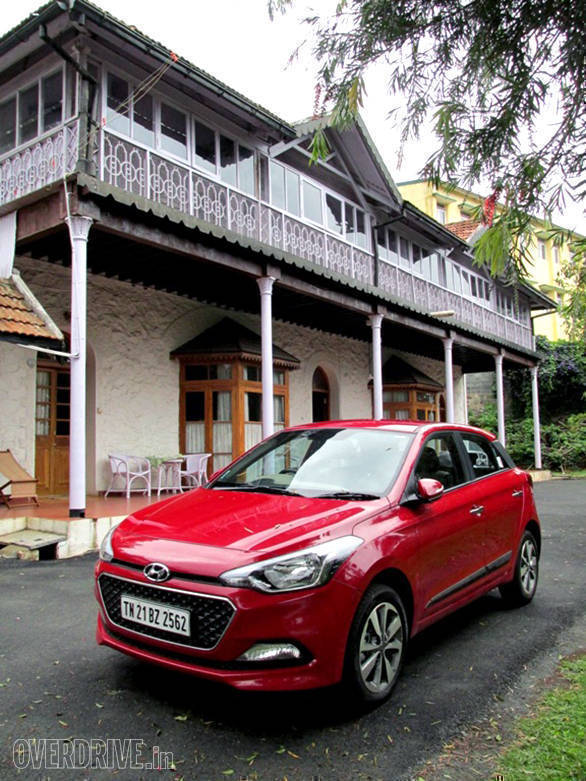 Our wheels outside our cottage at the Ootacamund Club

We first drove to Mettupalayam at the base of the Nilgiri Mountains. As it was Sunday, traffic was light. From Mettupalayam we started climbing and the volume of traffic also increased. A lot of tourists were heading into the hills, and the narrow road was packed with vans and buses. The first big town we crossed was Coonoor, the sister hill station of Ooty. It too was crowded with tourists and the going was slow. Coonoor onwards we encountered bumper-to-bumper traffic and the progress was painfully slow. En route to Ooty, we passed Wellington, the headquarters of the Indian Defense Services Staff College and also the base of the Madras Regiment, which is more than 250 years old and the oldest regiment of the Indian Army.

Coimbatore to Ooty is just 90 kms, but it took us about four hours to get there due to the traffic. Also referred to as the queen of hill stations, Ooty (now Udhagamandalam) is situated at a height of 7,400 feet. Ooty was developed by the British as a summer retreat in the 19th century. It is famous for its colonial architecture, churches, rolling hills covered with pine and eucalyptus, botanical gardens with over 650 different species of plants, and its tea plantations. The verdant hillsides are decorated with tea gardens and some of the Nilgiri tea grown here rivals that of Darjeeling.

Over the years, Ooty's popularity has grown and it is now the most popular hill station in South India. Sadly in recent times, Ooty has seen haphazard development and it's also got quite commercialized. Despite this, it's a good place to get away from the heat and dust of the plains. While we were there, the temperature was in the range of 10 to 20 degrees C. Thanda Thanda, Cool Cool.

Interestingly, Ooty still retains many social norms associated with the British Raj. The Ootacamund Club is very exclusive and well preserved. The building was erected in 1830 and Colonel Sir Neville Chamberlain invented the game of snooker here in 1875. The Ooty Hunt began in 1829 with hounds chasing jackals and foxes. The Ooty Hunt Club was founded in 1907, and trophies of these animals and photographs of the famous hunts still adorn the walls of the club. Of course hunting is banned now but old-timers still recount tales of these hunts. We were fortunate to get a lovely cottage at the Ootacamund Club and had a truly splendid stay. In the evenings, men have to wear a jacket and tie to enter the main building and the club has both a 'Mixed Bar' and a 'Men's Bar'. 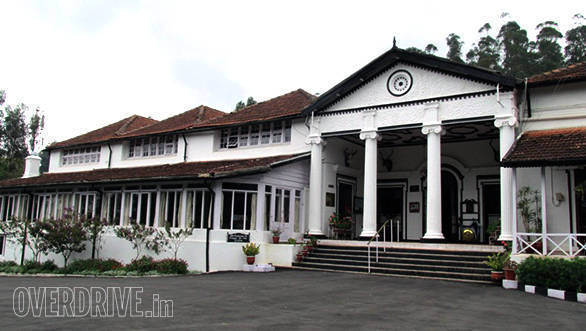 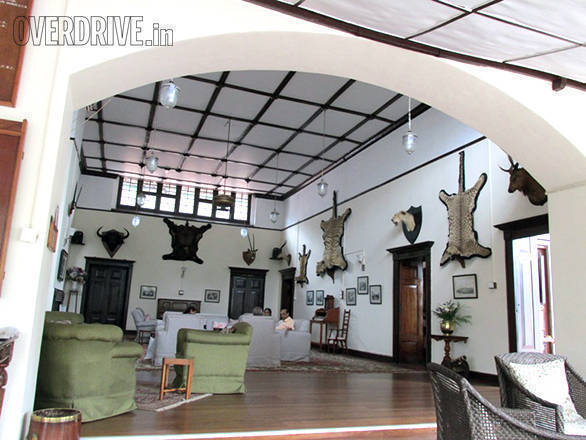 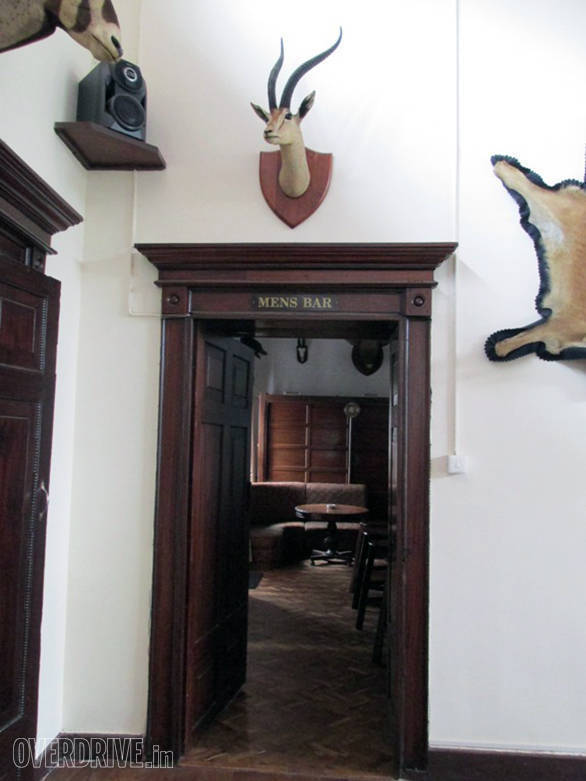 One afternoon, we went for lunch to the Taj Savoy Hotel. Built in the period from 1834-65, the quaint cottage-like setting of the hotel exudes a colonial charm that is reminiscent of the British Raj. It is an ideal retreat to unwind as the hotel offers an atmosphere of calm and serenity. The hotel offers a regional home-style dining experience, and while my wife opted for a South Indian meal which was scrumptious, I went in for dak bungalow murgi roast, made and served in period style. It was too yummy and enchanting. The icing on the cake was, of course, the delectable mango soufflé. In fact, my mouth is watering as I write this, and I could go to Ooty just to eat at the Savoy. 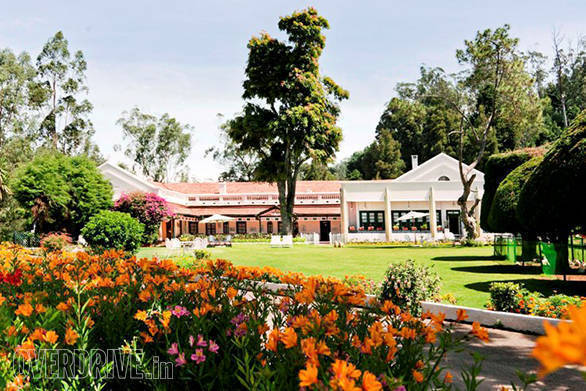 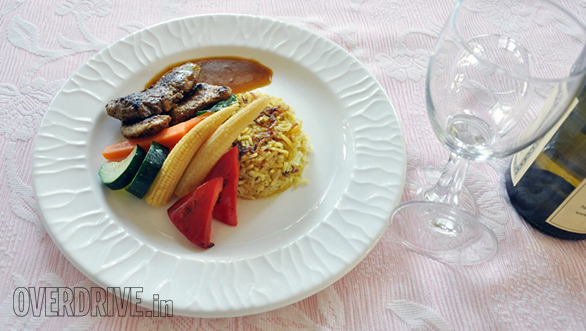 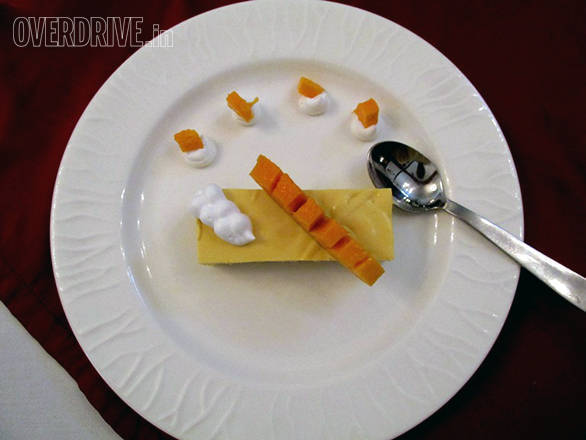 During our week-long stay in Ooty, we also visited the Ferrnhills Royale Palace Heritage Hotel and had a super meal of South Indian fish curry with steamed rice and chicken stroganoff. The Ferrnhills Royale Palace is the 'summer palace' of the Mysore maharajas. It was built in 1844 by Capt. F. Cotton, and even today the main palace is surrounded by thick forests and the rooms exude old world charm and pamper you like royalty. 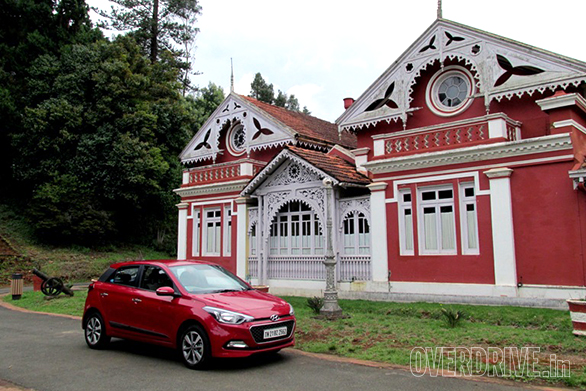 After a wonderful 'holiday in the hills', we decided to retreat into the arms of nature and drove to the Bandipur National Tiger Reserve. Accompanying us were Brigadier Mohan Barathan and his wife, Lata, both of who we became friendly with at the Ootacamund Club. We descended via the Sigur Ghat that ranks amongst the steepest roads in India. We came down some 3,250 feet in just 17 km after negotiating 36 hairpin bends! As the road is also very narrow, the driver or rider as the case maybe needs to be very careful. At the hairpin bends, you need to keep a sharp lookout for vans or buses coming uphill. As they have a big turning circle, they exit the hairpin bends on the wrong side. So you need to stop well short of the turn or go onto the inside of the bend. While you have to be very alert behind the wheel, there are breathtaking views which make the drive even more enjoyable. The nimble and compact Hyundai i20 Elite was in its element on this ghat road. Though the steep descent put a lot of load on the brakes, they coped very well and I detected minimal brake fade. Please note that the road from Ooty to Bandipur is closed from 9.00 p.m. to 6.00 a.m. to prevent disturbance to wildlife. 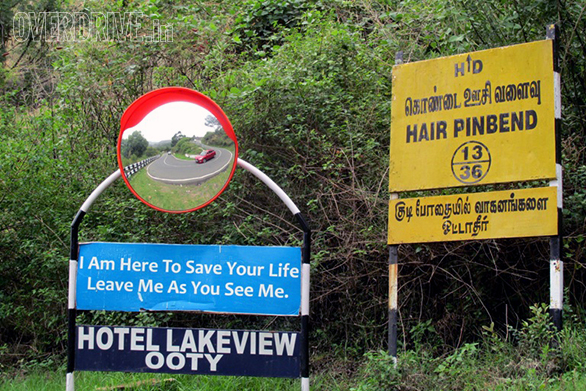 Curved mirrors on the Sigur Ghat show oncoming traffic. It has 36 hairpin bends 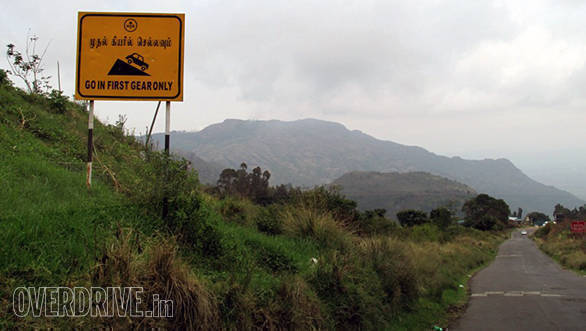 On the extremely steep Sigur Ghat, its best to descend in low gear

After a most enjoyable two-hour drive, we reached Bandipur Tiger Reserve which is also part of the Nilgiri Biosphere Reserve. There is plenty of wildlife with large herds of wild elephants being the main attraction. This forest is also home to gaur (Indian bison), deer, sloth bear, marsh crocodile, python, Indian giant squirrel, flying lizard, etc. Besides the mighty tiger and cunning leopard, the other major predator here is the dhole or wild dog. 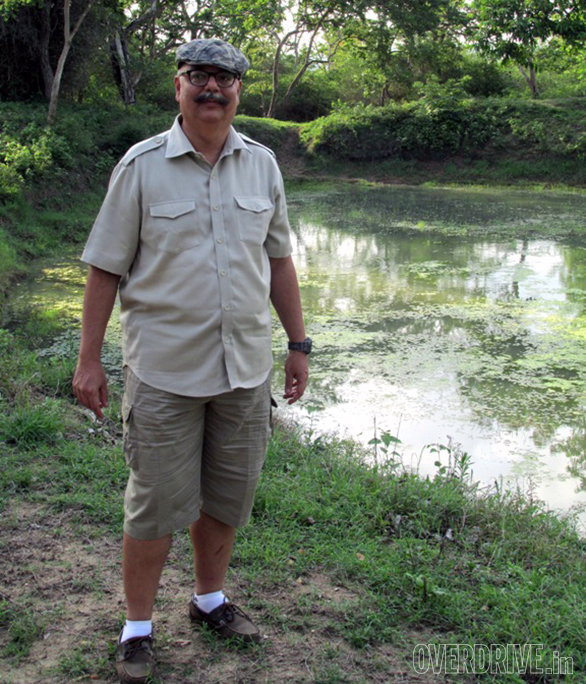 Bob at a waterhole in Bandipur

Till a decade or so back, the notorious bandit and poacher Veerappan also operated in this area. Fortunately after his death at the hands of Special Forces in 2004, his shadow no longer hangs over Bandipur, and one can come here and enjoy the diverse yet decreasing wildlife of India. We stayed at the Windflower Resort owned by Kanwar Gajendra Singh and his wife, Vishalakshi Devi, who belongs to the royal family of Mysore, ancestral owners of the entire park. At present it's run by the Windflower Group and has luxurious cottages and a fine restaurant that lays out a nice spread of tasty food. Late in the evenings, you also have wildlife entering the resort campus and we saw many cheetal (spotted deer) and some wild boar. Another nice place to stay is the built-in contemporary style resort run by the Jungle Lodges Group eco-tourism experts. 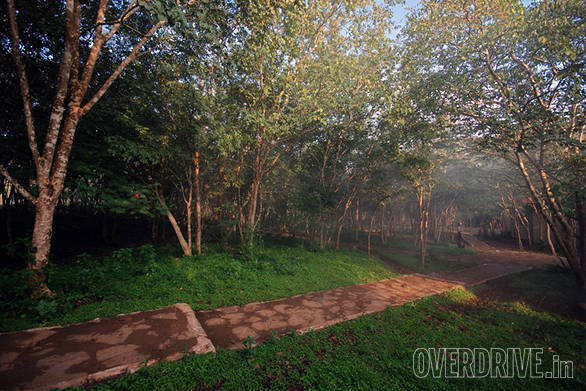 On our first jungle safari into the Bandipur Tiger Reserve, we sighted large herds of cheetal, some sambar, gaur (bison) a mongoose, a huge serpent eagle, monitor lizard, elephant and green bee eaters having a mud bath. But nature reserved the best towards the end of the safari. We came across a safari vehicle waiting near some bushes. They said they had seen a leopard in the bush and were waiting for it to come out. We decided to wait with them. Soon after, a solitary wild dog or dhole came by. This flushed out the leopard. He jumped out of the bush and keenly watched his rival predator. The presence of two predators alarmed the cheetal and they all took off with their tails raised, signaling they were alarmed. Once the wild dog left the vicinity, so did the leopard. 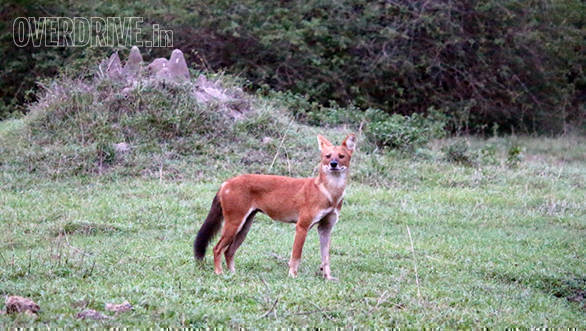 Wild dog or dhole, one of the most feared predators 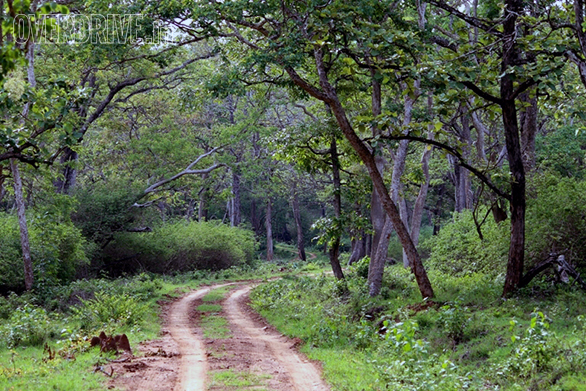 Excited by this sighting, we went on another safari the next day. This time Kanwar Gajendra Singh (better known as Nanu) accompanied us. Nanu is a wildlife expert who is writing a book on the orphaned leopard cubs he and his wife successfully introduced into the Bandipur Tiger Reserve. All through the safari, Nanu regaled us with fascinating anecdotes and information about the forest. Though we did not see much, we were having a jolly good time. 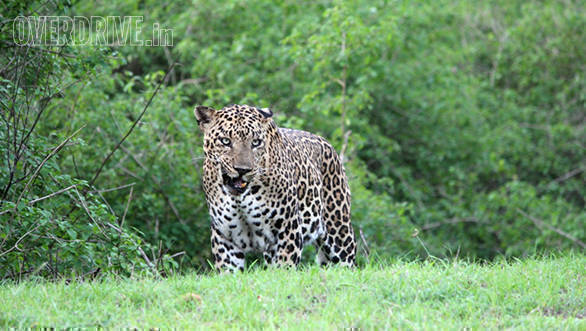 When we first sighted Mr Spots, he locked eyes with us

And then the most incredible thing happened. From the last row in the safari vehicle, I spotted some wild boar in the distance and asked the driver to stop. Suddenly I sensed something and looked to my left. A full-grown male leopard was standing less than 12 feet from us. Soon everyone noticed him and there was a deafening silence. Then Mr Spots stepped out and started walking ahead of our vehicle. Occasionally, he stopped to spray mark his territory, and at times he looked back and glared at us. He walked ahead of our vehicle for a full 10 minutes before turning into the thickets again. What a sighting - it unveiled to us in the forests of Bandipur a beauty that is sublime, solemn and spellbinding. 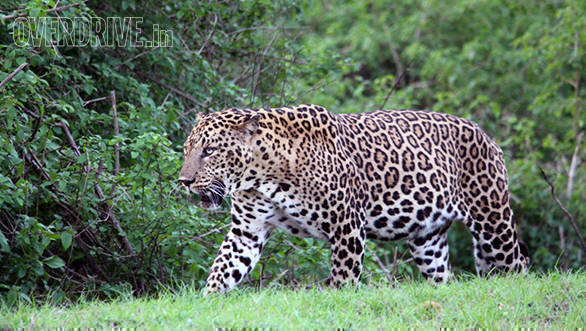 The full-grown male leopard we were lucky to sight 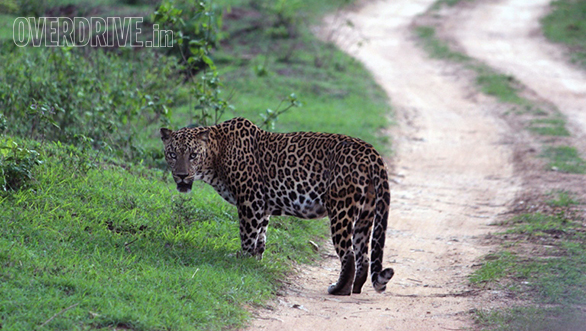 He often turned round to glare at us 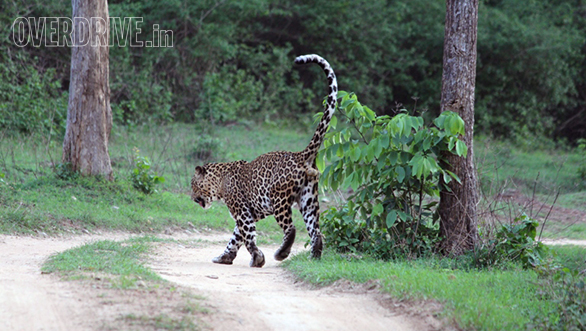 He often stopped to spray mark his territory

The next day we were very sad to leave, but all good things have to end, so we drove back to Coimbatore to take our return flight. But we made sure we went via the Sathyamangalam Tiger Reserve route which was beautiful and the perfect way to end this driving holiday. 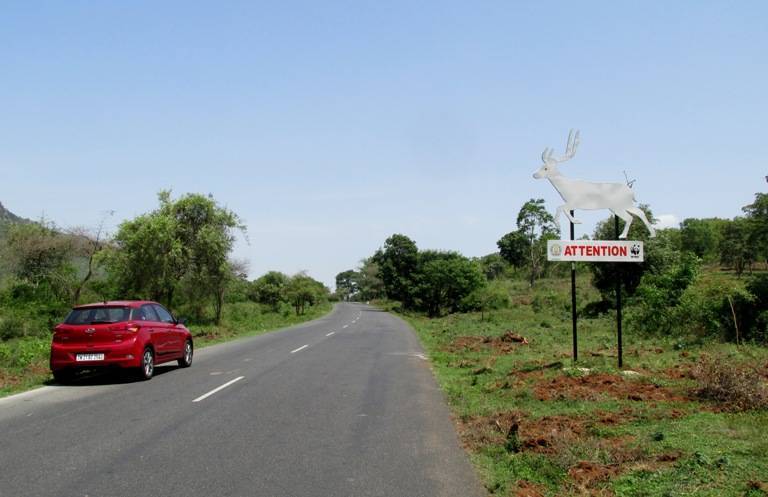 Sign to look out for deer, Sathyamangalam Tiger Reserve