Turbocharging has become almost synonymous with more power. But is it? Let us find out.

In a normal engine - aka the naturally aspirated engine - the inlet valve opens and the air required for combustion gets sucked in as the piston moves down on its suction stroke. For this, the engine has to do some work which doesn't directly drive the wheels, in effect, energy is wasted. Further, the volume of the air sucked in is never equal to the stroke volume because of the elasticity of the air molecules and inefficient suction. As in the cylinder never gets as much air as it possibly could which further leads to improper combustion and thus, less torque.

But if we could help pack the air in, almost all of these issues disappear. This is similar to blowing air into a Frooti packet before stomping on it for a loud bang. The more air you can pack in, the bigger the bang you can achieve.

While you use your mouth to fill the Frooti packet, filling an engine takes a bit more work. The turbocharger consists of a turbine (sort of like a complex fan) that drives the compressor through a shaft. This arrangement is similar in nature to a turbo-jet engine in an aircraft. 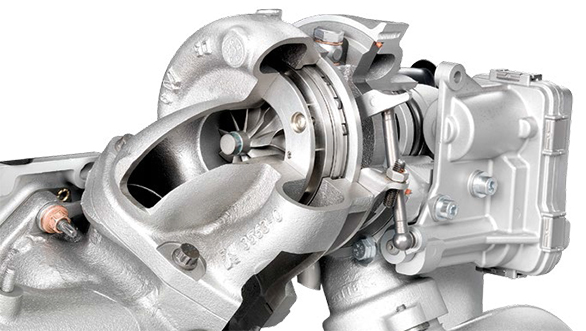 The turbine is driven by the pressure of the exhaust gases as they leave the engine. And its rotational motion is transferred to the compressor via the shaft. The compressor as it rotates, takes fresh air at atmospheric pressure and pumps it actively into the cylinder via the inlet valves. Because there is always positive pressure, no energy is wasted sucking in air and more air is fed into the cylinder. More air means we can use more fuel to make bigger bangs and hence, more torque.

In a happy coincidence, this happens to improve fuel efficiency as well because the extra air also aids more complete combustion - we extract more juice from each droplet of fuel.

But since the turbine draws power from exhaust gases, when the engine has just started or is idling, there isn't enough power to actively compress the incoming air. On most cars, turbos only make their presence felt by 1500-2000rpm onwards, once the exhaust gas pressure has reached a certain threshold. The difference is torque below and above this threshold rpm range can be dramatic and that is why cars that display this difference are said to have turbo lag.

Manufacturers already have three solutions to the turbo lag issue. First is the variable geometry turbo. Think of it as a turbine fan where the blade angle (also known as pitch) can change so that you can drive the compressor by altering the pitch and lower the rpm point where the turbo kicks in.

Then there are twin-turbos and twin-scroll turbos. A twin turbo literally uses two turbochargers either in parallel or in series. In the former, the two turbines are fed simultaneously by an equal number of exhaust pipes. In a series arrangement, a smaller turbo kicks in (aka spools up) early to cut turbo lag before handing over to a larger turbo that is tuned for higher rpm operation. In use, this can be a seamless experience.

The twin-scroll system uses two exhaust inlets on the same turbine. One is angled so that it operates well at lower rpm while the other inlet is angled for optimum operation at higher revs. In effect, this is the same solution as a variable geometry turbo but instead of altering fan blade angles, you change the angle at which the exhaust gases arrive on the blades.

Turbochargers are not only great at boosting power as well as economy but they also cut emissions which is why they are proving to be extremely popular as a way to meet and beat ever-tightening emissions requirements. Turbochargers aren't just synonymous with more power, they will soon become a powerful tool to make cars greener as well.