We've already discussed what suspension is. Now let's talk about its deployment in cars today. Typically, four wheelers have two sets of wheels placed opposite to each other, longitudinally along the chassis, the axle to axle gap between them being the wheelbase of the vehicle. This is convenient in terms of engineering and producing steering systems (for the front wheels) and propulsion systems (front, rear or all-wheel drive). But this arrangement also allows the manufacturer to decide how to connect the two wheels of each set in terms of suspension as well. 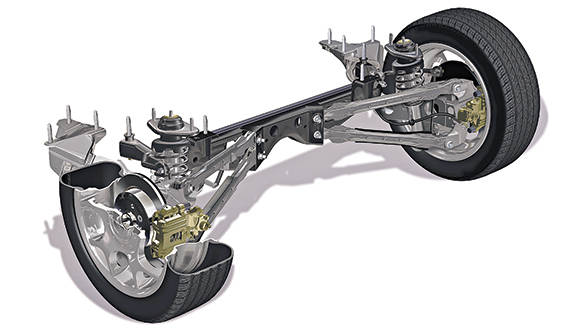 The simple, cheap way is to mount the wheels on a common a.k.a rigid axle with each wheel getting its own suspension, whether spring or leaf spring, to connect to the chassis. This is a strong and simple system. But it also means that when one wheel moves vertically to absorb a bump, the rigid axle also transfers some of this movement to the other wheel. This setup is still used in heavy-duty or low cost applications today and is called the dependent suspension setup.
But the next step, and this is a big step, is to disconnect the wheels from each other, whether one of the two sets or both sets and create independent suspension. A car with independent front suspension, in effect, has the ability to allow its front wheels to move vertically without affecting each other. A fully independent suspension implies that all four wheels can do this.

Dependent systems typically trade in ride quality and handling for reliability and cost. But independent systems allow far greater control over the chassis attitude and its ability to handle well, ride well or both. Typically, independent suspension is more expensive and therefore, usually observed in bigger cars.

The idea of control over the suspension brings the idea of setup. Engineers have to design the balance between handling and ride quality in light of the role of the vehicle. For instance, a Porsche sportscar must allow for better handling more than luxurious, plush comfort. But a Rolls-Royce needs to do the opposite. During the design and testing phases of a car, manufacturers spend thousands of hours on simulators and with actual prototypes to fine tune the spring rates and dampers to achieve the best possible and role-accurate suspension profile in terms of stiffness, control and its ability to absorb bumps.

But what if you could simply change the spring rates and damper settings as you went along the road. So that on a straight highway, you could have the ride of the Rolls-Royce and at corners, the handling of the Porsche? While relatively recent, there has been technology that solves part of this issue. Many cars today offer semi-active or adaptive suspension systems today. While these systems cannot alter their spring rates, the dampers use a variety of mechanisms to be able to offer a range of compression and rebound damping settings. Using magnetically active fluids whose viscosity can be altered via electromagnets is a popular solution. These systems can control ride height, body roll and suspension stiffness to a great extent and offer an 'active' mode where super fast sensors allow the suspension control unit to alter the damping response within milliseconds as a bump begins to cause the springs to move. There are also presets like 'sport' and 'comfort' where the driver can choose the dynamic feel of the car depending on what he is currently driving for - to work or up a mountain road.

The ultimate goal is a fully active suspension where both the spring rates and damping is variable and controllable. An active suspension system needs to be able to monitor the road conditions (via camera, radar, GPS etc) to be able to tailor the body roll, wheel movement, lateral acceleration to achieve the designed feel of the car. As in, soften the suspension to absorb a pothole and then instantly stiffen it as the road begins to curve sharply. Mercedes-Benz already has such a camera based system as an option called Magic Body Control on the new S-Class.

Lotus used active suspension in F1 in the early eighties. With the help of powerful sensors and actuators on each wheel, the active suspension's computer decided when, which way, how far and how fast to move and at how many times per second. The actuators themselves are mostly hydraulic where the oil/air accumulators and the valves control the orientation of wheels without the need of actual spring, dampers or anti-roll bars. However, there are still no production cars with a fully active suspension setup today.

Mechanism of a flywheel explained 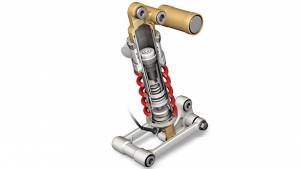