Imagine a car or a motorcycle floating so that all the tyres are about an inch off the ground. What do you think will happen when you try to steer, brake or accelerate? That's right, nothing will happen. All of these three things can take effect only via the tyres and for this the tyres have to be in contact with the ground.

Now, if you observe the wheels of a car in motion, you'll notice that apart from the rolling motion, the wheel also moves up and down in response to the undulations of the road. If the wheels were directly bolted to the chassis without suspension, the wheel would try to follow the undulation and then become airborne as the inertia carried it up into the air. The loss of the contact between tyre and road would make it undriveable. Inside the car, the passengers will be subjected to relentless juddering. All of these dangerous things are handled by suspension. But make no mistake, the primary job of suspension is to keep the tyres in contact with the road by allowing the tyre a range of vertical movements to be able to follow the contours of the road and thus keeping the driver in control of the vehicle.

On the undulations, adding suspension will allow the wheel to climb up an undulation and then the spring pressure will force the wheel to follow the downward slope as well instead of becoming airborne. It will also isolate this up and down motion from the chassis, keeping the occupants comfortable.

Typically, suspension has two major components  the spring and the damper. Springs take various forms, but the most recognisable and popular form is the coil spring. The leaf spring is used mostly in heavier duty applications today. Another form that is quite popular in small hatchbacks today is the torsion bar where the twisting action on the steel bar creates the spring effect.

But if you compress or stretch a spring and release it, you'll notice that it oscillates until all of the energy used to stretch or compress it is dissipated. In a car, a spring alone will make the car bounce up and down long after a bump has disturbed the spring. That's why the second component is called a damper or a shock absorber. The damper absorbs the compression energy as well as the rebound energy (spring expanding) created by the vertical movement of the wheel. This, in effect, prevents the oscillation without interrupting the actual compression or extension of the spring in response to a bump. Almost in every case, a damper has a telescopic tube with a piston and oil inside. The oil resists the piston's movement because a small hole or holes in the piston allow a small and controlled quantity of oil to pass through, absorbing the pressure. When the oil is replaced with gas, you get a gas-charged damper. 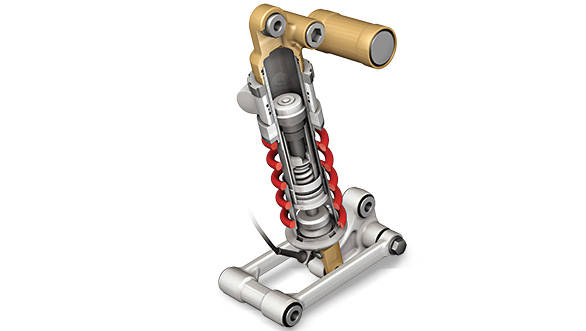 As you can imagine, suspension has a major role in the ride and handling of a vehicle. Soft suspension (as in weak springs) will compress and absorb all the worst of the road but will allow the chassis to roll and sway when it changes direction and sideways forces occur. Similarly, under braking and acceleration, there will be dramatic chassis pitching (as in dive under braking and squatting under acceleration). Which means it will handle poorly. A stiffly sprung car (hard springs) will produce a car that manages changes of direction and speed rather well, but will tend not to absorb bumps all that well, creating an uncomfortable vehicle overall. The setting of the dampers is equally important and produces a similar effect.

In cars, where there are two sets of suspension mounted parallel to each other, body movement can be controlled by the addition of an anti-roll bar which joins the two suspension units transferring some of the wheel movement to the other side of the car creating less body roll.

Suspension is very complicated but this covers the essence of how it works and how it is constructed. We will talk about the more advanced aspects of suspension in the next edition of Simple Tech. 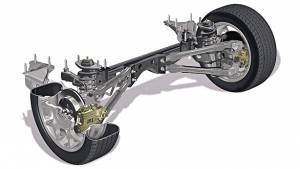