We all zero in on the peak power and torque  when we look at cars and motorcycles. But what are they and how do they relate to each other. Let us find out.

Power is defined as the rate of doing work, measured in brake horsepower. OVERDRIVE uses a more universally accepted unit, Pferdestärke or PS but the concept of brake horsepower is critical to understanding power so we will come back to it. Power is the rate of doing work. In engines, this work done is the torque applied, measured in Newton metres or Nm. Power, therefore, is rate of applying torque. Which is why power is measured (on dynamometers) by applying a brake to the spinning wheels and measuring the resistance  power is a derived measurement, it is derived from the torque and the rate at which the engine is spinning, rpm. Torque, on the other hand, is actually measurable. In fact, torque is primarily what a dynamometer actually measures. 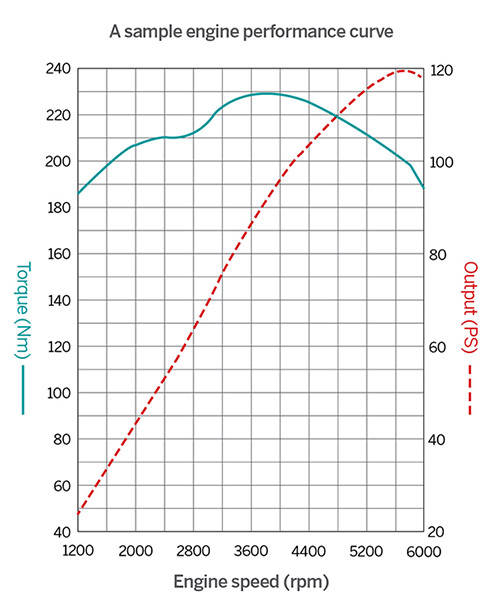 Power and torque curves represent the character of the engine

Torque, simply put, is turning force. Think of the crankshaft or the wheels as the elements actually turning  which is why manufacturers quote torque at the crank or occasionally, at the driven wheels. Since power is derived from torque and rpm, the way to make more power, is to apply torque faster, or in the other words, increase the rpm. This is why engines make their peak power later in the rpm range than their peak torque. Torque itself is easier to make as you make the engine itself larger, which is why larger displacements are usually employed to create more powerful engines.

The figures you see on the spec sheet then, are the peak torque and power measurements for the vehicle. It defines the maximum torque and power (in Nm and PS, respectively) and tells you what part of the rev band these figures were measured in. The part of the rev band mentioned is a critical element of the character of the engine. Engines that produce their peak torque early do well when it comes to pulling heavy loads, they feature in SUVs, big cars, heavy cruiser motorcycles and most commercial vehicles. These vehicles need to be able to generate speed quickly and/or carry heavy loads but don't need to travel at high velocities to fulfil their roles. Typically, these engines don't make exceptional power without the application of significant engine technology.

Vehicles that need to operate at high speeds, on the other hand, prefer to produce lots of power at very high revs, often at the expense of torque at lower parts of the rev range. Examples include sportscars, supercars, high performance motorcycles and race cars. All of these vehicles trade in low down torque to be able to produce great high-rev performance.

What that also means is producing both great low-end torque and high-rev power requires a lot of technology, usually including variable valve timing, intake, cam timing arrangements and turbo- or supercharging  to effectively make one engine behave as two or more engines in effect. Without all this techno-wizardry, producing both exceptional low-end torque and high-end power is next to impossible.

The role of the engine also determines its engineering. Engines designed to make great torque can work with a longer stroke and heavier components because it needs to work at lower revs and heavy reciprocating masses and parts can contribute to the torque output. High revving engines require the components to move quickly and tend to use lighter parts, exotic materials and to quell the trade-offs in low-end torque, lots of technology.

Finally, there is the idea of power to weight and torque to weight ratios. As you can imagine a 600PS car weighing 6,000kg is not going to feel the same as a 600PS car weighing 600kg. Ditto for the peak torque. The ratio gives you a more accurate indication of the performance. For example The Supercharged Ariel Atom 2 has 300PS and 550kg, a power to weight ratio of 554PS/tonne and Pagani's Zonda F gets 602PS and 1230kg   497PS/tonne. The Ariel gets to 100kmph from a standing start in 3.3 seconds while the Zonda needs 3.6 seconds.