The internal combustion engine is science and technology working together for a great good. But it's also art. And there is little that is more arty than the manifolds. The manifold is a tube. It is bolted to the intake as well as exhaust side of the engine. And despite how simple it looks, what lies inside is pure art and magic. The channelling of the gases that enter and exit the combustion chamber is a precise design process. And it has a massive, massive impact on both efficiency and performance. 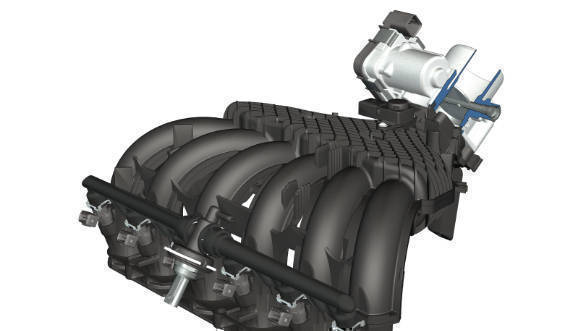 Intake manifolds used to be metal but are increasingly made of engineering plastics on modern engines. There were expected to just collect the air-fuel mixture (carburettors) or just air (fuel injection) and ensure supply to the cylinders just when they needed it. In a carburettor application, the carb injects fuel into a stream of high velocity air. The mixture enters the manifold which is a larger chamber and slows the air down which promotes better mixing of fuel and air. The inner walls of the manifold are rough to create turbulence for even better mixing. But it cannot be too turbulent so the roughness is tightly controlled.

The manifold connects to each cylinder via runners, or small diameter pipes that take the mixture right to the intake valve. The small diameter speeds the mixture back up again. The suction of the piston on the downward stroke always creates a slight vacuum inside the manifold which ensures air flow through the carb. But this also means some energy is lost in sucking air in - solved today by more advanced manifold design and of course, turbochargers.

But since a fuel injection system requires the manifold only to collect air and pass it on, why would they even need one? Manifolds do more than corral air today. It appears on the surface that the manifold and runners are just conveyors for the gases entering the cylinder. Enter a peculiar property of air called Helmholtz Resistance.

In simple terms, air at high velocity has inertia just like a solid object. So  air enters the cylinder at high speed through the open intake valve. But when the valve closes, air continues to flow towards the valve jacking up pressures in the runner. This 'lump' of air bounces back towards the low pressure in the manifold and this pressure pulse continues to oscillate between manifold and runner like a pendulum.
If the runner length is right, the 'lump' arrives exactly as the intake valve opens so that no sucking action is needed to fill the combustion chamber. That's free forced induction. A carefully design runner on a natural aspirated engine is a huge asset to torque output.
A turbocharger is an expensive way to do the same thing. Except that a turbo can deliver pressurised air at almost any rpm whereas a tuned runner must attack only a slim band of revs where the 'lumps' arrival matches the intake valve's timing. Runner tuning, then, produces an outsize result in competition rather than on the road.
But before turbochargers reached their current state today, the engineers had already created variable inlet tracts - or to be precise variable length intake manifolds. Essentially the engine was given a set of tuned runners that would make themselves useful at a bigger slice of the full rev range. How? Initially, longer runners had strategically placed valves inside to control the inlet distance. Logic? Low revs need a longer runner because air speed is lower and longer runners space the pressure pulses out. As the revs rise, the pressure pulses need to arrive quicker so you need a shorter runner length. The addition of variable valve timing to the variable manifold expands the range of rpm where these benefits can be felt.

Turbochargers didn't diminish the attention paid to manifold design. Now the manifold began to be a vessel that collected the high velocity air from the turbo's outlet and converted that air speed into pressure that filled the cylinders forcefully for bigger bangs on the combustion stroke.

Next month, we cross over to the other side of the engine and look at the exhaust manifold.