When we closed last month's discussion on drivetrain layouts, or how the engine's torque reaches the wheels, we introduced the idea of performance and on-demand four-wheel drive systems. Now we delve into them in detail. If you remember, we noted last issue that a hardcore off-roader, like a Mitsubishi Pajero, would have a transfer case which ideally sends equal power to both axles. This is terrific in difficult traction conditions, especially off-road. Soft roaders don't have transfer cases. They increasingly tend to be front-wheel drive, allowing the detection of low traction at a driven wheel to redistribute torque to the other axle. As in, the four-wheel drive is on demand rather than permanent. 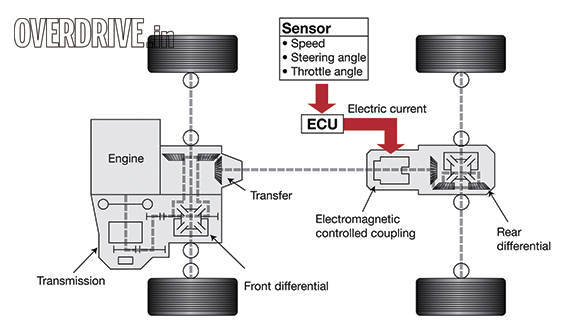 A common way to create an on-demand 4WD system is through a viscous coupling. The coupling device is essentially a sealed cylinder that has two output shafts (one to each axle) connected to two large plates inside the cylinder. The cylinder is full of a thick liquid that sometimes can be designed to become thicker (more viscous) under shear forces. Essentially what happens is that under normal conditions, both shafts rotate at the same speed and the front-wheels are driven and the rear wheels are rolling free. When a wheel slips, the difference in the speeds of the output shafts causes one plate to spin faster than the other. The liquid starts to thicken under the shear force and that in turn transfers more and more torque to the idling output shaft as a result. So as a front wheel spins up, it causes a change of the liquid viscosity in the coupling that in turn drives the rear axle. Advantages? Since the 4WD is on-demand, these turn out to be pretty economical. Example? The Mahindra XUV500 uses a viscous coupling.
When it comes to performance cars though, four-wheel drive systems are getting increasingly popular as well. This is because as you raise the power output of a vehicle, you challenge its ability to find traction. In that sense, the problem of thick mud is the same as the difficulty of putting a gazillion horsepower to good use. However, when it comes to fast sportscars, the challenge really is to make their extraordinary power produce useable acceleration and not interfere with directional control. We know 4WD systems are good at this. However, a 50:50 split 4WD sportscar isn't ideal. Sending proportionately more power to the rear wheels is far more effective at producing thrilling experiences.
Sending more power to the rear wheel is the job of a rear-biased four-wheel drive system. Let's assume that the manufacturer is using a fixed arrangement for simplicity, and it sends 70 per cent of the torque to the rear axle and the rest to the front. What happens is that in a corner, the front-end is working hard and pulling the car, not just steering it. This can be enough to overcome a car's tendency to understeer (drift wide out of the corner) or oversteer (the tail drifts wide and tries to overtake the front).
What is actually more likely is that the car employs a viscous coupling or an e-diff (electronically controlled clutches) to actively distribute the power to create the maximum result - whether acceleration or directional control - for a given amount of engine torque in every situation. The car will be able to read the steering angle, throttle position, roll (lateral rotation), pitch (longitudinal rotation) and yaw (rotation around the vertical axis). This gives the car's computer the information it needs to control the power spread (and sometimes the brakes on each wheel as well) to maximise performance. The efficiency and tuneability of electronic systems means e-diffs are growing more common and already appear in most of the expensive cars like the Lamborghini Huracan, many Bentleys and high-end Audis, BMWs etc.
The next step up in performance comes when these systems start talking to traction control and stability programmes. This allows the on-board computer to control power sent to each individual wheel or the brakes on it. This is called torque vectoring. In essence, a car that can vector torque can understand the intended trajectory of the driver and then apportion torque and braking to each wheel to produce that result despite having too much power or imperfect traction. For example, if a car were to tend to oversteer in a fast corner, the computer might cut power to or brake the inner wheels while increasing torque to the outer wheels to reign in the outward movement.