Earlier, we discussed the details of how braking systems are constructed and deployed in today's cars and motorcycles. Now let's delve deeper.

The basic problem with all braking systems is that if you use too much force, the deceleration can entirely stop a wheel from rotating before the vehicle itself stops moving. This is a big problem. You see, a rotating wheel can be controlled to produce an effective and predictable change in direction. If we can brake with a guarantee that the wheel will stop rotating only when the vehicle stops then we can endow vehicles with the ability to stop very fast, and be able to change the direction of travel to avoid a hazard. On motorcycles, of course, the rotation of the wheels is a vital source of stability and locking up makes the bike critically unstable. You might survive a locked rear wheel, but a locked front wheel even for a moment, will usually lead to a crash.

Aircrafts also have this problem. When they land from high speeds, they put a lot of stress on the tyres. But what happens next is that the aircraft slows down rapidly to a speed at which it can safely make the turns it needs to get to a parking spot. In difficult weather, locked wheels in the undercarriage are not what you want to deal with when you have 300 passengers on board.

This is the problem that anti-lock braking systems, or ABS systems were invented to solve. Usually deployed on hydraulic braking systems, ABS does a simple job. It monitors and can alter the force in the brake lines as well as the rotational speed of the wheels. When a wheel approaches a complete stop while the vehicle is moving, it limits or reduces brake force to prevent lock up. It then begins to increase brake pressure until the wheel begins to stop again at which point, it cuts back brake force once again. The system can do this many, many times per second to ensure that no matter what the traction situation or how much your force on the brake pedal or lever is, the wheel is using all of the grip it has to stop the vehicle, but never actually locking up. 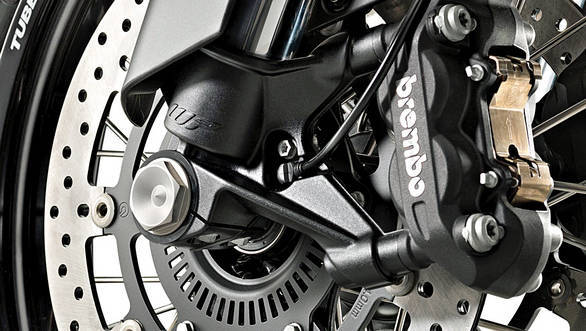 Grooves in the disc help the ECU detect wheel speed

ABS is now common in cars and is becoming an increasingly visible feature on bikes as well. Indeed, Europe for instance makes ABS mandatory in all vehicles. In these hydraulic systems, ABS adds an electronic control unit that is linked to the vehicle and wheel speed sensors so it can get the data it needs to make brake force decisions. On the main hydraulic circuit, the ABS adds a looped overflow circuit with a valve that is controlled by this ABS ECU. What happens when a wheel approaches lock up is that the ECU opens the overflow circuit so that the hydraulic fluid suddenly spreads over a larger area, reducing the effective pressure that the brake pads are putting on the brake disc. This means the wheels' rotation will get faster (technically it slows down more slowly). Once the ECU decides that lock up has been prevented, it starts to close the overflow circuit off which leads to a rapid increase in brake pad pressure on the brake disc. But again, just before the wheel can lock, the ECU reopens the overflow circuit. So the wheel is always at maximum deceleration but always prevented from actually locking up.

New generation ABS systems basically increase the number of times per second this cycle occurs. And they refine the feel in the lever as well. Early ABS systems pulsed hard in response to the brake force changes which felt odd. New ones feel more normal and therefore more confident to use in the hands of novice riders and drivers. New ABS systems are also better at understanding which wheels individually have how much grip and being able to spread the brake force to achieve the hardest controlled stop possible.

This system usually is called Electronic Brake-force Distribution, or EBD. In all vehicles, but more spectacularly on motorcycles and scooters, braking causes a change in the position of the centre of gravity. Think inertia. This alters the distribution of the weight of the vehicle across its wheels. Normally, braking loads up the front wheel(s) while reducing the weight on the rear wheels. Which means as you brake, the front wheels become capable of harder and harder braking while the rear wheels can offer less and less braking ability. An EBD system, in conjunction with the ABS ECU, can understand this dynamic process and alter the pressure of every brake set it has under its control.

Now think of a car being driven in a lane where the left half of the lane is wet while the right half is dry. When you start braking here, there is a lateral difference in braking ability because the right wheels are enjoying a lot more grip than the left wheels. Again, ABS and EBD can control brake force so that all four wheels work as hard as possible individually to produce the fastest possible controllable stop.

But what happens if the grip on the left is so low that the car starts to slide despite the wheels still rotating? Well, traction control and stability systems are a whole different topic for another time. The biggest advantage of ABS, however, isn't all this technical gobbledygook. The big deal really is that ABS takes skill out of the picture in an emergency. When panicking, we humans rely on a combination of automatic responses generated by our fight or flight instincts. Without ABS, our reaction is to stomp on the brakes as hard as possible in reaction to a hazard. This causes locked wheels and then you slide out of control into the hazard in a cloud of tyre smoke. What ABS does is turn your natural reaction, the stomp on the pedal, into the hardest panic stop possible without asking you to bring any skills to the table. And when you turn the steering wheel to avoid the hazard, the car actually responds and turns away from the hazard under your control. It's like magic!