Aerodynamics is such a vast subject that it would take many, many Simple Techs to explain it fully. But in the simplest of terms, aero refers to air and dynamics, refers to its flow. Aerodynamics, then, is the science of how air flows, in our case, around objects in its path, like a car or a motorcycle. In this context, automotive engineers worry specifically about two interactions between air and our car/motorcycle, drag and downforce. 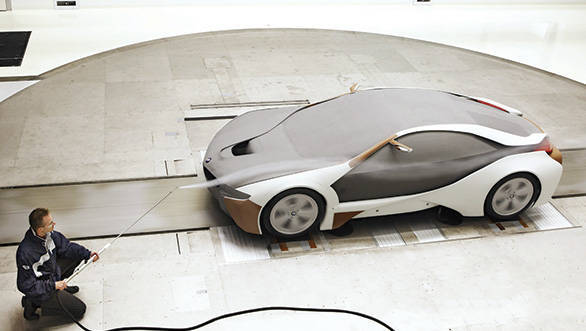 When a car starts moving, the movement causes friction between the surface of the car and air. This resists motion and is called skin friction and is one component of drag. Drag depends on many things but topping the list of the big contributors is the shape of the car, specifically its frontal area. The larger the area, the greater the drag  this component is called 'form drag'. That's why buses aren't very fast and aircraft are usually pointy at the front. The density and velocity of the air also play a role and there's a constant called drag coefficient which we will come back to. The point is, drag hinders motion. So when you are suffering drag, you have to burn more fuel to overcome it. It gets worse. Air has a unique tendency of acting like a liquid at very high velocities. This behaviour increases drag exponentially as speeds rise. It is the reason why very high speed driving consumes an inordinate amount of fuel.

Enter the study of aerodynamics. An aerodynamics engineer's job is to take a car design and find tweaks that allow drag to be reduced as far as possible. The general silhouette of all cars today, in fact, is a function of their need to be as drag free as possible.

The reduction of drag begins in a wind tunnel, which is a closed-off space with a large fan that the engineers can control to generate specific wind velocities around a real-size car or a to-scale model. What the wind tunnel helps measure is the drag coefficient, a number that engineers spend vast amounts of effort to reduce. In essence, the bigger the drag coefficient (written as Cd - coefficient of drag), the more resistance that vehicle will encounter.

Typically, a current day production car usually has a Cd between 0.30 and 0.35. The slickest cars like the Jaguar XE or a Mercedes B-Class can drop that to 0.26 and still more aerodynamically efficient are cars like the Toyota Prius and a few Mercedes-Benz cars that manage 0.25 or lower. But while you would think that making supercars slippery is why they spend so much time in the wind tunnel but they're in the hunt for downforce.

Downforce is the exact opposite of lift, which is what aircraft use to fly and stay up in the air. In effect, the wind tunnel time of a supercar is used to refine aerodynamic forms which cut drag and also create a downward force that pushes the car down harder on to its wheels as speeds rise. This downward push generates more grip that fast cars can use, for example, to go around a corner even faster.

One way to understand drag and downforce is that if you were to take a family sedan and drive it in a vacuum, it would report a higher top speed as well as better economy. A supercar in the same situation would do that as well but be unable to corner at speeds it would manage normally.

Wind tunnels, however, are very expensive. The cheap solution increasingly is to use computational fluid dynamics or CFD to predict (very accurately in most cases) how wind and a car's shape would interact. Next month, we'll dig deeper into downforce and what it has come to mean in the world of motor racing.