It has been five months since our last long term report on the Lodgy and in this duration, the MPV has clocked over 10,000km and gone through one scheduled service. The little niggles that Rishaad spoke of last time viz. squeaking plastics, humming sound from the passenger window and the rattling rear suspension, have all been addressed in the first service, but only the last one has been completely resolved. The rattle was caused by one of the linkages that had developed a minor play. As for the humming sound, it creeps in at speeds over 130kmph and seems to be a design flaw as three samples of the Lodgy, including ours, displayed the same problem. The squeaky plastics aren't a big deal as they make themselves audible only on extremely harsh road conditions. But hey, the car costs over a million bucks, so it shouldn't squeak and rattle like a hatchback, right? 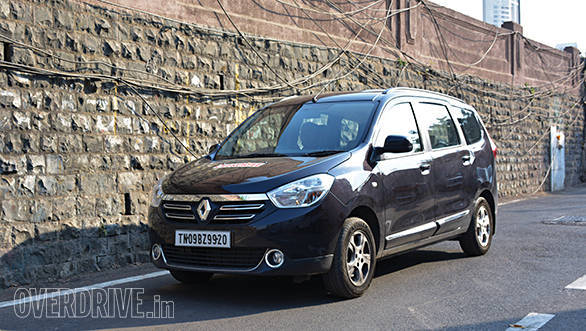 But the cost cutting in this large people carrier is evident  the wipers blades could have been better, the wing mirrors could have been larger and the speakers command very basic audio quality for a car at this price point. But ignore these little shortcomings and Lodgy impresses with its bulletproof nature. After all, it is a Duster underneath. It is also more car-like to drive making it easier to get used to and therefore everyone from us motorheads at OD to the 'civilians' in office have tried their hand at this MPV and returned impressed.

In fact, ever since I got the car, the third row seats have been lying in the office as the car has been borrowed by Rishaad for ferrying cargo from one town to another and by Halley for shifting furniture from his old house to the new one. Recently the Lodgy also went road tripping in Rajasthan filled to the brim with luggage. So in effect, the MPV has exchanged plenty of hands and carried kilos of cargo and still the only tantrum it has thrown are those squeaky plastics. Fair enough? I believe so.