The late Nazir Hoosein certainly knew how to tell a story. And tell it well. His ability to remember facts and figures, coupled with an easy eloquence, meant that every single motorsport anecdote that he narrated, came alive. All he needed was a little bit of a nudge in the right direction, and he'd paint you a moving motorsport picture that would play in your mind's eye. Instantly, you'd be transported to Sri Lanka, where you'd be trackside, watching Hoosein in the Double Barrels Team Alpha special battle it out with Sri Lankan driver David Pieris in the Ford Artico special, and win. Or you'd find yourself at Sholavaram, watching the Maharaja of Gondal in his Buick, racing against the DBTA Herald. Or, you'd feel a chill come over you, as you found yourself viewing the Himalayan Rally through the eyes of a lone marshal at a checkpoint along the route, waiting patiently to relay information to the next checkpoint, as each rally car went by. He had an uncanny ability to recreate motorsport memories simply and succinctly with his words. An ability that the anecdote-hungry motorsport enthusiast will now certainly miss. 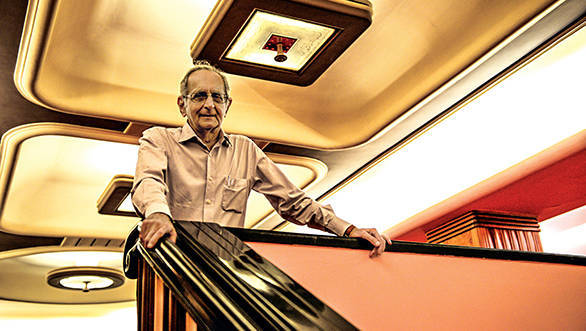 Nazir Hoosein at the Liberty Cinema in 2015

Hoosein's own tryst with automobiles began early. His father, Habib Hoosein, the owner of Mumbai's iconic art deco landmark, Liberty Cinema, was fond of cars. He maintained a garage that featured, amongst other things, a few Buicks, a Jaguar Mark 5, and a 1951 Jaguar XK120. And it was the XK120, that was presented to Hoosein for his 16th birthday, that triggered a passion for driving. He spent rather a lot of time taking the car all the way up to the Tansa Dam and back, discovering that he really enjoyed being behind the wheel. And when it became clear that he was going to spend his life surrounded by all things automotive, Hoosein began training under Adarbad Sethna, who owned the A1 Garage in Mumbai. Once done with his apprenticeship, he set up the Alpha Garage with his old schoolmate Mohinder 'Chubi' Lalwani. 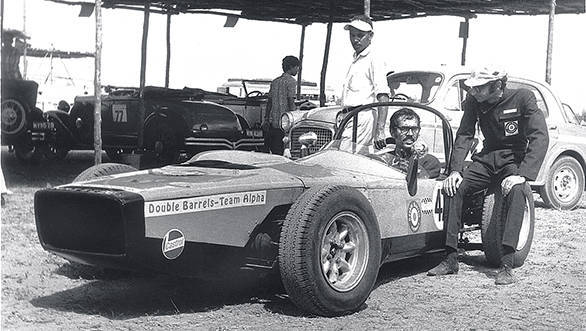 The racing followed soon after, with the Double Barrels Team Alpha outfit building 'specials' that were raced down at Sholavaram. Over the course of many years behind the wheel, Hoosein won a number of trophies. Perhaps the most significant victory came at the second Asian Highway Motor Rally in 1970, where Hoosein and Lalwani, drove a Triumph Herald 13/60, with the team's third member, Suresh Naik, servicing and repairing the car along the way. It was to be the first major win for an Indian team at an international motorsport event. 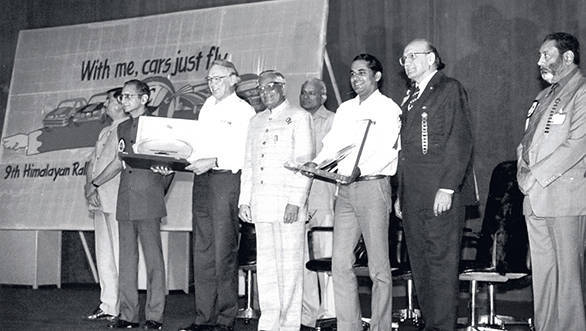 Hoosein, second from left, with President R Venkataraman at the prize giving ceremony for the 1988 edition of the Himalayan Rally (Photo courtesy: Himalayan Rally Association)

However, there's absolutely no denying the fact that it was the Himalayan Rally (organised by the Himalayan Rally Association he founded) that was the jewel in Hoosein's crown. The event, held between 1980 and 1990, was unlike anything that had been seen in India. And it was run at a scale that is unimaginable today. International drivers like Shekhar Mehta and Jayant Shah, from Kenya; D Hendricks, who competed in a works Lancia Delta; and rally legend Joginder Singh, all competed in it. It was also the event that launched many an Indian driver on the path to glory. Farad Bhathena was all of 18 years old when he took part in the 1982 edition of the event for Team Mahindra and won his class. Hari Singh made his rally debut for Team Thunderbolt at the 1989 edition of the event, ending sixth overall. Drivers like Vicky Chandhok, Nikhill Taneja, Captains Chauhan and Sekhon, and others from that era, all had adventures somewhere in the Himalayas thanks to Hoosein's vision of what international motorsport event ought to be like. "Many of us started our careers with the Himalayan Rally," Navaz Bhathena said to me a few years ago, "and nothing we've done so far can match that singular event." Hoosein, however, was a polarising figure, and his career wasn't entirely free of controversy. He is fondly remembered as a steward for the World Rally Championship events, despite the fact that he kept a little black book on his person, in which he listed out various offences committed by various competitors over the years. It was, as Martin Holmes explains in his column, a way of keeping track of offenders and doling out punishments based on their track record.

However, his role as a steward in Formula 1 has been a little less stellar. Hoosein came under fire for more than just a few questionable rulings in his time, the worst of which was handing Michael Schumacher a late penalty at the 1998 British Grand Prix. This allowed the German driver to come into the pits at the end of the race, serve his time there, and win the race in the pitlane. The ruling resulted in a temporary suspension of Hoosein (and his two co-stewards) from stewarding. 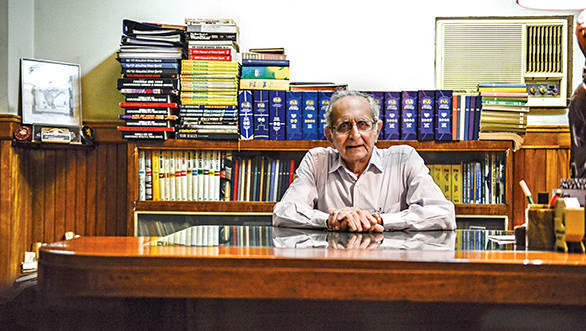 Then there was the fact that Hoosein, after being removed from the FMSCI (Federation of Motorsport Clubs of India), began the Motorsport Association of India (MAI) in an attempt to wrest power away from the FMSCI. However, since the government refused to acknowledge the MAI as the official ASN in the country, Hoosein's role within the sport gradually diminished. He did, however, represent China
at the World Motor Sport Council for a number of years. Over the past few years, due to ill health, he began devoting less time to motorsport and dedicated more time to the resurrection of the Liberty Cinema.

In fact, it was the Liberty Cinema complex that housed the Alpha Garage. And his office. An office that was a treasure trove of motorsport journals and books of every kind. Ones that he would pore over with a keen eye, committing all of what he read to memory, filing it away for future use. It was in the Liberty Cinema that Hoosein had regaled me with tales of the old Himalayan Rally (which enjoyed the patronage of the then Prime Minister Indira Gandhi and the then President R. Venkataraman), the Great Desert Himalayan Rally (a 4,000km long rally that ran all the way from the Thar Desert to the Himalayas that he organised between 1988 and 1989), and of motorsport back in the days when he used to race. With each passing visit to his office, the passage of time was evident on his face, and in his demeanour. However, what was also evident was that his passion for motorsport was in no way diminished. In our last conversation, three years ago, Hoosein summed up his involvement with motorsport simply saying, "It was an interesting time." An understatement, if there ever was one.