I did a lot of research into LED lights before me and money were parted, and I promise that I was not fooled. The idea of adding a set of auxiliary lights is always to supplement the OEM headlights that come with a vehicle. The Multistrada, on which the Denali D4s are mounted, fortunately, already have the best headlights we have tested on a motorcycle up to this point. So why would we need the D4s at all? I'll come back to it. The Denali D4 is a hybrid in the sense that the bottom two LEDs are floods (broad pattern, close- to mid-distance) and the top two LEDs are spot lights (narrow pattern, mid-distance to far). Note the scratches on the case in the photo, they're all the damage this light took when the motorcycle fell literally on to the light unit

Auxiliary lights tend to come in two major types - floods and spots. The flood is a light with a diffuse but wide light pattern. The spot, on the other hand, throws a narrow beam that covers a big distance but does not illuminate the area outside the narrow beam much.

Normally, you would select a flood if the need you felt was for a light that fills in the gaps in illumination over a wide area, relatively close to the motorcycle. Help for a weak low beam in simplistic terms. A spot or its even narrower beam cousin, the hyperspot would be employed when you needed a beam of light that projects far into the distance lighting obstacles that are still very far away. A very, very powerful high beam if you will. 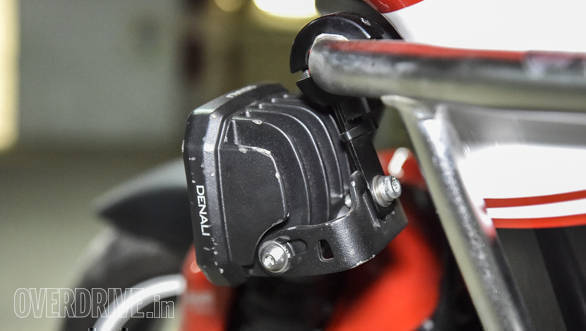 The back of the LED light unit has a substantial finned heat sink and at the very bottom, place to mount in the included C-shaped mounting bracket. The actual mounting unit holding the C to the frame, though has to be purchased separately

The Denali D4 comes with four LED lights, each set into its own reflector. The quartet are housed in a substantial waterproof casing with a heat sink on the back of it. The Denali D4 is called a hybrid light because two of the LEDs are floods and two are spots.

In the box are two lights and two C-shaped metal pieces that bolt on to the lights to allow mounting. A toggle switch and wiring is included. Unfortunately, you do have to purchase a mount separately which annoys me a lot, but does have some advantages too. 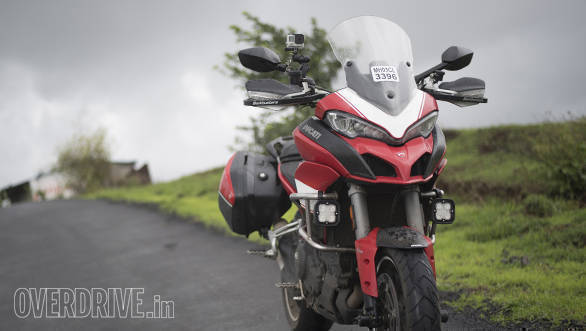 The Denali D4 light unit isn't a small one. Here they are mounted on a Ducati Multistrada for size reference

What I wanted from the Denalis was fairly specific. At low speeds and on bad terrain I wanted the mid- to far-away part of the road lit brightly. At higher speeds, I wanted the Denalis to light up the verge on the left at a distance and to add a little more oomph to the extremely bright Ducati high beam.

Setting up the Denalis was a bit of hard work. The floodlights cast a nearly spherical beam of diffuse light and that is very useful, but it also makes them confusing to focus properly. We kept wondering why the tops of buildings were getting lit by the D4s, ditto a tall tree literary above the lights, 8 feet away. But one we covered the flood LEDs, the bright hotspot of the spot LEDs is easy to fine tune and focus. Of course, the focus depends on the mount you buy, not on th D4 itself.

The wiring instructions were simple and we were able to get the wires installed exactly as recommended by the Denali instruction leaflet - specific to the motorcycle model. We were also lucky enough to find a female blank connector so the D4s are connected to the Ducati without any wires being cut, although in the included Post-Tap connectors are highly rated and minimally intrusive.

A quick demonstration of how powerful the Denali D4 lights are. The Ducati is in the OVERDRIVE basement and we cycle through low beam, high beam, high with D4s on and finally low beam with D4s on. Remember that the Ducati already has extremely powerful headlights, so the additional effect of the D4 is likely to be more pronounced on most motorcycles

But the truly impressive thing is that once we adjusted the lights to how I wanted it, the D4s are impeccable and infallible. I dropped the Ducati right on to the left side light. It destroyed the SW-Motech Hawk mount but the light itself was only lightly scratched - very impressive. They're also waterproof and extremely bright. When you are riding through a well-lit area, it is easy to think that the D4s make no difference but just turning them off dispels that illusions. Also note that they would be a lot more impressive on motorcycle which didn't have headlights as powerful as the Ducati to start with.

Obviously, having no mounting mechanism in the box is a downer because you're going to have to budget for another Rs 5,000-8,000 for the actual mount. I also didn't like the fact that the C-shaped metal mounts to the bottom of the light only which restricts your positioning abilities a bit. Sometimes I've seem motorcycles with the lights mounted upside down which makes them just a bit less effective. I first tried the SW-Motech Hawk mounts - which I rather liked and they're cost-effective too. After I crashed the Ducati Multistrada 1200 S, literally on to the lights, I was forced to switch to the Denali Auxiliary Light Mount which offers more adjustment but is also more expensive.

The flood lights, by design, do cause a small amount of dazzle and now and then, someone in oncoming traffic will flash a complaint. But I tend to keep them off in traffic and I've checked and re-checked, they're not blinding if you set up the spot lights right.

I love these Denali D4s although that doesn't take away from the fact that these are extremely expensive. Given how well they work on the Ducati, I would suspect that the gains in lumen count would be even more wonderful on bikes with less capable headlights.

They aren't small lights physically either, so they will interrupt the smooth lines of the motorcycle, there is no getting away from that. Big adventure tourers don't pay them no mind on this count, but a smaller machine would to be sure.

The argument that the unbranded cheap Chinese lights would cost a lot less and do that same task is a valid one. They are also unbranded and come without guarantee and I, for one, cannot imagine putting them on a motorcycle as electronic as this Ducati. So should you spend Rs 30,000 on a set of branded, effective lights like these or Rs 5,000 on un-branded ones? I would buy the D4s again but I would understand if you didn't agree. Price aside though, the D4s are brilliant and I am a happy customer.