I tend to favour race helmets. I've used one or the other top-of-the-line racing series Japanese helmet over the past decade or more. From that perspective, the Arai Tour-X4 represents a significant departure from my norm. Also, unlike many, I've only owned one helmet - most recently, the Arai RX-7V Ghost Red. Being able to switch between that one and this Catch Yellow Tour-X4 puts things in perspective. 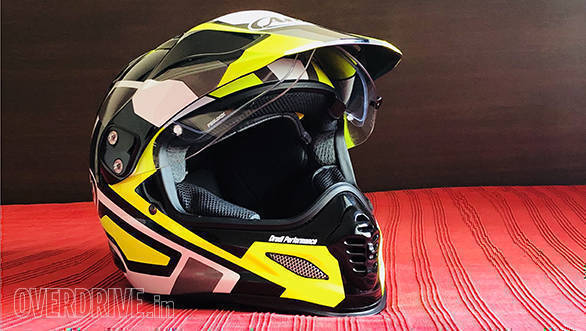 Arai Tour-X4, er, tour
The Tour-X line has helmets with a visor and a peak for the growing adventure tourer market. The X4 follows the same essential pattern. The shell is as round as possible - an Arai staple. But the jaw bar is slightly elongated to resemble a dirt helmet. A curved visor closes off the eyeport and atop that is the dirt bike helmet-style peak. The helmet looks cohesive as a design and a shape although it mixes elements of full-face and dirt-bike helmets. You can ride it with the peak and visor on an adv. If you have a big screen, this works rather well. You can also take the dirt more seriously by replacing the visor with a pair of MX goggles if you life. Or, you could turn the Tour-X4 into a more serious road helmet by removing the peak.

The chin bar is heavily vented with two side vents under metal mesh covers, plus two vertical centre vents together but with individual on-off switches. The top has two intakes with two more on the eyebrows - another Arai idea that works really well. The peak is designed to cut buffeting, reduce helmet lift and feed the twin top vents as well. At the back are two upper exhaust vents, low lower vents as well as the usual central vent just above the neck.

The Arai Tour-X4 has a completely removable interior. As usual, Arai uses double-D rings for retention. These are slightly fiddly to learn to use but the best retention mechanism of all because you cannot wear the helmet with a loose chinstrap.

Comfort
After three days of more than 6 hours each in the helmet, I can say with confidence that the Tour-X4 is a full-on Arai. The inner materials feel great on skin and the light weight - compared to the RX-7V - makes this easy. The longer snout also makes hydration valves easier to get to the mouth. In dusty or cold conditions, the little pull down chin spoiler also makes a difference to how much air comes into the helmet from the chin area. Without feeling loose, the X4 also feels more spacious than the RX-7V. And that's the difference between a race helmet - designed for short durations, a head-down riding position and with safety (and therefore not weight) at the top of the considerations list. The X4 is designed for exactly the opposite - long hours in the saddle, an upright head position and light weight (within the bounds of the safety requirements).

Venting
The top and eyebrow vents work well. Adv helmets assume a higher level of activity than normal street riding and need good venting. But the four vents in the chin are the business! The upper middle vent flows a ton of air when open. The vent below it is spectacular too, and you get a inner side switch that you use to close it. I discovered I needed it when riding in the dust or in the rain. The two metal mesh vents on the side also open and close and add another significant stream of air. So much so that riding in the heat with all the vents open, I found a small patch of diesel soot on my nose just as if I were riding with an MX helmet and goggles instead of the Tour-X4. The wide eye-port and big chin vents also seem to allow the X4 to dry faster between rides. 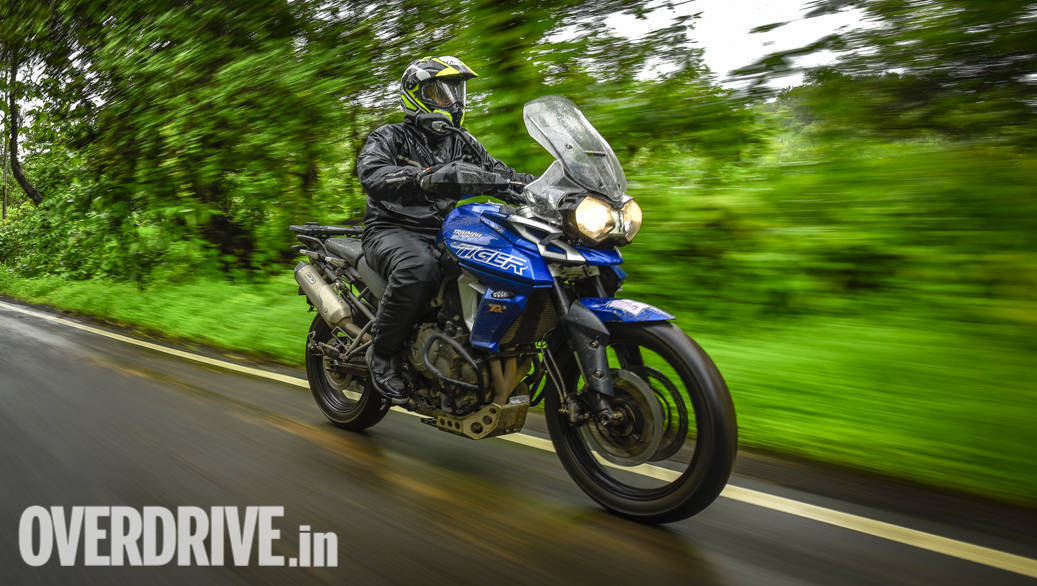 I had quite a bit of fogging up until I installed the Pinlock insert - after this I've had none at all. Pinlock is a simple thin plastic visor with a cylindrical bead along the edge. It mounts to two eccentric pins on the visor and creates an air gap that resists fogging. The eccentric pins can be turned with a screw-driver or coin to ensure that the bead seats all the way round correctly. 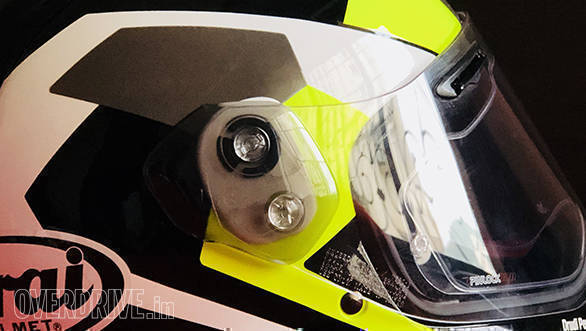 I've two grouses with the visor mechanism. First, the simplicity of the mechanism means I do not get a small lever I can use to crack the visor open in the rains for ventilation or de-fogging. But more importantly, it's super hard to change visors - and I like to switch to a clear visor for the night and back to a dark one in the day. On the Tour-X4, this means finding a coin, carefully attacking four plastic screws, taking the peak fully off while keeping the two superthin retainers in place. And then backwards to mount the other visor. I'm hoping Arai does a simpler mechanism for the next Tour-series helmet.

On the flip side, the visor is so good that I often find myself reaching up and touching it verify that its closed. The curves in the plastic on the Tour-X4 are a lot more severe than the RX-7V, but both visors are super clear.

Buffeting with the peak
There is some with certain screen heights to be sure. And when you're new to it you will also catch wind under the peak and feel the helmet lift gently in the wind. But two things happen. First, the buffeting never seems to be serious. Second, you naturally learn that there is a angle at which the peak just cuts through the wind without any lift and start using that angle for all the fast work. I actually tried it without for a while and returned to the peak-ed configuration because it seems to cause me no bother at all in my usual riding cycle. And the few times the sun came out in this gloomy season, I also found that the peak shades the eyes well in early morning or pre-dusk riding.

Other Arai Tour-X4 configurations
I tried the Tour-X4 without the peak for a couple of days and it works well as a street helmet. The elongated chin bar looks slightly odd but that's about it. After my experiment was over though,I went back to the visor and peak configuration I've found works well enough for me.

Crash safety
While the Arai isn't tested to meet the Indian BSI or ISI standards, it does meet and exceed the Snell M2015 standard as well as the ECE 22.05 and others. The Indian standard was based on the ECE 22.03 and in that sense, the Arai is definitely more than the BSI standard requires.

Arai of Japan still makes some of the world's best helmets in my book. The Tour-X4 is neither as high-spec as the RX-7V, nor it is as expensive. But still, the quality of the finish and materials feels the same. The slightly lower-spec shell material results in a lighter helmet that sits easily on the head for hours together, flows tons of air and you'll feel no strain on long rides. My biggest grouse is the visor mechanism. It's needlessly complex and has two-three small bits that need to be taken care of, hard to do, for example, when you're switching from the full configuration to riding off-road with goggles and the peak. I must also add a special appreciation to the Catch Yellow colour scheme from Drudi Performance. The grey bits in the photos are all retroreflective - they grow white when light falls on them. I love that idea that in the night, my helmet has built-in reflectives visible from every conceivable angle. 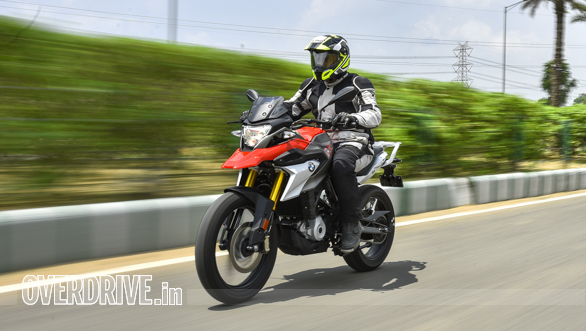 With prices starting at Rs 55,000 - add Rs 10,000 for graphics (and Arai has a similar step up in prices globally for the Tour-X4s too) - the Tour-X4 is significantly more comfortable, better ventilated and versatile than, for instance, the race-spec, top-of-the-line RX-7V which easily hits north of Rs 75,000. I am also surprised that how afforable (fine, relative term) the visor and a replacement pinlock is.

All told them, I highly, highly recommend the Tour-X4 as a helmet for everyone but the hardcore sportsbike junkie. And now I understand why my Tour-X4 is now the third Tour X-series helmet amongst the OVERDRIVE rider group. They're just that good!