The OVERDRIVE India Superbike Festival returned to Pune and what a show it turned out to be. The last time, the ODISF Pune broke all records bringing together over 500 superbikes with over 2 lakh people coming to the venue to see the biggest big bike and motorcycle performance show that India currently has. This time around, the India Superbike Festival grew by an order of magnitude. 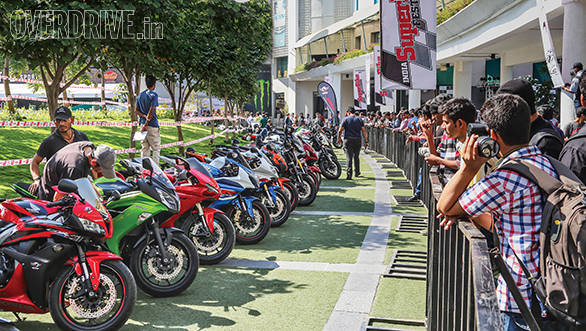 The epic line-up of motorcycles broke all records for an Indian event. The spectators over the weekend also turned up in unprecedented numbers

The two day event was held over a weekend at Pune's Amanora Town Centre recently and by 3 o'clock on Saturday, the ODISF Pune had already broken the record set by the previous festival. The mall that was the venue simultaneously recorded its highest ever footfall traffic in its history while many establishments that partnered with the ISF to host the superbness posted their best business days on record. Boy did the ISF make some noise! So loud was the event that you could even hear it on Red FM 93.5, the official radio partner. 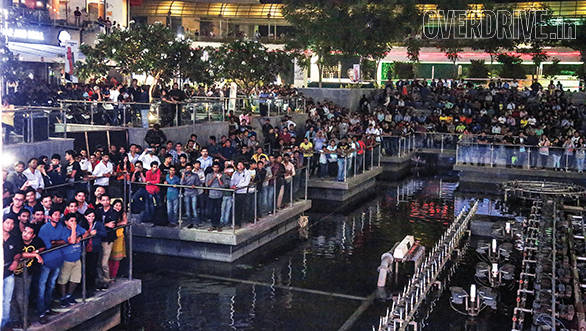 A massive crowd collected to watch our famous on-stage contests

After the tremendous response to the previous event, the registrations came in thick and fast and we knew that all over India, bikes were being prepped for their day in the limelight. Louder exhausts were added for our extremely popular loudest motorcycle competition while other owners were sprucing up their bikes to show off their personal tastes in motorcycles. With a number of clubs from all over Maharashtra and beyond lining up to put on a show and an equally large number of clubs joining the festivities for the first time, we knew it was going to be big. 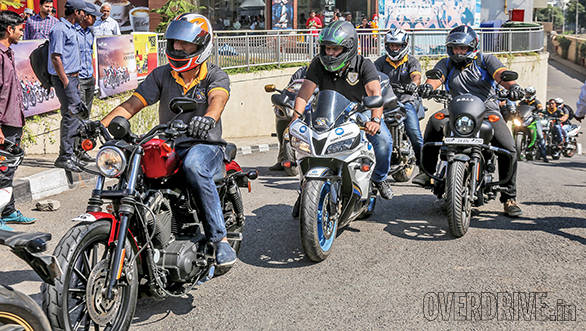 More and more big bikes rolled in as the beautiful, spacious mall reverberated with the sound of big engines

The bikes started rolling in early on Saturday and the beautiful, spacious mall reverberated with the sound of big engines as gleaming high performance machinery rolled in to take centre stage. A million cellphones clicked photos and videos while the clubs, in full regalia occupied the expansive parking area in the middle of the event. The press of the spectating crowd meant that the melee to ogle at the bikes was going to remain strong and frantic right till the last bike roared away into the Pune night on Sunday. 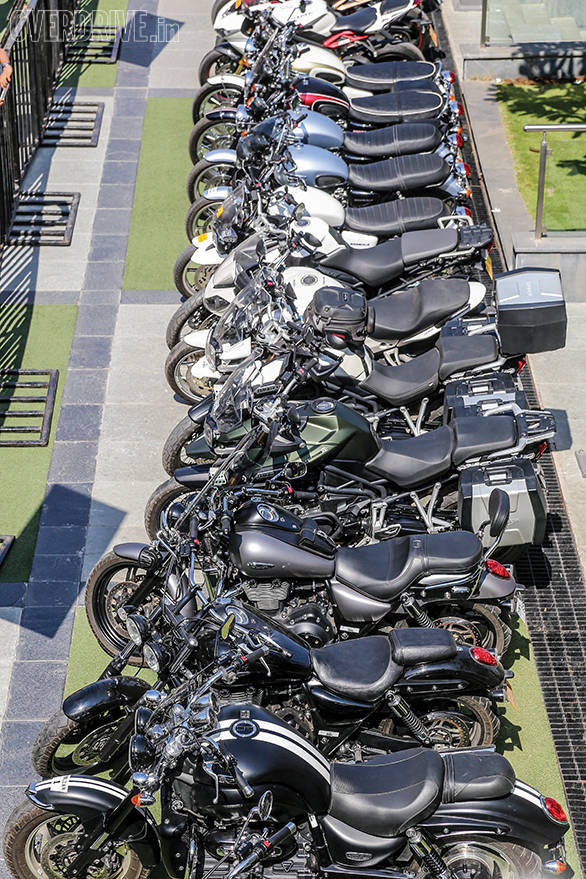 This is the Triumph club, one of the many that turned up

In the cool of the late afternoon, the main stage roared to life with OVERDRIVE editor Bertrand D'souza and MC Gavin opening the competitions that have rapidly become an extraordinarily popular event at the ISF. Within minutes, the massive open air seating and viewing area was full of nearly 40,000 youngsters who craned their necks, yelled and screamed wildly, clapped and cheered for four hours straight as India's top motorcycles took centre stage in a stunning display of power, passion and volume.

Some stunning customised motorcycles in cruiser, street as well as sports categories showed off how passionate and well-versed the Indian bike owners are. Then came the loudest bikes which literally threatened to drown out the wild crowd. 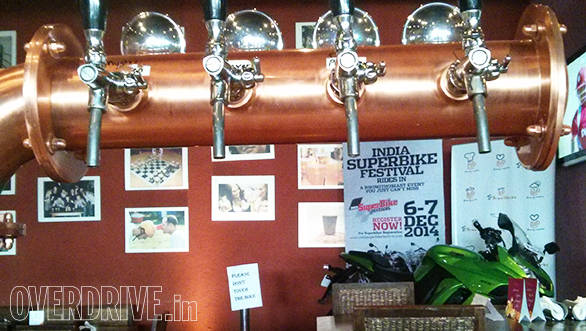 TJ's Brew Works, the official after hours partner, was absolutely full of bikers and conversation

By the time the bands replaced the motorcycles on the stage, the twilight was lit up by smiles and good cheer and the crowd simply grew and grew. The music ushered in the night as the action shifted from the bikes and the displays to the various restaurants and night clubs in Amanora Town Centre. TJ's Brew Works, the official after hours partner, was absolutely full of bikers and conversation. And don't forget to try their Korean beef. It's terrific! The quiet around the bikes was just the lull before the storm hit on Sunday.

Even more bikes turned up the next day and then came wave upon wave of motorcycle enthusiasts with dreams of big bikes in their heads, adrenaline in their veins and the sparkle of seeing their dream machines up close in their eyes. It was amazing to meet so many of our readers and fans in the crowd. 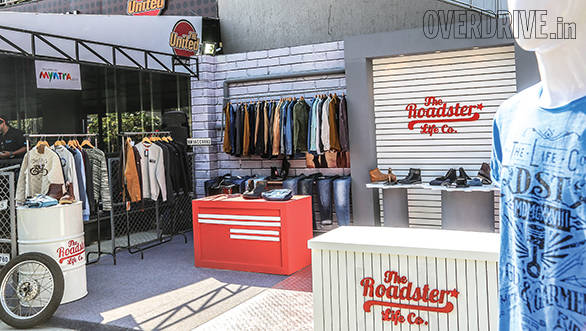 The Roadster's stall during its setup - it wouldn't remain empty thereafter at all! 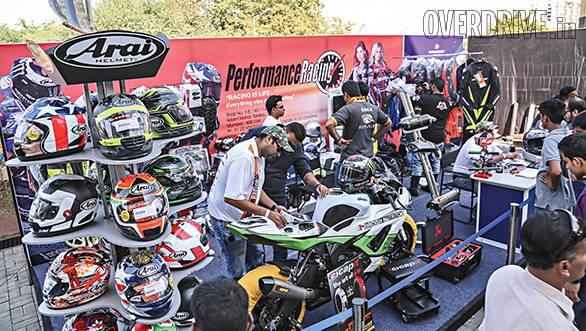 Meanwhile the Performance Racing stand is already busy with customers

Meanwhile, for the exhibitors that dotted the ODISF venue, a second extremely busy day was getting underway. Performance Racing, X-Torque and Planet DSG/Alpinestars are ISF regulars and they were prepared for the onslaught. Newcomers British Nutritions, MotoVerse and official ISF apparel partner The Roadster were swamped. Whether it was motorcycle riding gear or motorcycle care products or luggage, the stalls were full of open wallets and excited chatter. 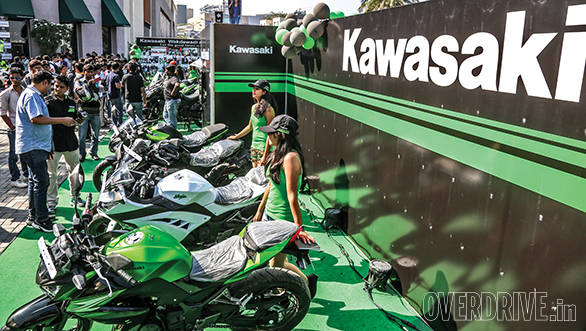 Kawasaki showed off the new Z250, ER-6n and Versys 1000 to the public for the first time 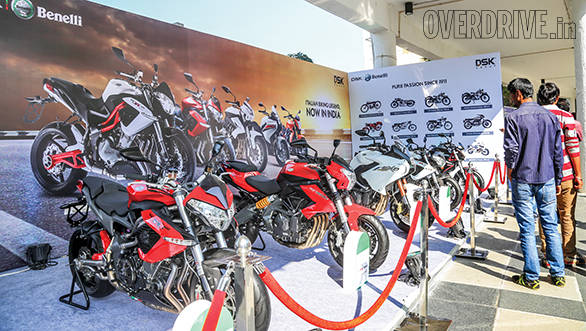 Busier still were the manufacturers' stalls. Benelli introduced their full line-up of Italian beauties to the public for the first time at the ISF Pune and their stall was a perennially thronged place. Similarly, the beautiful and expansive line-up of Triumph motorcycles always had an appreciative audience. On the other side were Kawasaki India who were showing off their whole line-up including the public debut of the Kawasaki Versys 1000 which goes on sale in March 2015. Also meeting the public for the first time was Kawasaki's first dealership in Mumbai, Palm Beach Kawasaki. Then, Suzuki India and their Pune outlet, Dream Suzuki debuted India's first MotoGP replica GSX-R1000 which was then delivered at the ISF to its proud owner. Also making the first delivery were Kawasaki who handed the keys to India's first Versys 1000 to its proud owner.

And then over the PA came the words everyone was waiting for. "Ladies and gentlemen, it's time to anoint the King of Burnout!" Within moments the arena was buzzing with excitement as thousands pressed against the barricades as superbikes lined up to see who could do the smokiest, most dramatic burnout. They didn't stop until the rear tyres were reduced to a handful of metal wires and the cheering and clapping never stopped. Young Pratik Gala on his Yamaha YZF-R1 did a spectacular job of killing the rear tyre and was crowned King. 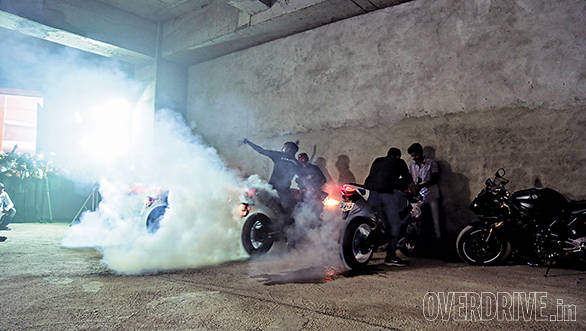 More cheering was reserved for the ultra-smoky burnout contest

Then the action shifted back to the stage for the finals of the loudest bike and best accessorised bike competitions. After a string of deliciously personalised and unique motorcycles, it was time to see which one was the loudest motorcycle of them all. Harjeet Singh of Dream Sporting Gear, Vicky Jaising of Performance Racing and Abhijeet Khinvasara of X-Torque joined OVERDRIVE executive editor, Shumi in judging the best accessorised motorcycle contest. Amongst the winners were Azeem Shaikh's stunning Ducati Diavel AMG edition, Abhijit Chavan on his Honda CBR954RR, Imran Shaikh's Suzuki Hayabusa and Moin Sayyed's lovely Harley-Davidson Forty-Eight. 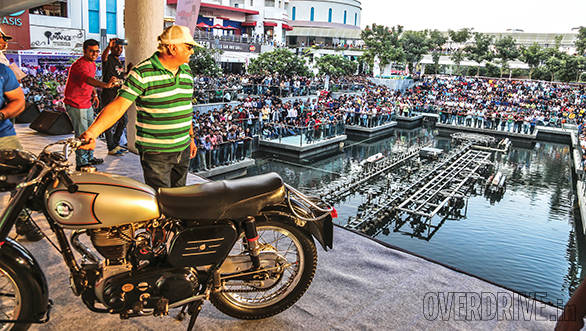 When Reuben Solomon turned up the volume with his beautiful (and loud) Norton, the crowd roared back its approval

Thousands of people in the audience now waited for the loudest bike competition. And there were some fearsome battles coming. But as usual, the quiet presence of our vintage and classic motorcycles display burst on to the stage in a terrific and widely applauded display of old world charm and performance. Reuben Solomon's Norton, for instance, was so beautiful and loud that the crowd basically wouldn't let him turn it off or get off the stage. 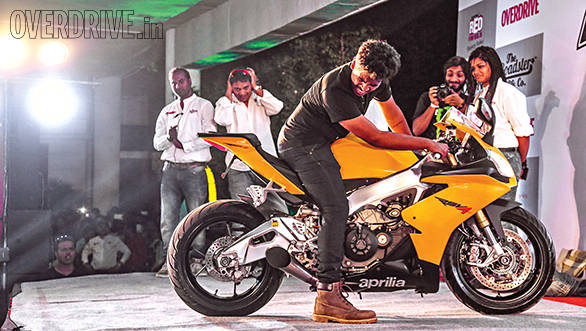 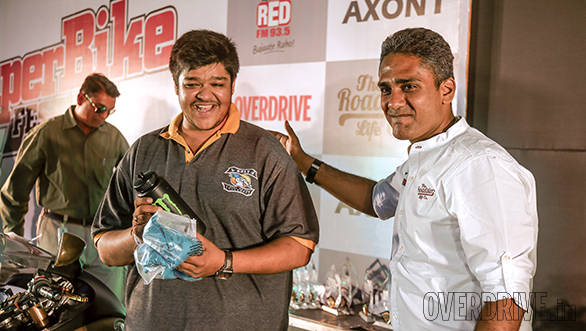 Ultimately, the loudest bike was the yellow Aprilia RSV4 belonging to Soham Jadhav that absolutely roared to victory defeating all comers as the loudest bike of them all. Other winners included Sachin Jagtap's Kawasaki Z800 and Dhruv's Suzuki Hayabusa. Karan Kullur, whose Harley with its lovely gold metal flake paint drew quite the crowd and gained a nickname - Candy Crush - and then won both best accessorised as well as loudest bike in its class.

Then, as night fell, the bands once again took over the stage and rocked into the night while the superbikes, especially the ones that had hundreds of kilometres to cover before they got home started leaving. The club flags were back out, the revving engines shook window panes all over the mall as the ODISF Pune came to a close in a shattering crescendo breaking all records and creating a new benchmark for the OVERDRIVE India Superbike Festival to beat next time. 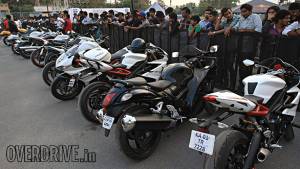 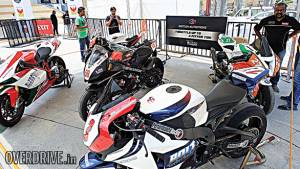