Rezang La, situated at a height of around 16,404 feet above sea level isn't even one of the highest passes in Ladakh. In fact, it's nowhere close in altitude to the passes that fall on the Manali-Leh highway. Yet its significance in the history of India stands taller than any peak in the region. 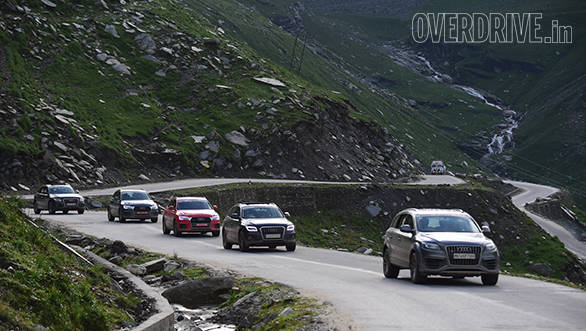 On November 18, 1962, waves of Chinese forces crossed into India over Rezang La into the Chushul Valley. Defending this section were 124 Indian soldiers of 'C' company who were isolated from the rest of their regiment, the 13 Kumaon battalion because of the lay of the land. Artillery support could not be summoned upon to defend this feature because of ridges that blocked artillery fire. Commanded by Major Shaitan Singh, these soldiers fought nearly to the last man. As the body count piled up, the ammunition count dipped. The battle that had begun at dawn as the light brought visibility to the region carried on well past sundown. Towards the end, the Indian soldiers fought against the Chinese, man to man, screwing in their bayonets for one last stand. 114 of them gave up their lives trying to keep the Chinese wave from overcoming their positions. 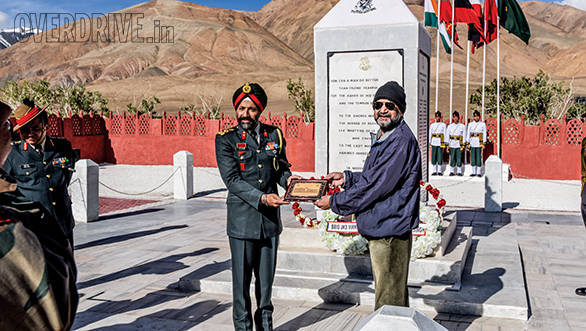 Major Shaitan Singh was one of the casualties in this theatre of war having fought and motivated his men valiantly. Shaitan Singh kept weaving from bunker to bunker providing support and rallying his men until a Chinese sniper wounded him and he eventually died of his wounds. Shaitan Singh was the ninth Indian soldier and the sixth to posthumously receive a Param Vir Chakra, India's highest military decoration, for his supreme sacrifice. 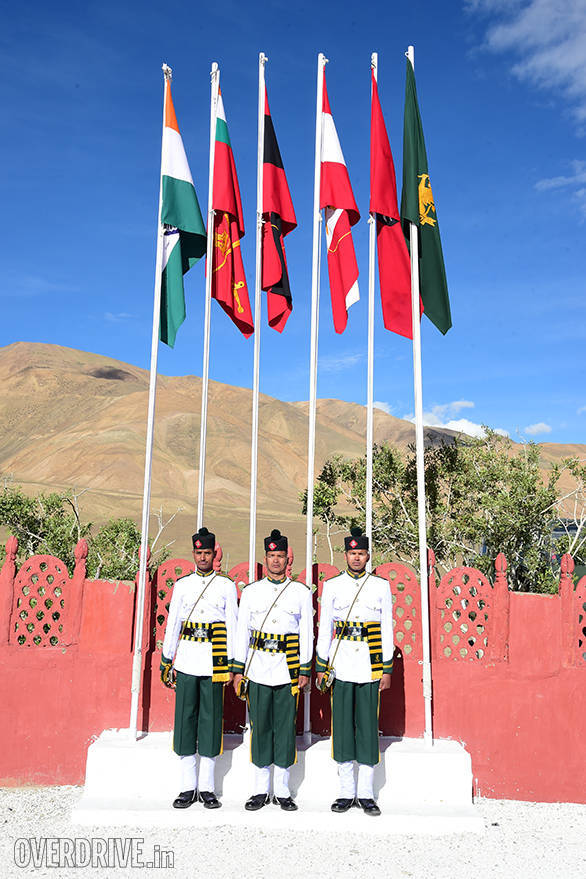 I could certainly not have narrated this incident with the same passion that soldier did at the memorial service for the martyrs of the 13 Kumaon regiment. As he stood there, with the morning sun beating down fiercely on his face, the power of his sentiments raised goosebumps on all of us present there that day. You could hear a pin drop if it were not for his voice that I'm sure would have carried over to the Chinese side of the border, which as the crow flies, was just some 5 kilometres from where we stood. In this, the third year of the Independence Quattro Drive, we couldn't have asked for a moment of greater pride. From the corner of my eye, I knew I saw someone wiping moisture from his eyes. 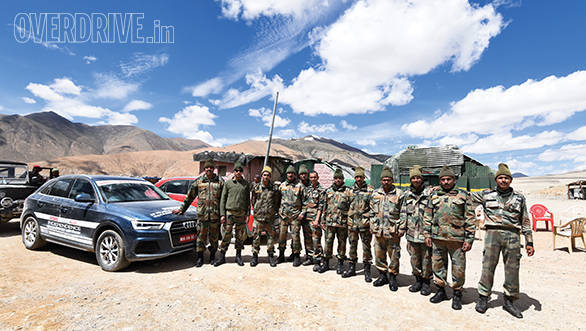 Soldiers at the Chushul base camp pose with the Audi

At this altitude, the service industry is of a different nature. It involves braving biting cold where mercury often falls 40 below zero and still manning your post. It involves breathing in lesser oxygen without breaking your step as you keep a sharp eye out for intruders. Supplies are scarce and so is human company, but commitment and dedication are called on 24/7. In the last two editions of the Independence Quattro Drive, participants came to Ladakh and proudly hoisted the national flag as we celebrated our freedom on Independence Day. This year though, for the first time, nearly twice the number of participants were provided the opportunity to celebrate their freedom with the protectors of that freedom. 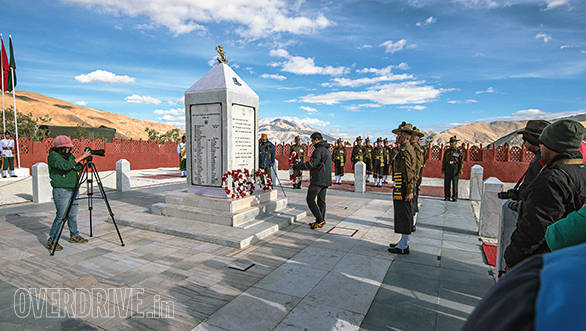 I myself was finding it hard to hold back my emotions from engulfing me as I received the honour along with Hari Singh, our convoy leader and Charmi Thakkar, a participant on the IQD 2015 of laying a wreath at the memorial to the martyrs of that fateful day. Curiously, one thought that did cross my mind, strange as it may seem considering the occasion, was just how impeccably turned out the defence personnel were compared to our ragged bunch. The creases on their uniforms could have sliced the fruit for our breakfast that morning while we were continuously fidgeting with our monkey caps and scarves and jackets. Some of us appeared to have crawled in the mud and dust to get to the Rezang La memorial - unshaven, hair unkempt and looking all weary. 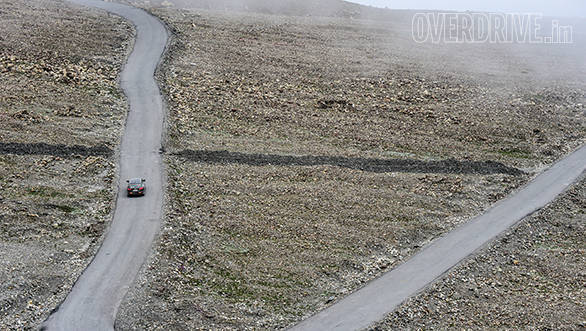 The road up Baralacha La is windy, smooth and fast, ideal terrain for the Audi

The truth of the matter though was that we were weary, at least the first lot of travellers on this journey who had started off from Chandigarh. When the Independence Quattro Drive adventure seekers set off from Chandigarh, we were around 25 in number. 10 participants and the rest making up the support staff, photographers, videographers, instructors and Team OD 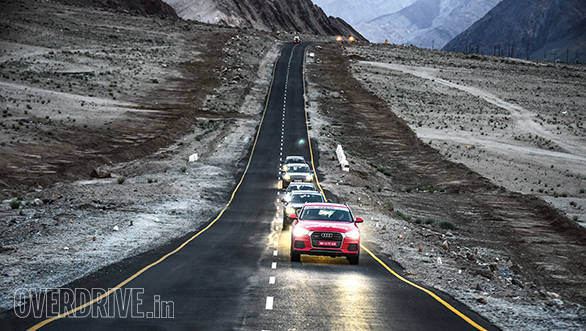 In Leh, we were joined by seven more who would take on the second leg of the journey, accompanying the first bunch to hoist the flag at Chushul and then driving back to Chandigarh from Leh. Like every other year, we'd be driving a phenomenal bunch of SUVs from the Audi stable - the Q3, the Q5 and the Q7. 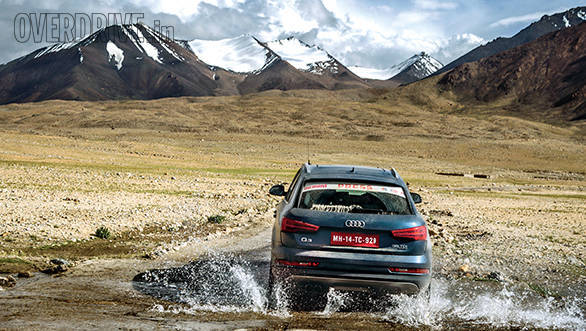 If there were any doubts at all as to the abilities of these vehicles in the harshness of Ladakh, they were soon dispelled into the rarefied air before the first bunch of participants even got to Leh. Darshna Tikle would know  the woman has worked on the designs of the HVAC system for Ferrari, Maserati, Alfa Romeo and others and knows a thing or two about temperature comfort. But she and many of the others also did learn several new things about driving these SUVs in these conditions, how to treat them right and in return, be rewarded ten-fold. 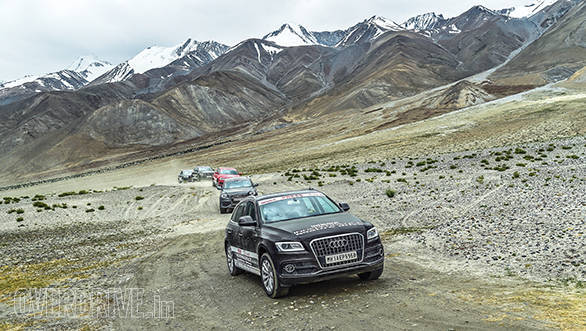 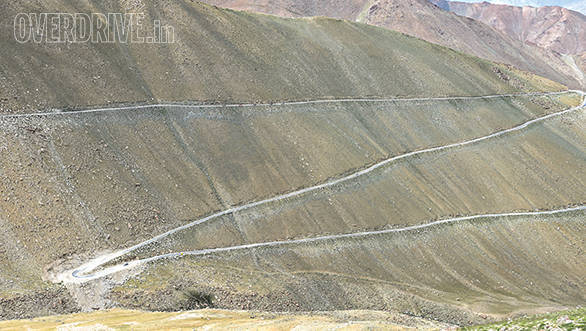 So yes, while we did make our way to Chushul in immense comfort, the altitude, cold, lack of oxygen, limited choice of sustenance and the isolation you feel when in the Himalayas were together proving to be a hard-as-nails drill sergeant. We did have a few casualties  Harsh Thakkar from Mumbai kept falling ill because of altitude sickness while Rishabh Agarwal from Kolkata was invariably affected by motion sickness. And yet, we soldiered on first towards Leh and then towards camp at Chushul. 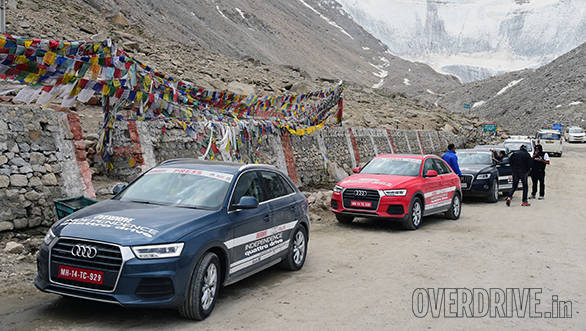 The drive to Chushul is quite pleasant though you do hit Chang La, the second highest mountain pass in this region after Khardung La. From Leh, you head towards Karu, then turn towards Tangtse and once past the check post, stay right to branch off towards Chushul. The route we were following this year would see us circle from Tangtse to Chushul, then the Rezang La War Memorial before heading off towards Pangong and then making our way back to Tangtse and eventually winding back in Leh. 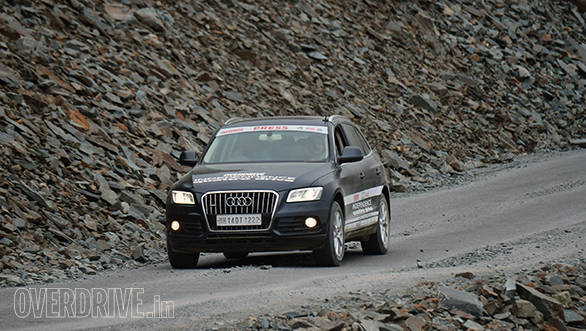 Almost everyone did feel some of the effects of the altitude but overall we had enough energy in us to even play a game of volleyball at our campsites at Chushul and Pangong. Call this bunch a little crazy but there is nothing like breaking into a little sweat in these unpolluted environs. 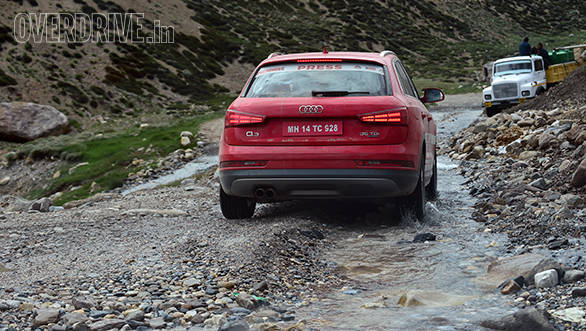 Interestingly and despite having all the right communication equipment, one team in the red Q3 did manage to get lost from the main convoy soon after Tangtse. Despite several efforts to make radio contact and even sending one of the taxis we had commandeered from Leh in pursuit, we failed to catch up with that team. Fortunately though, Ladakh is very difficult to get lost in since most destinations can be reached by either one, sometimes two, or at most three different routes. So we knew that with a little bit of common sense and cocooned inside our sturdy, dependable vehicles, we'd soon be a full convoy at Chushul. Our estimates were spot on. As soon as we entered the village of Chushul, Saurabh Tomar and team came through on the radios indicating they were just a kilometre behind us, albeit on a more northerly route. So while they did manage to find an adventure of their own, they were now also the first ones to bear witness to the route we would be following the next day from Chushul to Pangong. 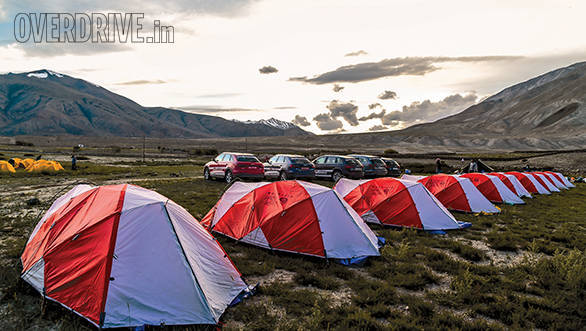 The campsite at Chushul, with good food and comfortable sleeping bags 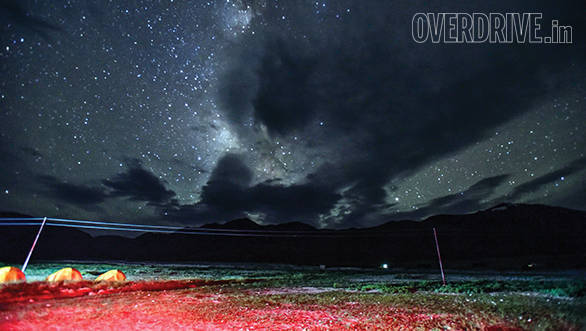 Both nights on this loop between Leh, Chushul and Pangong would be spent in tents at a campsite nestled in the mountains. I was initially a bit apprehensive if the newbies to Ladakh would spend the night cooped up in clumps of ones and twos in their respective tents. I was, in fact, preparing for some of them to come to me requesting me to let them sleep in the SUVs, though I doubt the thought ever crossed their minds. In the morning, however, while some were still groggy from a fitful sleep, others slept like the dead, oblivious to the cold, thin ground sheets and a dog who howled incessantly through the night! Nonetheless, with an early morning breakfast of just some tea, coffee and cookies, we set off for the Rezang La war memorial. 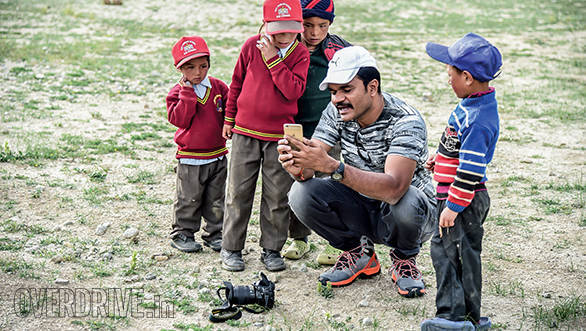 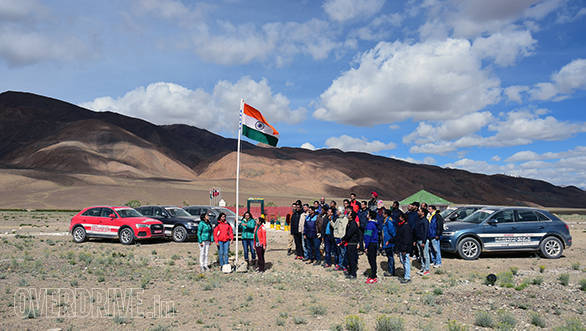 After participating in the Martyr's Day ceremony, we had a ceremony of our own to conduct. The honour of raising the Indian national flag to full mast was given to the four women on this journey­­ ­ Darshana Tikle from Bangalore, Charmi Thakkar from Mumbai, RJ Swati Sharma from Delhi and our producer, Sohini Dutt. None of these four seemed to be suffering from the debilitating effects of altitude that had struck down a few of the men. And so it was with great pride that we hoisted the flag, sang the national anthem (thrice for the cameras) and posed for photographs right alongside the China border. An hour later, we were on our way to Pangong for a rendezvous with the lake. 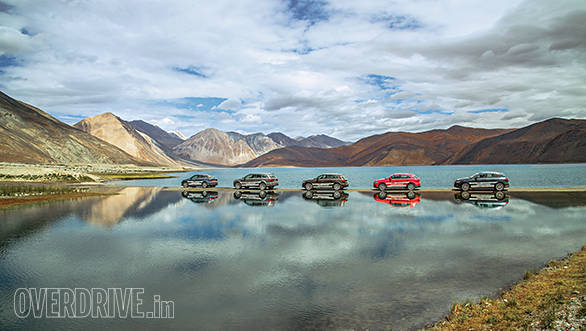 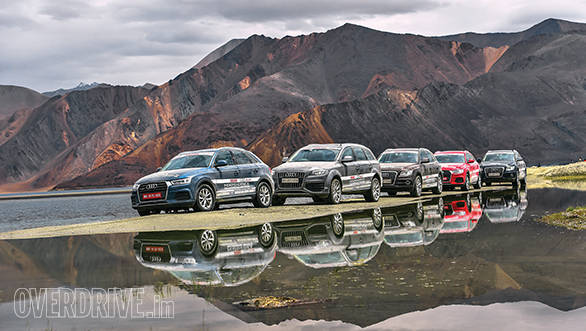 Pangong is, as expected, always a crowd pleaser. Nothing in the world can prepare you for a sight of the lake snuggled in between the Himalayas as it sparkles and dances in its various shades of turquoise and aquamarine. And then the drive alongside it as the lake keeps changing colour is an experience out of this world. I'm guessing Narendra HS and Nilesh Vagal, both superbike enthusiasts, owners and track day junkies, never ever experienced a high like this. 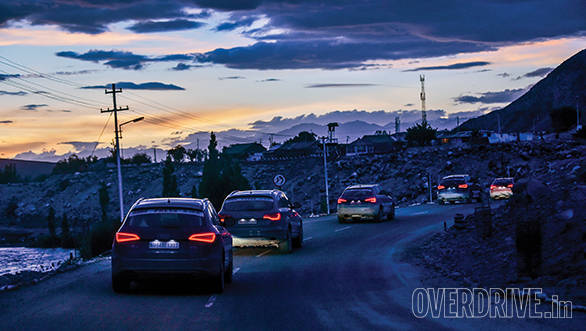 At Pangong, we were back to our game of volleyball, this time with the lake playing spectator. Some found solace simply walking alongside and staring into the azure waters of the lake. As for the rest, they simply found a bed to fall into. And that's the beauty of Pangong - it can invigorate you with a shot of fresh energy or give you the space to slow down and unwind. It's one of my favourite pilgrimages, and after this trip I'm certain several others who joined Team OVERDRIVE on this journey are going to keep chanting Ladakh's name at least once every year. For all of these city weary souls, the Independence Quattro Drive was indeed a tiny slice of paradise! 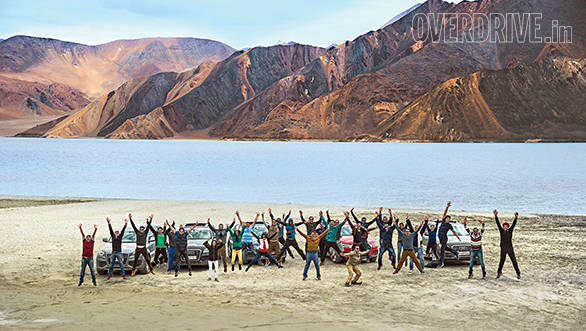 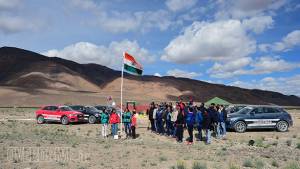 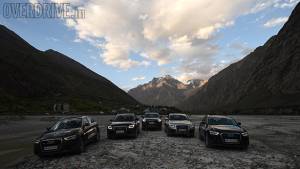