What the heck is this?" we thought to ourselves when we first extracted the BluArmor BluSnap from its BluBox. But then we read the tag line, keep a cool head and proceeded in a more, erm, scientific manner. The company's representatives say that the brand, BluArmor is into personal cooling solutions and the BluSnap the first product they've released into the market. What it is meant to do, simply, is use a combination of forced ventilation and evaporative cooling to allow commuters remain cool on their trips in and around the city. Future editions will aim to reduce the size of the BluSnap as well as add a host of interesting connectivity features outside of the usual hands-free calling and what have you. Let's look closer, shall we? 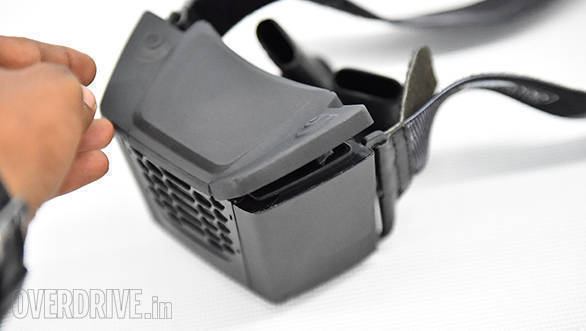 BluArmor is a brand created by AptEner Mechatronics that was founded by a gentleman called Dr Sundarajan Krishnan (PK). PK, a highly qualified engineer, was part of the founding team and business unit head of the IP business at Cosmic Circuits, a Bangalore-based semiconductor IP company that was acquired by Cadence Design Systems in 2013. PK's team includes two senior professors for the mechanical design, one of India's top industrial designers and others. Also in there is Halley Prabhakar, ex-OVERDRIVE and Arvind Prabhakar who runs multiple design and motorcycle-related ventures - both were part of the testing team.

In essence, the BluSnap is a box that is attached to the chin of the helmet by an elastic strap not unlike the one on a motocross goggle. BluSnap offers two strips of foam tape to ensure that the contact of the box with the shell doesn't damage the shell in any way. All the inner components are rubber - and we will deal with crash performance in a moment. 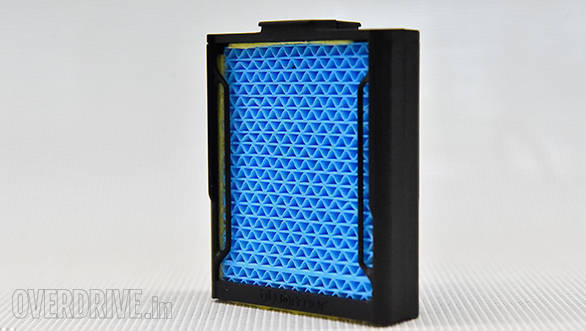 Inside the box are a handful of components. On the outside, you can see a dust filter, behind which is a small, quiet fan that produces the forced ventilation. To run this fan, the box includes a small rechargeable battery that's good for 10 hours of running on one charge. The charging port is hidden on the top surface under a sturdy layer of rubber which makes it waterproof and it contains the on-off button for the fan 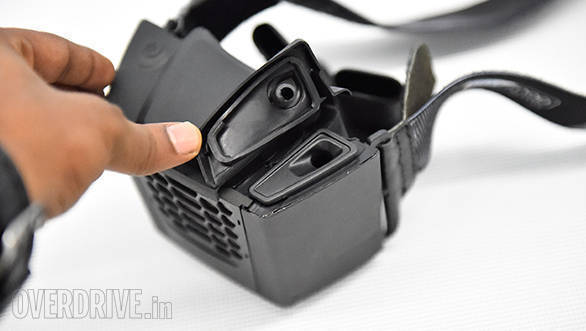 On the opposite side of the the rubber 'shelf' is a hole for the water reservoir - 60ml. For evaporative cooling, behind the fan is a antimicrobial plastic filter with foam surround. The foam is not dissimilar to your kitchen sponge. The idea is that once you open the valve to the reservoir via a rotary knob at the bottom, the foam wicks water off the reservoir while the fan causes this water to evaporate and cool the air. BluArmor says 60ml should last 1.5-2 hours depending on conditions. Behind the fan and filter is a simple system that directs the cool air under the chin bar and into the helmet via two rubber channels. 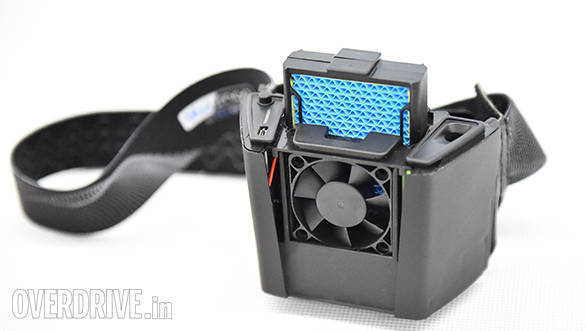 How to mount it?

The BluSnap is worn on the chin bar of your helmet. BluArmor told us that all the helmet makers they spoke to told them that the chin was the safest place - you want to leave the shell alone so that its spherical shape can do its job in a crash. You direct the rubber tubes up into the chin area until the chin bar rests of the shelf and the BluSnap has a curved back that should cause the box to sit firmly against the chinbar once the elastic has been placed correctly. 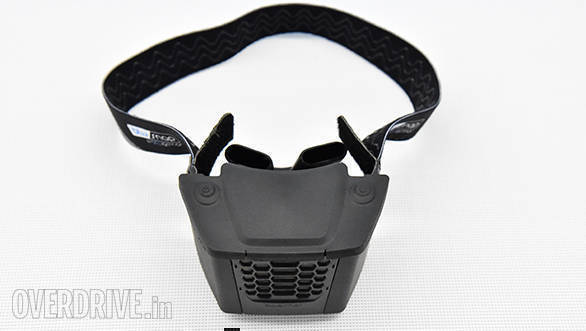 What happens when you crash?

This is the thing that immediately drew the most questions from the OD team as the item was unboxed. BluArmor says that did make a few simulations and some tests and they have accounted for crashes. BluArmor says that as a product directed towards the commuter, they aren't expecting to have their customers use these at high speed. Also, the forced cooling is really needed only slow speeds or when stopped in traffic. The snaps into which the elastic goes as well as the box itself are designed to crumble and break away in a crash leaving the helmet free to do its job.

What will it do? 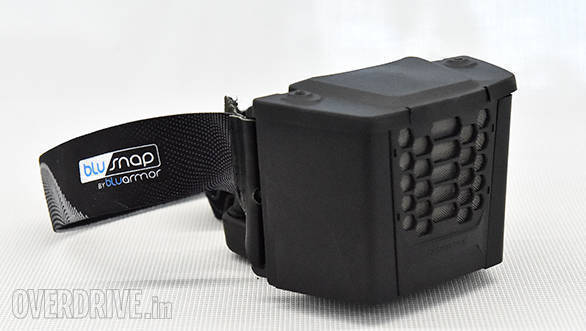 What BluArmor says is that their measurements show that the exterior ambient temperature drops 6 to 15 degrees celsius with the BluSnap running. The evaporative cooling, however, takes a minute of two to get going as the sponge wicks water from the reservoir. The speed of airflow is carefully regulated so as to be comfortable and the filter is washable - BluArmor didn't want to create a use and throw filter. The whole package costs Rs 1,849, going up to Rs 2,299 approximately for an extra filter, shipping and taxes. Stay tuned for our test report shortly. 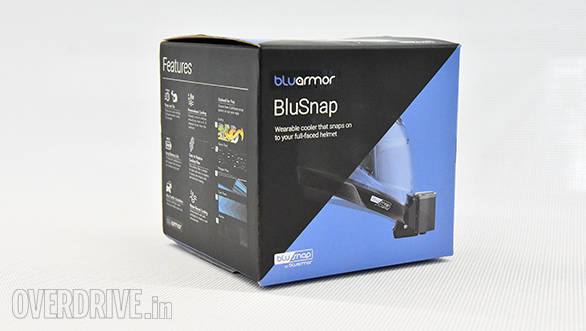 Unfortunatley, no. The BluSnap's fan is IP56 compliant which means it will handle light rain and all the electronics are encased in resin. But the unit isn't submersible and therefore BluArmor says "user discretion is advised while riding in heavy rain"