With a good six months since the launch of the fourth generation Honda City, and with almost every media outlet now done with reviewing the car, we have finally got a top-spec Honda City VX i-DTEC for a long-term test. This also means that our test car, though only a 1000 kilometres old, had exchanged quite a few hands and had been subject to all sorts of driving tests before it came to us. 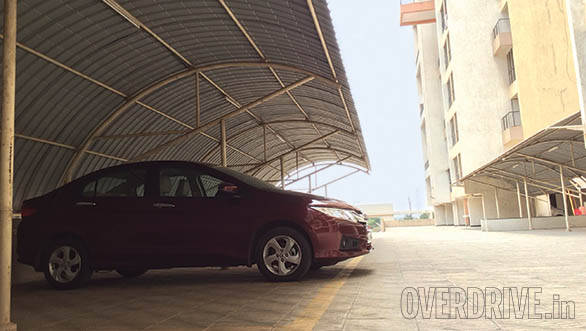 When Halley brought the car to office, it already had an issue with the shifter showing reluctance once in a while to slot into reverse gear. While stationary, slotting the gearbox into first and then pulling it back to reverse seems to work most times. But on a cold start, I usually need to use force to push it into reverse. So as you can imagine, it is quite irritating when I need to park the car into tight spaces in the office parking lot  or worse, when parking out on the street and holding up traffic as I battle with the gearbox. I hope this gets sorted with a quick service as this issue could pose a massive problem once the rains set in and water starts clogging up the streets of Mumbai.

Apart from this glitch though, everything else in the City seems normal like in its sibling that we pitted against the Verna a few months back. Shifting from a Swift to the City for a daily driver, I have immediately come to appreciate the larger seats. I particularly like the lumbar support and the side cushioning. The VX trim brings leather upholstery to the seats, but at times when I need to park the car in an uncovered space, the leathers tend to heat up quickly. Cooling the cabin takes about a minute even with the Mumbai summer running at full steam and the lighter colours makes things easier compared to the Swift's all-black cabin.

Interestingly, when Halley drove in, he managed to give me the car with a fuel economy figure of 21kmpl on the instrumentation. Having hardly spent a weekend with the City, I'm yet to reach a stable fuel efficiency figure. But the big fuel efficiency claims tempt me to hit the highway soon. We'll apprise you on how she fares.