On Thursday this week, September 15, 2016, Triumph will aim to officially become the maker of the fastest motorcycle in history. Its Triumph Infor Rocket Streamliner is aiming to surpass the current record 376mph or 605.1kmph. Triumph's rider, famous British nutcase Guy Martin, wants to hit 400mph or 643.74km. Yes, that is frankly insane, but the human quest to push the limit is one of the things that make us such a special race.

Here is everything you need to know 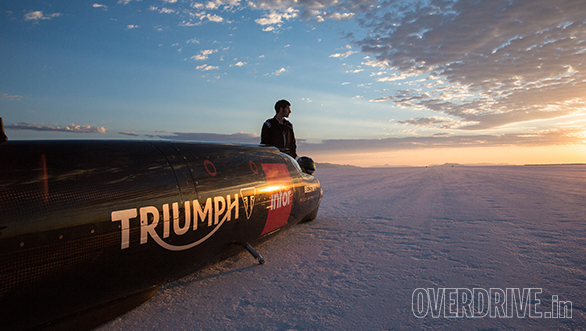 Is this a race?

Not in the conventional sense, no. The competitors race to record the fastest time, but this isn't the sort of event that lends itself to running parallel or concurrently. So even if multiple teams, all from the same category and class are out on the course, it's still one vehicle at a time.

How does the event work?

The Bonneville Speedway is an 11-mile straight course. You get five miles to accelerate up to speed and then Mile Six is where the speed measurement happens, over the mile. Miles Seven through Eleven are for slowing down. To record an official run, each competitor must turn around the complete the course in reverse within two hours to cancel the effect of the wind. The final record speed is the average from both runs.

What's so special about the salt?

The spread and area of the salt flats in Utah are hard to explain. The Bonneville Speedway offers an uninterrupted flat expanse where speed runs can happen without obstruction or distraction. The Salt Lake was formed as the lake evaporated, and evaporation causes a perfectly flat salt deposit which enables the speed runs. As Matt Markstaller of the Triumph Team explained, if the crosswind takes the Triumph Infor Rocket Streamliner off-course, god forbid, Guy Martin basically has to steer it gently to a stop without falling over. The off-course salt is a bit coarser, but there is nothing to hit or crash into for absolutely miles in every direction.

Where are these Bonneville Salt Flats, then?

The salt flats cover enormous areas around Salt Lake City, Utah, USA. The Bonneville Speedway is located just 10 minutes outside the town of West Wendover which happens to be just across the state line in Nevada. Which is why this article is being written in a casino. Flights come to Salt Lake City which is about 180km from the speedway and 190km from Wendover. Wendover, incidentally, is famous only for its historic airfield from where Ebola Gay, the B-52 that carried the nuclear bombs that destroyed Hiroshima and Nagasaki and ended the Second World War, took off from. 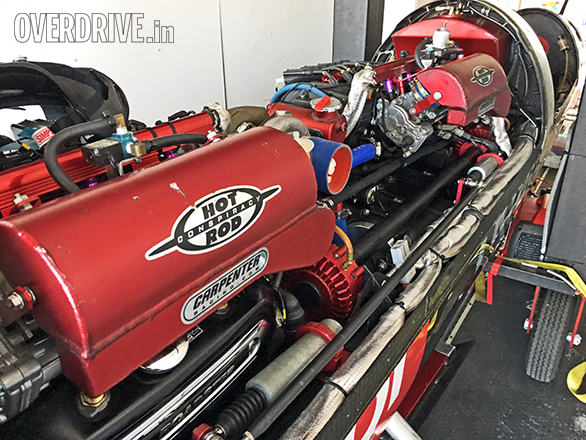 The Triumph Rocket Infor Streamliner uses two Triumph Rocket III engines for power. These engines were, in production form, too large in displacement for the rules. To meet the two-engine, 3,000cc cap, the team shortened the strokes to reduce displacement to 1,500cc each. Each engine gets its own turbocharger and is tuned to produce 500PS each. Triumph says the Rocket III engine was a good choice because the extraordinary torque of the production version means robust bottom-end components as well as a gearbox capable of handling high torque output.

How do two engines work together?

The two motors are always kept in sync. They run identical revs and gears - each uses its own gearbox as well. The two output shafts are linked by a secondary shaft that is directly connected by more cogs to each other. The drive is then run through a second 'gearbox'. This is a simple arrangement of two cogs that restores the shaft rotation direction needed to turn the wheel and then sends the torque down the final drive, a shaft with a bevel gear at the end, to the rear wheel. Triumph can alter the gearing in the second gearbox if needed, but the final two cogs are always in synchromesh and therefore not under rider control like the two motorcycle gearboxes are.

How does the rider control this? Guy Martin has a twistgrip throttle as usual which controls the power output. He also has up-and-down buttons for the gearbox as well as for the little display in front of him to go through information. Triumph tracks 32 individual parameters but this isn't live telemetry. Matt Markstaller explains, "Live telemetry isn't useful. There's nothing I can do during a run except for abort it. So we record all these channels and look at them later." Guy can also trigger the parachutes and retract the outrigger wheels (at about 25mph or 40kmph).

There's a small footbrake on the right foot. His hands do all the work. He controls the steering with two horizontally mounted joysticks that connect to the steering arms. It looks weird but is supposed to eventually feel as natural as a handlebar. The front wheel only has 2° of turning ability (along with the same degree of tilt) which is just enough for Martin to maintain stability. It's all carbon fibre?

Yes. Triumph is breaking new ground here with its all-carbon monocoque. The land speed record scene has been largely the preserve of small teams and individuals and that means home-baked, highly innovative machinery. In this scenario, the default safety solution is a robust, to-spec, roll-cage and a ladder-frame and body panels style vehicle.

Markstaller says that in a crash, these panels come off in the high speeds involved and cause many other safety issues. That and the structural advantages of the carbon-fibre frame are why the Streamliner is a carbon-fibre monocoque. The design was always intended to wrap the shape around the rider's and mechanical needs and that's what produced this rounded sleek shape, after 24 digital iterations of the original design. Naturally. The need is for an extremely stiff set-up in light of the speeds and consequently, the great forces involved. The Streamliner uses fully adjustable off-the-shelf Ohlins shocks at both ends. The front has three units and the rear has two. In testing, the team did say that backed off the suspension ratings a bit from what was originally planned. The Streamliner has carbon-ceramic brakes, but Markstaller clarifies that the pursuit of speed means other qualities, like cornering ability or braking, have to be sacrificed. So the brakes are there but they're gentle. Once Guy Martin crosses into Mile Seven, he will start by coasting for a small bit after which the shift lights will guide him into changing down for the best engine braking. He will use the brakes and rely on two parachutes to return to a standstill. 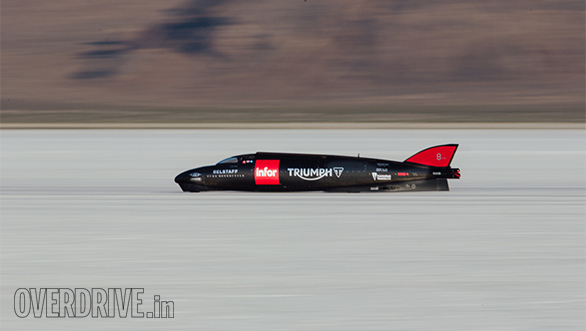 Given the nature of the salt surface - low traction - the Streamliner cannot accelerate very hard without extensive wheelspin. The rider will usually short shift at 6,000rpm in first and second gears and then go up to 9,000rpm in third, fourth and top gears. Redline is 9,500rpm but it isn't used for longevity and safety reasons. Given that there are five miles or 8km to reach record speed, the acceleration isn't as fierce as 650kmph suggests. Neither is braking.

Contrary to expectation, the Triumph Rocket Streamliner isn't a lightness at all cost style engineering project. It sits 40-60 in terms to front-to-rear weight distribution and weighs about 1,000kg. But many design solutions, like the heft of the engines or the steel rear wheel come from a need to put weight on the rear tyre and allow the torque to be transferred effectively to the salt.

The aerodynamics is the key 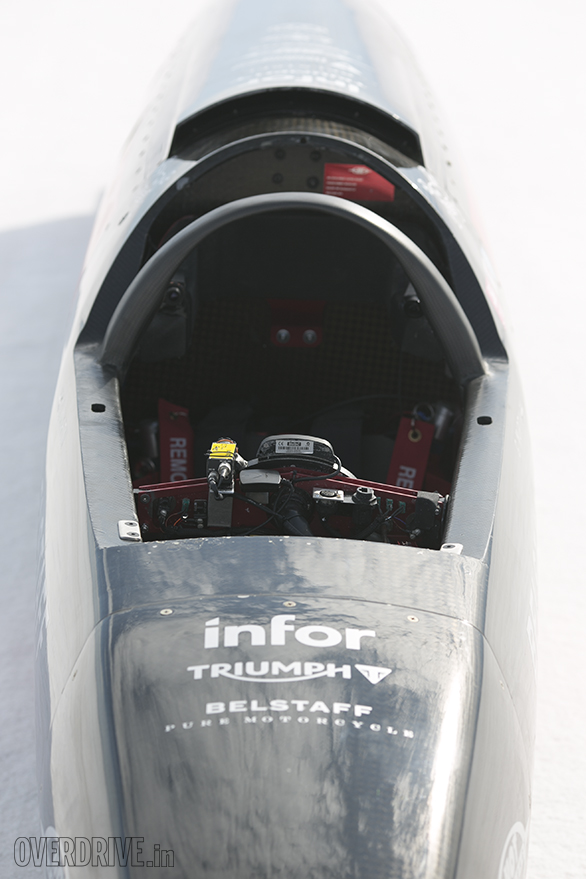 That's obvious, right? Not all of it. At these speeds - past 400kmph - the aerodynamics determines more of how the motorcycle behaves than the wheels. Which means they're of utmost importance.

What the Streamliner is designed for is stability. So at speed, it stays on course. Since the Streamliner is also an extremely long vehicle and therefore more susceptible to crosswinds. Again, the intention is to allow the bike to stay upright and not fall over. But the flip side is that they cannot make the Streamliner too stable. If it becomes stable to the point where the rider has no control over it, it will fall over.

The final point is that the aerodynamic requirement precludes a regular finned heat exchanger radiator. The Streamliner uses two internal radiators that use iced-water, refilled between runs, to keep the temperatures stable. There is also a water-injection system to keep the enormous exhausts and consequently the rider cool.

Then there is the rain

While the salt flats aren't an exceptionally rainy area, the last few days have had some rain and showers in the area. Today, two days before the planned record attempt, it rained again even as the track was declared to be, "drying but not dry enough for test runs yet". Everyone is hoping the salt dries enough for the runs to get done without a hitch. All the best Triumph and Guy Martin! 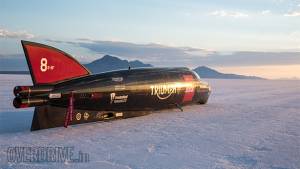 Video: Everything you need to know about the... 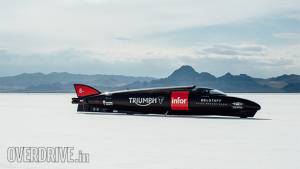