Making of the all-new Hyundai Verna

Four months. More than 30,000 bookings. 20,000 units delivered. These aren't just random numbers. They are testament of a product's success, which to this date, has been unprecedented. The all-new Hyundai Verna has smashed records and risen to the top of its segment. This, within a couple of months of its launch in August 2017. The Verna has rewritten the rule book for mid-size sedans and set a pretty high benchmark, one that's surely going be a tall order for the competition to achieve.

How did Hyundai manage to do this? What makes the Verna so special? Why has the car struck a chord with the Indian buyer? With these questions lingering in our head, we went to the Hyundai factory on the outskirts of Chennai to watch the making of one of Hyundai's most successful products. 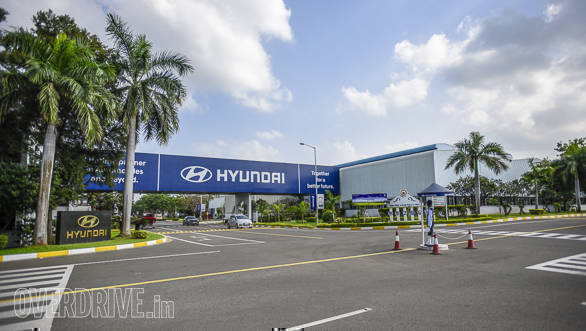 The Hyundai factory is located at Irungattukottai in Tamil Nadu, and is the sole manufacturing facility in the country. That's the reason why the factory has a fully integrated set-up. This means, everything from the engine to the body, to the assembly takes place at the factory. The Hyundai Motor India plant is the third largest Hyundai factory in the world and has the capacity to produce over 6 lakh units annually. Of this, a third of the cars are exported. 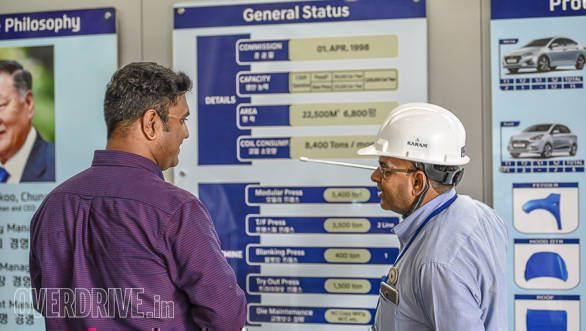 The entire factory is spread over 530 acres, of which 40 per cent is utilised to park cars that are ready to be transported to the dealership. The factory is divided into two phases - Plant 1 and Plant 2, each with a dedicated setup for a specific platform and type of car. Plant 1 was set up in 1997 and that's where Hyundai's previous success stories, the Santro, Santro Xing and Accent were produced. Currently, Plant 1 produces vehicles such as the Creta, Elantra and Tucson. In all, the plant produces 6 models. Plant 2 produces the Grand i10, Xcent, Elite i20 and the new Verna. The Elite i20 is also produced in Plant 1. Both plants have five, common manufacturing processes. These are Press, Body, Paint, Engine and Final Assembly. 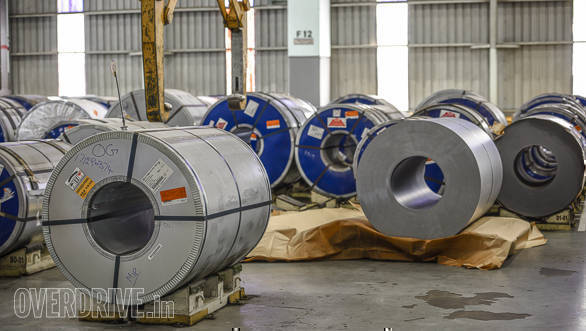 Our day began at the Press Shop, where the chief supervisor, Mr Rao took us through the various processes- Blanking, Stamping and finally panel storage. Huge coils of steel, shipped from Hyundai's Steel manufacturing plants outside India are brought into the Press shop. In the blanking stage, these steel rolls are uncoiled and cut to size after being washed thoroughly. From here, these blank sheets of steel are carried over to the stamping area. 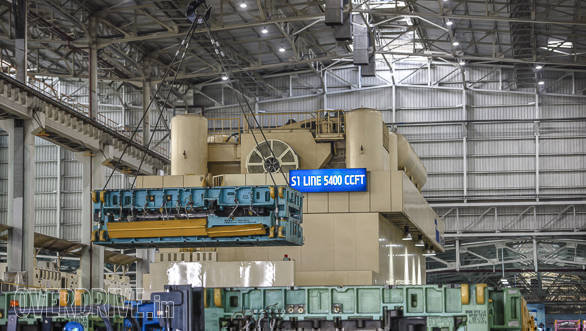 Depending on the production plan for the day, a specific die is selected and loaded onto the stamping machine. So, for example, at a given point, the machine stamps the right front door of the Verna. We could see a series of such doors being stamped out of bare sheet metal, in a matter of few seconds. After the stamping process, one out of 50 body panels are checked for quality compliance before being stacked in the storage area. 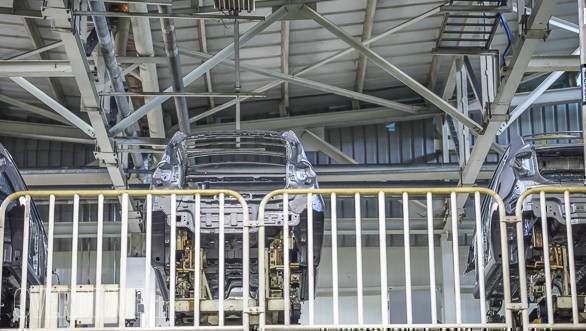 .
From the Press shop, these body panels are transferred to the Body shop where they are fused together to form the body of the car. There are multitude of conveyor belts that carry various body parts such as the door subframe, car floor, roof into the robotic assembly area. This is where the perfectly synchronised robotic arms work their magic, spot welding the car together. 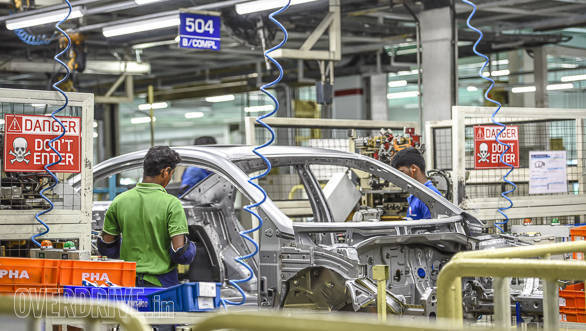 It was quite fascinating to see how these machines perform the intricate process of putting the body together. Once the body panels are put togeher, they pass through a series of light tunnels where quality teams inspect the body panels for any anomalies. The shell moves on to Paint, which was out of bounds to us. 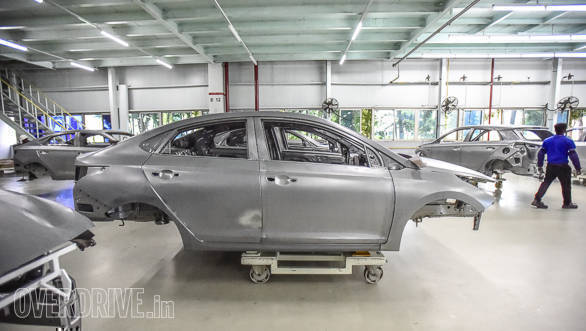 We were told that the entire body is dipped into a huge bath, which contains a solution that coats the body panels with an anti-corrosive element. After this, each panel is painted, with the seventh application forming the final coat. 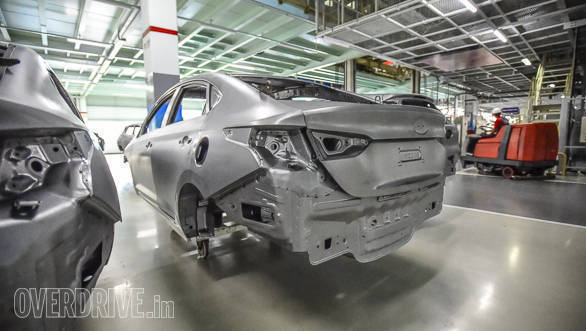 While all of this is going on, the engine department busy is at work, putting together the powerful 1.6-litre petrol and 1.6-litre diesel motor that's available in the new Verna. The workers then attach the transmission and exhaust system, forming the drivetrain. 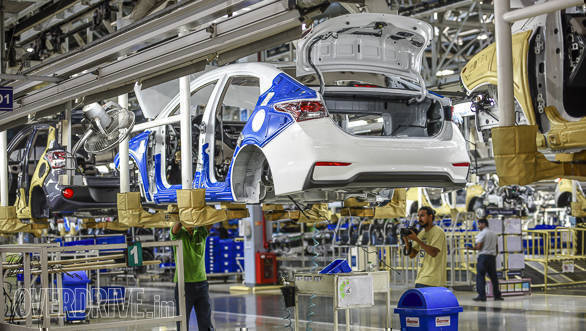 At the Final Assembly stage, the painted body panels enter the assembly line. Here's where the doors are detached and carried via a separate conveyor to the end of the assembly line. This is done so that fitting the Verna's seat, dashboard and electrical harnesses becomes easier.
About 90 per cent of the human work force is present on the assembly line. All around, we could see parts moving in an orderly fashion. An expansive conveyor system moves the car body to the assembly line where humans begin to attach the lights, fill in the fluids, fix the seat and dashboard. As the car moves down the assembly line there is a point where it meets it's drivetrain. 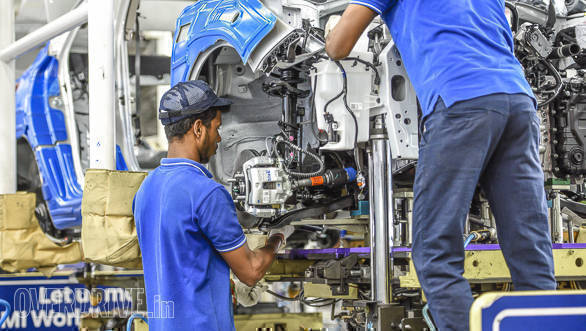 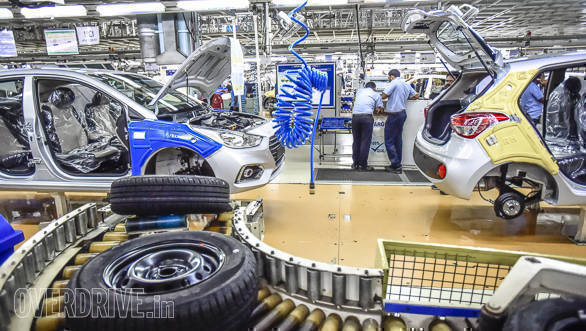 This section is called 'Chassis Marriage'. A platform on rails carries the drivetrain which is then attached to the cars body by the workers. All what's left now is to reattach the doors and fit the wheels. Just before the car rolls off the assembly line the workers perform final inspections where they ensure all panels are aligned and the paint shade is even. Another set of workers also ensure the interior trim is secured properly and all lights are functional. 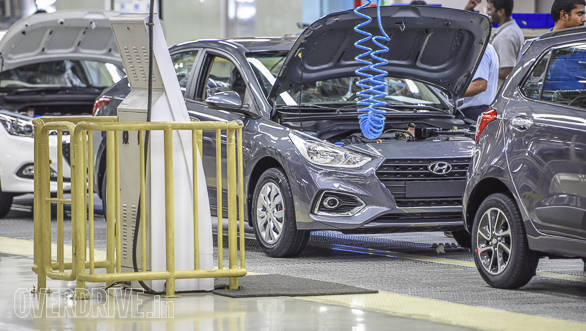 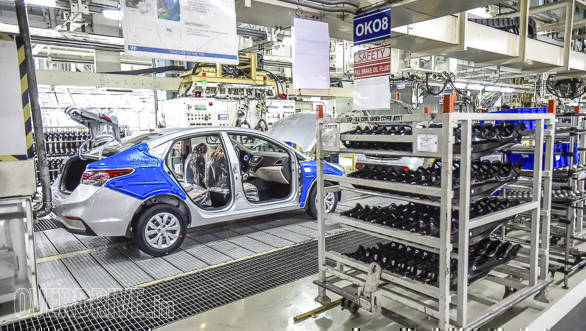 The Verna is fired up at the end of the assembly line, for the first time, and driven to the wheel alignment and balancing section. After this, a shower test is performed to check for any leakages. Each car is then hooked to a test rig and driven around the test track to ensure that the car performs as per desired standards. After the car is passed by the test driver, it is readied for transport to the dealerships. 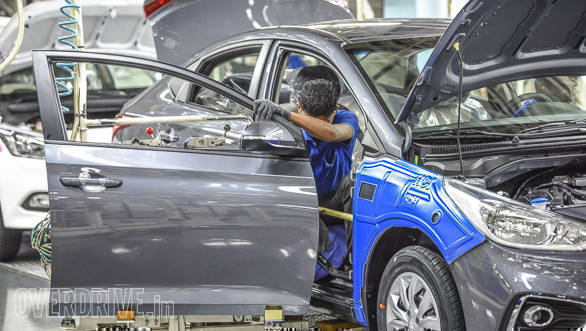 Throught the entire process of building the Verna we noticed how at each stage Hyundai has ensured that quality is never compromised. The mere fact that cars for both domestic and international markets are put together in the same assembly line, at the same time shows that Hyundai builds cars to the same exacting standards for all markets.The Hyundai Verna, or the Accent as it's called in the International markets, is the exact same car. 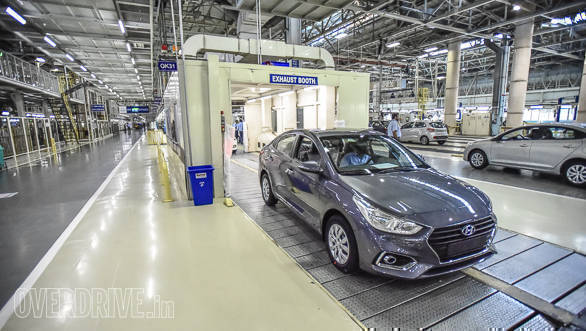 It's no wonder then that Verna has received such a warm welcome. The design, long list of features, powerpacked engines and top notch quality has made it a resounding success. It's not surprising then, that the new Hyundai Verna has bagged the prestigious 2018 Indian Car of the Year award. 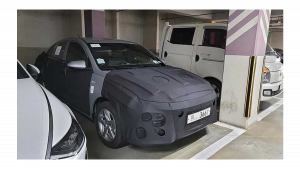