All good stories begin with a stolen car. This one does too. The theft has been carried out by a youth of no more than 10. The destination? The empty field behind the houses in the neighborhood  The time frame during which the theft was carried out? The span during which the parents were away and the rugrats could play. The partner in crime - the best friend. 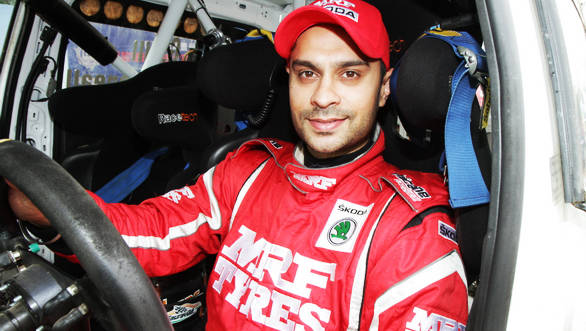 2013 Asia Pacific Rally Champion, Gaurav Gill is all set to defend his title

Indeed, it seemed like the perfect crime. Except for one (well, two really) minor detail - the rapid rate at which the needle on the fuel gauge moved towards empty. And the miles racked up on the odometer.

"As a 10 year old I didn't think of those things," laughs Gaurav Gill when he recollects the first time he managed to get a grip on a steering wheel and then got caught for it. It was at a time when his feet barely reached the pedals and peering over the dashboard was a challenge. For the very young Gill, though, this childhood truantry would shape the rest of his life. It all began when his friend Rishi Choudhry, who though barely older than Gaurav, had access to his family's cars, and was allowed to drive them in the empty ground near where they lived. And given that he had enough faith in little Gill to entrust him with his own car, Gaurav soon learnt how to drive. Then it was just a matter of waiting for the opportune moment. The time when his parents would leave the house and a set of shiny car keys were his for the stealing. Of course, by the time his misdemeanour had been found out, Gill was so proficient at driving that his mother allowed him the privilege of using her car when she was around. So, by the time he was 13 years old he was drifting, at 15 he was going sideways properly, and at 16 he turned pro at his first competitive event - an Autocross in Chandigarh.

"My uncle's friend loaned me his girlfriend's car for the event," Gill recalls with a chuckle. It was a Maruti Esteem with bald tyres no less, which didn't seem to matter once Gill was strapped into the driver's seat. He flew through the event and set the fastest time along the way. The only reason he didn't win was because he was given a penalty for touching a cone on the course. Victory ultimately went to the then fastest man in the country - Nikhill Taneja. And when the INRC star went up on stage to collect his trophy, he called a very thrilled Gill up onto the stage and handed him the trophy instead. It really was a sign of things to come - of the sideways baton being passed from one yumping generation to another. "He was phenomenally fast," Taneja remembers, "And I really thought he deserved the trophy."

There was, perhaps, another reason that rallying came so naturally to Gill - his uncle was the famous Upkar 'Dicky' Gill. That very same man who back in the day rallied a Swaraj Mazda in the old Himalayan Rally. "It was natural progression for me to take to the sport having grown up watching my uncle rally," Gill says. Although at that point in his youth he had already taken up tennis professionally. But seeing how good he was at rallying - the flair and passion were both inherent - making the choice was simple. In his own words he "threw down the racquet for the steering wheel." 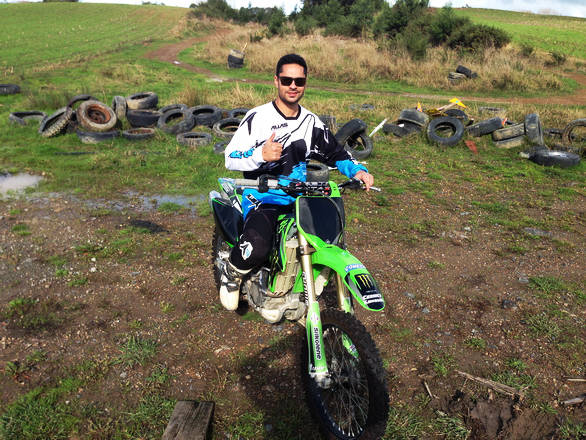 Gill's had plenty of experience on two wheels too

There was just one problem with the fact that he wanted to rally professionally. At 16, Gill was still two years shy of getting his driver's licence, and thus two whole years away from a competitive rally seat. Not one to sit around and wait for rallying to happen, Gill got astride a motorcycle and took to participating in Motocross events around the country. Something he continued with considerable success until a nasty accident made him give it up for good in 2005. But even his choice of Motocross as a sport is telltale of the type of motorsport he had already gravitated towards. "For me motorsport always has something to do with gravel," he declares "either on two wheels or four."

There was a period of time during which he had to settle for tarmac, though. Just plain tarmac. And for someone who wasn't that keen on racing cars, Gill's had a rather successful stint in them. Back in 2003 he remembers his first experience racing in the South. "I think I was the only person from the north of the country who was competing in the races that year," he says of his first tryst with the Formula Maruti cars. It was a different environment altogether, in terms of people, terrain and machines. "There was a lot to learn," he recalls of his formative years in racing. "The cars weren't that easy to drive, they lacked grip, and it was really all about learning to control them." Something that he managed quite well, given that the next year he claimed the Formula Maruti Championship. In the meanwhile, Gaurav managed to pick up a leg injury, which meant that he was out of action for most of the 2005 season. But in 2006, the first year that India got a proper slicks and wings car in the form of the Formula Rolon, he was back and how - winning the 2006 National Racing Championship. But at the end of the day, even with national racing titles under his belt, what's really evident is that you can put a rally driver on a racetrack, but you certainly can't beat the rallying out of him. "I liked racing, but not as much as I liked rallying. At the end of the day, it's going round and round in circles," Gill says. 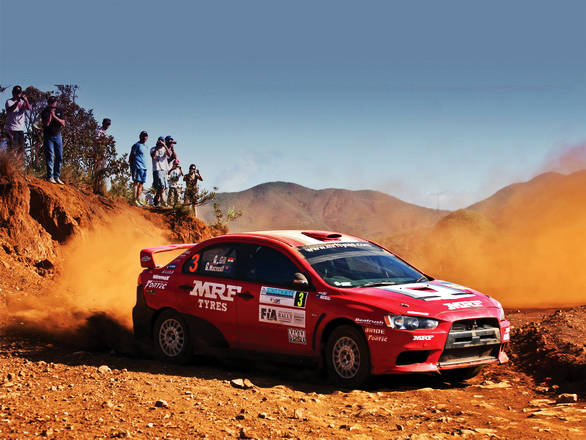 "It was very hard racing, very close racing, with lots of tough battles. But at the end it was also clean racing," says multiple national karting and racing champion Rayomand Banajee of the time he jousted for track position with Gaurav Gill. And it was the fact that Gill always raced fair that gave his rivals like Rayo the confidence to go out there and race aggressively against him. Banajee also partnered Rayo in the Auto Gymkhana in Taiwan in 2006, where they finished second overall in the team event. "Even back then, Gill had the car control to be up there with the best of them. And the other guys had been racing in those events for a good 15 years," Rayo recalls. 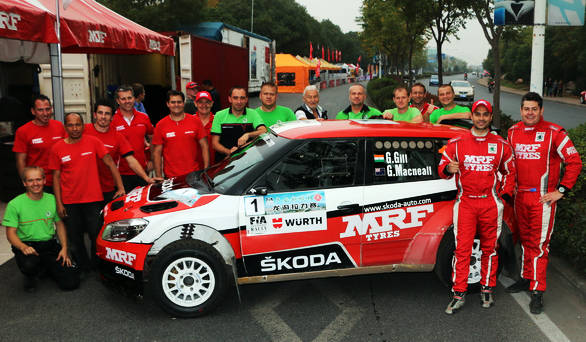 Now it is 2014. It's been a good 14 years since Gill was put through that rather gruelling and exhaustive test for a seat in the JK Tyre Rally Team. He'd been spotted by the company's motorsport boss, Sanjay Sharma and given the chance to try out for the Yellows. In January 2000, Gill was put through his paces under the eagle eye of three-time APRC champion and 2002 PWRC champion Karamjit Singh. That he was fast was never really in doubt, and with Singh's approval, Gill was inducted into the squad where he would remain for the next six years. 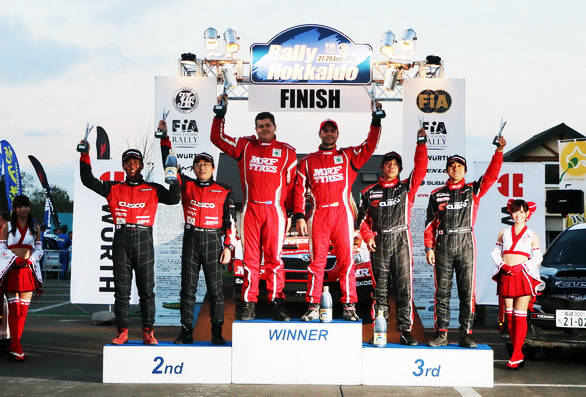 Winning the Rally Hokkaido that aided him to the championship win

The big change in Gill's career, though, was when he turned Red. After two years of rallying nationally, 2007 was when the big leap was made with Gill switching to the Asia Pacific Rally Championship. It was there that he'd start to mature as a driver. The learning curve in the APRC was steep. First there were a string of DNFs. But even then, in that first full year of international rallying, there was that win in Indonesia that signalled the throwing down of the proverbial gauntlet. Gill really was in it to win it. But like he says, with rallying, it takes years of experience to gain an understanding of exactly how things function - changing soil conditions, the difference in stages overnight and the drastically different terrain. Gill, over the years, has transformed from being a driver with the reputation of a heavy right foot, to a driver with a judicious use of the accelerator. Even back in 2008 after rallying with him twice, the highly experienced Jagdev Singh had described him as "the real deal". Well, he's proved it alright, winning the Asia Pacific Rally Championship with the Team MRF Skoda in 2013.

And now Gill heads back to the rough stages of the APRC in order to defend his title. "There's no extra pressure on me," he says calmly. "I'm a professional and I'm expected to do well, and I need to defend my title," Gill says. "Not just for me, but for my team too." And it's something the Reds will be happy about - the championship win with Gill had been seven years in the making. 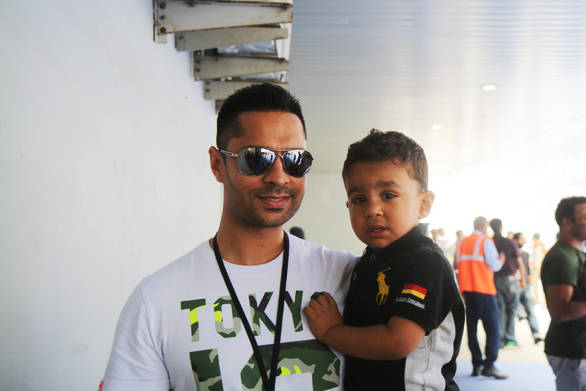 Gill and little Gill spotted at the Buddh International Circuit - they really believe in starting out young!

Like any rally driver worth his yumps, though, Gill, even while rallying the SuperXUV in the 2014 Indian Rally Championship and the Fabia in the APRC, has his sights firmly set on the WRC. He's had some experience rallying in Europe, even having scored points in the PWRC in 2009. But a full season in rallying's highest echelon is what Gill is hoping for. Sooner rather than later. "We have some former WRC drivers in the APRC now, and I'm able to match their speed. So we're confident of what we can do," Gill says. Now to go do it, then. And this time around we hope he won't have to wait to find a set of car keys that are left unattended.