Kerala, with its backwaters and a network of interconnected canals and lakes that run parallel to the Arabian Sea stretching from end to end, spells haven for those who like to soak in the placid solitude of the waters in a houseboat. The real thrill for me, however were the tiny, natural islands in the backwaters of Chettuva. Two of these belong to the Rajah Group, a family that loves automobiles and has quite a few passionate rally enthusiasts in its fold; in fact Abdul Zuhin, CEO of the Rajah group is a professional rally driver and has even claimed the 2012 Indian Rally Championship. 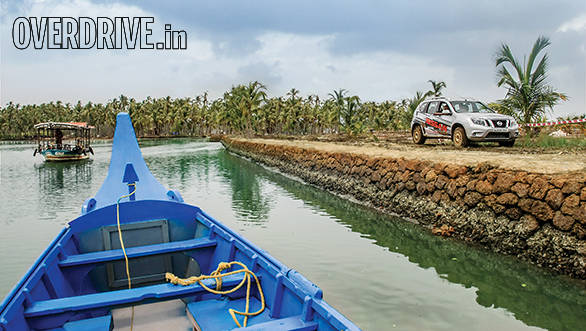 The first island that belongs to the Rajah Group was converted into an Ayurveda resort but the second island was left unoccupied until Zuhin decided to dedicate it to motorsport. In his first attempt, he has created a special autocross track that runs around the island. This is probably the only island of its kind and we are one of the first lucky ones to drive around this very special stage. The 1.2km dirt track is quite technical and features 22 turns and a 200m straight inclusive of a jump that can get all four wheels of a rally car in the air. The track is quite narrow but this makes it all the more challenging especially if one is driving a slightly larger rally car like a Mitsubishi Cedia or a Lancer Evolution.

An autocross is a timed competition that involves drivers negotiating the course one at a time and racing the clock rather than other cars. This makes the island dirt track perfect as a stepping stone for those looking to move into a more competitive form of racing such as rallying. After I drove around the track, the island hosted the first ever Rajah Island Rally Sprint organized by IMSC responsible for motorsport events across the country spearheaded by ace rally navigators Musa Sherif and Ashwin Naik. 57 competitors from around the country were invited to take part in this unique event. Various rally and road cars were used and autocross champions found that the track demanded exceptional rally prowess. The event attracted throngs from the mainland, who arrived all the way to the island in boats. In fact even the cars, ambulance and other rally equipment were ferried to the island despite the challenges faced during low tide. 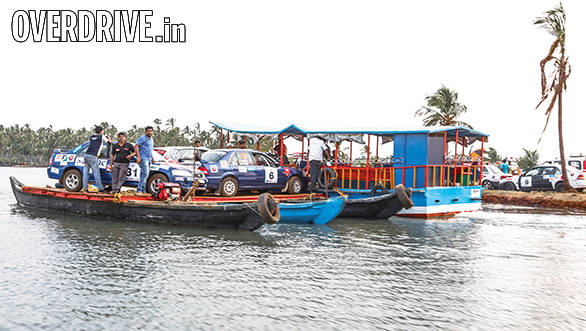 The cars and other rally equipment were ferried to the island

Rally drivers, Suhem Kabir and Dhruva Chandrasekhar, both driving specially prepared Honda City autocross cars fought for top spot, and in the end it was Suhem who managed to post a quicker time. However, 2013 APRC Champion Gaurav Gill's entry later surprised the crowd. He drove a rally-spec Mitsubishi Lancer Evolution X to its limit. Despite the track being narrow for the car, Gill attacked the course mostly sideways and ended up beating the lap record by almost 10 seconds. He too observed that the course was very technical and narrow but racing around an island made the whole affair very thrilling. Suhem Kabir was impressive in the Honda City

The Rajah Group is going to further develop this track to help nurture talent and hopes to host yet another motorsport event next year. We'll be there to fill you in on that one.