In their shoes: Riding the Sherco TVS Rally bikes in the Sahara Desert

Trepidation. I guess that's the feeling I've got as I mount the big Sherco dirt bike. In my mind, I think I've made the right choice. Of the four bikes that the Sherco TVS Factory Rally team has lined up, I chose the one with the smallest capacity. It seemed the least intimidating of the lot, at least on paper. Besides, my absolute lack of experience in riding a motorcycle off road made me opt for a beginner level motorcycle. I was so wrong. Barely a few meters out of the tent, the moment I hit the first mound of sand, I stalled the bike and almost fell off. My heartbeat shot up to the next level, as I struggled to find a secure footing and keep the bike upright. Beads of sweat kept rolling down my forehead. At that moment, I thought to myself, "Why did I sign up this?" But before I go any further, let's just back this truck up, shall we? 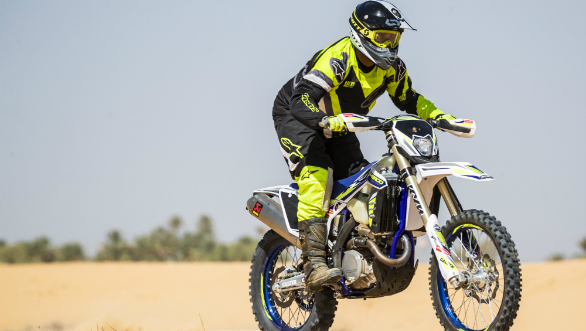 TVS Racing has been spreading its wings by participating in international rallies, including the Dakar. In order to showcase how far they've come, the company flew me and a few other fellow journalists to Morocco, to witness the 2018 Rallye Du Maroc. It was quite a surreal experience to see top-level rallyists blaze past on their 450 Dakar motorcycles. Even the riders in the Enduro class were no less spectacular to watch. They actually made riding off-road appear easy. I mean, how difficult can it be, right? Just stand on the bike and stay on the throttle. 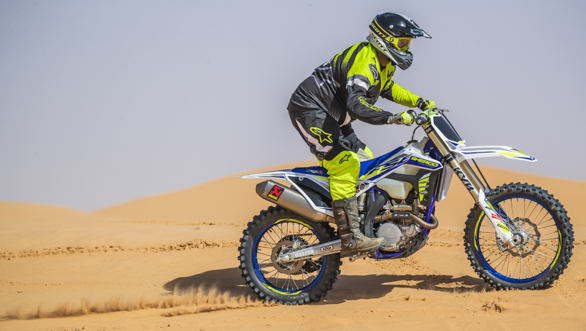 Cut to two days later, at the ride experience that TVS and Sherco had set up in Merzouga, I was atop a small sand dune in the Sahara Desert, tired and wondering if I'm going to manage a day of riding in the desert.

Remember the bike I'd chosen in the beginning, The Sherco 300 FSF? As I figured later, it was a proper dirt bike that required more than an average skill set to get the best out of. Its short gearing meant that it was overeager to shoot into the distance, like a Rottweiler that has fixed its eyes on a target. To compound matters, riding on loose sand isn't a good feeling, at least for a first-timer like me. 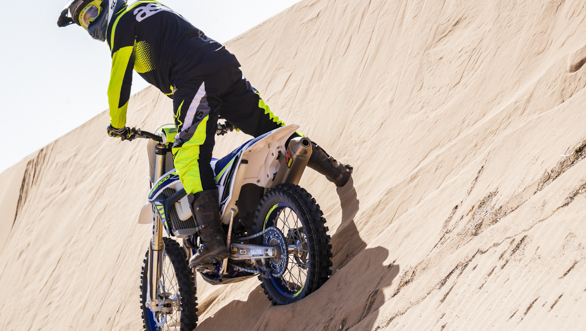 Help! I look for a way out after stalling the 300 on the steep end of a sand dune

The sense of traction is limited and the bike sort of wiggles underneath you. The handlebar also seems to have a mind of its own, as I struggled to keep it pointed in the direction I intended. My hands and wrists were in pain as I was literally hanging on. After a couple of instances of stalling the bike, the French instructor stopped to check on me. I responded to his thumbs up gesture to say that I'm fine. "I wasn't, but what if I say I'm not and they stop me from riding any further?" Somehow, I gather myself and finish the first of the four 20-minute sessions for the day. Dehydrated, confused and worried, I headed back into the tent to calm my nerves. 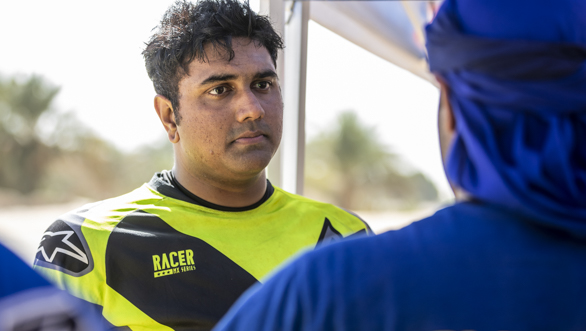 Abdul Tanveer Wahid, TVS Racing's star rider, who finished second in the Enduro class at the Rallye du Maroc, probably understood what I was going through and came to my aid. I was given tips about the correct body position on the bike. The trick is to let yourself loose and keep fear out of your mind, he says. The correct way to ride these bikes is to hold the bike with your legs and knees and keep the upper body as free as possible. That meant holding onto the handlebar with a firm grip, yet loose enough for it to do its thing. Also, I was advised to trust the bike and the tyres. "Don't think so much. Ride the bike. Just go out and enjoy," were Abdul's words before I set out for the next session. 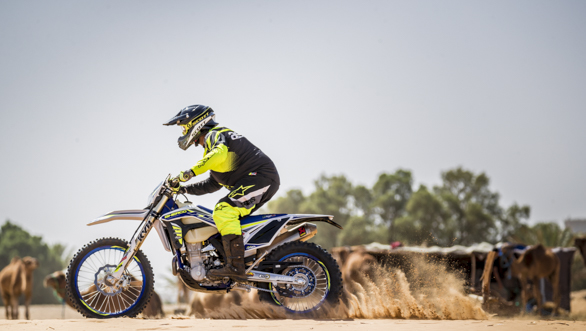 This time, I hopped on the Sherco 450 Enduro and immediately fell in love with it. The power delivery was easy and not as frantic as the 300. This allowed me to concentrate on throttle inputs. The longer swingarm also translated to a stable feeling on the bike. Soon, I was able to pick up the pace as we began climbing higher dunes. The technique of keeping your feet anchored and letting the upper body free allowed me to pivot back and forth with ease. This, as I began to figure, was paramount to ride the dunes. For instance, riding down the steep face of a dune required me to lean back, shift my weight over the rear tyre and stay on the throttle. The trainers also kept emphasising on keeping the throttle open to maintain momentum on the sand, at all times. 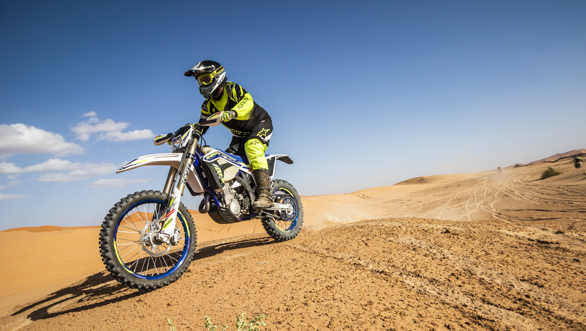 By now, my faith in the motorcycle had grown tenfold and I was finally enjoying my time on an off-road motorcycle. Something that I didn't think would happen. In fact, I was so chuffed with the progress I'd made, I got onto the Sherco 450 Rally bike, beaming with confidence. But then, I was reminded of the years of training that the riders undergo to get to the stage they are at.

The trainers took us further into the desert, for the third session, and we had to climb even higher dunes. Going up one such dune, I had a moment when the handlebar went into a nasty tank slapper (a movement where the handlebar swings left to right uncontrollably). My reflex was to grab the brakes and come to a standstill. Phew, I said to myself and carried on, my confidence taking a small dent. In hindsight, I should have taken it easy from then on, but I was so determined to learn, I didn't pay heed to the one rule of riding the dunes - you never know what's on the other side. On one such dune, I went up the incline, all guns blazing. It's only when I reached the crest that I noticed a four feet vertical drop to the other side of the dune. Ideally, I should have whacked the throttle open and shifted my weight to the rear but I panicked. I chopped the throttle and took my foot off the pegs to try to land on my feet. Big mistake! Next thing I knew, I fell on my left side, with the bike buried in the sand below me. Thankfully, the bike was okay and the protective gear did a fine job of ensuring I was unharmed. 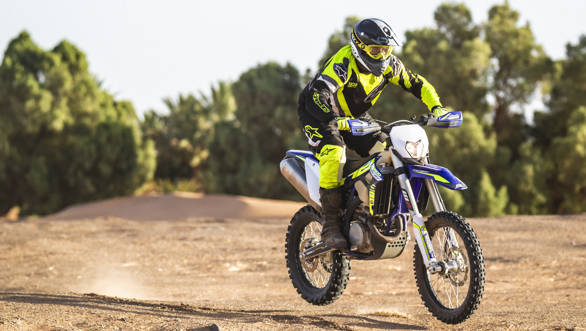 Ironically, falling off the bike did manage to alleviate my fears, to some extent. Maybe it has to do with the fact that I felt what it's like when you come off the bike. Probably that's why, during the final session of the day, I was having a whale of a time astride the Sherco 450 Enduro, a bike I simply can't get over. Power slides, full bore acceleration, jumping over mounds of sand. I never knew riding off-road can be immense fun. It taught me a thing or two about having faith. In yourself and the motorcycle. It taught me to not give up and look forward to the challenge. But more importantly, it made me respect the professional riders even more than I already do. 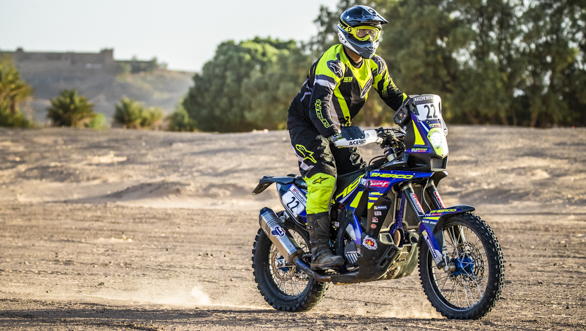 Just to give us an idea, TVS Racing allowed each one of us to ride Harith Noah's Dakar bike, albeit for a few hundred meters. But it was enough to give us a sense of what it must be like to ride these big and heavy machines. They are not only intimidating to look at, but also to ride. It was for me at least. And then, when you see the professionals ride the Dakar bike, they make it look like child's play. 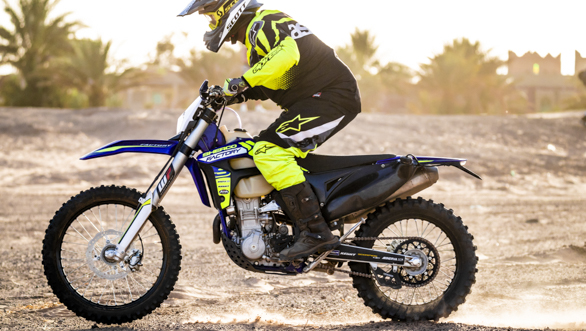 A day of dune bashing had left me absolutely knackered. I'm nowhere near as fit as the rally guys and neither is my skill level up there. And come to think of it, I was astride relatively light motorcycles. It makes me stand in awe, when I look at these riders ride flat out during rally stages. Consider the pressure of setting the fastest time for a stage, while looking at the navigation roadbook scroll, and keeping an eye out for obstacles that could throw one off the bike. The life of a rally rider is extremely dangerous. 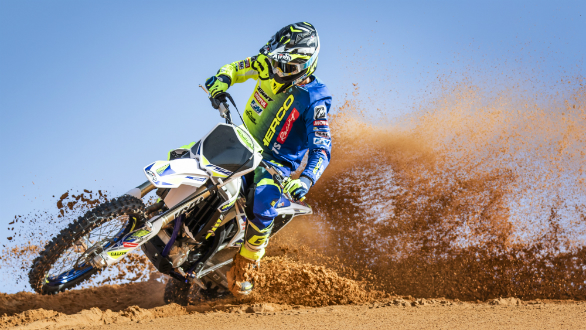 What we experienced, stepping in their shoes, was not even one per cent of it. I have nothing but immense respect for those who participate in what can only be termed as the ultimate test of human will and endurance.'