It doesn't matter how many times I have traveled to Jodhpur for media drives and launches as the sand draped destination has always been a pleasure to be in. The distinct architecture, local cuisines and simple people are the highlights of this small but busy city. So when Honda invited us to be a part of the Drive to Discover, I was more than happy. 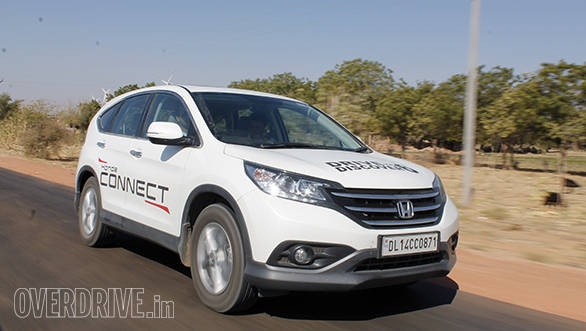 The route chosen for the sixth edition of this drive was from Jodhpur to Jaisalmer. This was a mix of single lane routes and smooth well paved highways. The weather, in particular, was on our side  thanks to which, driving for long hours was no problem. Except for the chilly drop in temperatures at night, that discouraged us from venturing out without our favourite Christmas sweaters (Deadpool wears them in the movie so be cool, okay!). 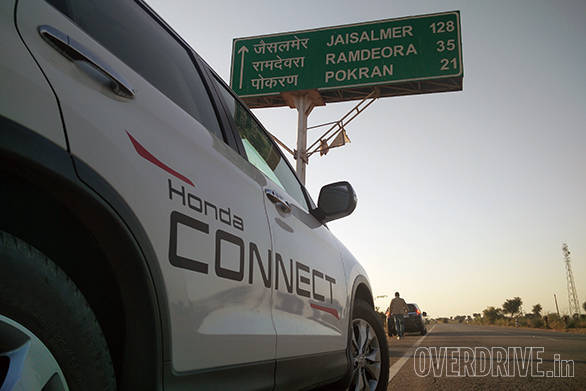 The Honda CR-V, City and the Jazz were the cars at our disposal. They also came equipped with the new 'Honda Connect' mobile application. This app helps book a periodic service, send emergency messages, locate dealers and fuel stations in the proximity, send out reminders for insurance and PUC renewal, maintain a fuel log, activate impact alert, track car location, calculate trip details and also monitor the car's condition.

The day started with a late breakfast at the Taj Vivanta in Jodhpur. Our ride for this trip was the Honda CR-V. Following the itinerary, we headed from Jodhpur to Jaisalmer. Soon after dodging moderate city traffic, we were driving on National Highway 114. This 285km stretch is a single-lane highway, making it difficult to overtake other slow moving vehicles on the road. Also, the road had a lot of undulations making our CR-V pitch and yaw like a boat. The delayed response from the CR-V's automatic unit further added to our woes. The gasoline motor takes its own sweet time to build momentum. But once it reaches triple digit speeds, cruising becomes effortless. 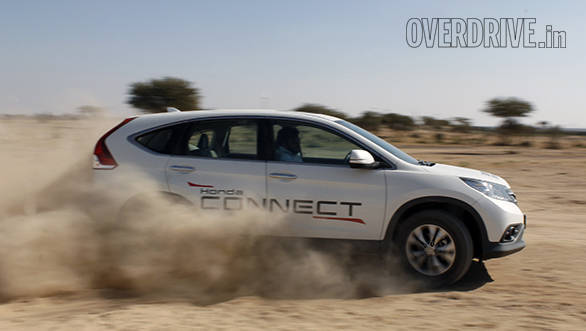 We had a quick pit-stop at Manvar Resort and Desert camp, set on NH114 between Jodhpur and Jaisalmer in the Thar desert. Here we ordered local delicacies such as lal mas and chicken curry. We were quite famished and thus attended to our hunger eagerly after which, there was a driver switch and we continued towards our destination. 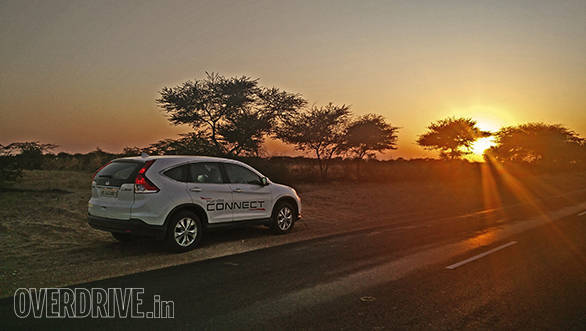 We covered milestones and more road as we watched the sun go down, painting the sky a deep amber. You could see the slight exhaustion in our eyes but the sight of a tall, well lit landmark looming ahead in the dark was reassuring.  This was going to be our stopover for the night - The Gateway, Jaisalmer..

Day 2: A war museum and a haunted village

The second day was more eventful as we visited multiple places. We began with the Jaisalmer War Museum. Located close to Jaisalmer on the Jaisalmer-Jodhpur highway, this museum displays war mementos and also showcases the transformation of the Indian army from the early years to the current era. We walked through the gallery glossing over the descriptions of notable episodes in the war history of India. The soldiers who fought, the uniforms they wore, the vehicles they drove (special attention to that) and every other possible information around each era is detailed in those write-ups. The museum also houses some of the famous tanks used in wars, like the gasoline powered 400PS one which proved its mettle in the Battle of Laungewala. In fact, there is an entire hall dedicated to the historical battle which took place during the 1971 war. 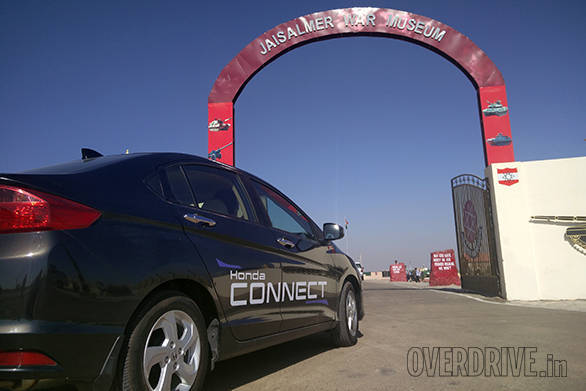 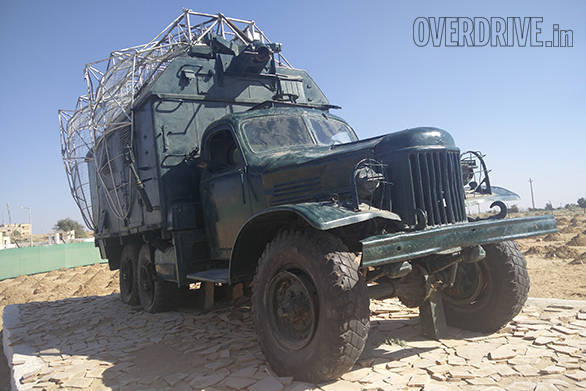 After our stop at the museum, it was time to hit the road again and this time the destination was the dreary Sam dunes, which was listed as a must-visit. It is only when you see the dunes for real that you understand the magnanimity of the Thar Desert. Visitors have an option of riding on camel-back or driving through them on Mahindra. . . wait for it. . .  Thars   of course, we chose the latter. If only the CR-Vs could off-road like other SUVs are supposed to. Unfortunately, the Thars are anything but comfortable. We had to stand on the rear bay, holding on to the roll-over bar for dear life while the Thar climbed and crawled over impossible mounds of sand, deep sections and steep climbs. We reached a base camp which was a temporary relief from the discomfort of the sand ride. 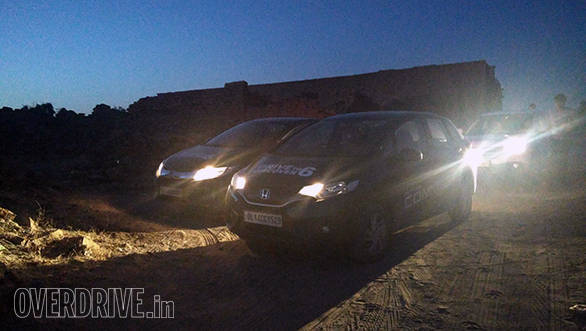 As if riding tall waves of sand wasn't adventurous enough for us, we bravely continued to follow the itinerary to the next destination. The only change was that this time we weren't screaming or bawling as large groups like ours are wont to do, but were taking in the sights in silence. The Kuldhara village is known to be a haunted site. It is said that the Paliwal Brahmins who inhabited it vanished overnight over 200 years ago, leaving a ghost trail behind. Legend has it that Salim Singh, the minister of state, fell for a girl belonging to the Brahmin clan. He threatened to levy huge taxes if he was not allowed to marry this girl. To protect the girl and their possessions, the residents of the 84 adjoining villages abandoned the area overnight making it an exodus. To this day, the locals refrain from venturing into the village as they believe that its ancient inhabitants had a curse on anyone who enters it. It is only the ruins of the broken village that live to tell the tale. 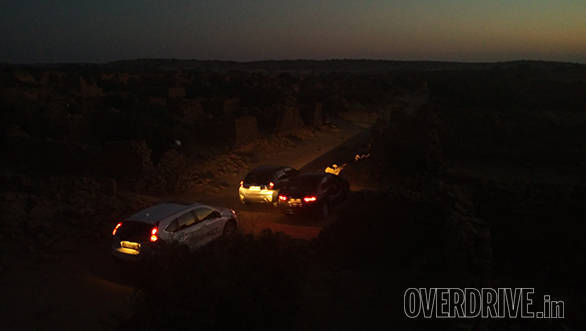 We entered the haunted premises and were skeptical of stepping outside our vehicles. There were broken walls, incomplete houses and heaps of stones lying everywhere. The silence of the surroundings was spooky. We climbed onto a terrace of one such house only to see the remains of civilisation scattered across the vast expanse. It was sunset and beginning to get really dark. And cold. We wisely got back inside our cars and departed quickly  Deadpool sweaters and all.

This was the final day when we headed back to Jodhpur and the route chosen for this journey went through Barmer. Again the roads weren't anything to write home about as they were narrow and single laned with large crater-like potholes. For most of the journey, we drove the Honda CR-V. While it isn't particularly known for its off-roading capabilities, the Honda CR-V did manage to swallow uneven patches and sudden ditches with great ease. The automatic version is good only if you want to tackle city traffic but if you really want to feel the motor taking the tarmac, it is the manual version that you should opt for. 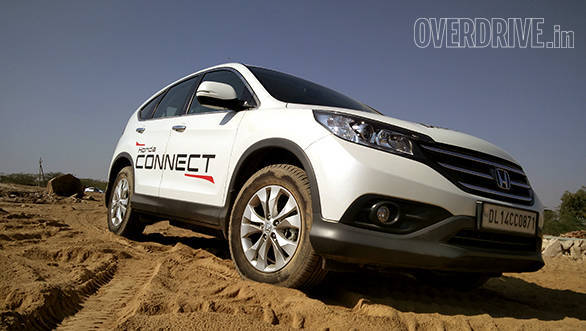 The feeling of getting lost in the dreary desert, unplugged and off the radar, was just what I needed. I really enjoyed living disconnected for a while with the vast Rajasthani landscape for a backdrop. This edition of Drive to Discover then proved to be a great way of mapping Rajasthan. But I'll be back for more of this  in a Jazz, maybe? 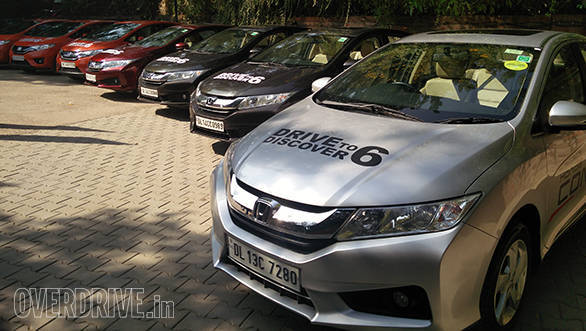 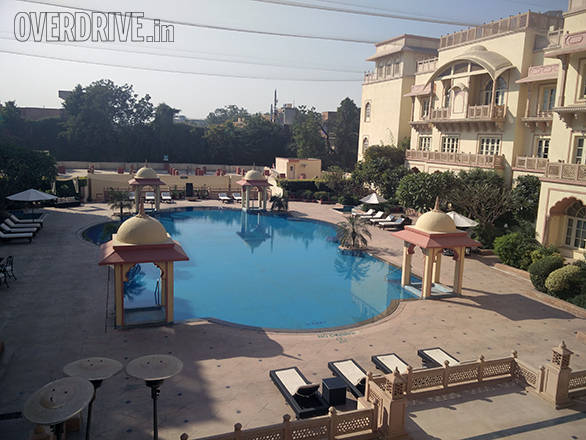 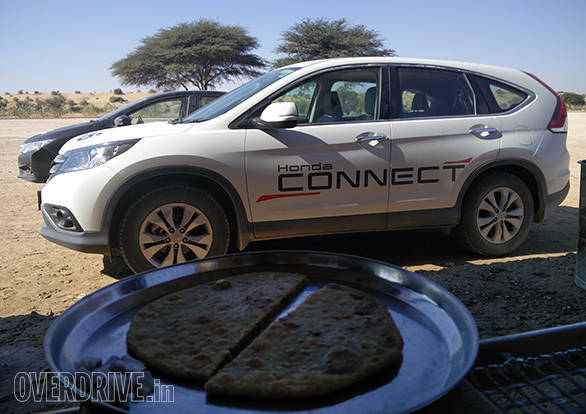 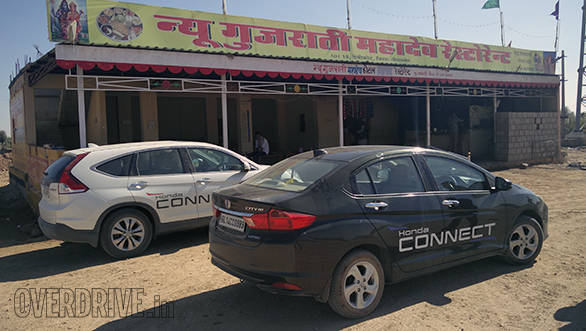 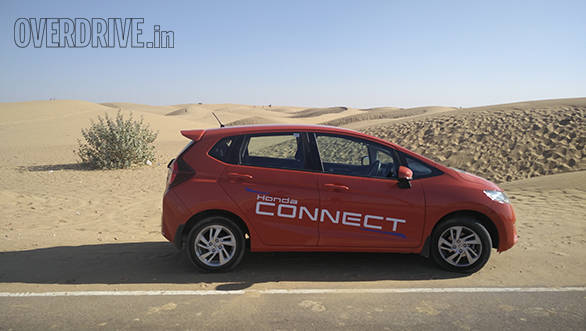 The Honda could only pose before the legendary Thar desert 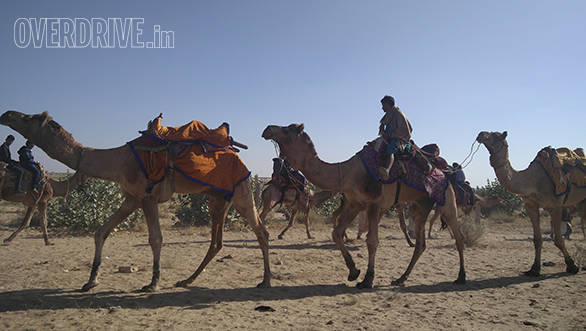 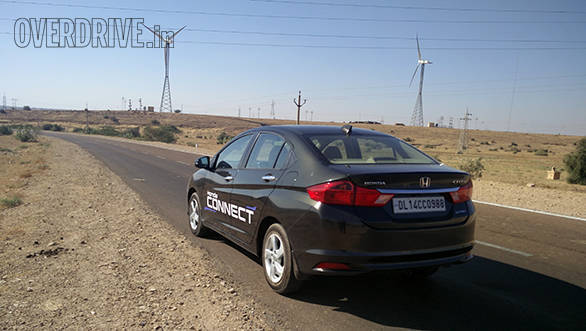 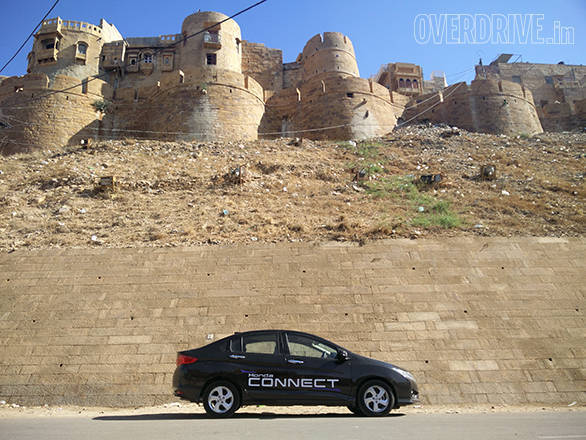 With the Jaisalmer Fort, one of the largest fortifications in the world in the background 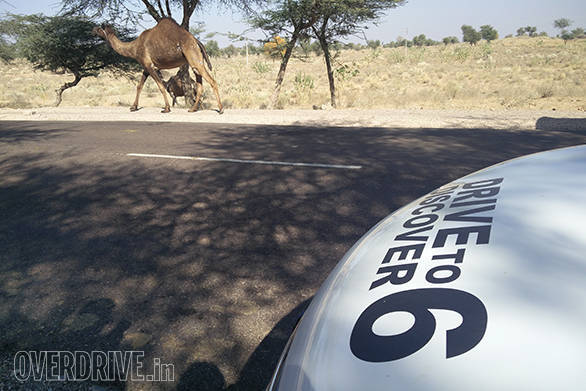