Honda Drive to Discover: Into the wild

"Saheb, ekdum shaant.wo humare taraf aarahi hai", whispered our Gypsy driver. Our curious eyes started searching for the legendary beast. And then. Drive to Discover is an annual trip by Honda Cars India Ltd. wherein it takes 25 journalists on a multi-destination trip to explore the less traveled. 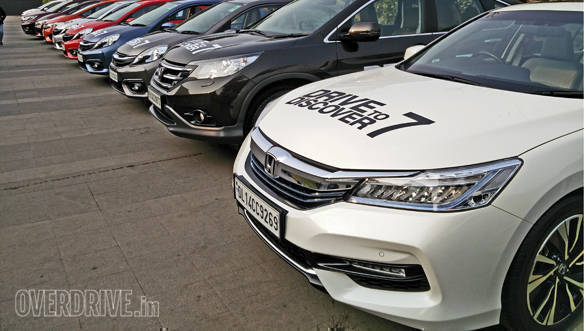 Honda's objective for the Drive to Discover series is to showcase the potential and strength of their different offerings. In the last encounter, we were taken from Jodhpur to Jaisalmer to experience the dreary desert, unplugged and off the radar. However, in this chapter, the route was a bit different. It mostly didn't have a well paved smooth tarmac and playing devil was the chilly weather. Why were we going through this? So that we could spot one of the most exotic animals in their natural habitat.

We started from Nagpur to reach Pench National Park which is a good 121km and lies majorly on the AH43. Doing duties of taking us there was  the Honda's latest entrant, the Accord Hybrid. Ever since I first saw the Accord Hybrid at the 2016 Auto Expo, I wanted to get my hands on it. And this seemed to be the perfect occasion. After completing the traditional flag-off from our hotel, we were on route to our destination. For the initial period, the electric motor powers the wheels. It is here the impressive NVH levels were highlighted. 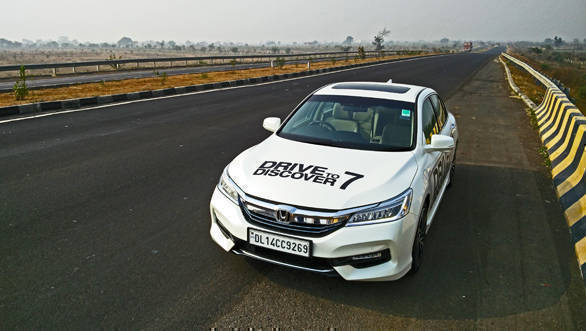 The premium and luxurious cabin of the flagship sedan seems the best place to be in. Soon after leaving the hotel premises, we joined the Kolkata-Mumbai Highway or the Outer Ring Road. The soft suspension setup gulped the slightest of undulations thereby offering an impressive ride quality. The roads were wide enough to maintain higher speeds and overtake without much effort. However, after Pauni, the roads are being repaired, and one is compelled to take a detour at different sections. We had to be extremely careful as the Accord Hybrid has a lower ground clearance. The belly almost scraped over the speed breakers and there were no dealerships or service networks in the closest vicinity. After battling through the harsh roads, we finally closed in towards the Pench National Park. The road here is a single lane but well-maintained and flows through Turiya. This entire route is surrounded with the vast of Pench National Park and is recommended to be extremely cautious as many animals cross the road. There were different sign board mentioning about the different spots of animal crossing but we couldn't sight any. Instead, we decided to click some shots of the Accord Hybrid with the natural ambience in the background. 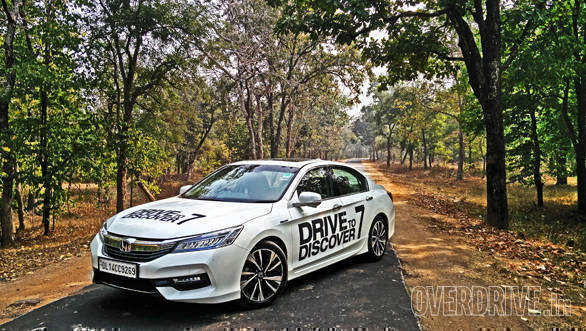 After getting a quick refresh and dumping all the luggage at the hotel, we bid farewell to our Accord Hybrid and jumped in the Gypsys,one of the most popular jungle safari vehicles. The feeling of exiting the human territory and entering a land ruled by the wild is something that can't be described. 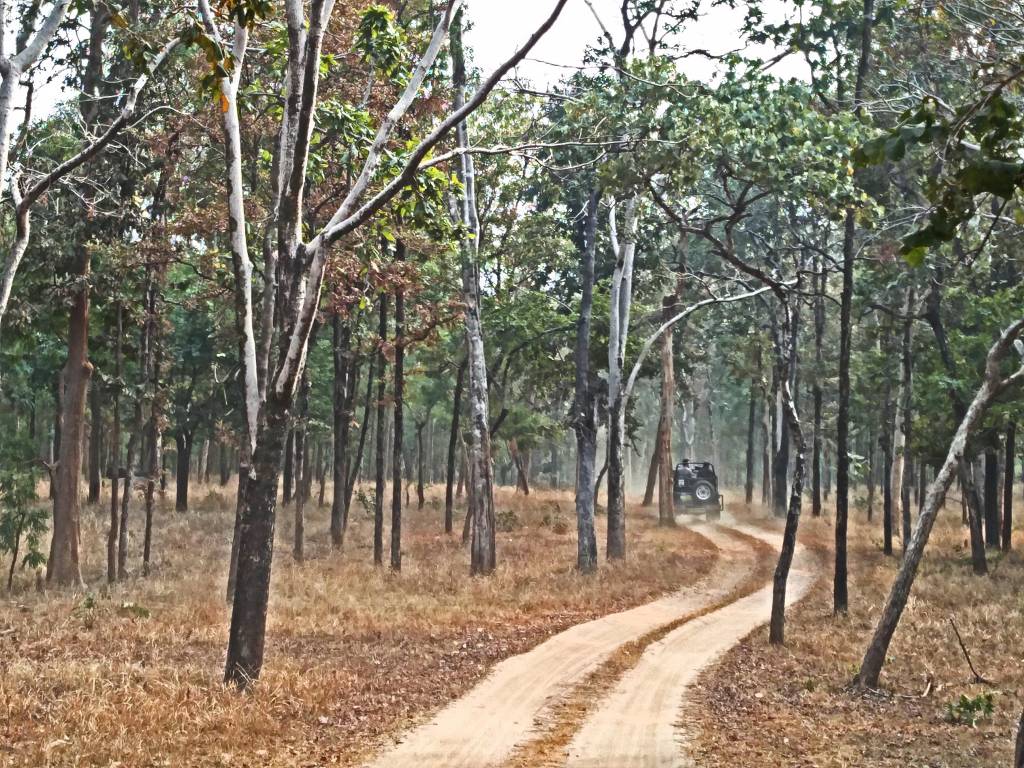 Our safari vehicle crawled as steady speeds where the driver and the guide were trying to identify the different calls of animals. The first set of animals that we spotted were deers, followed by a bunch of langurs. We continued to venture in the national park with the route getting more interesting with the sighting of different creatures. But then we hadn't spotted the most important one yet. 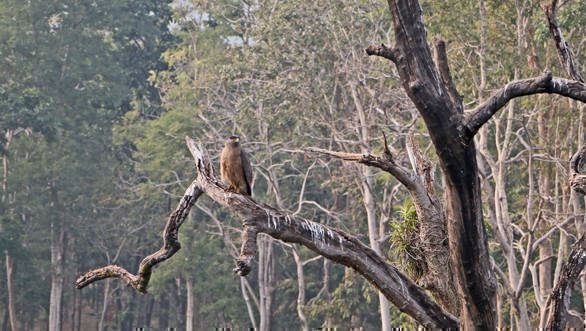 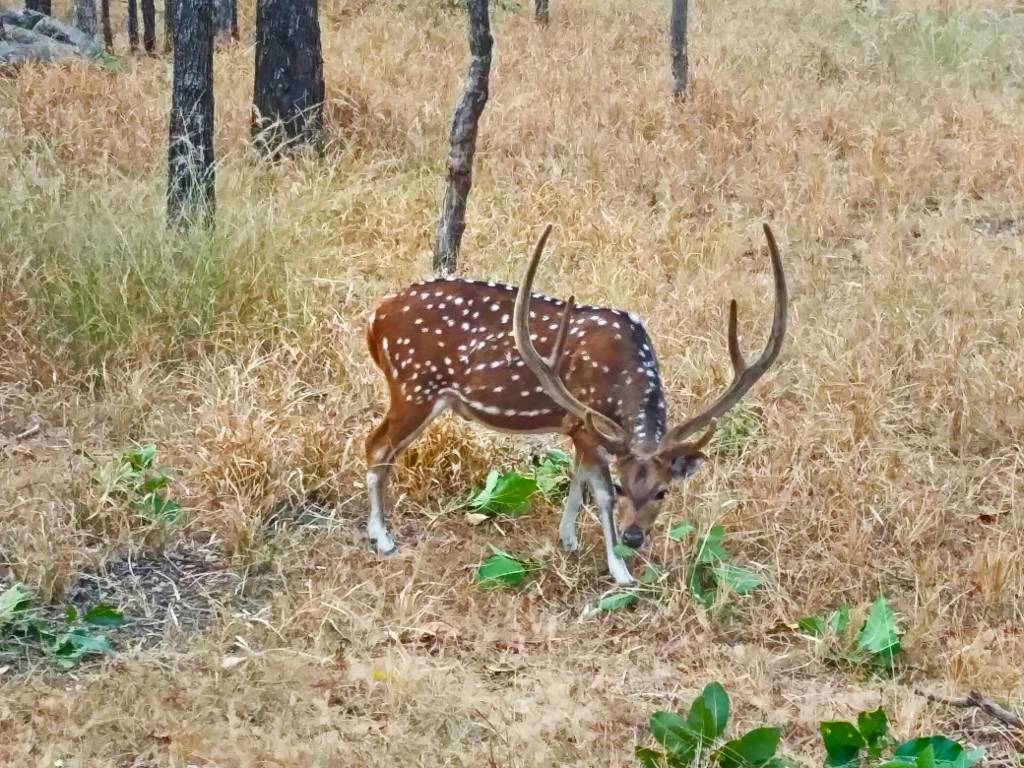 It had been almost an hour as we kept driving deep inside the national park. Suddenly, we saw a bunch of Gypsys parked in front with all glued in one direction, pointing towards something. Our guide stood up and tried to identify the different calls of the animals. Far way, amongst the trees, we did spot a creature walking slowly but was camouflaged to be identified. We noticed almost all animals had vanished except for this one. Soon after the sight got visible, we realised it was...a tigress. At this point, we all got silent to witness this rare scene. "Saheb, ekdum shaant.wo humare taraf aarahi hai", whispered our Gypsy driver. 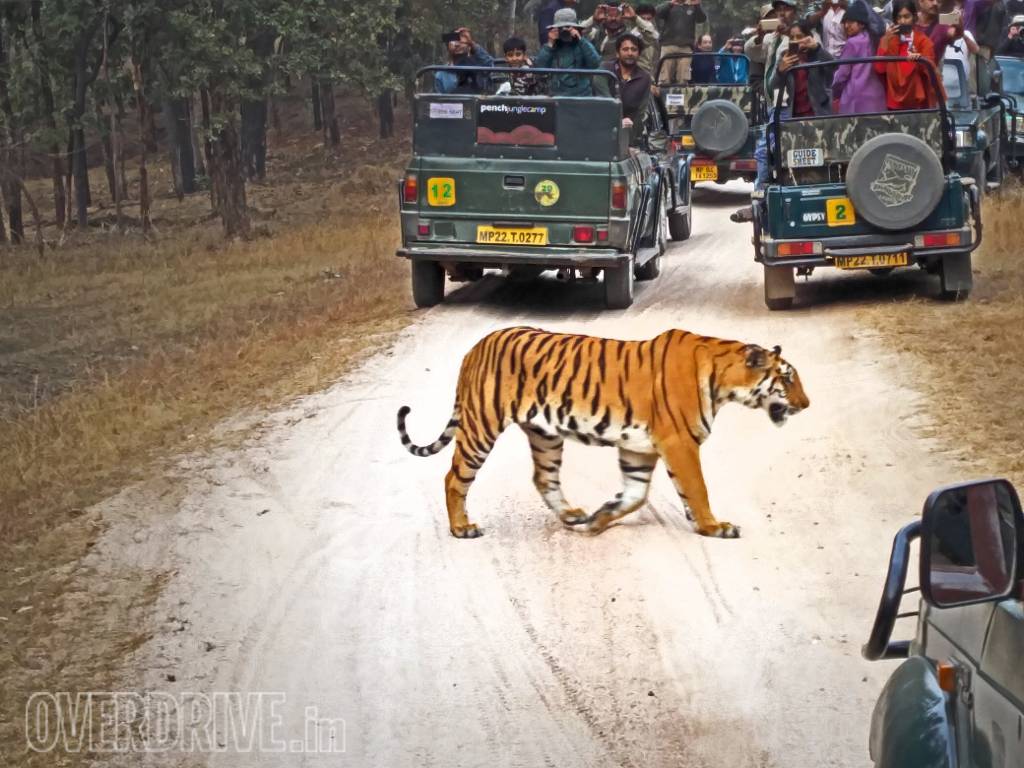 Our curious eyes witnessed the legendary beast walk towards us and stop just a few feet away from our car. The feeling was out of the world. While there was immense excitement, it was equally scary too as one wrong move and you would end up being a meal of the wild beast. The tigress, with her majestic walk, took a good look of everyone and continued to crawl on to the other side of the jungle. 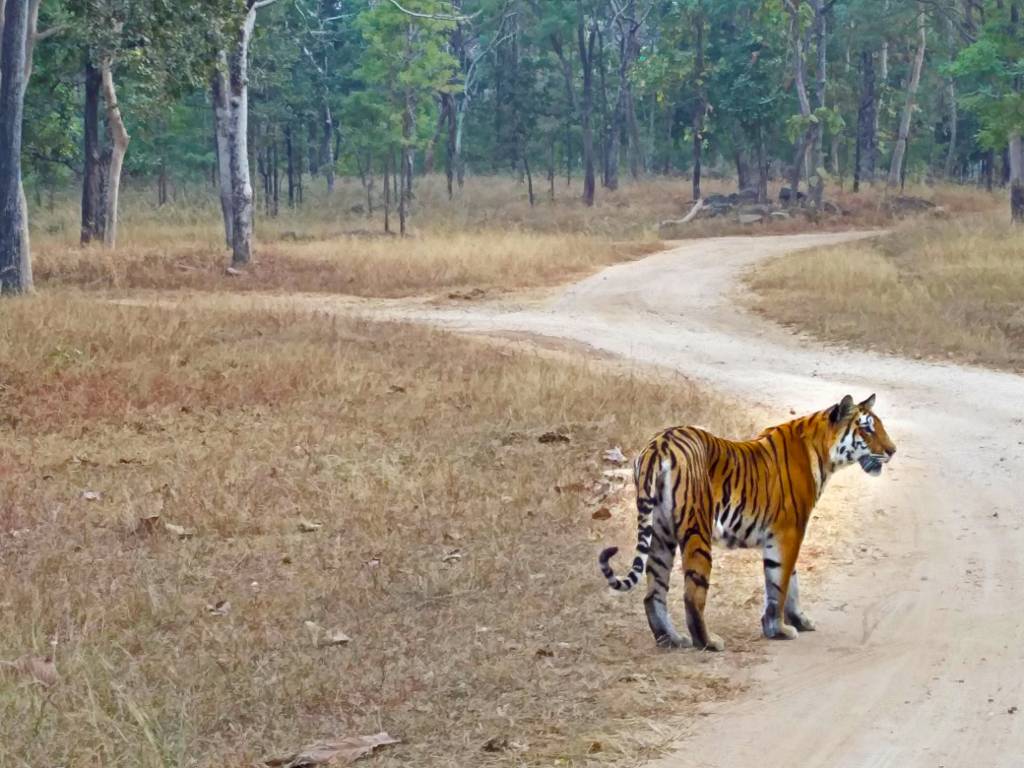 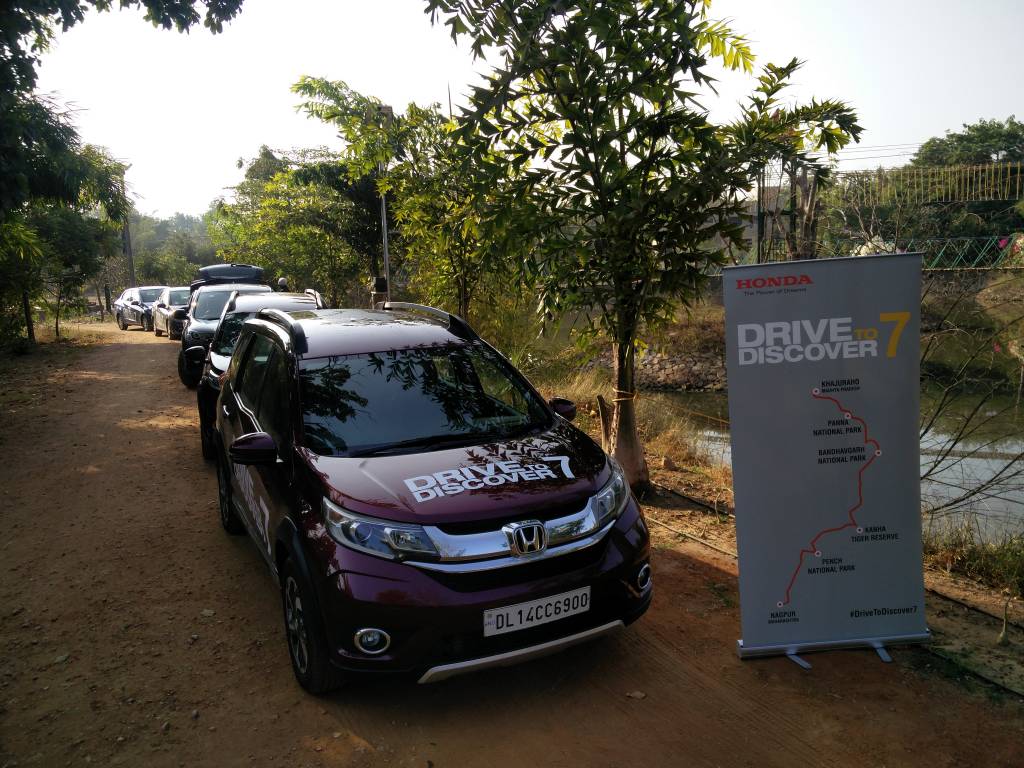 Our next stop for this season of the Drive to Discover was Bandhavgarh, a 370 km from Pench. For this leg of trip, we chose the Honda CR-V and this decision paid huge dividends. The initial patch on the NH44 was smooth and well paved. We took a temporary stopover for some quick clicks. However, we had to take a turn from Seoni, ending the comfort of well paved highways. 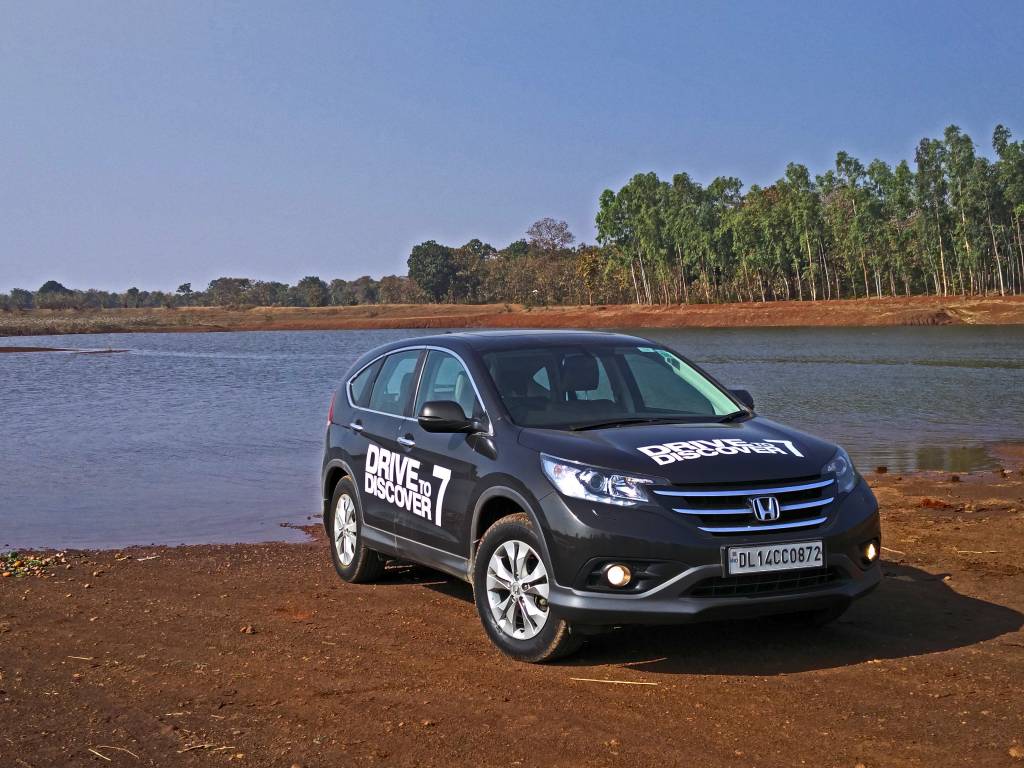 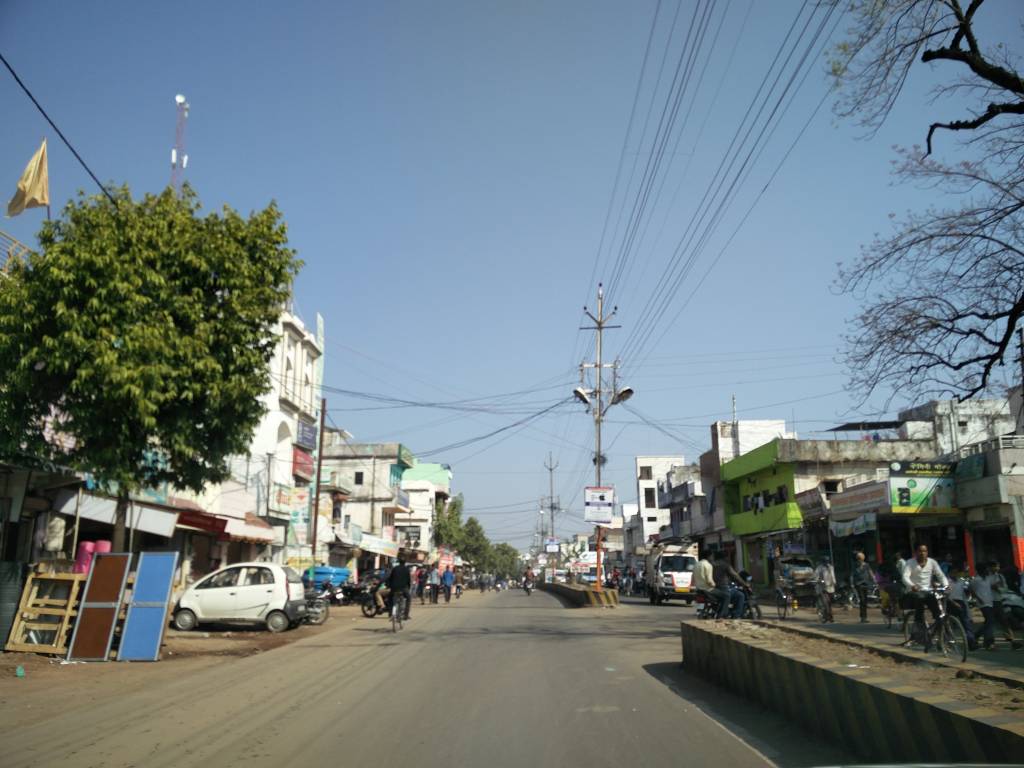 The roads got narrower and the traffic intensity too had increased posing a challenge. Soon after clearing this section, we were instructed to proceed towards Kanha where our lunch was scheduled. I did mentioned about single-lane roads but on the way to our temporary stopover point, there were sections with no roads at all. Luckily, the Accord Hybrid was sent back from Pench itself. The Honda CR-V with it tall ground clearance rumbled over this rocky sections. Though in sections, the suspensions were challenged by ditches and stones rubbing the underbelly but the SUV didn't hesitate at all and kept going. 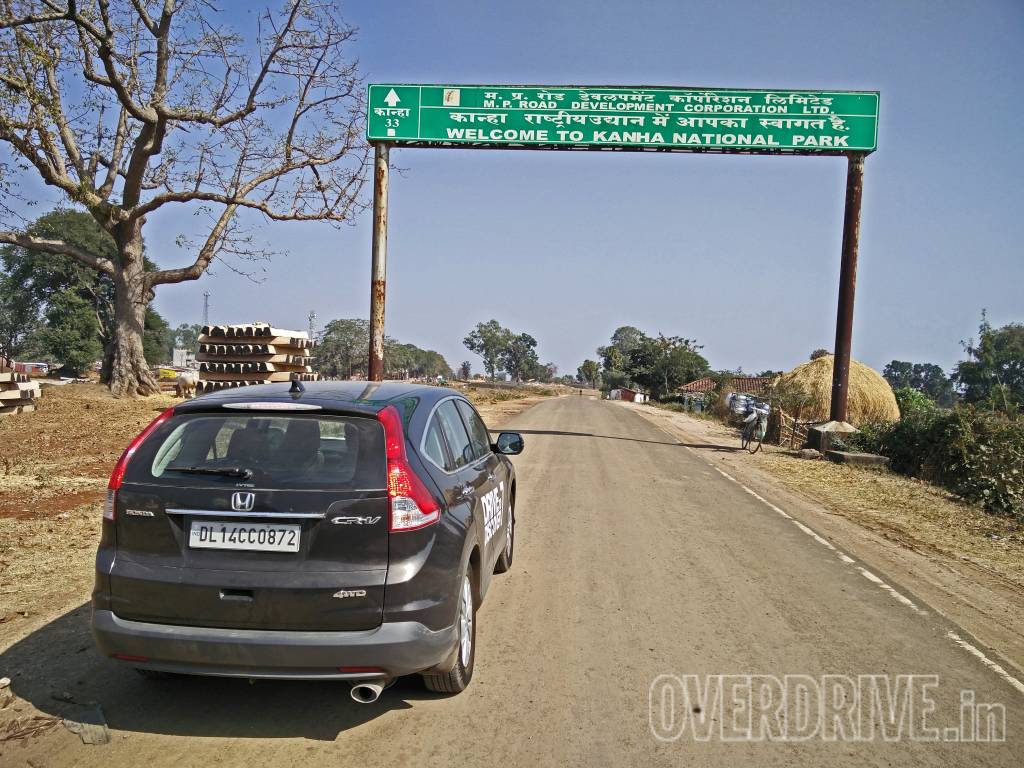 After finishing lunch, we were on our route to Bandhavgarh. Unfortunately, after covering a long stretch we realized that we had taken a wrong detour. And there was no network to verify or call anyone. Instead of a highway, we took a different route through a small village and then a jungle. Some also cautioned us about the animals in the jungle. While the scenery had got a lot more beautiful than the mundane highway, we were running low on fuel. Also, as the sun had begun to descend our hope of reaching the destination on time was slowly diminishing. We were lost in the jungle until a motorcyclist stopped to help us. He finally gave us the correct direction. We completely ignored the the distance to empty numbers and continued driving till we finally reached a highway. We were on a section of a road which was had negligible traffic. We witnessed the last glimpse of the sun setting and it was extremely beautiful. 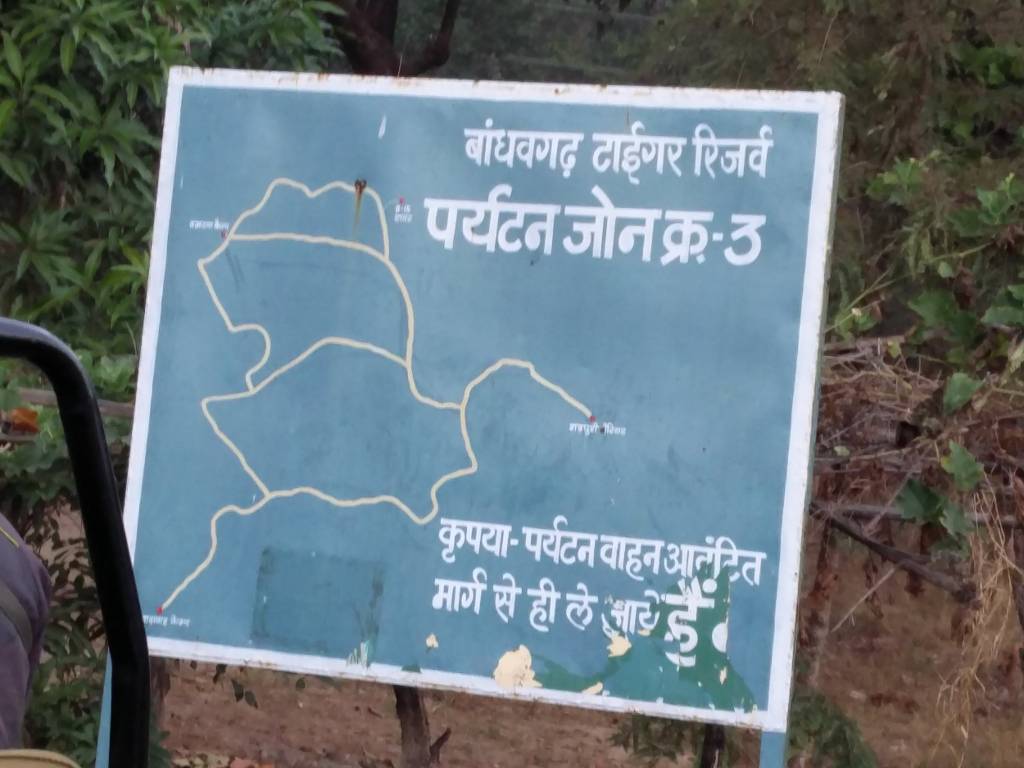 The alarm rings at 4AM and it is pitch dark outside my room. The temperature has dropped to single digit. And I was trying to collect all the courage to step out of the room. Again, we hopped on the safari prepped Gypsys in our quest to spot the wild species. 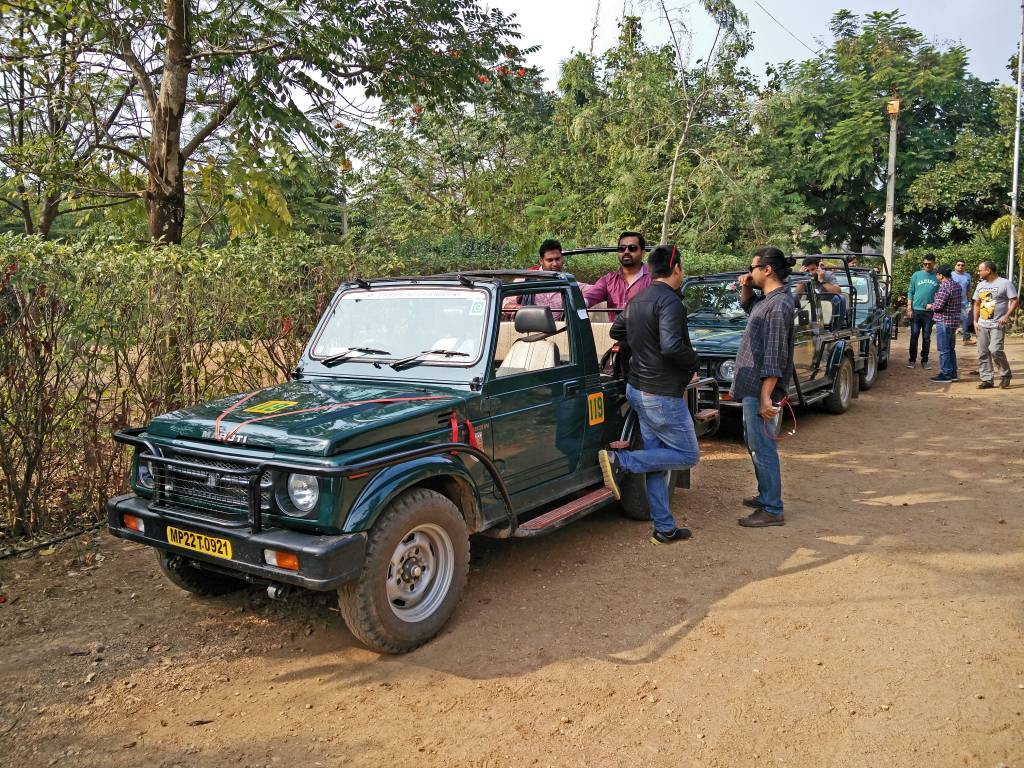 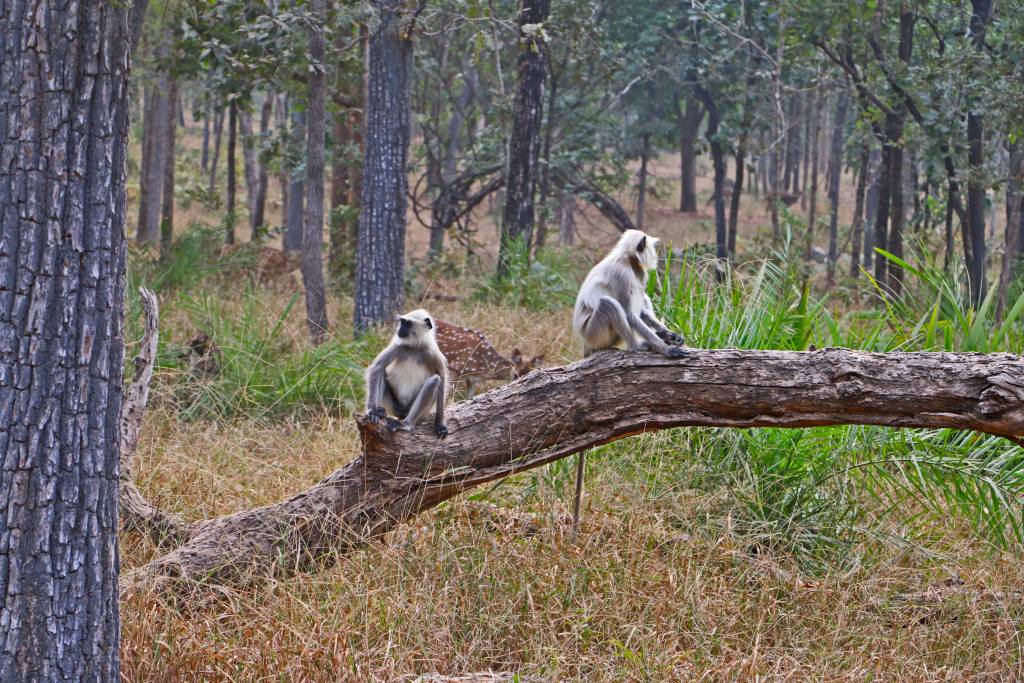 The Bandhavgarh National Park is known to have the highest density of Bengal tigers in the world. The discomfort of the chilly weather was evident as everyone was wrapped in shawls over the jacket but the hope of sighting more tigers kept us going. We spotted a herd of nilgai or blue bull that was a first for me. This was the only creature that was different from our sightings at Pench. The rest of the creatures were similar. Our guide told us that tigers aren't too comfortable in such chilly weathers. We finally returned to our accommodation. 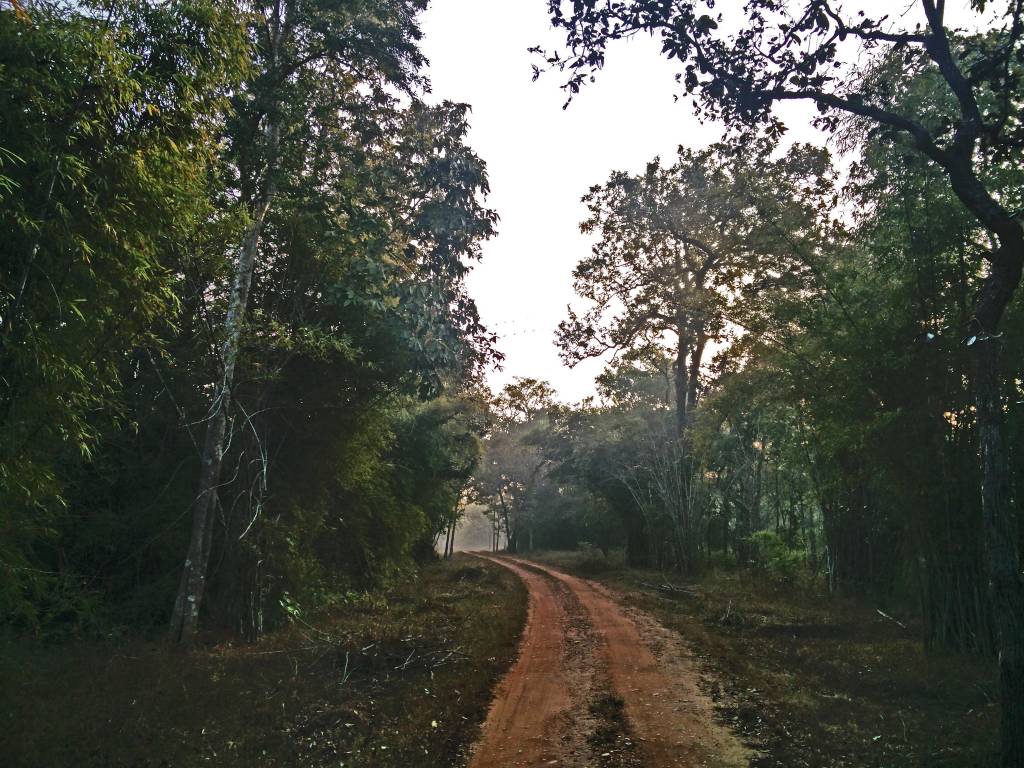 We got our bags packed and headed to Khajuraho. I had been driving for quite sometime now and therefore chose to relax myself in the backseat of our Honda BR-V. The spacious and the comfy rear of the BR-V was really soothing. I also managed to catch a quick nap before arriving at a small eatery. Locals recommended veg delicacies which we happily tested. 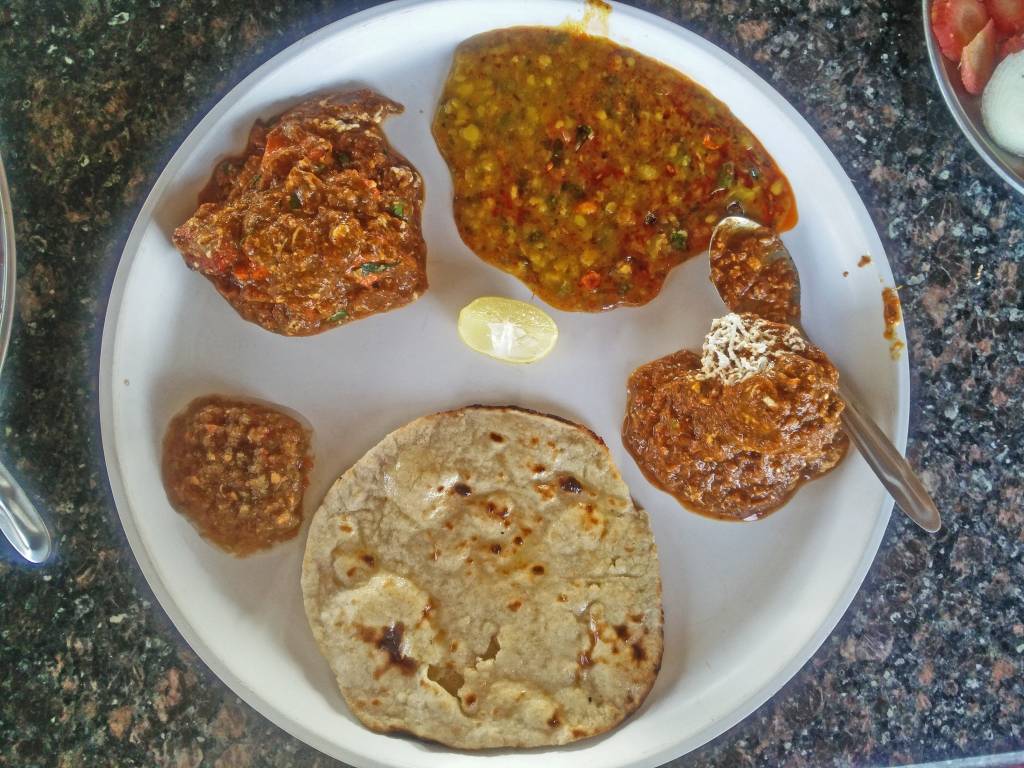 Our BR-V munched miles after miles with different milestones giving us an idea of how close our destination was. We hurried a bit to make sure we not only reach Khajuraho on time but also catch the last fascinating light and sound show in the temple premise. For those who aren't aware of this, it is a 50-minute narration by Amitabh Bachchan that traces the times of the great Chandela kings along with the history and the reason behind the famous Khajuraho temples. Our last stop for this season of Drive to Discover was Khajuraho. The city got its name with the large vast of date trees that were present around the region. Though the temples are mainly known for the erotic sculptures, there is a lot more to it. The different architectural structures illustrate the different phases of life according to their relevance. The different characters in the structures showcase royalty, soldiers, celebration, spiritual teachings and wars in addition to lovemaking A total of 85 temples were built originally, out of which only 20 have made it till date. A definite recommendation if one cherishes art. 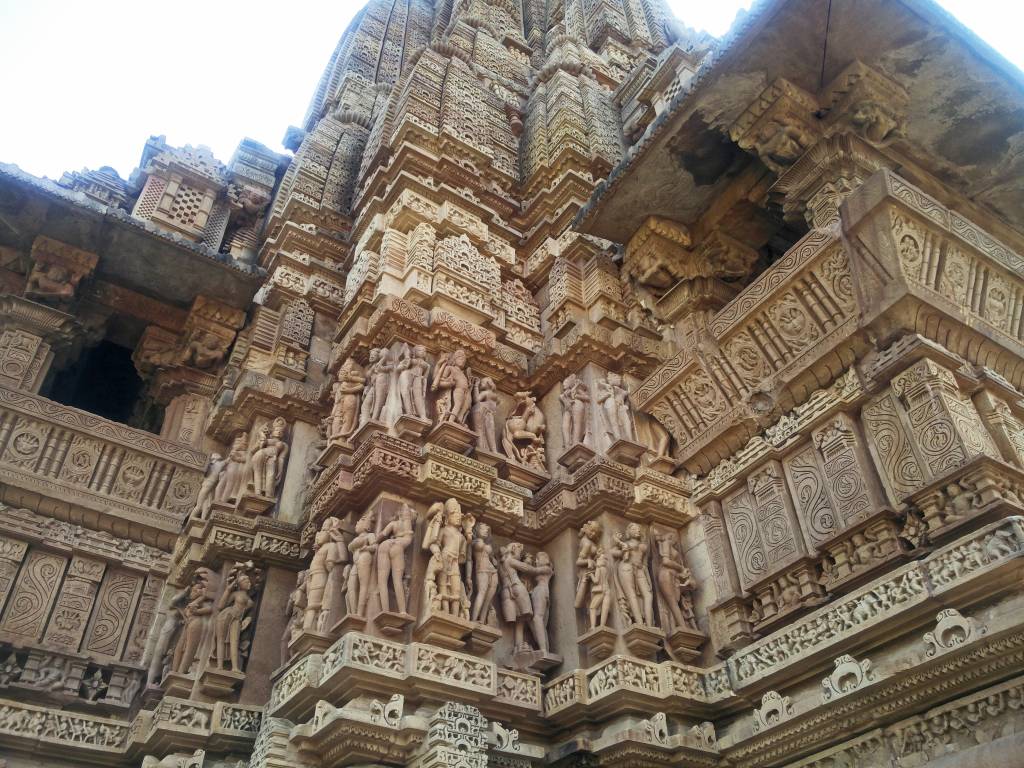 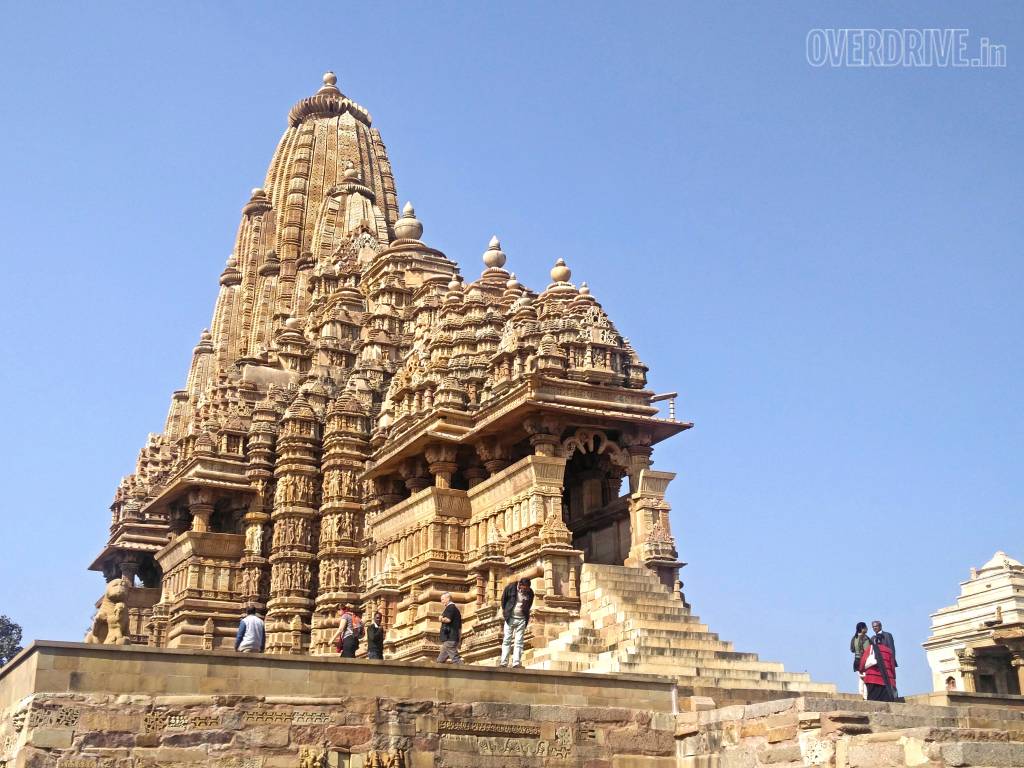 Sighting a tigress that too a few feet away, experiencing the natural habitat of the wild, getting lost in a jungle and witnessing the rich historic art is what I took home from this season of Honda's annual event. Will Honda raise the mark further in the next? Let's hope.