The Harley Rock Riders concert in Mumbai was the go to place for rock music and motorcycle aficionados alike. Along with the big names in the galaxy of rock stars there were Harley-Davidson's finest motorcycles on display. The company has a wide range of customisation options for Harley owners that helps them individualise their ride. But what if you want something radically different. A motorcycle that would be an extension of yourself. Harley-Davidson decided to get together five of the best custom motorcycle builders in India and asked them to re-imagine a Harley-Davidson, quite unlike anytime before. To judge who'd be the best, they got the best to decide.

Kaichiroh Kurosu is a master Japanese customiser who owns and runs the famous Cherry Customs in Japan. A huge favourite amongst those who desire uniqueness and individuality, Kurosu san has an eye for detail. He has customised a long list of Harley-Davidsons and his experience made him an apt choice for the jury. He was joined by Claes Loberg, founder of Guvera, the online streaming service that was founded in 2008. The judges were looking for clean design, uniqueness, the story behind the design, the finish and rideability of the custom motorcycles.

The competition was tough and this is what it looked like.

Created by Saurabh Shirke and Arjun Bafna, the Motomiu Sabertooth is a Harley-Davidson Forty Eight that's completely reimagined and beautifully executed. The duo's claim to fame is the Motomiu Katanga Uno that's based on the Street 750. That motorcycle won the Best Dealer Custom at the 2014 Indian H.O.G rally and the India Bike Week. While the Katanga Uno was customised upto 25 per cent only, over 90 percent of the Sabertooth is custom built.", says Arjun Bafna. He adds, " We wanted to push ourselves with the Sabertooth. After the Katanga we decided to see what we can do." The result, in my eyes, is a stunner. 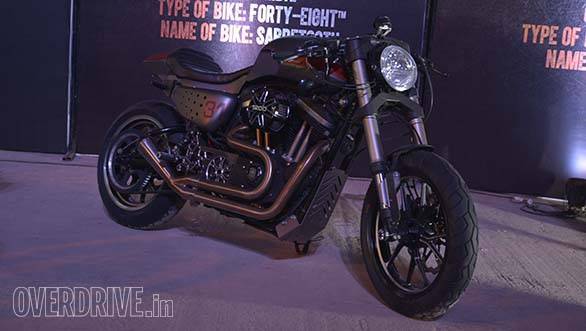 To begin with, the fuel tank is a completely new design and was created in house. It has minimal curves, almost like a cafe racer and gels well with the rest of the motorcycle. The gunmetal paint finish looked very appealing and I liked the streak of metallic red that contrasts  with that shade of grey on the tank. The Motomiu fuel tank cap, with the letters MM embossed on its top looks cool and highlights the attention to detail that's lavished on the Sabertooth. 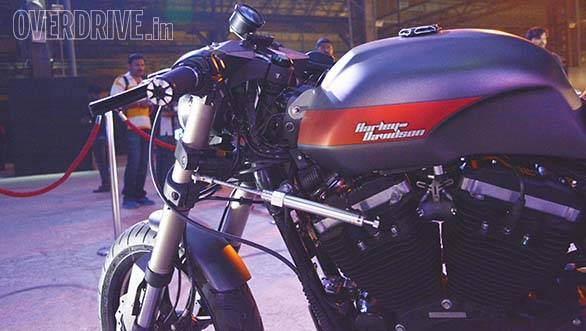 Motomiu's workshop in Vashi, New Mumbai has some of the latest tools and equipment to shape metal. Using their resources to the fullest, the team has designed a custom triple-T that holds USD forks by WP. Motomiu has also designed a new swing arm to incorporate a monoshock at the rear (The original Forty Eight has dual shocks at the rear) and it's barely visible when the motorcycle is viewed from the side. 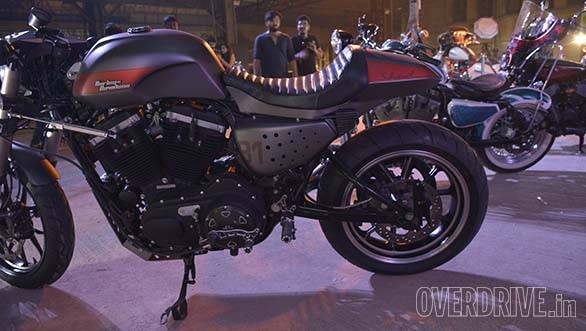 The side panels are flat surfaces with drilled holes of varying diameter to reduce the plain jane effect. The tail section panels are also fabricated in house and is minimalistic. Overall, the Sabertooth has an aggressive stance and looks fantastic. The team has also redesigned the two into one exhaust and the motorcycle sounds terrific. Other custom bits include Motomiu logo engine casings, rear sets, foot and gear lever, all-digital speedo and a bash plate to protect the lower half of the engine. 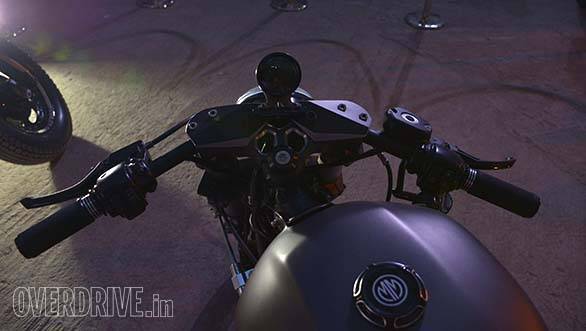 The Motomiu Sabertooth is a motorcycle that's a major improvement over the Katanga Uno and kudos to the team for churning out an impressive product. While we've already ridden the Katanga Uno, we will try get our hands on the Sabertooth soon.

Tushar Jaitley is not a hardcore motorcyclist, however, he loves automobile design. He has a degree in automotive design from an Italian institute and he believes that automobiles can be customised as far as one's imagination. He runs a custom shop in Delhi that goes by the name TJ Moto and he's only begun. At the show, he displayed his prized possession, Nadia. He bought an Iron 883 and stripped it down, right to the frame. He then chopped the tube that runs underneath the stock motorcycle's fuel tank and fabricated a new frame element that runs over the tank. 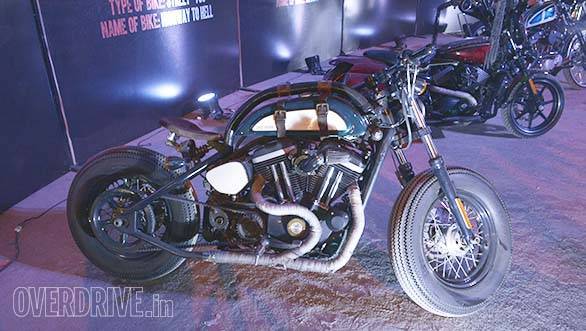 The tank per se is crafted by his vendor but he makes sure that he is around to ensure the craftsmen form the shape to his desired specifications. The  overhead frame tube that goes on to meet the rear end section of the frame endows the motorcycle with a floating tank effect that's surprisingly well executed. The British Green colour stands out in contrast to the rest of the motorcycle and is the best bit.  The single seat is spring loaded and the motorcycle is a hard tail so don't expect to ride for too long in case you order one. Tushar wanted to maintain the retro appeal of Nadia and hence ordered the wheels and tyres from abroad. The wheels add that touch of classic sophistication to Nadia, rendering her with an alluring silhouette that's tasteful and minimalist. 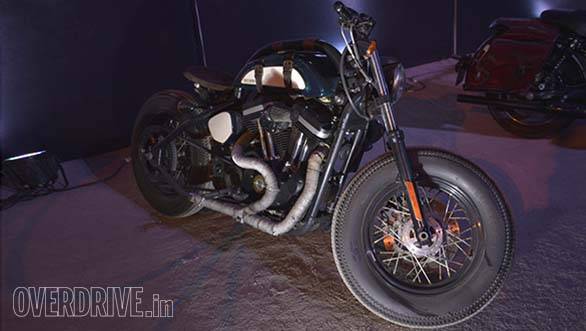 Based on the little Street 750, Highway To Hell, at first glance looks in your face. Envisioned by MJ and Saikat of the East India Motorcycle Revolution (EIMOR) the motorcycle is, in their words, "a canvas for the duo to express their creativity". The paint job is excellent and the details on the tank such as the skull and bones that's also used liberally on the XL size fairing. It's way too large and looks like it will act as a massive air brake,certainly not practical. The crash guards have a strip of LED lights that look too aftermarket to suit the entire motorcycle. 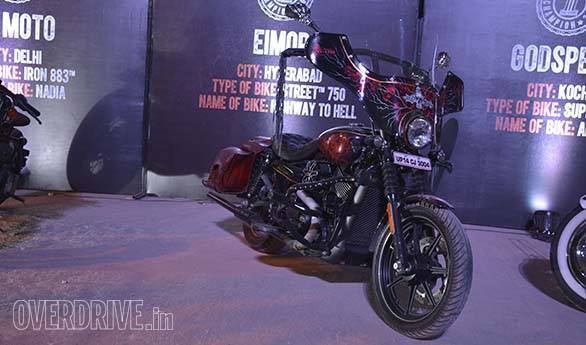 Besides the interesting paint job, the motorcycle gets a huge cross stitched seat that's seems ideal for your living room. The saddle bags add to the highway rider theme and that sums up the visual details of the motorcycle. The stock Street 750's exhaust unit was criticized for being too muted and team has replaced the end can with a more throaty sounding unit. The duo say that they wanted to focus on distinguishing the looks without making too many changes that'll compromise the rideability of the motorcycle. Highway to Hell, with its superb paintwork looks the part but if only the overdone fairing could be deleted from the equation. 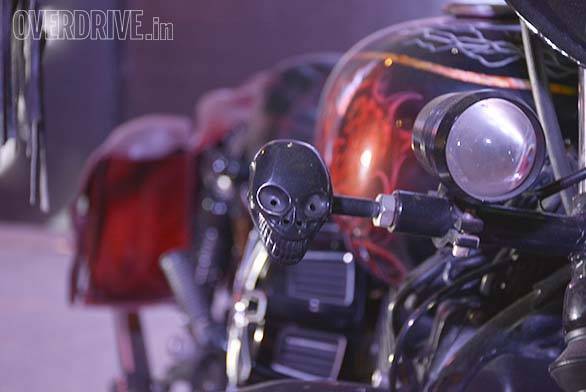 From Kochi, Kerala, were team Godspeed. Nikesh and Nitin shared a common passion, to build real world motorcycles that not only look different but also allows one to ride the motorcycle too. They created Alecia, a Harley-Davidson Superlow with a retro design that was in stark contrast to the original. " We believe that Harley-Davidsons are old school motorcycles and the design should hence exude that old world charm.", said Neel. The motorcycle belongs to one of their customer  and hence had some personal touches like the crown that doubles up as a fuel filler cap. 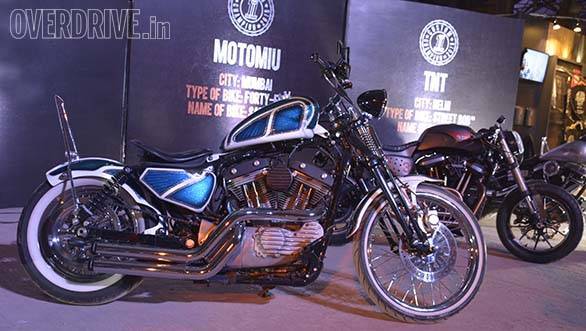 What got my attention though was the front end. The front suspension was eye catching and its dual springs with a damper, all finished in chrome, reminded one of Harleys of yore. White wall tyres on wire spoke wheels and a disc brake with single pot caliper was another highlight. 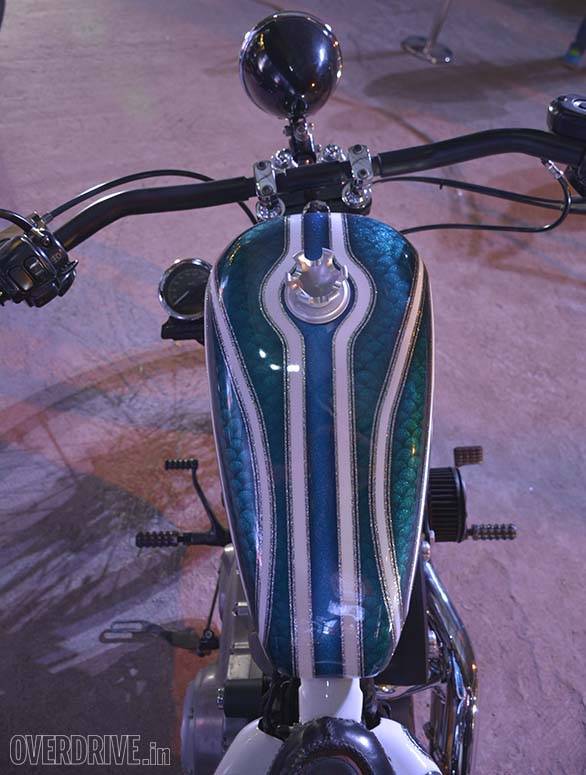 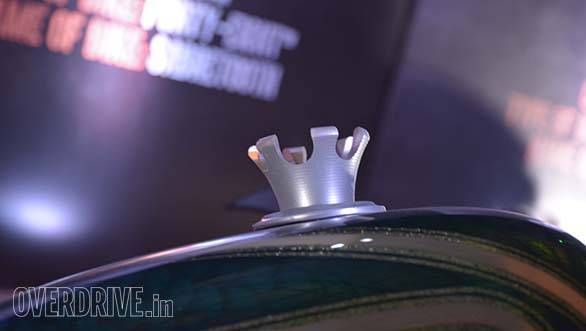 Neel quickly added that the single seat was imported from Texas and the handlebars were sourced from the USA too. "We source some of our parts from companies that specialise in making those products, like the handlebar." The head lamp and the tiny tail lamp were fabricated in India. Alecia wore a simple yet artful pin-striped paint job that added to the theme. The design was flowy and thankfully not an overkill of lines and curves. Overall, the motorcycle was tastefully executed and it was one of the front runners for the title. 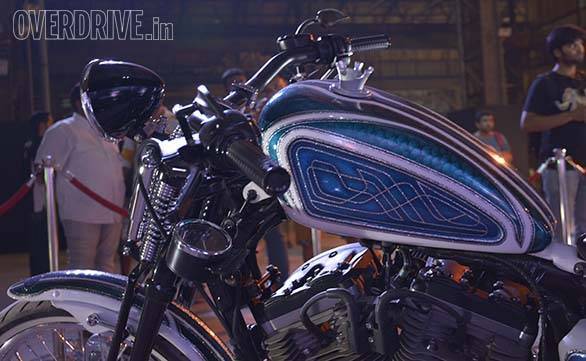 TNT Motorcycles as an enterprise is a little over a year old. Started by Naveen and Nitin, TNT was born after a custom bike builder left them high and dry after promising to help them build a motorcycle. The duo set out to get it done on their own accord and as they say the rest is history. Naveen and Nitin have over 12 years of experience collectively, in design , manufacturing and development of automotive parts. 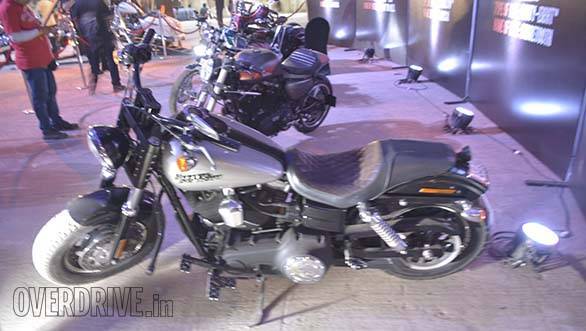 Their motorcycle, Urja, at the competition, however was a little bit of a downer. It looked like a standard Street Bob with a few Harley-Davidson aftermarket bits and hence, in this company looked regular. Given the duo's long term experience, I was expecting a lot more and Urja could have looked a lot different since it was the only Harley-Davidson from the Dyna family. An opportunity lost indeed!