Events taking place at the very same venue can be contrasting in so many ways. It was this thought that occurred to me when I found myself at the Kari Motor Speedway near Coimbatore for the second time in three weeks. My first visit to the track had been when I attended the MRF National Racing Championship, which seemed like it was all about the serious business of racing. But this time around, at the opening round of the 2018 JK Tyre FMSCI National Racing Championship, things seemed a little different. The event was, let's say, more fancifully organised, with pomp and show aplenty. My colleagues who had been around a little longer than I had, told me that this was characteristic of the famed motorsport rivalry between the reds and the yellows, but since I wasn't hadn't been able to witness this myself, I just took their word for it. 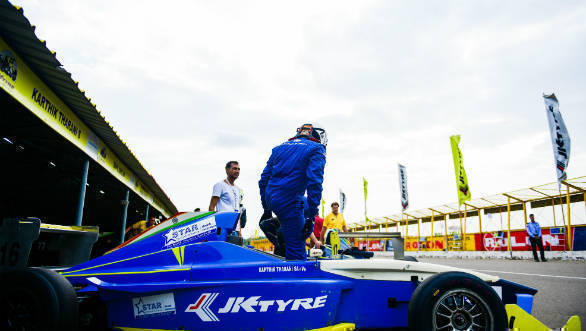 Well, at any rate, it wasn't like the pageantry took away from the racing itself, so it mattered little to me. On offer, then, were the top tier Euro JK 18 races, the Suzuki Gixxer Cup, and plenty more. Of the many drivers who impressed me over the course of the weekend, Karthik Tharani stood out the most. In what was effectively his return to competitive motorsport after a hiatus of a year, Tharani was already on the pace, taking victory in Race 1 and Race 4. It wasn't my first encounter with him though, having had the opportunity to meet him at the Volkswagen Ameo Cup, where he was working with VW Motorsport as a development driver and driving coach. At that time I thought of Tharani more as a development driver and driving coach, just passing on some knowledge to the newer crop of racers, but the more I saw him race, the more I realised that was perhaps too superficial an assessment of his very many talents. 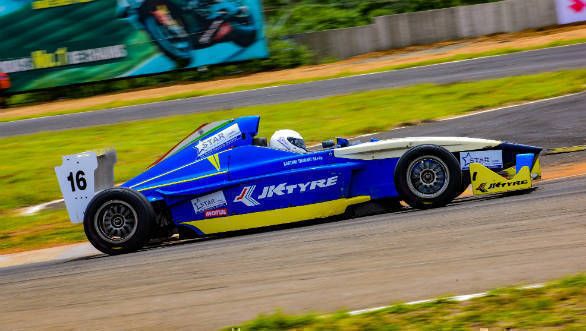 Tharani has had a moderately long career in the world of motorsport. He's seen ups and downs and he's also had his own internal strife to deal with. He speaks to me of the time when he missed out winning the MRF F1600 championship by a single point in the 2016 season. While many racers would have felt like they'd achieved something just by finishing runner-up, Tharani was less than pleased with himself. It was time for some self-reflection, and he sat down and thought long and hard about himself and the way he went about racing. 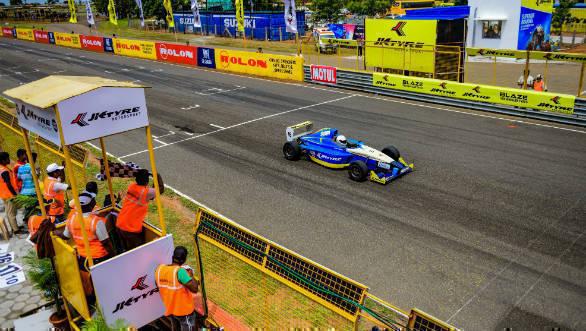 Tharani tells me he had been a very aggressive driver before this, but the incident got him to evaluate himself. There was a point where he felt a little vulnerable like he'd managed to understand his strengths and weaknesses. But he said that with that knowledge he realised that he needed to learn how to win. He needed to learn to control his aggression, he needed to learn to respect his competitors and his team-mates, and he realised he needed to ensure that he couldn't just wait around for things to happen. He also drew inspiration from a few people that he idolised too - his brother Prashant, who has managed to compete in a few international endurance racing events successfully, Ayrton Senna who is arguably one of the greatest F1 drivers ever, and Adrian Newey who is the technical genius behind the success of the Red Bull Racing F1 team. 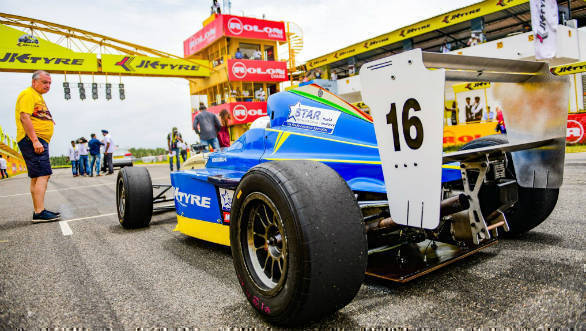 All of these lessons - both hard and inspirational - have led to his goal of wanting to become a paid factory driver in the World Touring Car Championship at some point in the future. He wouldn't mind ending up racing GT cars in a series like the Blancpain GT Series either. And he's also been pointedly working towards this dream, handling a simulator business he and his brother teach racers who can't afford real track time, the finer points of racing in a race simulator). And he spends 3.5 hours every single day in the gym. 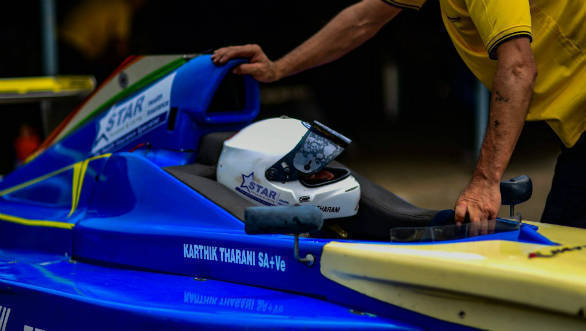 For Tharani, the more recent setback has been that he had to miss out on the chance to go abroad and race a TCR with VW in 2017, because of a lack of funding. Which meant that he sat out the 2017 season, except for a guest drive in the Euro JK 17 championship to show for it. But sponsorship from JK Tyre and Star Health Insurance came through ensuring that he could race in the Euro JK 18 series. 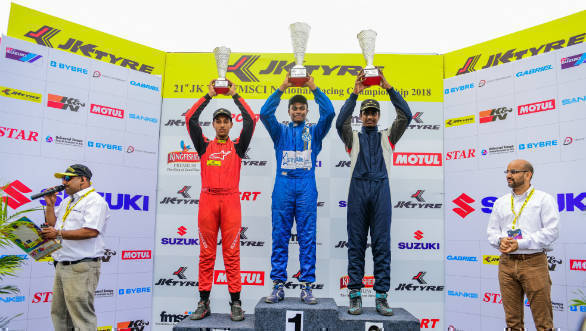 Racing single seaters might seem a counter-intuitive move, given his touring car ambitions, but he says this has worked out great for him, at least for the near future. The Euro JK car seems to have come along a bit and is marginally quicker than the F1600s and does a great job of keeping him sharp and help him develop his skills. 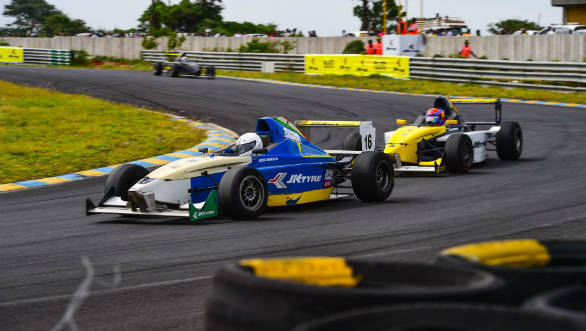 All of 24 years old, the Chennai lad first came in contact with motorsport when he was around 15. Tharani never had any formal motorsport training and also hasn't charted the traditional route through karting. His brother first let him get behind the wheel of a junior touring car for a few laps during his practice sessions in 2009. Tharani broke the first racecar he ever drove, which he's since put this behind him. He eventually started racing in earnest two years after that in 2011 for half a season of the Indian Junior Touring car championship. Since then, he's won pretty much everything at his level, starting with his championship win in the VW Polo Cup in 2014. He was also able to transition smoothly into a single-seater competition, winning the championship in the MRF F1600 in 2015. He's always remained a front-runner even in the years he hasn't won. 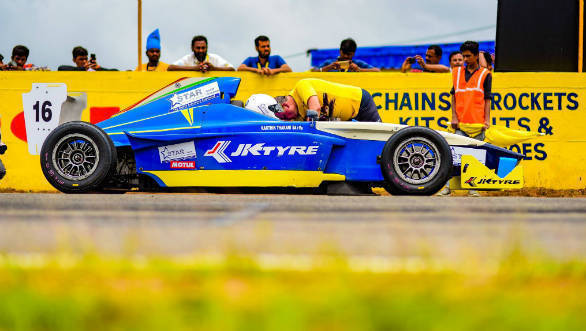 The fact that Tharani has now made it to the 2018 JK Racing Championship, with successes and victories in the very first round, despite the fact that he's been away from a race car for the better portion of a year, has something to with his work ethic. He is very data-oriented. He accentuates his skill with a lot of time spent analysing race telemetry and literally analyzing how to go around a track as quickly as possible. This work ethic, along with his automobile engineering background, has also aided the simulator business he runs with his brother. 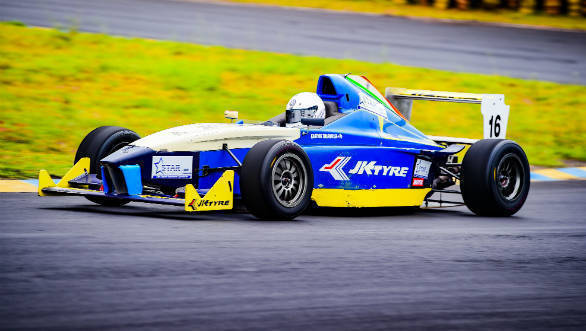 Talking to Tharani about how he has seen Indian motorsport grow over the last nine years, it seems like his career graph has captured quite succinctly how he thinks the landscape has changed. The touring car championship is too outdated to be a national-level championship, with participants still using 20-year old Maruti Esteems. The F1600s, he feels, have grown tremendously though, from having a mostly international grid to now having young, energetic racers, graduating from karting compete in the series. And the JKNRC is also doing a good job, and according to Karthik, the Euro JK 18 cars are a huge step forward. And the drivers today, are fitter, more committed and more knowledgeable than ever before. 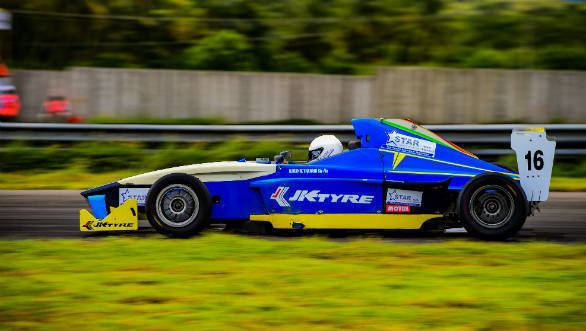 Tharani's immediate goals, in case he isn't able to make it to the international scene next year, is to continue to work within the framework of domestic motorsport. And then go back to the drawing board and try again later. As for the Euro JK 18 championship? Naturally, his goal is to win. But with the likes of Bryan Perera and Nayan Chatterjee around, it's not going to be an easy run to the next championship trophy either. From what I've seen though, he's certainly going to give it his all!