The Electric Formula
Of course, we're sure you've gathered by now that the 'E' in Formula E stands for 'electric'. And Formula E Holdings, Alejandro Agag's company, that is the controlling body behind the FIA backed series, has ensured that they have managed to get the best in the business to be a part of the series. The monocoque carbon aluminium honeycomb chassis has been developed by Dallara, who have also worked on the aerodynamics of the car. Propulsion is developed by McLaren Electronics System, part of the Mclaren group, who have manufactured the electric motor or MGU (Motor generator unit) as in Formula 1 and the electronic control unit (ECU).

The main power source, batteries, are provided by the experts in energy storage devices, Williams Advanced Engineering, part of Williams group. The gearbox is provided by Hewland, and is of fixed ratio across the grid to save cost. Assembly of the car is taken up by the French company Spark Racing Technology and the integration of all the components is overseen by the championship's technical partner, Renault, hence the name Spark-Renault SRT_01E. Michelin, the official tyre providers have come up with 18 inch treaded solution for both wet and dry conditions.

Powering on
What gives the Spark-Renault SRT_01E motive power is the electric motor or the MGU which is the size of a shoe. But don't be fooled by its size. The tiny motor manages to develop 270PS and accelerates the car to 100kmph in 3 seconds with a top speed of 225kmph. Not so surprisingly, the motor shares the development with the hybrid hypercar from Mclaren, the mighty P1.

Electric motors are known to deliver instant torque right from the word go ensuring scintillating acceleration with tyre smoking drama. As a result of the ban on traction control, the cars are likely to be a handful during starts and corner negotiation. Absence of the ancillaries like the intake, exhaust, turbo, and uncountable moving parts of an internal combustion engine, means this powertrain is likely to be more easy to understand, maintain and race. The motor is mid-longitudinally mounted and mated to a five-speed paddle shift sequential gearbox powering the rear axle only. Engineers can choose to place two motors on the rear axle, but no more, with both motors producing similar power totalling to 270PS. Energy transferred from the battery to the motor shall not exceed 28 kilowatt-hour, and this will be monitored by the FIA, this being similar to capping the rate of fuel flow as in Le Mans. These cars will all come with Kinetic Energy Recovery System (KERS), as during braking the motor will act as a generator sending the energy back to the battery.

Battery and the associates
Each Formula E car will weigh a minimum of 800kg including the driver and the batteries. Speaking of batteries, which the FIA broadly calls Rechargeable Energy Storage System (RESS) can comprises of battery, supercapacitors or ultracapacitors and should have the maximum capacity of 200 kilowatts. The weight of the battery cells or capacitors should not exceed 200kg. Cars cannot be charged during practice, qualifying, races, or prior to the completion of post-qualifying or post-race scrutineering. Charging of the cars in the pits has to be done by FIA approved equipments only. From dead, a Formula E car takes fifty minutes to full charge.

The suspension system is the conventional double wishbones, pushrod operated, torsion bar front and springs rear. It also comes with adjustable dampers, adjustable ride height, camber and toe and anti-roll bars. Steering is non-assisted rack and pinion, though power steering is allowed. Onboard telemetry is not permitted. 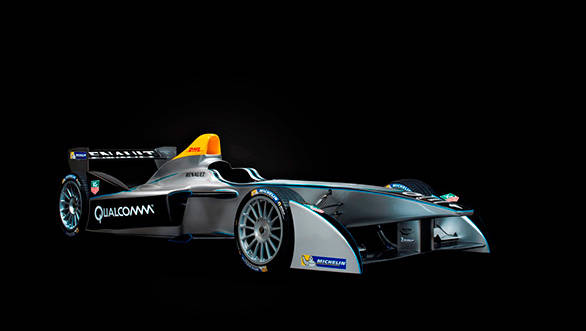 Rules of the game
Each practice session will be 45 minutes long followed by another 30 minute-session. Drivers will have two cars at their disposal should they want to change. Qualifying will be a 55 minute session with five cars split into four groups, each group going out on track at a time. The entire battery power of 270PS will be available during these sessions.

The race or the e-prix will be flagged off with standing starts and will last for approximately one hour. The driver will have to make one mandatory pit stop to change the car, so a team will have to keep four cars in race readiness (two for each driver). Power for the race will be reduced to 202.5PS. An interesting ingredient to the e-prix is the Fan Boost. Fans have to vote for their favourite driver online prior to the race, three drivers with most points will be awarded with the power boost of up to 40.5PS each for five seconds per lap for that race. Vote for your favourite driver online if you are still waiting.

Each driver will be supplied five sets of tyre per race weekend. One front tyre and one rear tyre must come from the previous event. Tyres, unless punctured are not allowed to be changed during the course of the race. All the events including practice, qualifying and the race will be held on a single day.

Teams are allocated with nine official test days, five pre-season, two in-season and two post-season. Contrary to the belief of many, the cars that finally came out for the test session were far from silent. In fact the whine from the motor sounds modern and futuristic with 80 decibels on tap, as compared to 70db produced by a road going car.

The e-prix will be held on the street circuits all over the world, and for its inaugural season, the series comprises of 10 rounds starting from Beijing on 13th September 2014 and concluding in London on 27th June 2015. The idea behind organising the races in the heart of the city is to bring the sport closer to the fans rather than the trend so far.

With ten teams and twenty drivers, all charged up and waiting eagerly for the five red lights to illuminate, we wait as anxiously to see the electric cars actually accelerate from their grid and fight it out from first corner itself. The presence of Mahindra racing team, with Karun Chandhok and Bruno Senna at the helm is adding fuel to our excitement. Will the series stand out, or will it get electrocuted into oblivion even before it starts to electrify the air? Come September 13 and we will see.