"Would have, could have, should have - nowhere, and the least of all in motorsport - does it matter."
- Nick Heidfeld

It's strange to walk through the Formula E paddock in Berlin. A week ago, this very spot had been a parking lot. A place where people who were about to go shopping in Berlin's famous Alexa Mall, or visit the Fernsehturm - Berlin's iconic TV Tower - would park their cars and crossover to Alexanderplatz. Today, the Thursday before the Berlin ePrix, things have transformed. There are barriers that cordon off the area that's being used as the paddock, and a row of white tents have cropped up that serve as garages for each team. Traffic still trundles past just beyond the barriers. On Friday, the fence that separates the paddock from the pit lane will be removed, and traffic will be blocked so that cars can go out on track for the shakedown and drivers can learn the track. For the teams competing in the series, it's a tricky business, moving from temporary track to temporary track. For the logistics crew responsible for converting the road to track, and the track to road, while being watched closely by Berlin's ministry of transportation, things are even trickier. Deadlines are short and must be met no matter what. Such is the world of the temporary street circuit. Raced on today, and, if all goes according to plan, forgotten in a haze of traffic tomorrow. 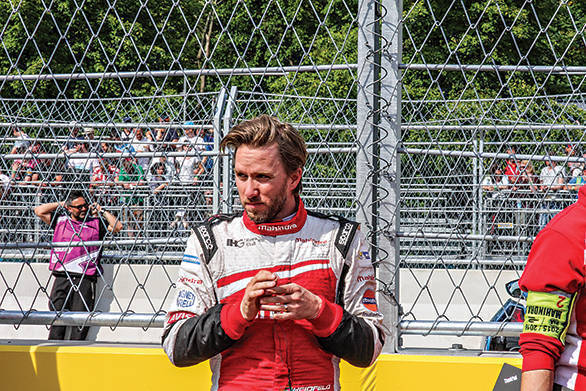 Nick Heidfeld's contribution to the Mahindra Racing team has been significant, something the team readily acknowledges

On the Friday morning before the race, I'm sitting on one of the cement blocks that forms a part of the border of the pit lane. The barriers are being removed so that the cars can now leave the garage and drive right out onto the pit lane and from there onto the racetrack. I'm waiting for Nick Heidfeld to show up for an interview. Heidfeld, as you can imagine, with his wealth of experience in Formula 1 and sportscar racing, is one of the most sought-after drivers in the Formula E paddock. Nabbing an interview with him has been hard, but, as I discover, well worth it. Of course, when I first catch sight of the Mahindra Racing driver walking towards me for our interview, it's impossible not to think back to that first ever Formula E race in Beijing. The one that ended so badly for him, when he was racing for Venturi. The one that ended with him
"Upside down!" Heidfeld says laughing. It's something of a mixed memory. One that's tinged with some amount of sorrow because he could have been the first-ever race winner in Formula E. After all, he'd just been about to overtake Nicolas Prost in the very last corner of the very last lap of the Beijing ePrix, when Prost closed the door on him, causing both to crash and retire. But Heidfeld is also quick to point out that there was some benefit to that scary crash that he was lucky to walk away from unharmed. "This image went around the world and put Formula E on the map." It's true of course. That last lap really did it for Formula E. It proved that it made for exciting racing, which was important for fans and for the drivers and everyone else involved in the sport.

View from within the Mahindra Racing garage during the Berlin ePrix

On Saturday, when I'm watching the Mahindra Racing team in action from within their garage during the race, I'm able to sense some of this excitement. Of course, there are tense faces and heads being shaken grimly when Bruno Senna loses his wing on the first lap of the race. And there's a flurry of activity when he comes into the pits to replace the front end of the car. But it's nothing compared to the tension and proper excitement when the drivers come into the pits to swap cars. It's like watching a machine suddenly come alive and go from zero to 100 in less than three seconds (which, incidentally, Formula E cars are capable of). Heidfeld is in first, hopping from one car to the other, being strapped in properly, and then heading back out on track. It reminds me a little of a Le Mans start, minus the dash to the racecar. Heidfeld has been picking his way up the order, from down in 16th place on the grid. Disappointing, especially since the team had proved that they had the pace to do well in Berlin, with both drivers making it to the Superpole shootout, and qualifying fourth and fifth, before a penalty for incorrect tyre pressures relegated them to nearly the back of the grid. Then it's Senna's turn for the car swap. It goes well. Very well. In fact so well that I see one of the mechanics do a little jig and pump his fists in the air. 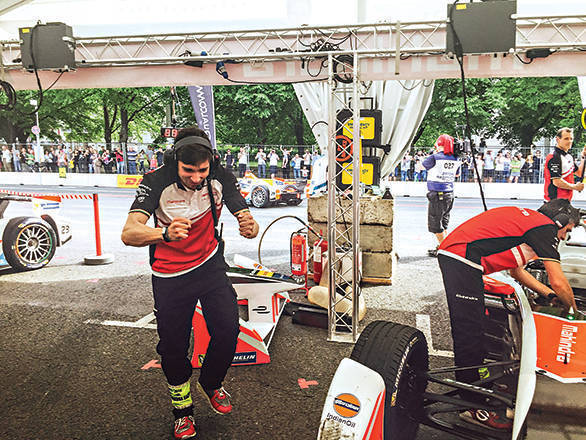 And it's this sort of excitement that the series provides that made so many drivers, Heidfeld included, gravitate towards the championship. He tells me that the rumours that an all-electric series of motorsport would begin at some point had already piqued his interest back in 2013. And when he heard of the possible teams involved, the circuits that they'd race on and the drivers who were likely to compete in the series his interest grew. Then there was the fact that even while the series was slower than Formula 1, which is something that bothered a lot of people, there were other aspects to the racing that he liked. 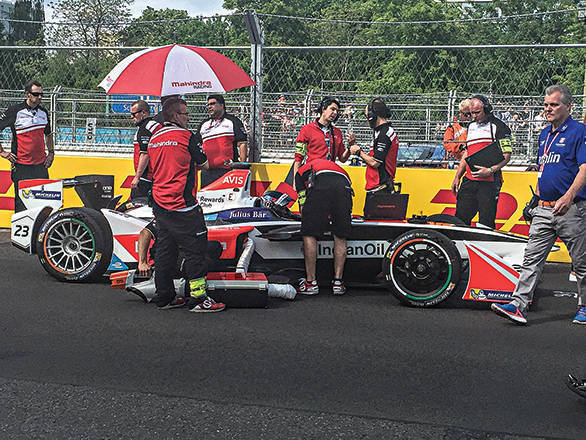 On the grid before the race, the Mahindra crew makes sure everything is ready for Heidfeld

"The cars are easy to control, the throttle and response is direct, better than in any internal combustion engine I ever drove. And driving any car on the limit is challenging, especially on street circuits which are very different."
Which is why, after one season in Formula E, Heidfeld decided that he'd continue for a second season, switching from Venturi to Mahindra. It was, in his own words, not an easy decision. But the team principal of Mahindra Racing, Dilbagh Gill, made a sound case. "When I spoke to Dilbagh, he analysed it quite well, what the issues were and he explained to me what the plans were for the future and for Season 3," he says. And while Heidfeld and the team haven't yet signed for the third season, he believes that the team will make progress. And of course, he's in talks with them too. 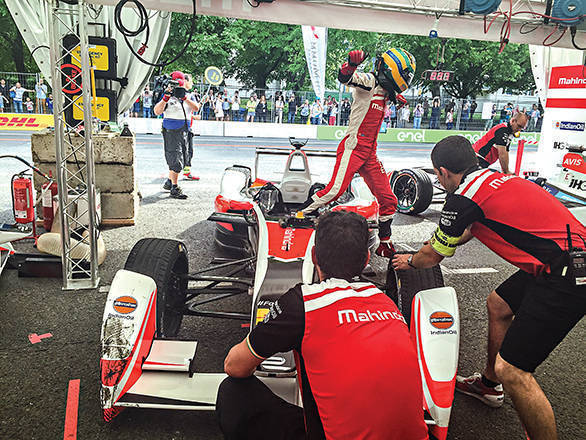 In Berlin, Heidfeld is home hero. Fans are walking past taking photos of him as he sits before me cross-legged on the cement block, reminding me a little of Obi-Wan Kenobi minus the robes. And it isn't just the beard that's doing it. He's actually got some very insightful things to say about life and motorsport. Like when he tells me that he rationalises his decisions, such as the ones that involve switching teams. But that he also relies on instinct. And he's got an interesting definition for it too. He says, "The gut feeling is also your body looking at all the memories you made in your life, inside your head."

This combination of mind and gut has today led Heidfeld to the Mahindra Racing team. And in the past, in Formula 1, it's seen him hop from Prost to Sauber to Williams to BMW Sauber  the team with which he believes he had his best season in the sport. And it's also seen him take to endurance racing with Rebellion Racing at Le Mans. In Formula 1 though, he's managed to acquire the dubious distinction of being the driver who has racked up the most podiums without a win. But these decisions aren't something he regrets. Like he says, "Hindsight is a nice thing. It would have been nice to be with a world championship winning team, but it's also a bit of a lottery." With two podiums in Formula E, of course Heidfeld is hoping that this statistic doesn't follow him here as well. He acknowledges that a win for Mahindra Racing in Season 2 (with just the London ePrix left) is impossible. In Season 3, things could be different though. 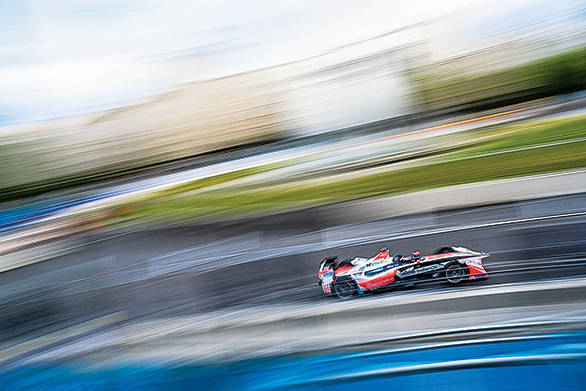 Nick Heidfeld in action at the 2016 Berlin ePrix

Standing in the Mahindra pits during the Formula E race, there's one thing that I realise. Of course winning is the only thing that matters, and a team is as good as its performance on track. But statistics and podium places are only part of the measure of growth. There's no way to accurately measure a team's learning. And over the course of the two years that they've been a part of Formula E, Mahindra Racing has learned a lot. It goes beyond just working with the powertrain, and timing pit stops and car swaps to nanosecond accuracy. It extends to learning how to be the most energy-efficient team on the grid, learning to pick the right driver for the job of testing and development, and a willingness to correct previous mistakes. This, coupled with hard work, which the team certainly doesn't seem to be afraid of, and their target of not being there just to make up the numbers ought to be met. Sooner rather than later. Although Heidfeld laughingly says that "Sooner is always better!"

According to Dilbagh Gill, Heidfeld has brought a level of precision, which the team appreciates, to the table. According to Heidfeld, the fact that the team isn't in Formula E just for a season and has the patience to see things through is a good sign. "The team has done as I expected. It's never perfect. I am not perfect; the team is not perfect. I've learned that it's easy to think everything is perfect elsewhere. I've never been to a team where I've thought that everything was perfect," he says. 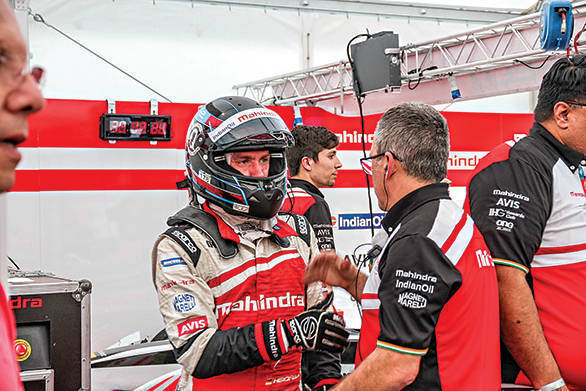 I suppose that the willingness to chase after perfection must then be the goal. An exercise that keeps one sharp and eventually gets one to those long sought-after goals, even if perfection itself is unattainable.

The Berlin ePrix, then, is one such exercise. Heidfeld finishes seventh. Senna finishes 15th after a tough race, broken wing and spin included. The Mahindra Racing team looks set to retain their fifth spot in the championship.

Heidfeld is philosophical after the race. "You make your own luck," he says of the low tyre pressures that led to them being handed grid penalties before the race. "Sometimes there are things that you cannot influence, but I also believe in positive thinking," he smiles. But there's no denying that if they'd managed to start in the original positions, fifth and sixth, a podium wouldn't have been unthinkable? But he grins and repeats those words once again: "Would have, could have, should have - nowhere, and the least of all in motorsport - does it matter."