Fishing trip in a Tata Venture

I'm sitting by the riverside, fishing rod in hand, gazing anxiously to see if any unsuspecting fish has made the mistake of nibbling on the piece of atta that I was using as bait. Once. Twice. The third time I was on my feet ready to strike. I pull up on the rod and start reeling in my catch as the hapless fish tries to break away from my line. I can feel it struggling but I keep reeling it in. I finally see my catch break the surface of the water. I proudly reel it in and triumphantly look at my trophy. All four inches of it. Suddenly I'm surprised that there is nobody else celebrating in my triumph. I distinctly remember arriving with four other people  Alan, Halley, Rishaad and Alan's uncle Terry. I turn around and realise that while I was busy reeling in my prize catch, Alan was busy reeling in his catch of the day. Only, his fish was almost six times the size of mine. I quickly mumble something along the lines of the only thing bigger being his fish and walk away to the Venture and sulk. When we decided to go on a fishing trip to Islampur in the new Tata Venture, I had dreamt of catching fish the size of Moby Dick's left fin, not of being outdone by my colleague who it turns out was quite the ace at fishing. 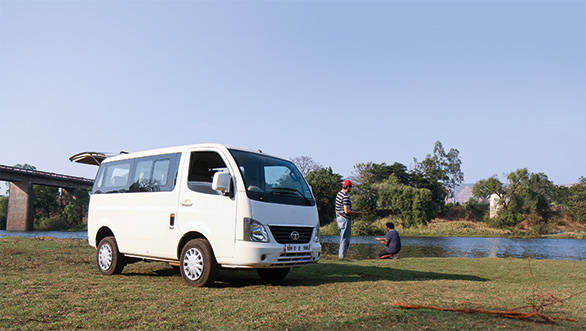 The Venture was happily doing speeds of around 110kmph and this is where it is at its best. Push it
beyond these speeds and the vehicle becomes a tad scary to drive

We had been planning to go fishing for a while and the seven-seater Venture arrived right on cue. Yup, the Venture might not look like it but, it seats seven fully grown adults with relative ease (it also comes with optional five- or eight-seater layouts). I say relative, because the third row is a bit of a squeeze for most people. Only the left passenger can stretch out, since he is not inhibited by a seat in front of him. But since the last row was used by us primarily for our fishing gear, we had nothing to worry about except for soiling the interiors. 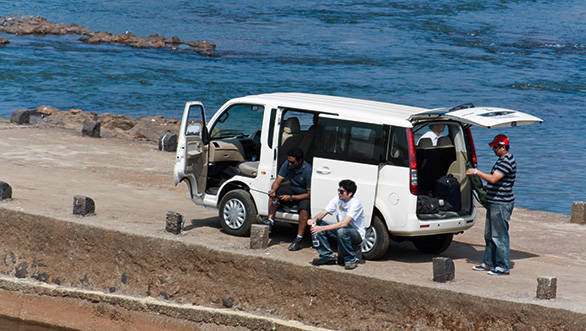 The interiors of the Venture have an upmarket to feel to it. Seriously. The materials are the best from among Tata's small-car parts bin with the interiors swathed in beige. The seats, well actually, the seating however is rather odd. The front seats are mounted directly on top of the suspension struts and that brings memories of my uncle's Maruti Omni rushing back. The Omni, by the way is Maruti's third highest selling model, which should explain why Tata wants a piece of this pie. The seating in the Venture is almost truck like  high up with the steering wheel at a very horizontal angle. The truck-like quality is there in the ride too, which is quite harsh. However, the bone jarring-ness of the Venture's commercial vehicle sibling  Super Ace, has thankfully not made it to the Venture. The Venture carries forward the family genes in the way it looks as well. The front is almost the same as the Super Ace but with the chrome bits adding some flair to it. From the sides the vehicle is quite plain to look at with the wrap around treatment given to the windows lending some character to it. The rear is typically Tata with the signature tall tail lamps, which by the way stopped working half way to Islampur. 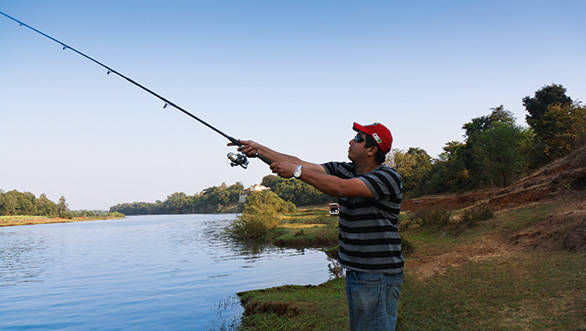 Alan was reeling in his catch of the day

We had left Pune early in the morning and it took us around four hours to drive the 200 odd kilometres to Islampur. Islampur is a few kilometres off NH 48 and we were fishing a bit further away next to the Koyna river. On the way, the Venture was happily doing speeds of around 110kmph and this is where it is at its best. Push it beyond these speeds and the vehicle becomes a tad scary to drive. Imagine everytime you brake hard the entire rear end (which is not too heavy to start with anyway) becoming superlight and starting to wave around. Then imagine this happening when you're cornering at highway speeds feeling like the entire vehicle is getting ready to tip over. It won't, but the high seating and body roll make it seem like it will. This makes overtaking at high speeds a bit hairy. Combine this with the very narrow power band you have to play with and you'll be left muttering a quick prayer everytime you're faced with slow moving traffic. The 1405cc turbocharged diesel engine makes 71PS at 4500rpm and 135Nm at 2500rpm. However, till the engine reaches around 2500rpm, there is an absolute lack of power and once you hit 3500rpm the power makes a quick exit. In real life, this translates to more gearshifts and more driving fatigue. If squeezed for all its worth, the car will to 0-100kmph in a yawn-inducing 29.3 seconds with a top whack of 126kmph. This meant that our journey would not be as long as we had expected it to be. 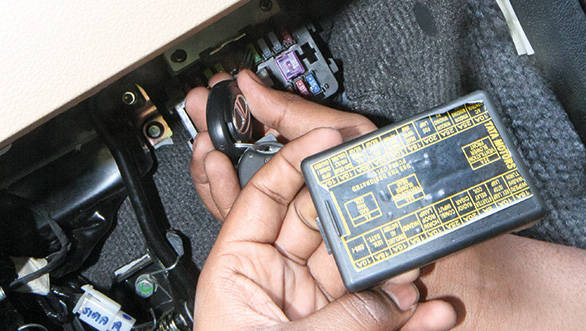 Despite all our tomfoolery en route we made it to Islampur by around 2 pm that day. There was one problem however. By the time we reached our campsite, our entire centre console too had conked off. This meant there were no tail lights and no AC. Worse still, there was no music! Thankfully we soon narrowed it down to a blown fuse, which was rectified without any delay. And then we got on to the main programme for the day. 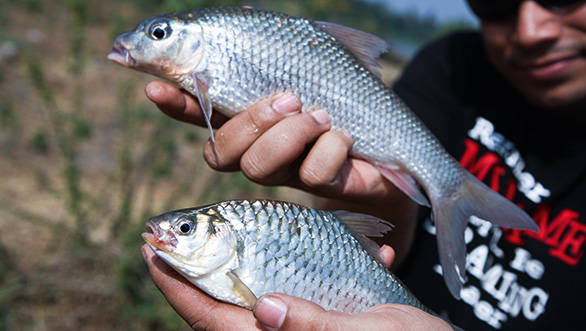 Alan was quite the expert in fishing, having caught six of them during the trip

So here we were trying to outdo each other at something completely new to all but two of us. For those who do not have the immense patience this activity requires, fishing can get boring pretty fast. Mostly because fish don't just magically trap themselves on your hook, wave out and ask you to reel them in. Halley and Rishaad promptly gave up. Rishaad picked up a net and started waving it around in the water to better his luck while Halley resorted to lying down on the grass and taking pictures of the clouds. Meanwhile I had a point to make. I wanted to prove that I was better at fishing than Alan. Turns out I was not. As the day progressed I caught one fish. And that one too got away before I could reel it in. I did learn one thing though - fishing takes a lot of patience and practice. And I had very little of both. So I had to settle for watching Alan catch fish after fish while I cast my line over and over without any success. After a day of this, we decided to retire to our tents to get some rest before we tried again in the morning. 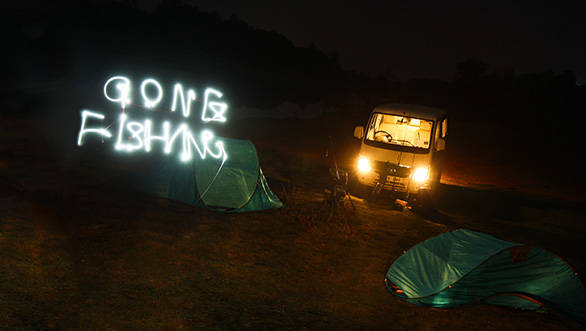 After a day of fishing, we decided to retire to our tents to get some rest before we tried again in the morning

The next day didn't bring any better luck. So I promptly packed our bags and loaded up the Venture (which I must mention is not a lot if all the seats are up). While the whole 'adventure' bit of it was about fishing, we soon ran out of praise for all the fish we had caught. Especially considering we had caught just six of them in two days. So we began talking about the Venture. And turns out none of us had any complaints even after 600km with it. For a car that is priced at Rs 4.52 lakh for the base CX and Rs 5.56 lakh (both ex-showroom Mumbai) for the high end GX (which comes loaded with a music system, chrome trim, front power windows, wheel covers and more) that speaks more about the kind of car the Venture is than any regular road test could. 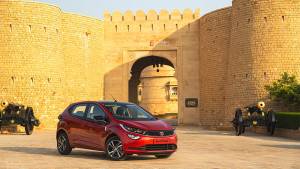